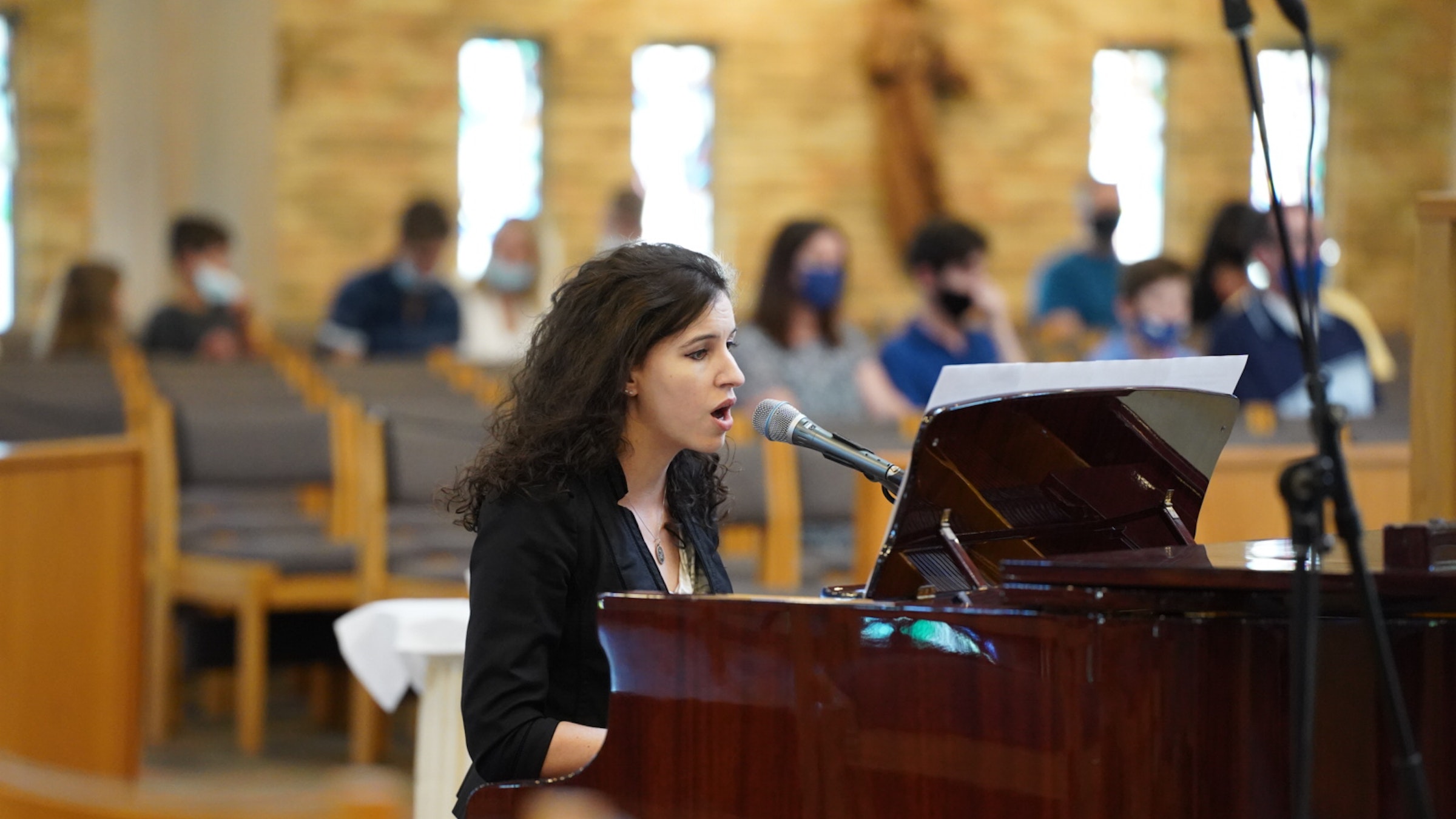 Sarah Dudek, music minister at St. John Vianney Parish in Shelby Township, has resorted to using antiphons, an ancient form of music in the church which encourages the congregation to listen and reflect rather than sing. The Archdiocese of Detroit’s Academy of Sacred Music has composed and collected antiphons which musicians across the archdiocese can use as Mass settings which discourage singing. (Photo by Valaurian Waller | Detroit Catholic)

With congregations discouraged from singing because of COVID-19, music directors re-introduce one of the Church’s oldest forms of worship

SHELBY TOWNSHIP — When public Masses resumed May 19, it was music to many Catholics’ ears.

Even still, the music at Mass these days just doesn’t have the same sound.

Among the safety precautions parishes have taken in light of the spread of COVID-19 has been the removal of hymnals from many pews and the discouragement of singing from the congregation, which health experts say can spray respiratory droplets farther than ordinary speech.

The change has forced parish music directors to get creative.

“It’s a little complicated at this time; there is still so much we don’t know about the coronavirus and how it spreads,” Sarah Dudek, music minister at St. John Vianney Parish in Shelby Township, told Detroit Catholic. “Research indicates the primary form of contagion is through droplets of aerosol we admit when we speak, cough, sneeze or sing. So even though we have people spaced out and wearing masks, we can’t have singing to decrease the chance of spreading droplets.”

To discourage congregations from singing, parishes have ceased using well-known hymns, and turned instead to an ancient solution: antiphons, or short sentences traditionally sung or chanted by a cantor of choir, common in an era before pew hymnals.

The Archdiocese of Detroit’s Academy of Sacred Music, a group of 10 music directors and two priests who collaborate on projects involving music and liturgy, have come together to compose antiphons in various styles to be used by music ministers across the archdiocese.

“In response to some studies that singing has a particular poignancy in spreading COVID-19, we’ve found a way to have the congregation participate fully in music while not having them sing,” said Joe Balistreri, director of the Detroit Archdiocesan Chorus and the Archdiocese of Detroit Academy of Sacred Music.

Traditionally, antiphons are unique pieces of music designated for a specific week or Mass in the liturgical calendar, with antiphons assigned for the entrance, offertory, Communion and post-Communion.

“Before Vatican II, most of these antiphons were Gregorian chant,” Balistreri said. “Since Vatican II, composers have written settings. We thought there was an opportunity to do something with Detroit flavor that our members could offer to music directors for free for use in their parishes.”

Even if people in the pews aren’t familiar with the text of the antiphons, the accompanying music should have a familiar tune, Balistreri said.

“Our hope is that it doesn’t change the mood of Mass; that’s why we’re writing our own settings, to make it familiar to what people are used to,” Balistreri said.

For example, Kier Ward, organist at Sacred Heart Parish in Detroit, has composed antiphons incorporating Gospel-style music into the liturgical text. The tune feels authentic to the predominantly African-American parish, while helping parishioners contemplate the Scriptures.

Listen to the antiphons

“It was fun composing these antiphons, setting the text to Gospel-style music,” Ward said. “You get the words, and you let it set in the Spirit. You let it work in for a while, sitting at the piano, until you get something that flows, and the Holy Spirit is really working through you to get it done. I’m extremely excited about this project and getting more musicians involved.”

Balistreri said the different musical settings should remind hearers of the timeless nature of the texts, which convey a universal Gospel message.

“We speak these ancient texts through our own interpretive languages,” Balistreri said. “It reminds me of Pentecost, where everyone hears the same message, but in their own language.”

The Academy of Sacred Music is focusing on the propers — the parts of the Mass that change week to week — for now. Dudek said while it’s great for musicians to discover — or rediscover — the ancient texts and incorporate them into the Mass, having the choir and cantor take over the singing does take away a certain sense of the faithful’s participation.

“The challenge to the average parish music director is we’ve been hymn-dependent for several decades,” Dudek said. “We haven’t used antiphons at Mass as much because we wanted the congregation to sing. Now, the focus is not so much to discourage singing, but to encourage listening.”

Dudek has been introducing antiphons at St. John Vianney for a while, but given the circumstances, it’s sped up the process a bit.

“Now is a good time for quiet in the liturgy, a good time for meditation and contemplation,” Dudek said. “Fortunately, antiphons and propers really aid parishioners with that.”

At Sacred Heart, antiphons present both a challenge and opportunity in involving the congregation in praise and worship, Ward said, since “call and response” is such a vital part of African-American worship.

“With call and response, everyone is part of it, and by not having that, it is definitely different,” Ward said. “But we still work and worship in prayer, and we still see God in all we are doing.

“As long as the music is upbeat, the congregation can still clap, even though they aren’t singing along,” Ward added. “They are tapping their feet, shaking their head about it; they are still involved, still in it. In Gospel, you have pieces that are more meditative as well.”

Antiphons have been part of the Church for centuries, so their introduction at Mass is hardly considered a “new development.” But it is an opportunity for a new generation to become acquainted with one of the Church's “best kept secrets,” Dudek said.

“I find these texts to be beautiful, meditative and so focused on the theme of the liturgy of the day,” Dudek said. “We hear phrases, specific parts of the Gospel repeated, so people get to chew on that, and different highlights of the Scripture are woven through the hymn. The Mass is a journey from beginning to end.”

The Academy has placed the antiphon texts and settings online for any music minister in the archdiocese to access, along with an explanation of how to use them. Balistreri said he has received dozens of inquiries, along with words of gratitude. To learn more, email [email protected].