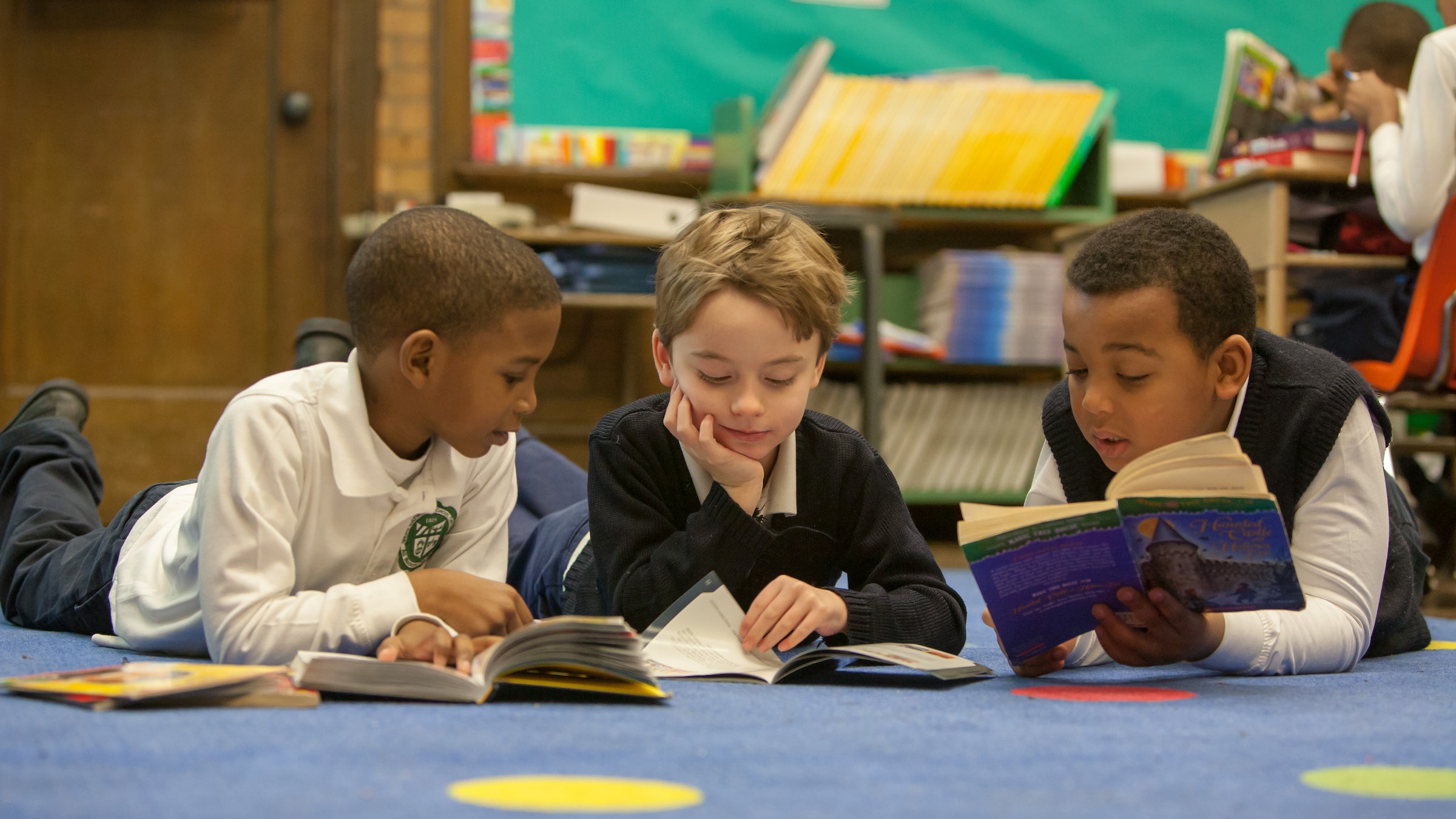 Students study at Gesu Catholic School in northwest Detroit. Thanks to an endowment fund created by two alumni, Ed Parks and the late Don Bridentstine, Gesu students will benefit long into the future. (Photos courtesy of the Catholic Foundation of Michigan)

The following story was originally published on the website of the Catholic Foundation of Michigan.

DETROIT — Don Bridenstine has been gone for two years, and his widow Eileen still misses her husband of 56 years every day.

But for Eileen, life is a little sweeter knowing her husband’s legacy lives on through an endowment he founded with his friend Ed Parks to benefit Gesu Catholic School, the men’s alma mater.

“Don loved Catholic education. His father instilled that in him,” said Eileen, mother of five children, all of whom attended Gesu in the 1970s. “He had a very special feeling for Gesu. That’s one of the reasons he got involved with the (Catholic) Foundation (of Michigan), and it’s why I am still honoring him by sending money every year for the school and the endowment.”

Ed Parks graduated with Bridenstine in 1953 from Gesu.

“Don and I first met as kindergartners at Gesu. We continued on at U of D High, where our friendship intensified,” said Parks, a retired partner with Plante Moran. “Don went to Notre Dame and I went to John Carroll, but we ended up together at the University of Michigan’s graduate school of business. He went on to his career in the automotive industry, and I went to mine. Don began volunteering at Gesu, and we reconnected.”

Bridenstine and Parks got talking about the importance of Gesu and decided to partner with the Catholic Foundation in 2018.

“We realized we could solicit some of the Gesu alumni we know who might be interested in giving to a permanent fund, the income of which could be used by the school,” Parks said.

“One benefit of having an endowment with the Catholic Foundation is that people can make contributions to it while they are alive,” added Ed, who serves as advisor to the fund, as did Don before his death. “They can also designate it in their wills if they wish.”

The endowment funds are administered by the Foundation, which makes annual distributions to the school.

Started with $10,000 a few years ago, the Gesu Catholic School Alumni Endowment Fund has already grown to $70,000. The beauty of an endowment like the Gesu Fund is that anyone in the community can make a contribution to honor or memorialize someone they love.

Pat McKeever, a close friend of Bridenstine’s with no direct ties to Gesu, felt called to support his old friend in this special way.

“Don was always close with Gesu,” McKeever said. “I wanted him to get recognition for doing something many others who have gone to Gesu could have done but have not. It’s been a real joy to be able to do this with Don and Ed.”

McKeever loves how easy it is to give and invites others to consider the benefit of utilizing a required minimum distribution in such a meaningful way.

The Catholic Foundation brings good news “for anybody interested in helping families living in the city to have a choice of a faith-based grammar school,” Parks said. “There are so few remaining in the city and so it’s essential to support these schools. If you are an alumnus or alumna of a faith-based school and can support them financially, it’s almost a responsibility.”

In addition to educating more than 200 students each year, “Gesu is an anchor,” Parks added. “Gesu helps the community, opening its building and playground to its neighbors. Giving to the endowment held by the Foundation is a way to enable young children to have a choice, and a way to help the city.”

It’s gratifying for Eileen to see the endowment prospering.

“Don took great pride in being one of the first to support it,” she said. “He was very happy to see his friends contributing to Gesu. These guys really valued the friendships they formed in the early years of their education. We are knee-deep in our Catholic faith, and it goes back many years.”