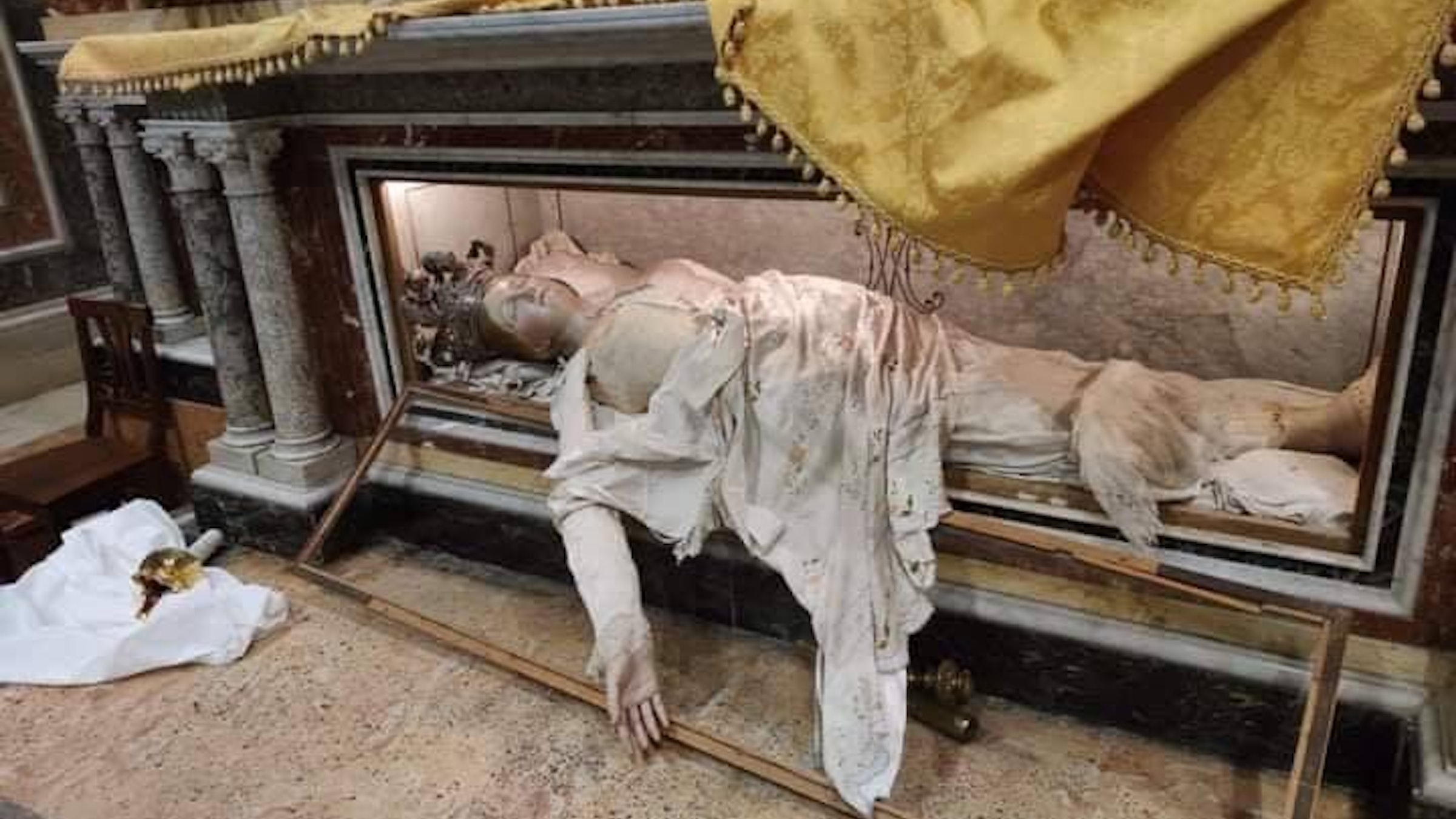 An image circulated online depicts a statue of the Blessed Virgin Mary’s dormition damaged after vandals broke into the Church of Sant’Agata al Collegio in Caltanissetta, Sicily. (via Twitter)

ROME (CNA) -- This week a relic of St. Pope John Paul II was stolen from a cathedral in central Italy, while a church in Sicily was also robbed and the Eucharist desecrated.

A gold reliquary with a relic of the blood of St. John Paul II was discovered to be missing from a chapel of the Cathedral Basilica of Spoleto on the evening of Sept. 23, according to the Italian daily L’Avvenire.

In a video message Sept. 24, the archbishop of Spoleto said he received the news of the theft with sorrow.

Archbishop Renato Boccardo asked the perpetrator to “return and restore the relic to the cathedral. What I am asking is a gesture of responsibility and seriousness.”

The relic was a gift from the archbishop of Kraków to the Archdiocese of Spoleto-Norcia in 2016. The archdiocese planned to move the relic to a new church in honor of the Polish saint on Oct. 22. This year the Church is marking the 100th anniversary of St. John Paul II’s birth.

The relic was, in the meantime, being displayed for veneration in the chapel of the crucifix, which is enclosed by a gate.

“It’s a serious act,” Boccardo said. “Serious, naturally, because it wounds the sentiments and the devotion of many people” who come to the cathedral to ask for the intercession of the saint before his relic.

“Meanwhile, I exhort the many devotees of St. John Paul II to continue to entrust themselves to him, who is a powerful intercessor before the Lord,” Boccardo added.

In the early morning hours of Sept. 22, the Church of Sant’Agata al Collegio in Caltanissetta, Sicily, was also broken into and robbed. Statues were damaged and the tabernacle was opened and Eucharistic hosts thrown on the ground.

Although some images circulating online appeared to show the incorrupt body of St. Agatha herself damaged, most of St. Agatha’s remains are interred elsewhere, at the Badia di Sant'Agata in Catania, Italy. Shown in the images was actually a figure representing the Blessed Virgin Mary’s dormition, which was damaged.

Police arrested two men, and are looking for another man and woman, in connection with the crime.

According to local reports, the police believe the two men broke into the 17th-century church through an adjoining library and music school. While searching the men, police found a gold brooch, a case with consecrated Eucharistic hosts, a bottle of holy oil, and coins from the library’s vending machines.

Inside the church, the candlesticks from the altar were found hidden behind a door and the glass encasing the figure of the Blessed Virgin Mary’s dormition was shattered and the figure’s arm broken.

This is the second time the Church of Sant’Agata al Collegio has been broken into since August.

At the time of the Aug. 23 break-in, Fr. Sergio Kalizah, the church’s pastor, said that the thieves had “damaged everything” inside the church, but gratefully had not touched the tabernacle, La Sicilia reported.

“I ask you, dear brothers, to support us with your prayers,” the priest said.