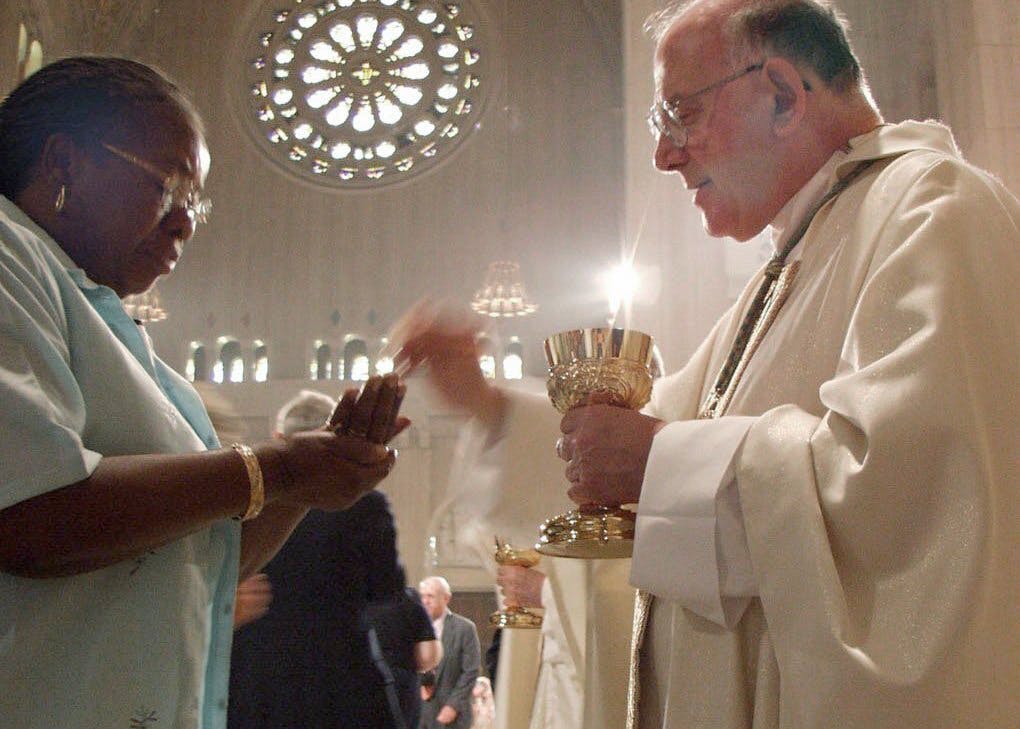 In this 2002 file photo, a woman receives Communion during a special Mass marking the first Eucharistic Congress of the Knights of Columbus at the Basilica of the National Shrine of the Immaculate Conception in Washington. On June 16, 2022, the feast of Corpus Christi, the U.S. bishops' three-year eucharistic revival begins. It culminates with a eucharistic congress in 2024 in Indianapolis. (CNS photo by Andy Carruthers, Catholic Standard)

WASHINGTON (CNS) -- The U.S. Catholic Church's three-year eucharistic revival about to get underway "is not a program but a movement" that is an invitation to the faithful from God to go on mission and be compelling witnesses of our faith, said Tim Glemkowski, the newly named executive director of the National Eucharistic Congress.

"We the church have to be clear about telling our story, getting to the core" of our faith, that "God is not just some distant someone who is not engaged," he told Catholic News Service April 5. "He's alive and real and can be encountered in the Eucharist, source and summit of the faith. ... This is where God is with us."

The first year will get underway at the parish and diocesan levels with initiatives such as eucharistic adoration and processions, the development of parish teams of revival leaders and conferences on the Eucharist.

The following year there will be regional revival events, leading to the eucharistic congress in Indianapolis in 2024, the first to be held since one took place in 1976 in Philadelphia. It is expected to draw at least 80,000 from across the country.

The U.S. bishops approved plans for the revival and the congress last November during their fall general assembly in Baltimore. Both are being spearheaded by the U.S. Conference of Catholic Bishops' Committee on Evangelization and Catechesis, chaired by Bishop Andrew H. Cozzens of Crookston, Minnesota.

As chairman of the board of the National Eucharistic Congress Inc., Bishop Cozzens announced Glemkowski's appointment April 4.

"Tim is a real leader with a heart on fire for Jesus Christ and a desire to invite people to encounter his love in the Eucharist," Bishop Cozzens said in a statement.

"He brings a unique blend of skill sets to this important role -- from strategic vision and operational excellence to theological insight and a missionary mindset. ... He lives and breathes the call of Pope Francis for a pastoral and missionary conversion of the church," the bishop added.

National Eucharistic Congress Inc. was instituted earlier this year, and a national search was conducted for an executive director to lead the newly established entity.

"God is doing something important in his church through this multiyear national eucharistic revival," Glemkowski said in a statement after his appointment was announced. "At its core, I believe the congress is a critical moment for how we fulfill Pope Francis' vision of becoming a more missionary church."

He added, "It is the fire of charity, born in our hearts from the reception of Jesus in the Eucharist, which impels us on mission. This is a phenomenal opportunity for our church to draw closer to Christ and to be prepared to better share him with our postmodern world."

Until he was chosen for his new position, Glemkowski had been working for the Archdiocese of Denver in evangelization and strategy. Before that, he was founding president of the Chicago-based L'Alto Catholic Institute, which works with parishes to meet "the challenges and opportunities" of the new evangelization.

A native of the Chicago area, Glemkowski has a bachelor's degree in philosophy and theology from the Franciscan University of Steubenville, Ohio, and a master's in theology from the Augustine Institute in the Denver Archdiocese.

He and his wife, Maggie, have three children, ages 6, 4 and 1. They are members of Light of the World Parish in suburban Denver.

"The heart of Vatican II is the universal call to mission, to holiness. All of us are called to give our entire lives to Christ and surrender to God and go on mission," he told CNS April 5. "It's not optional ... baptism is an invitation calling for each of us" to step up and share the joy of Christ and our faith with others.

He sees the revival and the congress as "a milestone moment" for the church and also "a generational moment" that can really change lives.

Glemkowski said that as a lay consultant to the USCCB Committee on Evangelization and Catechesis, he has been "engaged and involved with the genesis of (the) project for a while," and when he watched via livestream Bishop Cozzens' Nov. 17 presentation to the bishops, "I felt God moving my heart and I wanted to be a part of it."

So he applied for the spot as executive director and said he is "humbled and honored" to be appointed.

In his presentation and later in interviews, Bishop Cozzens said the Catholic Church can deepen the faithful's understanding of the Eucharist with the revival and the congress by remembering that Christ said a lighted lamp does not belong under a bushel basket.

"Set it up on a hill so that people can see it and be attracted to it," the bishop said. "And I think that's what we want to do with our teaching on the Eucharist."

Glemkowski noted that "the original vision" for the revival began to be discussed when Auxiliary Bishop Robert E. Barron of Los Angeles was the bishops' evangelization chairman, shortly after the results of a 2019 Pew survey showed just 30% of Catholics understand the real presence of Christ in the Eucharist.

Bishop Barron also is founder of the Catholic evangelization organization Word on Fire.

In the Pew survey, 69% of all self-identified Catholics said they believed the bread and wine used at Mass are not Jesus, but instead "symbols of the body and blood of Jesus Christ."

The results struck a nerve with many U.S. bishops, who saw a catechetical crisis in this lack of fundamental understanding about the Eucharist.

Bishop Kevin C. Rhoades of Fort Wayne-South Bend, Indiana, chairman of the bishops' Committee on Doctrine, which drafted the statement, also said the document was meant to be a theological contribution to the bishops' upcoming eucharistic revival "by providing a doctrinal resource for parishes, catechists and the faithful."

In addition, the Notre Dame Center for Liturgy at the University of Notre Dame's McGrath Institute for Church Life has launched a new initiative for 2022 on fostering a eucharistic culture in parishes, schools, and dioceses as a way of promoting deeper affiliation with the church.