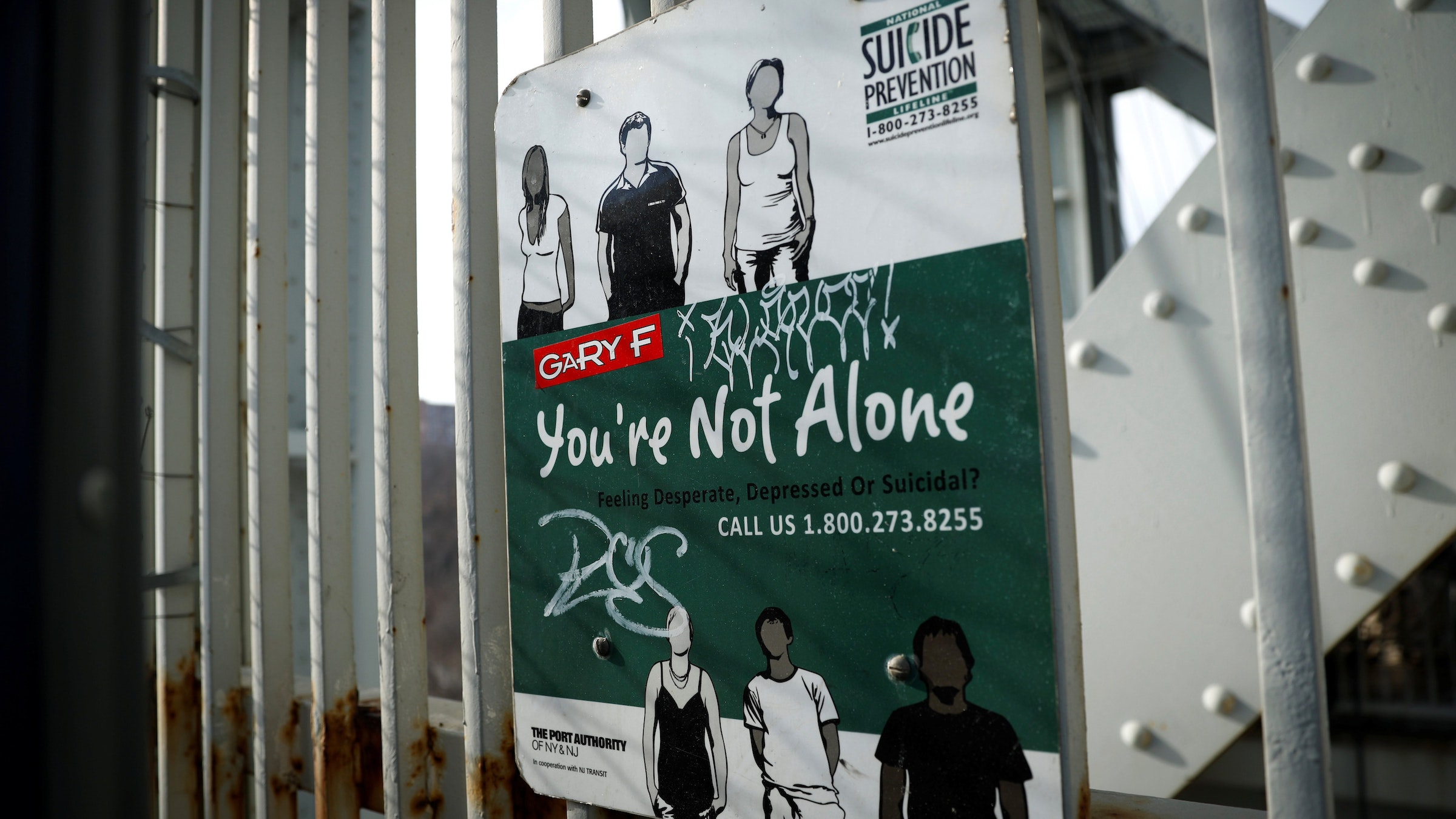 A suicide prevention sign is pictured on a protective fence on the walkway of the George Washington Bridge between in New York City Jan.12, 2022. The suicide epidemic in the U.S. is costing lives, and Catholic dioceses and ministries are racing to get in place much needed accompaniment for those crying for mental health help. (OSV News photo/Mike Segar, Reuters)

WASHINGTON (OSV News) -- During the six months following the national 988 Suicide & Crisis Lifeline launch in July, more than 2 million calls, texts and chat messages have streamed into its 200 call centers coast-to-coast, the Associated Press recently reported. As suicide continues to be a leading cause of American deaths, Catholics may also turn to their church for spiritual support in the midst of a mental health episode -- but dioceses are discovering they need to sprint to catch up and keep pace with this deadly epidemic.

"This is a brand new ministry in the church," Deacon Ed Shoener, president and founding member of The Association of Catholic Mental Health Ministers, told OSV News. "And I think it's growing fairly rapidly for a new ministry like this, in a very ancient institution."

While some dioceses have staff therapists and counselors that are mental health professionals, through organizations such as Catholic Charities or Catholic Social Services, Deacon Shoener categorized those services as "professional mental health care" as opposed to "mental health ministry."

An essential distinction, according to The Association of Catholic Mental Health Ministers, is that mental health ministry is not the same as mental health treatment, but it is complementary to the work of mental health professionals. Ministry takes the form of faith-based, God-centered and trained volunteer-led journeying with those experiencing mental wellbeing challenges, "without direct implementation of psychological interventions."

Mental health ministry is spiritual and social support -- not medical diagnosis or care -- for those suffering in their mental health. And it's a field that's growing.

"I would say about 40 dioceses or so across the U.S. have some level of mental health ministry," Deacon Shoener said, adding these efforts are generally "either being organized at a diocesan level out of one of the offices of the chancery, or a couple of parishes on their own have started to offer a mental health ministry."

There are 194 territorial dioceses and archdioceses in the U.S., not including the Archdiocese for Military Services USA and the Ordinariate of the Chair of St. Peter.

The need for mental health ministry is acute. According to the U.S. Centers for Disease Control and Prevention, suicide was responsible for nearly 46,000 American deaths -- one about every 11 minutes -- in 2020. Another 12.2 million American adults seriously thought about suicide, 3.2 million made a plan, and 1.2 million attempted suicide. The National Alliance on Mental Illness indicates that one in five U.S. adults experience mental illness each year, while 17% of youth (6-17 years) annually experience a mental health disorder.

"Mental health in the church: It's not a problem of supply, it's a problem of demand," said Wendell Callahan, the executive director of the Catholic Institute for Mental Health Ministry at the University of San Diego, which the university established after receiving a 2019 grant. "You have many, many people in the pews sitting there dealing with mental health issues," Callahan shared, "and not coming forward seeking help."

"Nobody has any concerns asking for prayers -- or even individual accompaniment -- dealing with a cancer diagnosis, for example," he said. "But if it's schizophrenia, or major depression, or PTSD, then the stigma pops up. And the shame around that. And that's what we really need to work on -- reducing that."

As "Hope and Healing," a 2018 pastoral letter from the Catholic bishops of California, observes, "Christian faith and religious practice do not immunize a person against mental illness."

The response at the time was something less -- a lot less -- than what Callahan had hoped.

"There was generally very little interest in this," he remembered. "We sent the call for proposals out to every diocese; every bishop in the country … multiple times. And we had a total of, I think, 12 responses."

Callahan said he understands the church is also grappling with other issues of human suffering, such as poverty. "But this can be as crippling. And certainly, it can hinder a person's everyday functioning, and indeed be fatal."

Ultimately -- through the USD grants -- mental health ministry pilot programs were introduced in the archdioceses of Hartford and San Francisco, and in the dioceses of Orange, Rapid City and San Jose.

"Our bishop -- Bishop Kevin Vann -- has been a strong supporter and proponent for mental health ministry for many years," said Linda Ji, director of the Office for Family Life in Orange, California. Bishop Vann was also instrumental in the drafting of "Hope and Healing."

Following the 2013 suicide death of Protestant pastor Rick Warren's son, Bishop Vann partnered with Warren, whose Saddleback Church is also based in Orange County, to twice host a "mental health and the church" conference. Awareness and commitment rose, but the diocese's mental health ministry was still in its nascent stages. The USD start-up grant offered much-needed capacity-building resources. "It only made sense that we go for it," Ji said.

While the COVID-19 pandemic disrupted initial expansion plans, roughly a quarter of the Orange diocese's almost 60 parishes now have a mental health ministry. "It's a part of our answer to the command to 'Love one another as I have loved you,'" Ji said, referring to John 13:34.

Another source of inspiration can be found in the Diocese of San Diego, now regarded as a pioneer in mental health ministry programs. The present ministry launched in 2018 at the request of then-Auxiliary Bishop John Dolan. Still, Deacon Bill Adsit, mental health ministry coordinator in the diocese's Office for Family Life and Spirituality, admitted he and his colleagues felt daunted by the task at the outset. However, today, almost 20 San Diego parishes either have mental health ministries or are working toward that goal. The diocese also celebrates annual Masses for suicide awareness and mental health awareness.

Bishop Dolan, now bishop of the Diocese of Phoenix, himself lost three siblings and a brother-in-law to suicide, and ministered to family members who attempted it. He and Deacon Shoener are co-editors of "When a Loved One Dies by Suicide," which has a complementary film series, and "Responding to Suicide: A Pastoral Handbook for Catholic Leaders" -- both published by Ave Maria Press in 2020.

Addressing a 2022 mental health ministry conference in Los Altos, California, Bishop Dolan reminded his hearers that, "Our sisters and brothers coping with mental illness are sitting next to us in the pews during Mass as well as sleeping in the church parking lot at night. … As Catholics, we are called to reach out and embrace all of our brothers and sisters suffering from illnesses, and we need not treat mental illness as different from any other medical condition."