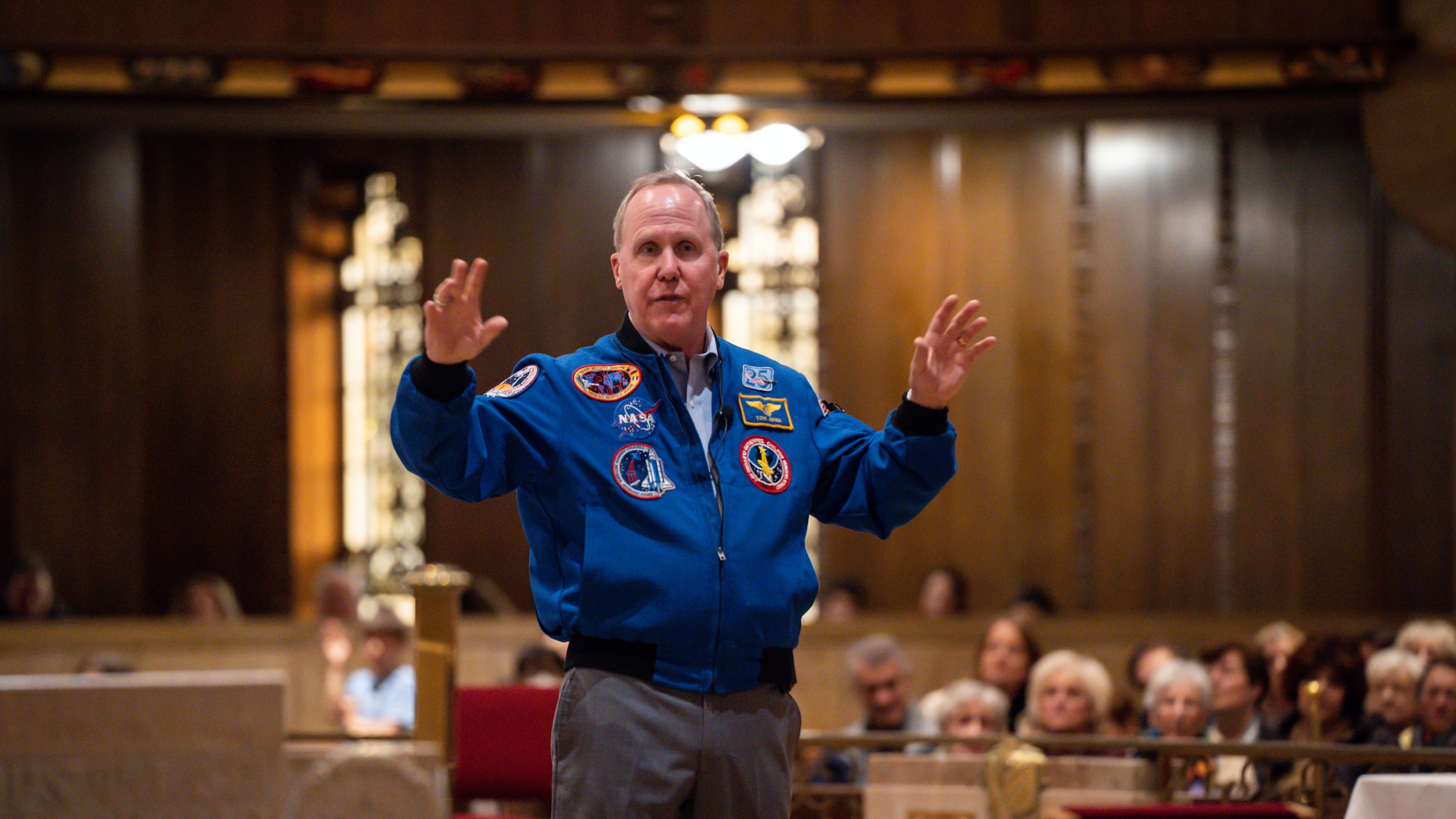 Astronaut Tom Jones had an eleven-year career with NASA, where he accumulated 53 days in out space over the span of four mission. Jones spoke how his faith aided his career, how it feels to take in the majestic nature of God’s creation from the heavens and how he and his crew relied on God 220 miles above the surface of the Earth. (Photos by Valaurian Waller | Detroit Catholic)

Tom Jones relied on God, his crewmates during his four missions with NASA

ROYAL OAK – Astronaut Tom Jones shared his experience of what it’s like journeying through the celestials with the audience gathered at the National Shrine of the Little Flower Basilica on April 6.

Jones, born and raised a Catholic, was hired in 1990 with the 13th class of NASA astronauts, took part in four space flights and led in three spacewalks during his time with NASA.

Jones spoke about his accumulated 53 days in outer space between 1994 to 2001 as part of his “Live at the Basilica” event, sharing his experience of faith through what he referred to as “God’s great cathedral in the sky.”

Jones told the audience how he got through his experience in space by God’s grace.

“God was present during my astronaut career, and I could not have accomplished the things that I did with my astronaut crewmates without His help and grace,” Jones said. “We have faith in God here on Earth; and in orbit, we carry that faith with us, and He still works wonders 250 miles above the planet. We do not need to worry about the limit of God's love. That grace of God is with us all the time everywhere we go.”

Jones remembers being a boy and watching as the Apollo 16 mission – the fifth mission to land on the moon – launched in April 1972. The moment inspired him to become an astronaut. 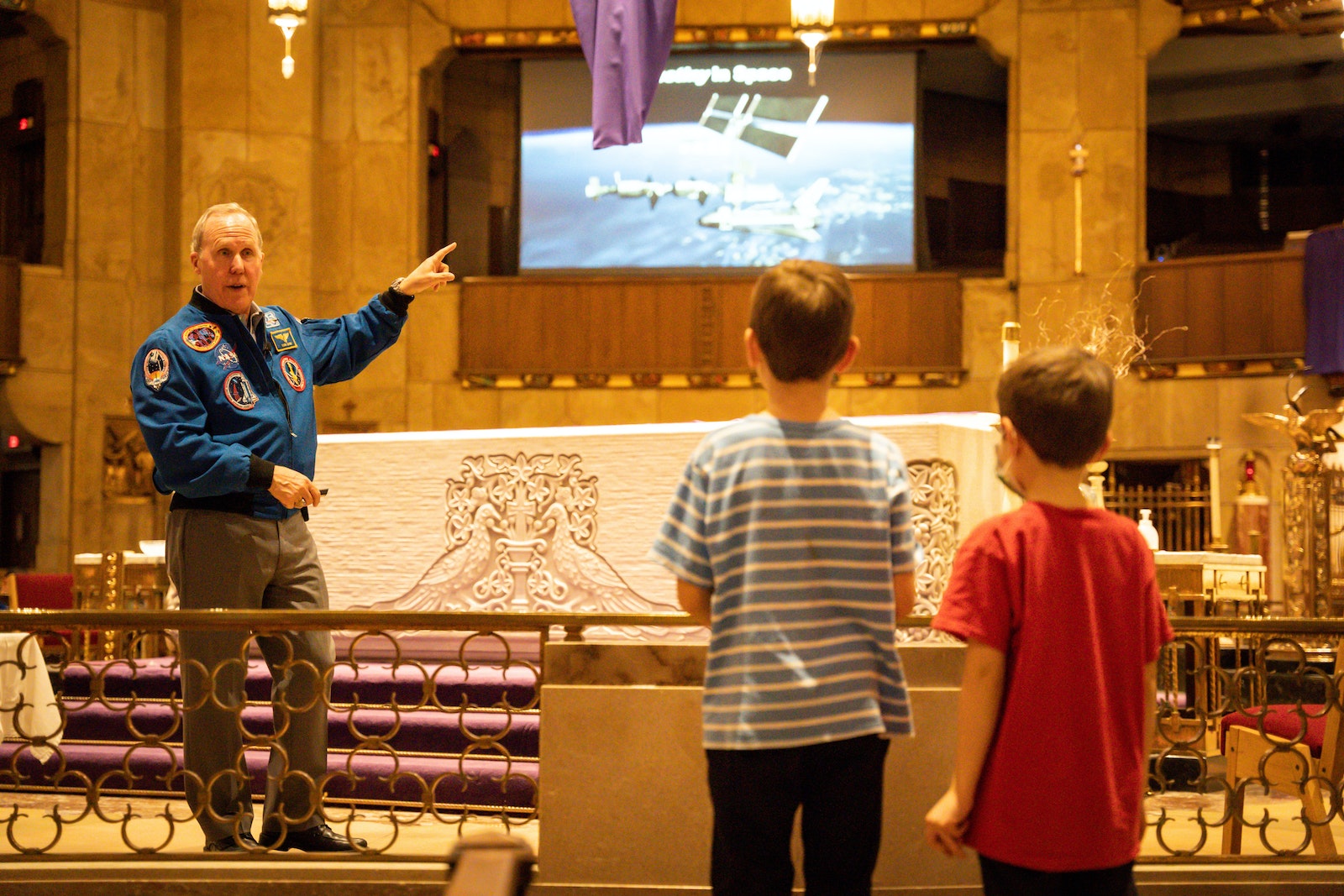 Jones explaining his role and mission aboard the International Space Station to two young boys the “Live at the Basilica” speaker series April 6. Jones was inspired as a boy watching the Apollo 16 mission.

Nearly all the astronauts who came before him had served as test pilots before qualifying to join NASA, Jones explained. He realized that he would have to do the same in order to be considered for NASA's astronaut corps.

Jones enrolled in the United States Air Force Academy in Colorado Springs, where he continued to attend Sunday Mass and took part in the Catholic choir at the academy’s chapel. Upon graduation, he became an officer in the U.S. Air Force, flying B-52 bombers during the Cold War.

Still, his ultimate goal was to work for NASA.

Jones got his Ph.D. in planetary science in order to boost his science credentials, and in 1990, Jones was chosen as one of 23 astronaut candidates for the 13th NASA class.

“My (first) mission was 28 years ago this month,” Jones said. “I was able to go on a mission to study our changing planet.”

His team was tasked with using a special radar camera to capture aerial pictures of Earth.

As his mission approached, Jones was nervous. He turned to God in prayer, asking for success.

“That’s when you say a prayer: ‘Lord, I am going to do the best I can with the talents that you give me. (I am going to try not) to let these people down and not let my family down,’” Jones said.

“You don’t have a lot (to do) in the cabin before takeoff, so you have some time to reflect on your faith,” Jones added. “We have our faith life on Earth, we have our prayers, we go to Mass, we read the Bible.”

While strapped into the tiny cabin before launch, Jones's crew discussed the patron saints of astronauts – St. Therese of Lisieux, who was chosen by French aviators as their patroness during World War I, and St. Joseph of Cupertino, a 17th-century monk known for levitating above the altar in the monastery’s chapel. 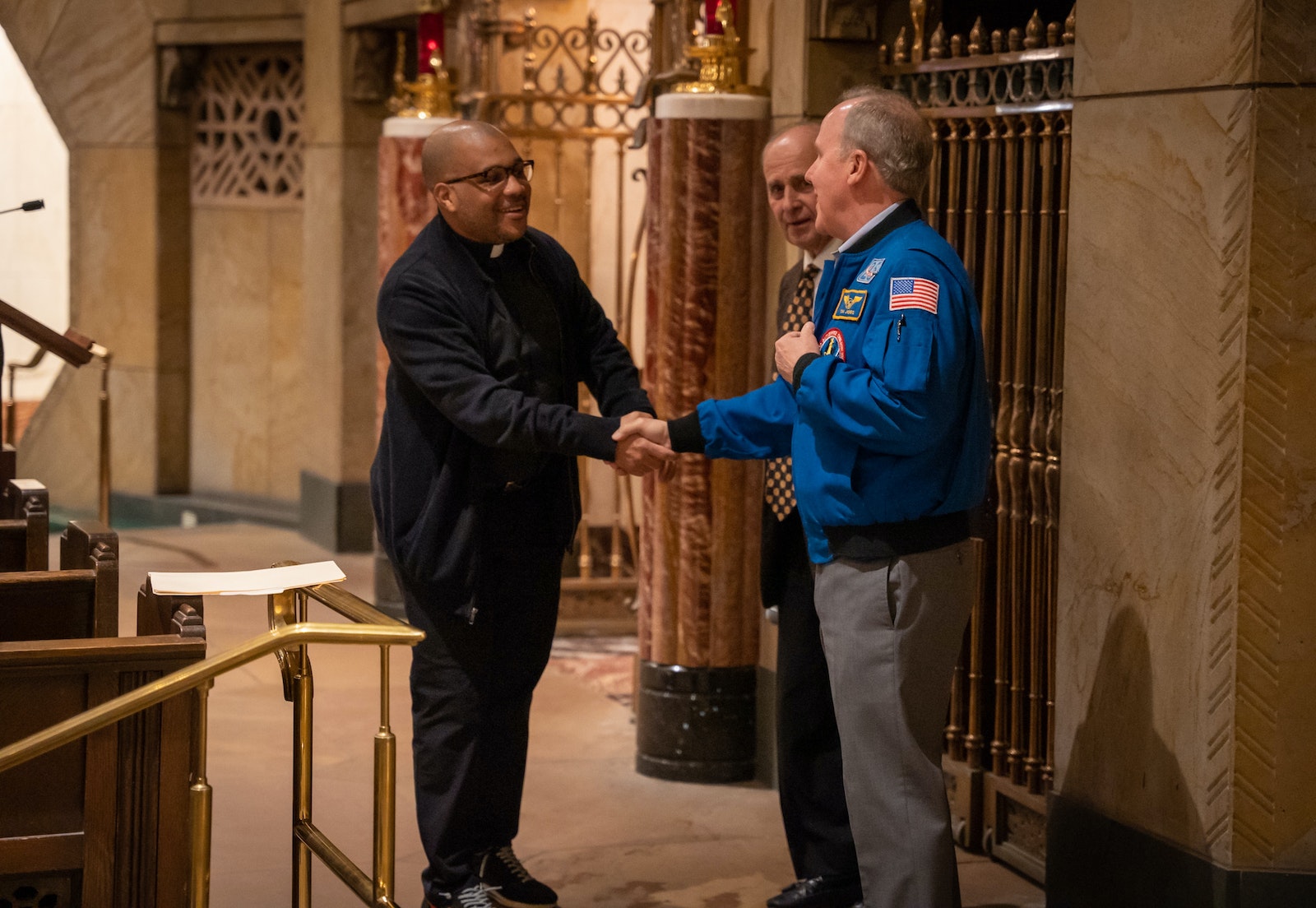 Jones shakes hands with Shrine associate pastor, Fr. John McKenzie, during the “Live at the Basilica” speaker event April 6. Jones spoke how he and two other astronauts were able to take in communion while on mission in outer space, and how much he relied on God in praying for the success and safety of the mission.

However, his first launch did not go as planned. After waiting five hours on the launch pad, the flight was delayed until the next day due to bad weather conditions. On April 9, 1994, Jones finally got his chance to launch into space.

Jones recalls the shaking and rattling as the engine came alive – all he could do was hold on tight and pray that his team made it off the ground.

“Down on Earth, my family was at the (launch) control center, and all they could do was watch and pray,” Jones said of his wife and two children. “They were looking up with a mix of exhilaration and fear – remember, this was not long after the Challenger disaster. You pray again to make the best use of your talents from the Lord.”

Twenty-two years since Jones first watched Apollo 16, and now, after years of hard work, training, prayers and waiting, he was finally in orbit.

Once they reached space, it took Jones an hour before he could steal away to look out the window. All he saw was pitch black darkness.

“Eventually the sun came up and came through the window and hit me in the face and tears came to my eyes – tears of gratitude for the Lord letting me get up here after 29 years and see this with my (own) eyes.”

The team remained busy throughout the 11-day mission, running the radar and collecting images 24/7.

Two of the other astronauts on that first mission were also Catholic. One received permission to bring the Holy Eucharist into space so that the three Catholics could hold a communion service. Amidst their busy mission schedule, they found time for a 15-minute communion service.

“We were up on the flight deck, and it was dark outside, and we said our prayers and we took the Eucharist together,” Jones said. “It was very moving. (Christ) was there ensuring our safety and helping us do our best job up there.” 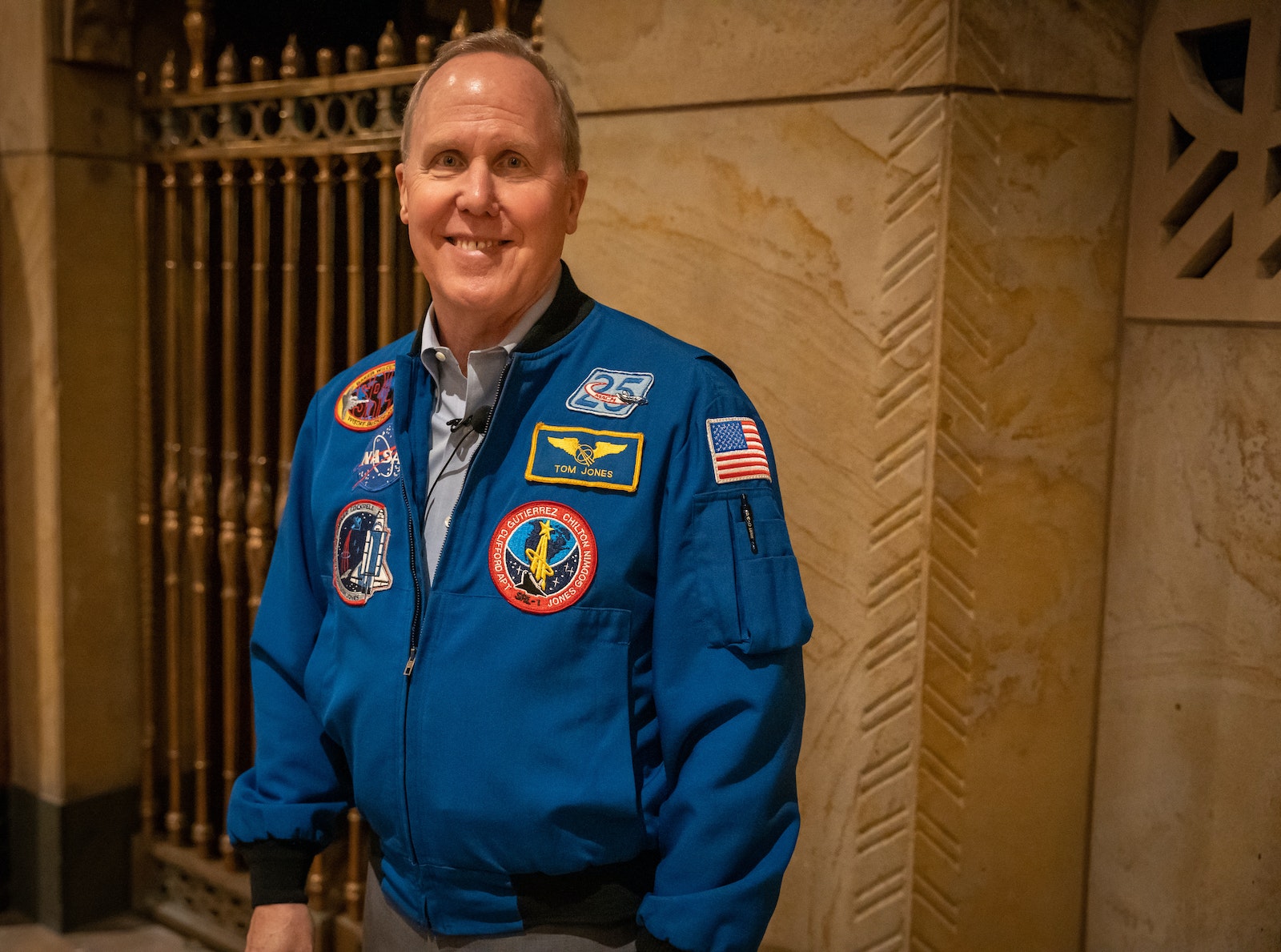 Jones’ last mission in space was in 2001, installing Destiny, the scientific lab aboard the International Space Station. After completing the spacewalk ahead of schedule, Jones asked the Mission Control Center to have five minutes to take in the vast space around him. “I wanted to experience all of this, not as a technician, but as a human being.”

As the communion service was coming to a close, the sun came up. Jones said that his eyes filled with tears, and he looked out to see the blue of the ocean below.

"I said, '(Kevin), come look at this.' He said, 'Tom, that is the blue of the Virgin's veil.' It was a very powerful moment to share Christ together."

In 2001, Jones took part in the mission to install Destiny, the US science lab aboard the International Space Station.

After the end of the spacewalk to install Destiny, Jones noticed he was ahead of schedule. He used this opportunity to radio into the Mission Control Center and asked if he could have five minutes to take in the vast space around him.

"I wanted to experience all of this, not as a technician but as a human being," Jones said. "I wanted to soak in the view and the experience of working out there in a way that I hadn't on other (spacewalks). ...This was a view so sublime, so gorgeous, again tears filled my eyes.

"I had the realization that I was getting a view that only a few dozen people ever had before. You feel special (yet) you also feel very insignificant in the scale of creation."

Up, up the long, delirious burning blue

Where never lark, or ever eagle flew –

And, while with silent, lifting mind I've trod

The high untrespassed sanctity of space,

Put out my hand, and touched the face of God.

"Just like Gillespie, reaching out to touch the face of God, let's all of us keep reaching out for God in our lives here, and I can tell you, from my personal experience, you are going to be heard."