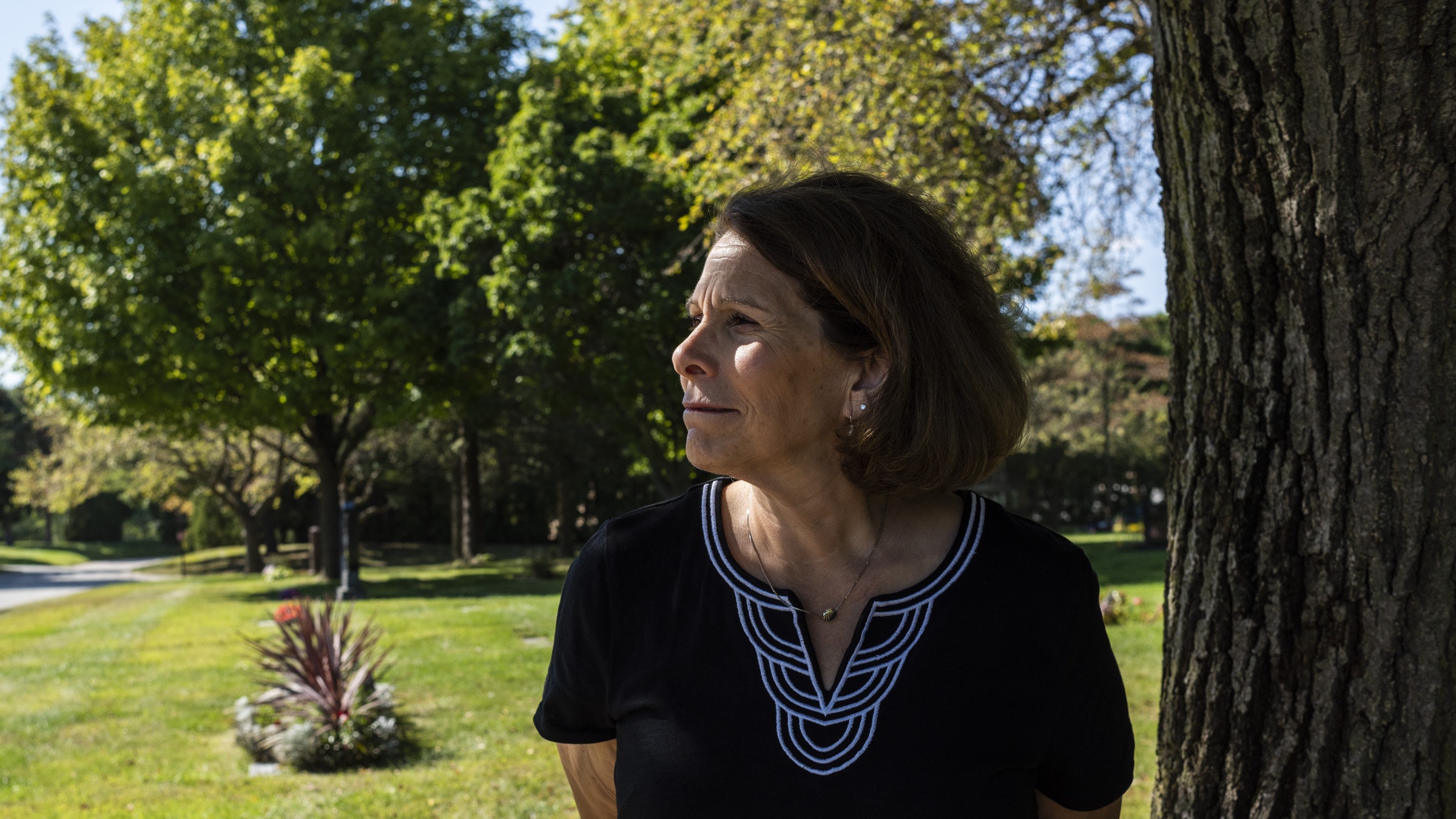 Jean Schrange went to the Remember Me service at Resurrection Cemetery in Clinton Township to remember her mother after her mother passed away in March 2020. The Remember Me events were part of Catholic Funeral and Cemetery Services initiative to give families a chance to remember their loved ones after they couldn't have a funeral or luncheon last year becuase of COVID-19 restrictions (Photos by Rosa Maria Zamarron | Special to Detroit Catholic)

CLINTON TOWNSHIP ─ Jean Schrage felt a sense of peace as she pinned up a photograph of her deceased mother onto a photo memory wall at Resurrection Cemetery on Saturday in Clinton Township.

Schrage was taking part in a special service known as Remember Me, for families and friends of those who passed away during COVID when many were not able to have traditional funerals. The services were developed by the Archdiocese Catholic Funeral and Cemetery Services (CFCS) in conjunction with the Mt. Elliott Cemetery Association and St. Hedwig Cemetery in Dearborn.

Coming together for this event was emotional and comforting for Schrage.

“There was no funeral and no funeral home,” Schrage said of her mother’s passing in March 2020. “We gave the funeral home pictures from the car, and they posted them online.”

She said it was “very sobering” to see the volume of people who attended the Remember Me service – an estimated 700 people at Resurrection Cemetery.

The Remember Me events were held at various times at Holy Sepulchre in Southfield, Our Lady of Hope in Brownstown, Resurrection in Clinton Township, and St Hedwig in Dearborn. They were each ecumenical services for all who lost loved ones during the COVID pandemic – those who died from COVID and for those who died during COVID – and were not able to hold a traditional funeral service. The events, which were also live-streamed, were held outdoors with various speakers, music, and other special ways to remember the deceased.

Names of the deceased were read aloud at some of the ceremonies, while other locations opted for other forms of remembering loved ones, such as the photo wall on the stage at Resurrection. Overall, CFCS received nearly 600 names to read or remember at their events.

Fr. Richard Bartoszek, who works as the chaplain for the Archdiocese of Detroit’s six cemeteries as well as chaplain at Beaumont Hospital in Grosse Pointe, explained that it was the mission of the cemetery group to host events that would bring peace to those who have suffered tremendous losses.

“We are addressing grief, loss, and hope. During this time, everyone has lost something,” Fr. Bartoszek said. “They’ve lost loved ones and have lost the chance to grieve loved ones in a traditional way.”

He said this type of event was particularly important to those who said goodbye to their loved ones from the parking lot of a hospital, leaving the chaplain and hospital employees to become the “families” of the dying in their final hours.

The pain of COVID has also hit Fr. Bartoszek personally. Last week he celebrated Mass for his 52-year-old cousin who died from COVID in Manistee.

He said his family was able to hold a funeral Mass, but there was an abbreviated wake and no luncheon gathering, both traditional parts of a funeral that help in the loss and grieving process.

The Remember Me programs gave those left behind a chance to gather with people in the same situation.

Ted Butkin, who attended a service at Our Lady of Hope Cemetery, said his father passed away March 2020 during the COVID lockdown. Since his father, also named Ted Butkin, was in a nursing facility, the family never got a chance to say goodbye.

“It was so unfortunate for all of us, including my kids and my dad’s siblings, because we couldn’t have a wake or a Mass,” he said. “We were devastated but we knew that we were not alone. We knew that people worldwide were suffering the same way.”

One of the most difficult parts of their grieving process was not being able to gather and share stories about his dad, Butkin said.

“Being a devout Catholic, it was just crushing not to have a Mass for my father,” he said. “This is going to give us closure in our own fashion.”

“As the pandemic hit, nothing was normal about how families laid their loved ones in death,” she said.

Mt. Elliott Cemeteries Community Liaison John Agrusa said the event was an important service for the wider community as well.

“This event is really about serving the whole of humanity,” he said. “I think this is a very healing event for people to know that they are not alone.”

“Not only are they talented musicians but it’s a great way for the youth of our community to understand the process of grief,” Agrusa said.

Instead of reading names, Agrusa said the cemetery opted for a photo memory wall.

“We decided to have families bring a photograph of their loved ones to flank the stage and they have become part of the connection to the clergy service and presentation,” he said.

At the end of the ceremony, families were invited to make memory ribbons and personalized notes to their loved ones.

Cortese said CFCS hopes to make this event annual as they saw the remarkable interest it sparked in those who are grieving. As the word got out about this year’s services, people began emailing Cortese in thanksgiving.

“Someone shared that her loved one passed unexpectantly, saying, ‘Our hearts are broken. We appreciate this service,’” Cortese said.

“Another woman said that her mother’s last words were, ‘remember me and pray for me.’ The simple act of saying their names or writing their names gives these families a sense of peace.”