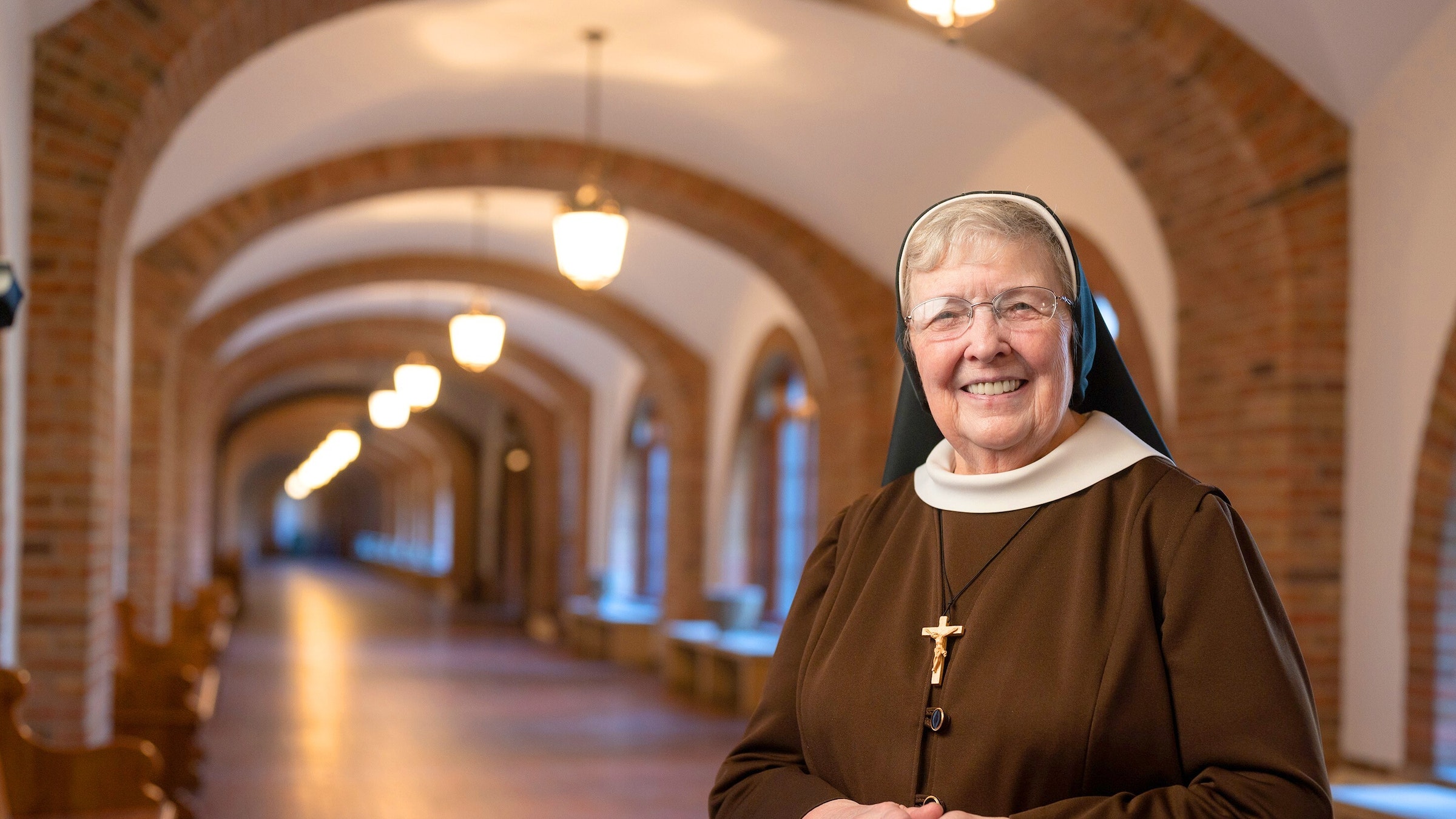 Sr. Rose Marie Kujawa, CSSF, was the sixth president of Madonna University in Livonia, serving from July 1, 2001, until June 30, 2015. (Photo courtesy of the Felician Sisters of North America)

Staffers across the university were gathered together when Sr. Rose Marie asked Benson, a Madonna alumna, to sing the Madonna Crusaders’ fight song. But Benson didn’t know it; nobody did, save Sr. Rose Marie.

“She said, 'Well, I’m going to sing it for you,'” Benson, vice president of student affairs at Madonna University, told Detroit Catholic. “She sang it through for me and the people at the meeting and gave us a copy of the lyrics and said, ‘Now we’re going to sing it together.’ It was a small moment that demonstrated the manta Sister lived by, doing what needed to be done.”

That moment of enthusiasm for the university where she was president for 14 years encapsulates how Sr. Rose Marie carried out her vocation, friends said, doing everything with 100 percent effort and encouraging others to do the same.

The St. John Cantius Grade School and Felician Academy alumna was accepted to the Congregation of Sisters of St. Felix of Cantalice Third Order Regular of St. Francis of Assisi — the Felicians — in 1960, professing her final vows in 1968.

Sr. Rose Marie earned a bachelor’s in mathematics from Madonna in 1966 and embarked upon an education career that took her to St. Valentine School and Bishop Borgess High School in Redford Township and Ladywood High School in Livonia before she was assigned to Madonna College in 1976, the Felician-run coeducational liberal arts college where she had her greatest impact.

“I was fortunate enough to see her at the end of her life, and she knew what was happening physically and everything with her, but she was asking me, 'How are things going? How are the students doing,'” Benson said. “She always had a keen interest that progress was happening, not progress in a materialistic way, but that they are really getting it, that they are really feeling part of Madonna.”

Sr. Rose Marie took her role as president of the Catholic-Felician university seriously, always remembering the Franciscan values the school was founded upon and its mission to offer Christ-centered education that would better the lives of its students, said Sr. Janet Marie Adamczyk, CSSF, chair of the mission committee on Madonna's board of trustees, where she served three teams on the board.

“As a Felician, she’d have a monthly meeting with all the people on the campus, at the college, in the Felician motherhouse, just so all the sisters stayed coordinated,” Sr. Janet Marie said. “Sr. Rose Marie was always present for all activities. If there was a funeral, she was there. If we had a jubilee celebration, she was there.

“She really loved her community,” Sr. Janet Marie added. “In the last couple of years, she was the local minister of Presentation Convent, and every time she walked into a room, she made every sister feel so important. You were never a disruption to her if you had a need or a concern.”

Sr. Janet Marie said Sr. Rose Marie was popular among the Felician community and was always quick to volunteer and work on the community’s hospitality committees and other initiatives that served the Felicians across the province.

But it was Sr. Rose Marie’s work with growing the enrollment and mission of Madonna University that will serve as her greatest legacy, Sr. Janet Marie said, particularly sponsoring a health education program that recruited Haitian students to study at Madonna and allowed them.

“That example of being a woman of prayer, deep faith, and living the Franciscan charism about her to where people wanted to work with her, they wanted to support her and she loved life, she loved people and had many friends,” Sr. Janet Marie said. “That is her legacy, her love for education and what she was able to do at Madonna and being a member of the Felician community out to make a difference.”

Serving as president of a college that saw tremendous growth in both enrollment — from 1,500 to 4,500 students — and the number of programs offered — up to 100 undergraduate and 35 graduate offers — may be enough for a career, but Sr. Rose Marie wasn’t done serving.

In 2015, she joined the Archdiocese of Detroit's curial staff, serving for five years as Archbishop Allen H. Vigneron's delegate for consecrated life in the archdiocese’s Office of Clergy and Consecrated Life.

Sr. Rose Marie’s role in the office was to serve as a conduit between the archdiocese and the various religious communities in southeast Michigan, caring for their daily needs and working with canonical consultants and immigration authorities to bring in religious from out of the country to serve in the area.

Fr. Spezia said Sr. Rose Marie had a servant’s heart in her role as delegate for consecrated life with much the same energy she had when she was president of Madonna.

Her devotion to the Church was even recognized by the papacy, when she was awarded the PRO ECCLESIA ET PONTIFCE medal (“For Church and Pope”) on March 21, 2021, from Pope Francis for her six decades of service to the Church. The medal was bestowed upon Sr. Rose Marie by Archbishop Vigneron at St. Colette Parish in Livonia.

“It was her love for Christ and love for religious that kept her going,” Fr. Spezia said. “In the pre-COVID days, when everyone was in the office every day, we’d regularly eat lunch together as an office, and one my fond memories was Sister being the storyteller in the office, bringing everyone together. Sr. Rose Marie just had that grace to work with everyone and make everyone comfortable.”

Sr. Rose Marie’s dedication to service and remarkable people skills have left a mark in the classroom, the boardroom and the curial offices, with every stop along her vocation another place to “do what needed to be done.”

“We invited St. Rose Marie to offer a welcome to all the new students at Madonna at the start of the year,” Benson remembered. “She was right there to warmly greet the students and parents, providing a concise history of the Blessed Virgin Mary Chapel and how Madonna grew to become the university it is today. Her remarks were so precise; she was always careful with her words, and she didn’t have one note in front of her. But she knew the history intimately, sharing what came through: her love of Madonna, love of the Felician Sisters and love of the Catholic faith."

A funeral Mass was celebrated for Sr. Rose Marie on Jan. 3 in the Presentation Chapel at 36800 Schoolcraft Road, Livonia.