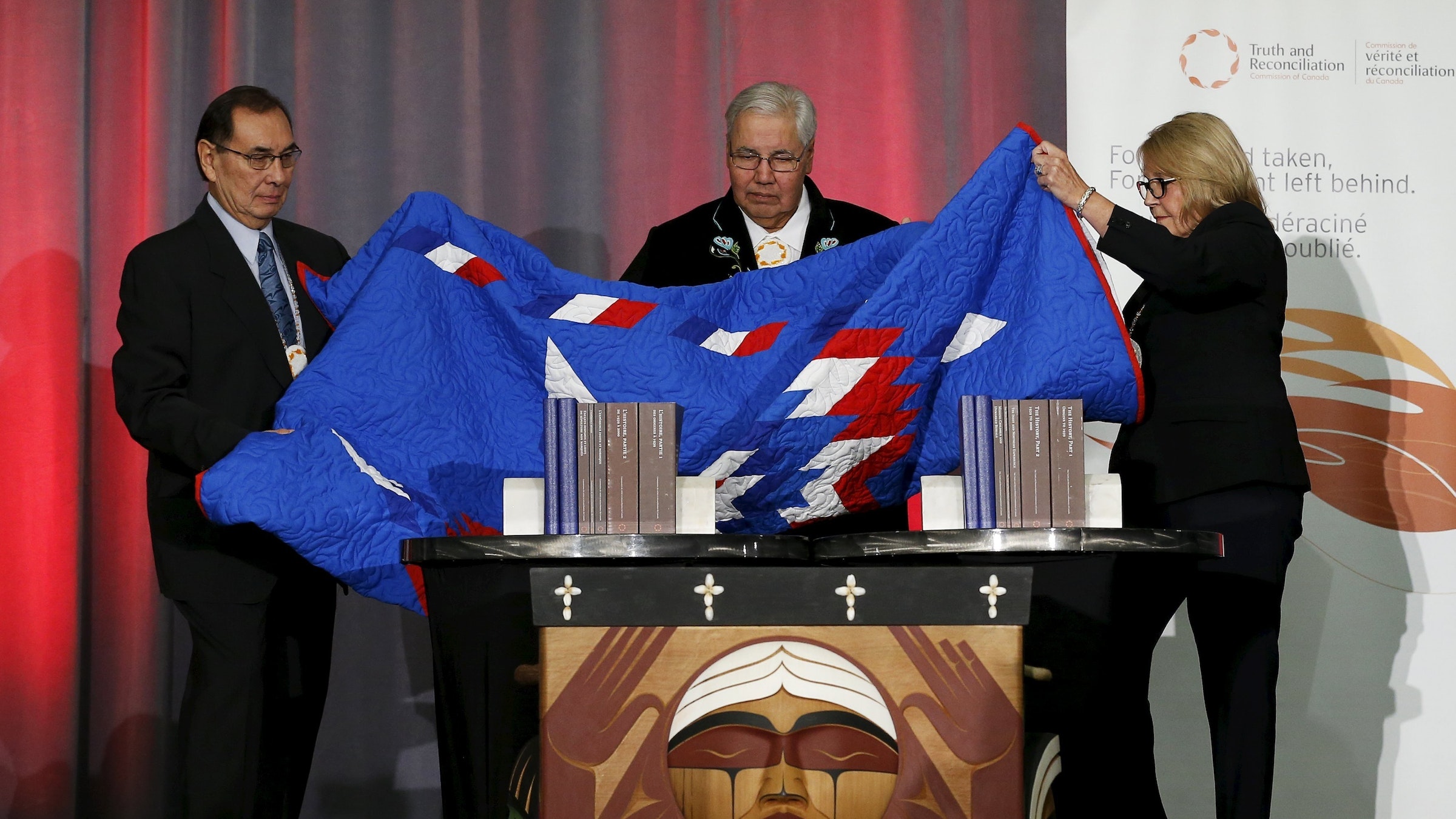 Cree Chief Wilton Littlechild, Justice Murray Sinclair and Commissioner Marie Wilson unveil the Truth and Reconciliation Commission's final report in Ottawa, Ontario, Dec. 15, 2015. One of the Calls to Action in the report was a papal apology -- in Canada -- for church leaders' past treatment of Indigenous Canadians. (CNS photo/Chris Wattie, Reuters)

TORONTO (CNS) ­─ In one hour gathered in a room with Pope Francis, 13 Assembly of First Nations delegates plan to lay down heavy burdens and raise up the hope of nations.

"Our hope is that this visit and a potential visit from the pope on our home territories will provide some measure of dignity and respect to the survivors and the intergenerational survivors of the residential schools," Dene Regional Chief Norman Yakeleya told reporters at a news conference to announce the assembly's delegation that will go to Rome.

A delegation of Indigenous leaders, accompanied by several bishops, is scheduled to meet with Pope Francis at the Vatican in December to listen to their experiences of how they and their people have been treated by Catholics in Canada, with special attention to the impact on the Indigenous communities of Canada's residential schools, many of which were run by Catholic religious orders or dioceses. The schools separated children from their families as well as from their language and culture.

"This trip has been a long time coming," said Yakeleya, who has been asked by National Chief RoseAnne Archibald to lead the First Nations delegation.

"We seek to hear the words on our lands by the pope. We seek justice. It is only then that we can begin walking truly on the healing path of reconciliation," Yakeleya said. "I also ask every Canadian to stand with First Nations as we continue this painful but important work."

Tk'emlúps te Secwépemc Chief Rosanne Casimir hinted that she would be asking Pope Francis to visit the site in Saskatchewan where 215 unmarked graves were discovered in May.

"That, too, would be extremely significant to visit this part of Canada and to have that opportunity to meet with the survivors," she said.

While the First Nations' hour with Pope Francis will touch on a number of themes, the clear focus will be on an apology on Canadian soil, in accordance with the 2015 Canadian Truth and Reconciliation Commission's Call to Action.

"Nothing would be more important than to have the pope issue an apology from our homeland," said former Assembly of First Nations National Chief Phil Fontaine, who will represent the Manitoba chiefs on the trip. Fontaine led a delegation in 2009 to meet with Pope Benedict XVI.

The residential schools have long been at the heart of discussions and reconciliation efforts between Indigenous Canadians and the Catholic Church. The issue gained urgency in late May when the Tk'emlúps te Secwépemc First Nation reported that, using ground-penetrating radar, an estimated 215 bodies had been found in unmarked graves at the site of the former Kamloops Indian Residential School, run by a Catholic religious order until 1969. Similar discoveries followed at the sites of other residential schools.

Both Fontaine and Yakeleya are residential school survivors.

"Whoever thought that a residential school survivor from Inuvik for seven years ... that I would have an opportunity to talk to the chief of the Roman Catholics, the head boss, the head man, the Holy Father. What would I say?" Yakeleya asked. "You gotta be careful. Prayers come pretty fast and pretty good."

Youth delegate Rosalie LaBillois said she plans to speak to Pope Francis about the intergenerational trauma that her generation has fought through.

"That opportunity that I get is something that my grandfather never got," she said. "He never got the chance to speak his truth. There are unmentionable things that he could never speak about. Now it's my opportunity to speak my truth." She said she hopes "to help represent that youth perspective from across the country, on how we are severely impacted."

LaBillois, who is the Assembly of First Nations National Youth Council co-chair, wanted to be clear that the mandate to the delegates extends beyond the time in Rome.

"After our trip, what's it going to look like when we come home?" she asked. "How do we share our experience, in being able to empower young people, to be proud of who they are?"

Swan is associate editor of The Catholic Register, Toronto.