Five CHSL volleyball teams still in the hunt for a state title, but only De La Salle in football 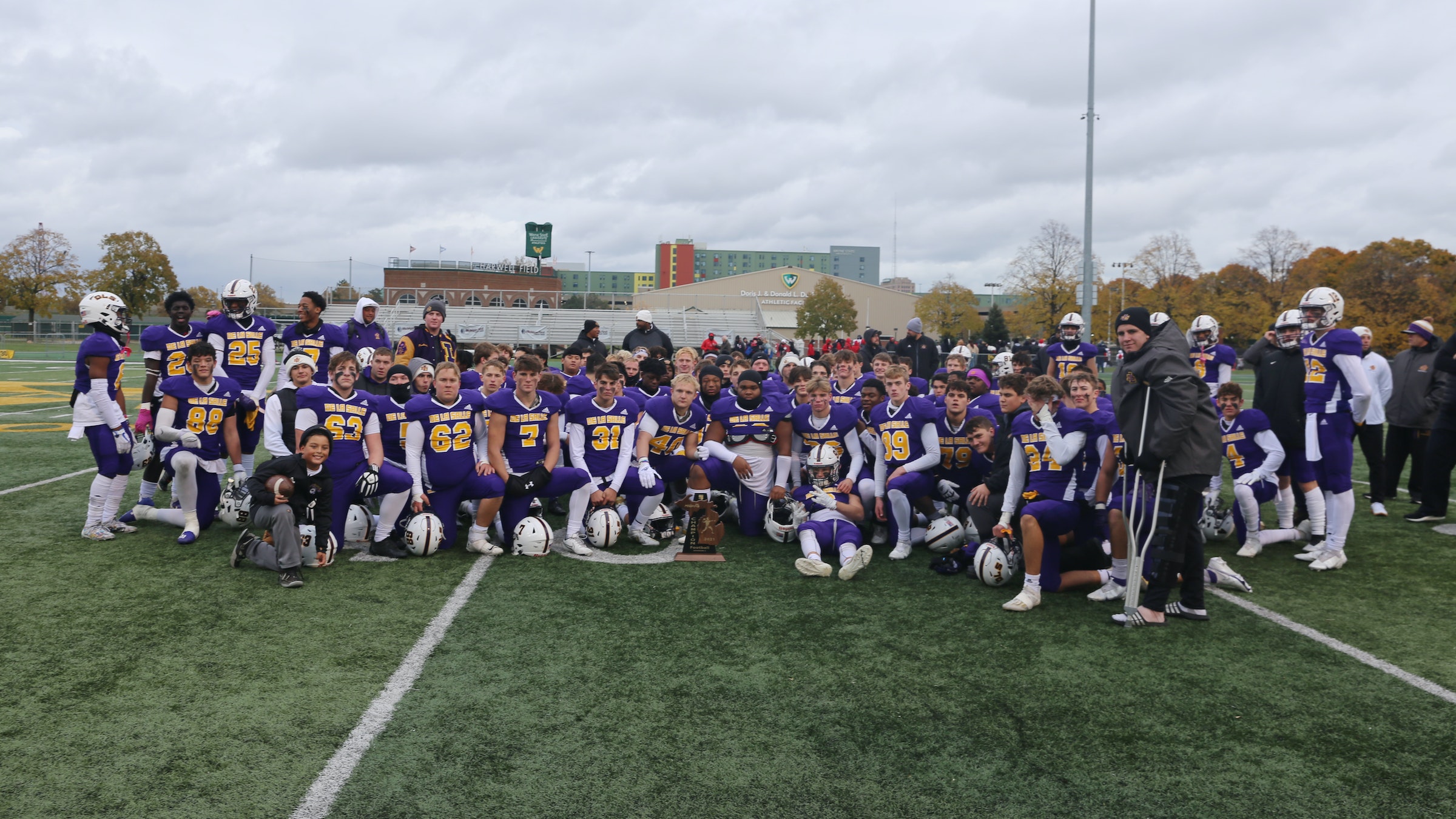 De La Salle — No. 1 in Division 2 and a perfect 11-0 record — continued its march toward the state football championship with a regional victory over Roseville, 45-14. The remaining obstacle to a chance to make the finals a second year in a row is Livonia Franklin on Saturday afternoon. (Photo courtesy of Kevin Fitzhenry | De La Salle Collegiate)

DETROIT — Heading into the final week of volleyball competition, five Detroit-area Catholic high schools remain in the running for a state championship.

The prospects aren’t as good on the gridiron as three Catholic League squads were sent to the sidelines last weekend, leaving just highly touted Warren De La Salle in the hunt for the ultimate prize.

The Pilots — No. 1 in Division 2 and undefeated (11-0) — disposed of neighbor Roseville, 45-14, in a regional contest played at Wayne State University’s Adams Field on Saturday afternoon.

They will have to get past Livonia Franklin (7-5) in a semi-final showdown at 1 p.m. Saturday at Hazel Park. The two teams have met just one time, the Division 2 state final in 2017, won by the Pilots 41-6.

Of the three CHSL teams eliminated, Bloomfield Hills Brother Rice (8-4) lost a heartbreaker, 20-17, to Mason, which scored the winning touchdown with nine seconds to play.

It’ll be a week like no other for volleyball contenders

Dearborn Divine Child plays a quarterfinal match against No. 10 Macomb Dakota at 7 p.m. Tuesday at St. Clair Community College in Port Huron. The winner will face either No. 3 Ann Arbor Skyline or No. 7 Northville in a semi-final match at 6:30 p.m. Thursday.

No. 1 Pontiac Notre Dame Prep plays No. 4 Detroit Country Day at 5 p.m. Tuesday at St. Clair County Community College in Port Huron. The winner advances to play a semi-final match against either No. 2 Grand Rapids Christian (Division 2 champ the last three years) or No. 10 Niles at 4:30 p.m. Friday, Nov. 19.

Royal Oak Shrine will play No. 9 Reese in the quarterfinal at 6 p.m. Tuesday at Genesee High School. The winner will go up against either No. 1 Muskegon Western Michigan Christian or Watervliet at 12 noon Friday. The Knights won their second regional in a row by trimming Sandusky 25-10, 25-13, 25-10.

No. 2 Monroe St. Mary Catholic Central, which has won Division 3 two years in a row, plays No. 3 Pewamo-Westphalia in the quarterfinal at 7 p.m. Tuesday at Jackson Lumen Christi High School. The winner will meet either No. 6 Calumet or No. 13 McBain at 2 p.m. Friday.