Five-time cancer survivor converts to Catholicism, says nothing can shake his faith in God 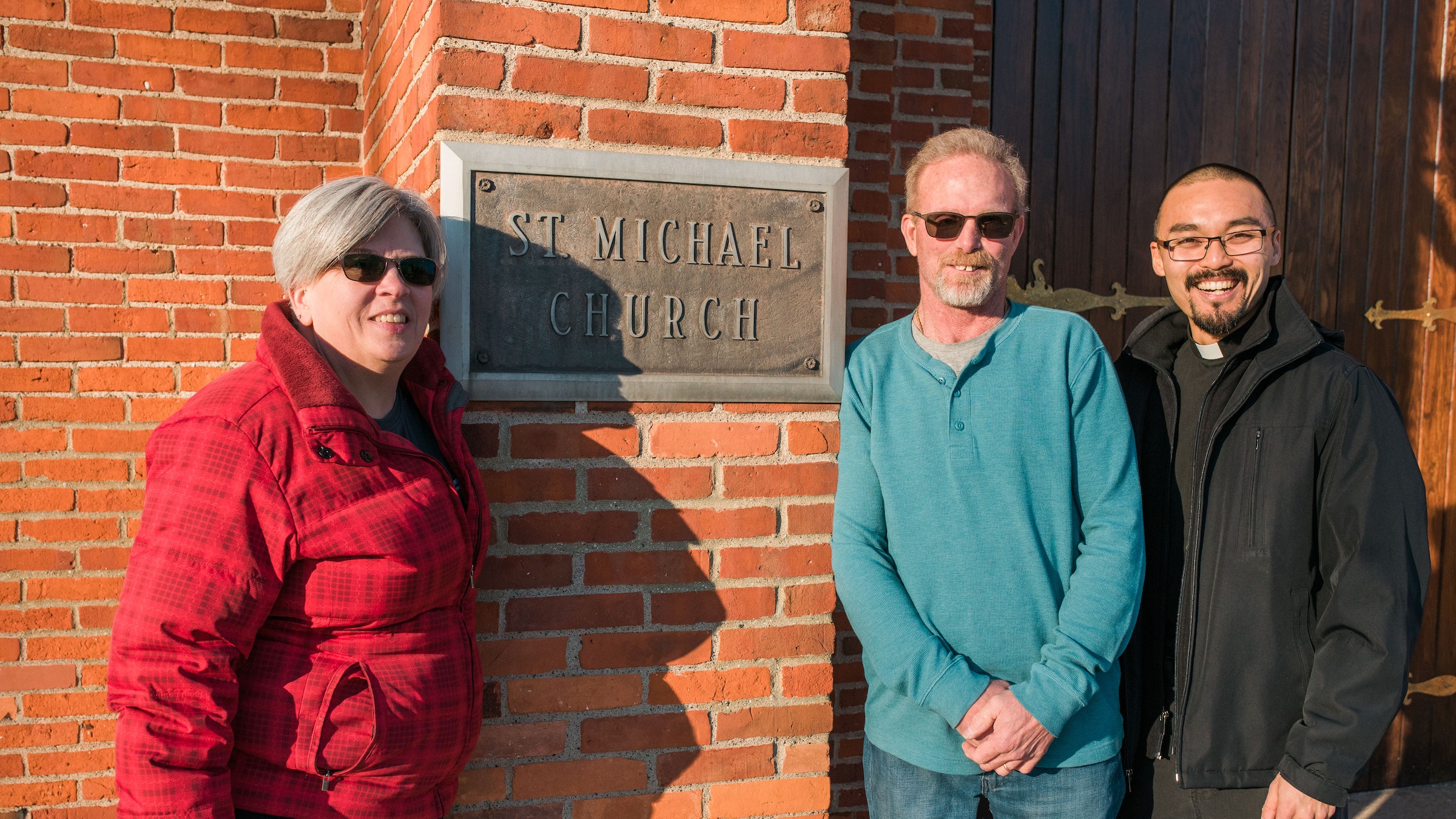 Jim Evans, middle, entered the Catholic Church in 2017 after battling and surviving cancer five times during his life — three times as a child and twice recently, when doctors had to remove his right eye and part of his kidney. Despite Evans' hardships, he credits his wife, Nancy, left, and pastor Fr. Philip Ching, right, of St. Michael the Archangel Parish in Monroe, with helping him trust in God's greater plan. (Photos by Valaurian Waller | Detroit Catholic)

MONROE — It wasn’t until Jim Evans battled cancer five times, losing his right leg and right eye, that he and his wife found their place in the Catholic Church.

“I’m still here; I’m still breathing every day, and I have an awesome support system,” Evans said, adding that he doesn’t question the reason God still needs him on earth.

He said doesn’t want anyone to feel sorry for him, and he is honored when people want to hear his story.

It all started in 1972 when Evans was 12. He and his family were living in Cadillac, Michigan, when Evans noticed his right knee was swollen. His mother, who was a nurse, took him to the hospital to have it X-rayed. It was a Sunday night, and Evans hoped he would be able to miss school the next day.

He ended up in class as usual on Monday morning, but he and his parents went to Ann Arbor for tests and more X-rays 10 days later. During his stay, his parents tried to prepare him for what was likely coming by asking him what he would do if doctors said his leg would have to be removed. Evans wouldn’t even consider the idea.

Doctors confirmed shortly afterward that the swelling in Evans' knee was a tumor. One told him his leg would have to be amputated. Not understanding the word, Evans said that would be fine, as long as he could walk out of the hospital. He had to go play football.

The doctor further explained the procedure, and Evans said the doctor could remove his leg as long as he could put it back on. Finally, the doctor explained that if the leg was not removed, the tumor would kill him. His leg was amputated above the knee the next morning, and Evans stayed in the hospital for a month.

Doctors gave him a 7 percent chance to live one year and knew the cancer would return.

“A lot of cancer surviving comes from the patient not wanting to give up,” Evans said.

Through it all, Evans was treated with an early, very toxic form of chemotherapy. Some of the treatments were so dangerous that Evans had to take a rescue factor, or a drink that would neutralize the toxicity of the treatment so it wouldn’t kill him along with the cancer cells, immediately after.

Evans was too young to understand much of it and told his mother, “I don’t understand why I have to get so sick to get better.”

A life of helping others

Years later, Evans became an orthotic and prosthetic technician, or someone who makes artificial limbs and body braces. His career allows him to give back.

“That’s worth more to me than anything in the world,” he said.

He met his wife, Nancy, while attending college in Minnesota. They got married in 1988 after dating for less than a year.

Evans said they couldn’t imagine life without each other.

“We took to heart for better or for worse, for rich or for poor,” he said.

As an orthotic assistant, Nancy Evans helps fit socks and braces for amputees.

Nancy Evans was by his side when Jim was diagnosed with cancer for a fourth time about three years ago. She took in information as the doctor explained that Jim Evans had a form of melanoma on his right eye. Jim Evans shut down when he heard the word cancer and was crying so loudly that the doctor had to shut the door so he wouldn’t scare other patients.

“I don’t know if I can physically and emotionally fight cancer again,” Evans said he thought.

The doctor tried attaching a radiation plaque to the back of Evans’ eye to kill the cancer cells. The treatment had a 97 percent success rate, but when it didn’t work for Evans, his eye was removed. Doctors found kidney cancer as well, and Evans said it would never have been detected if it weren’t for the eye cancer that prompted further testing.

Nancy Evans said the most difficult part for her was having to deal with cancer again after her husband’s eye surgery went so well. However, the cancer hasn’t come back since.

Filling the gaps with faith

Jim Evans had to get used to his “new normal;” his depth perception left with his eye. He completely missed his cup while trying to pour Coca-Cola into it at one point and had to learn to reach out first to shake hands or to take something given to him. Despite the frustration, Jim has adapted well and is still able to drive, Nancy Evans said. She added that his artificial eye looks real.

“There’s nothing he hasn’t done that he didn’t do previously,” she said.

While Jim Evan fought his fourth and fifth bouts with cancer, the couple struggled with feelings of emptiness, Nancy Evans said.

“There was just a hole, you know,” she said. “Something missing.”

“I never stopped believing, but I had fallen away from the church,” he said.

Nancy Evans was raised Catholic, but her parents didn’t attend Mass with her, sending her and her brother to church by themselves as children. Her brother never actually stayed for Mass, dropping Nancy off and leaving.

The couple realized faith could fill their void and started attending a Baptist church. They didn’t feel at home. Shortly after, Evans’ cousins invited them to Mass, and the Evans melted right in to St. Michael the Archangel in Monroe.

“We have not missed a Mass, and Mass just doesn’t seem long enough,” Jim Evans said. “It’s been an amazing almost-two-year experience for us,” he added later.

The couple went through the Rite of Christian Initiation of Adults (RCIA) and were confirmed during the Easter Vigil in 2017. Shortly before that, they were remarried in the Church, and both became ushers soon after. Jim Evans is also a lector.

Strength in the Lord

Because of his health history, Evans continues to have regular appointments. He said one of his doctors noticed he was happier after he started RCIA.

Both the cancer that started in Evans’ leg and the cancer in his eye are extremely rare. Because of this, Evans has gone through three rounds of genetic testing so doctors could look for a gene that could explain the abnormality. However, doctors found no genetic defect, Evans said, and were apologetic when they told him.

He told them not to be; God doesn’t need to give a reason for everything.

“If you can use me to help somebody else, I’ve done my job,” he said of his unusual test results.

While Evans has given his life to God, he still feels he has work to do to help people on earth. He wants to serve as an inspiration and, despite his hardship, Evans sees his glass as half full.

Some of his friends say he should be a motivational speaker, but Evans said he doesn’t have time. While his priorities have changed, he’s still the same boy who didn’t have time for cancer because he had to play football.

Since adding God to his life, Evans is no longer worried about cancer or what the future holds.

“All I can do is live every day to my fullest,” Evans said.

And in the meantime, he and Nancy Evans have found their place. They both said Mass helps them relax. 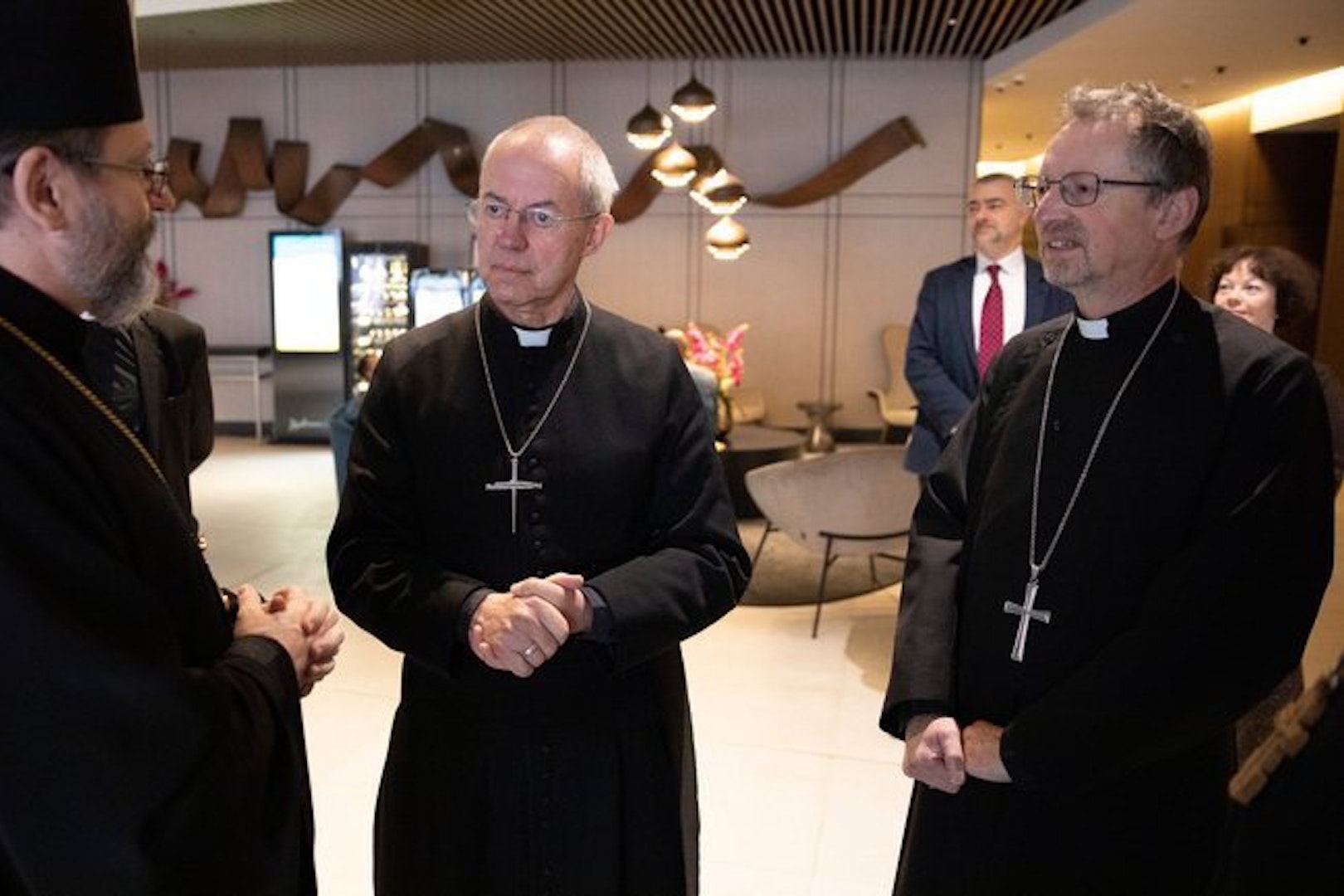 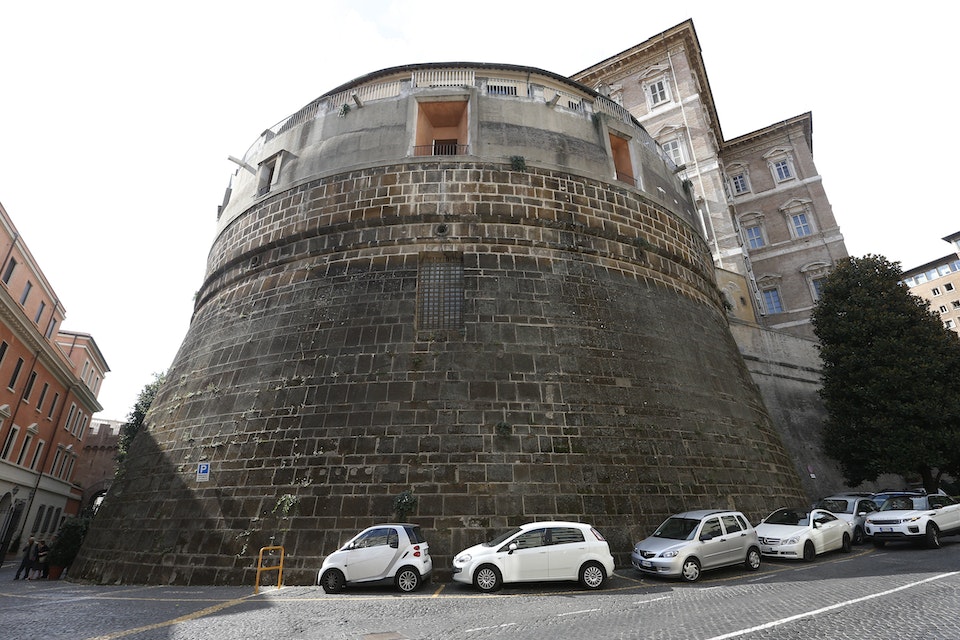