'Food for the Soul': Recipes for spiritual meals, homemade by Peter Kreeft 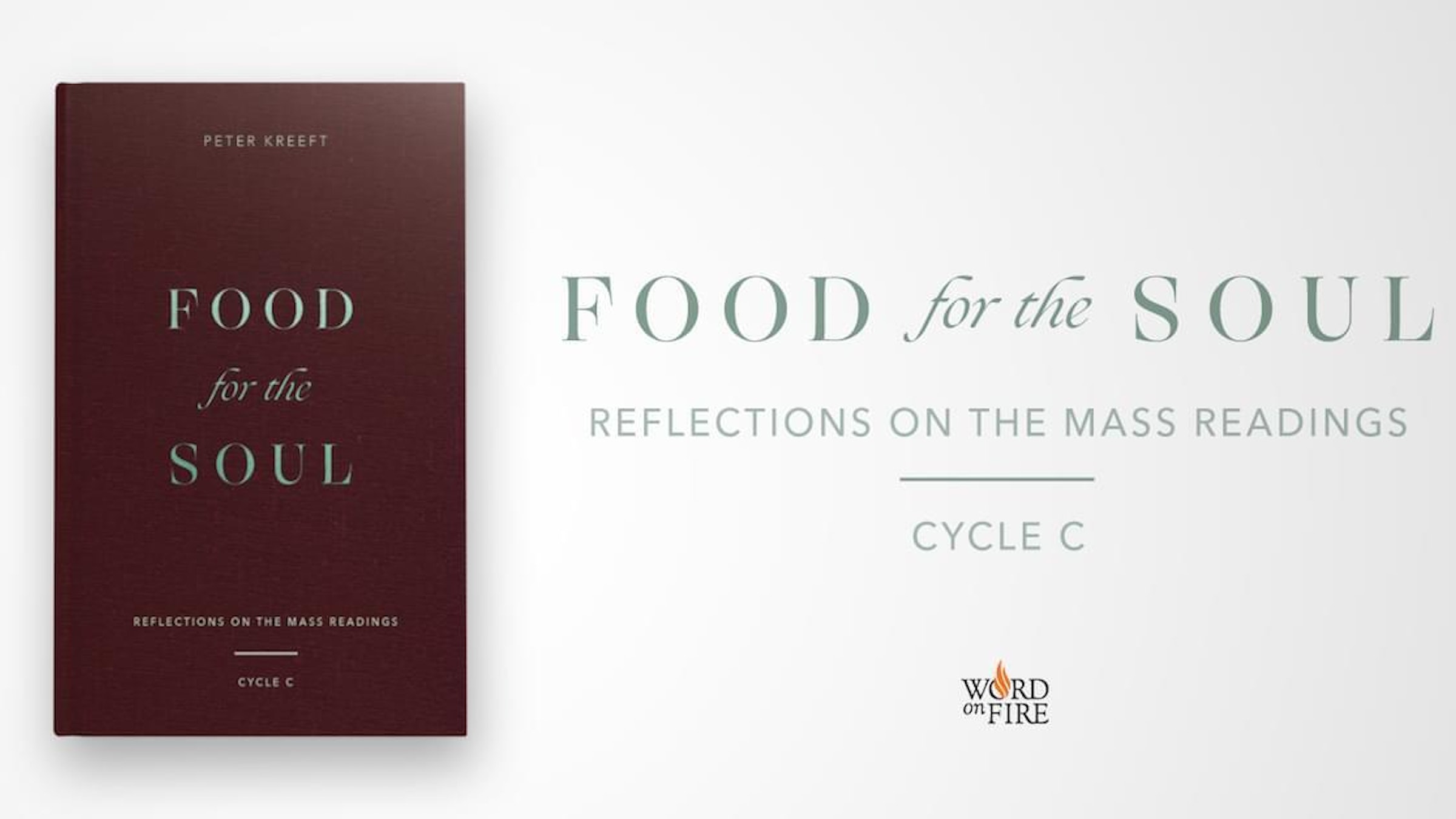 In "Food for the Soul: Reflections on the Mass Readings, Cycle C," author and Catholic apologist Peter Kreeft, Ph.D., offers deep insight into the Scriptures chosen for Mass, highlighting spiritual connections and drawing readers deeper into the word of God. (Illustration via Word on Fire)

The quiet erudition of Peter Kreeft, Ph.D., abounds in Food for the Soul, a spiritual potluck for anyone seeking insights into Scripture without being assaulted by footnotes or continual references to critical commentators. With a sly dig, the author admits in his introduction, “I wrote this book for three classes of people: enterprising priests, lazy priests, and laity.” Kreeft thoughtfully decided to give us all a hand with his ruminations as a kind of nutcracker for everyone wanting to “break open” the word of God and gain more insight into what’s found there.

For decades, Kreeft's was a name I heard of or saw every so often, usually mentioned in regard to biblical or catechetical enterprises. It was obvious many folks consider him to be he an intelligent, solid Catholic. Last year, I finally purchased one of his works bearing the fascinating title, How to Destroy Western Civilization and Other Ideas from the Cultural Abyss. The title sounds exploitative, but I was impressed with this series of essays. I enjoyed most of all his reflection on Edith Hamilton, whose wonderful book Mythology was one of my favorite reads at the age of 12. She was so great an agnostic, says Kreeft, that, in describing Socrates’ views on God, the worst thing she could call the Greek sage was “an evangelist”!

Very soon thereafter, I came across various videos of him conducting lectures or presenting talks. Of these, let me suggest downloading his “Shocking Life of Jesus” on YouTube to hear said something you maybe have yourself thought — when the name of Jesus is brought up at parties, the temperature changes, getting either very hot or exceedingly chill. Of his interviews, I suggest those of Kreeft on YouTube’s “Pints with Aquinas” in which he tells 12 stories about St. Thomas; or hear him discuss Tolkien and Lord of the Rings and tell a few jokes.

The cuisine whipped up in Food for the Soul — Reflections on the Mass Readings, Cycle C is composed of a wide variety of side dishes, spiritual reveries meant to highlight each Sunday's entrees: the three readings chosen to instruct Catholics attending the Holy Sacrifice of the Mass. As it says in the title, Kreeft has chosen to expound upon the texts in Cycle C, the year devoted to the Gospel of St. Luke, the “beloved physician” as St Paul described his friend. The scholarly, insightful, Gentile evangelist is also a skilled writer whom Dante praised as scriba mansuetudinis Christi, “the illuminator of the gentleness of Christ.”

In his Gospel, St. Luke chooses to present Jesus as the merciful Redeemer, Friend to the lowly and downtrodden and Shepherd gathering stray lambs. He takes pains to name the women who followed and helped finance the mission of Our Lord. He also stresses the great importance of prayer by relating several parables in which the Savior insisted on “the necessity to pray constantly and never lose heart” (18:1).

Some of Kreeft’s musings are short and savory — and it is refreshing to see so influential a writer lament, if not actually decry, the sometimes poorly rendered translations found in the present lectionary. For instance, in the Gospel text for the Solemnity of the Virgin Mary, the Mother of God (Jan. 1), Kreeft refers to the episode chosen from St. Luke’s description of how “the shepherds went in haste to Bethlehem”; how “all who heard were amazed”; and how “Mary kept all these things, reflecting on them in her heart.” Dr Kreeft explains:

“Pondered” is a better translation than “reflected upon” because “pondering” is deep and “reflection” is not. Light reflects off the surface of the sea. “Reflection” happens in the mind, but Mary did this in her heart. “Heart” in the Bible does not mean surface feelings but the deepest inner self, the soul of the soul.

Other ruminations are rich and flavorful, as found in the 12th Sunday in Ordinary Time, when Kreeft comments on the first reading, taken from the prophet Zechariah 12:11, specifically “they shall look upon him whom they have pierced, and they shall mourn for him as one mourns for an only son”:

St. John saw, with his own eyes, the literal fulfillment of messianic prophecy as he stood by Christ’s cross and saw his dead body pierced with the soldier’s lance … For Christians the crucifix is the single most central image in history, the most important thing human eyes have ever seen. This is the worst thing that ever happened, and it should cause us to weep when we contemplate it for two reasons: because it is the greatest tragedy of all time, the death of God, the God of all life, and because it is the greatest moral evil, the greatest sin of all time, the deliberate torture and murder of the man who was God.

The first reading usually ties into the Gospel, in this case, about Jesus exhorting His followers to take their crosses daily to follow Him. Again, Kreeft has a talent for throwing out ideas to stimulate accurate contemplation of Holy Writ.

Accuracy is important to Kreeft, and he wants his readers to bring a love for accuracy to their scriptural perusals. In the second reading for the Fifth Sunday of Lent — St Paul to the Philippians 3:8-14 — Kreeft expounds upon the verse, “For His sake I have accepted the loss of all things, and I consider them so much rubbish, that I might gain Christ and be found in him …”

The key word in this passage is the word the New American Bible translates as “rubbish.” That makes it sound like a proper British snob word. The word in Greek is actually "skubala," not a slob word, not a snob word … The old King James Version dared to translate it literally, as “dung.” There it is, right in the Bible … In inspiring St. Paul to use that s-word … God knew and intended it to shock us. To remove the shock and change it into a polite word is not an act of piety but of propriety … Compared to Christ, everything is almost nothing.

To be in Christ is to want for nothing else.

Word on Fire, the publisher, is the brainchild of Bishop Robert Barron, harnessing “goodness, truth, and beauty to draw people into or back to the Catholic Faith,” according to the organization's website. They have done a superb job in creating Food for the Soul as a very handsome publication. The book’s lightly mottled pages suggest parchment and maroon cover resembles that of the 1966 Doubleday edition of The Jerusalem Bible.

In a nice touch, Food for the Soul has a ribbon marker, as is found in the lectionary. Or as found in The Joy of Cooking. I’m not entirely sure which was the inspiration for its addition.

Sean M. Wright, MA, is an Emmy nominated television writer, a Master Catechist for the Archdiocese of Los Angeles, and is a member of the RCIA team at Our Lady of Perpetual Help parish in Santa Clarita, California. He responds to comments sent to [email protected]