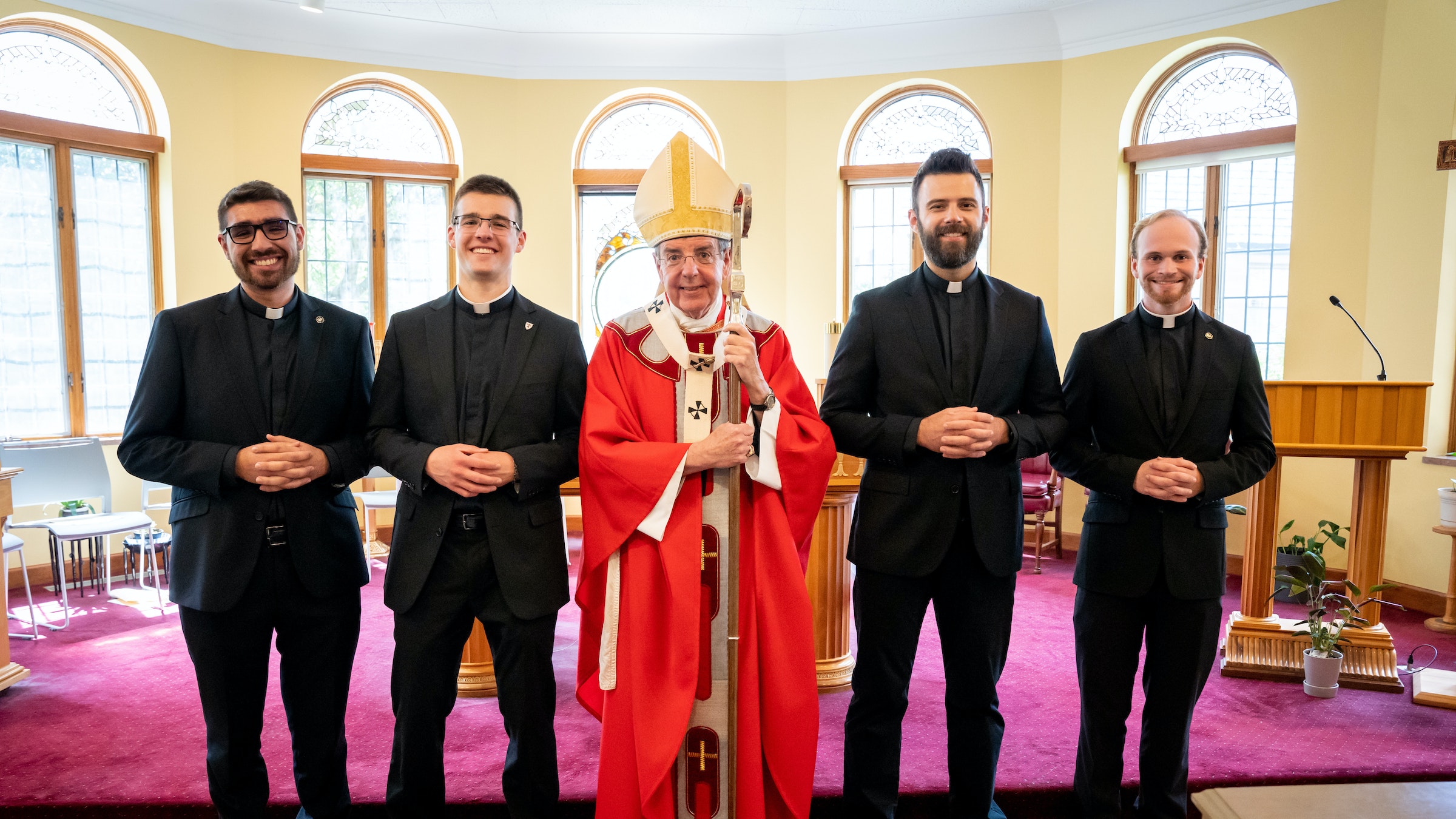 BLOOMFIELD HILLS — Four seminarians from the Archdiocese of Detroit pledged their intention to continue formation for the priesthood during a Candidacy Mass at Manresa Jesuit Retreat House in Bloomfield Hills on Aug. 10.

Lizandro Barba of St. Alfred Parish in Taylor, Karl Finkbeiner and James Musgrave, both of Our Lady of Good Counsel Parish in Plymouth, and Daniel Whalen of Our Lady of Refuge Parish in Orchard Lake are set to begin their first year of theology at Sacred Heart Major Seminary in Detroit.

During the Rite of Candidacy, the four men pledged to Detroit Archbishop Allen H. Vigneron their commitment to continue their discernment in a ceremony the archbishop likened to the Rite of Betrothal, where no formal vows are made, but a man and woman publicly state their intentions to marry. 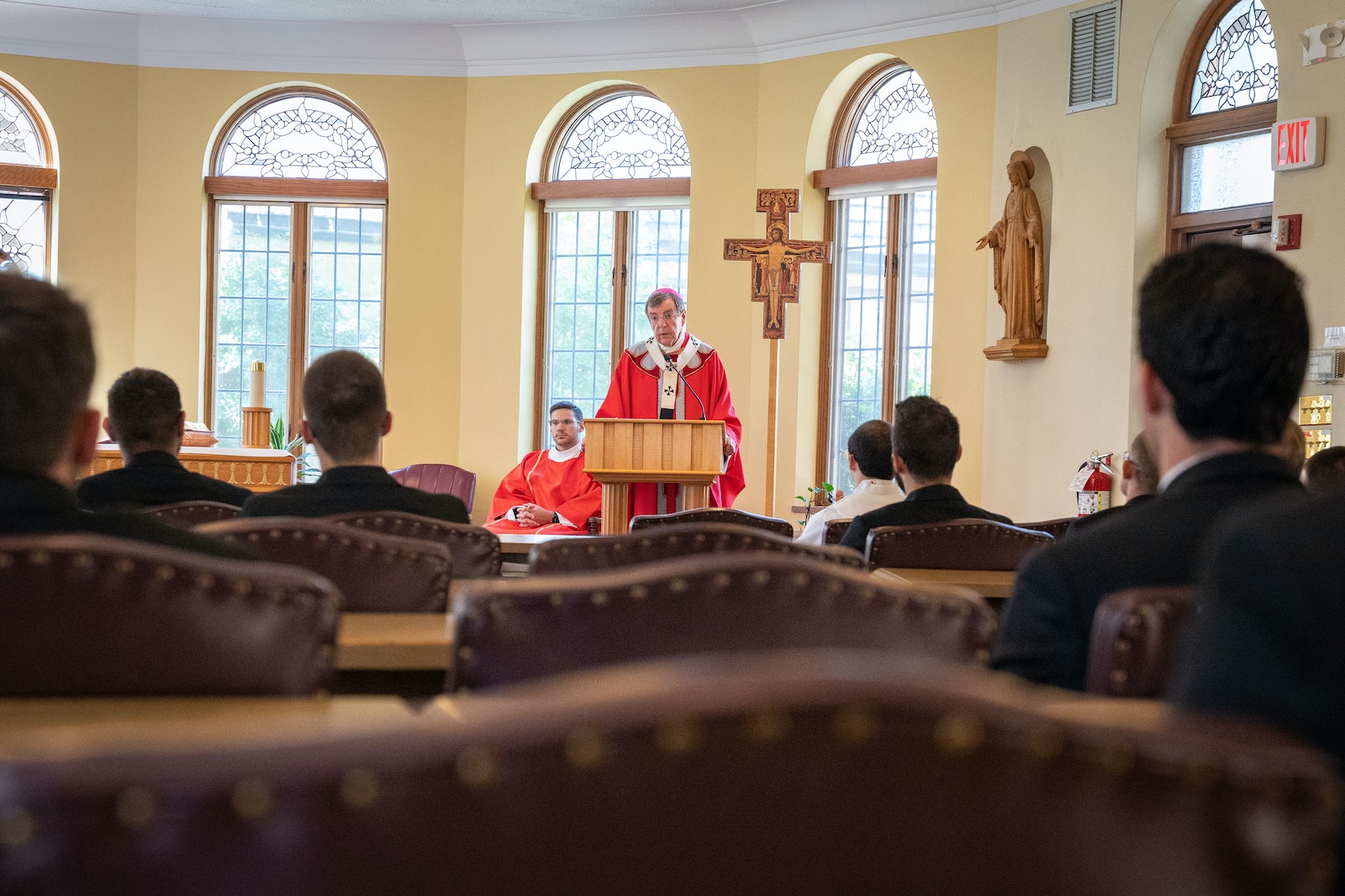 Detroit Archbishop Allen H. Vigneron preaches a homily during the Mass of Candidacy for four Detroit seminarians Aug. 10 at Manresa Jesuit Retreat House in Bloomfield Hills. The men, who will begin theology studies at Sacred Heart Major Seminary this fall, are now entering a more "public phase" of their discernment.

The Rite of Candidacy means the seminarians will begin a more “public phase” of their formation as archdiocesan seminarians; notably, they will wear clerics on the seminary grounds as part of the next step toward, God willing, priesthood.

“It is right, it is fitting, that we should acknowledge this milestone in your advance to priestliness and priestly orders,” Archbishop Vigneron said. “But it has consequences as well, as all things in life that are significant have consequences. Lizandro, Karl, James, Daniel, you are making a commitment to be more intently focused on what lies ahead.”

Fr. Craig Giera, director of priestly vocations for the Archdiocese of Detroit, told Detroit Catholic the Rite of Candidacy is the point at which the archdiocese recognizes seminarians as true candidates for the priesthood.

“As the archbishop said in his homily, there are no guarantees, as both them and the Church are still discerning, but this a formal act in which they say, ‘I am a man the Church is recognizing as moving toward priesthood,’” Fr. Giera said.

The milestone moment in the formation process allowed the four men to reflect on how their lives have changed in their time already spent at the seminary, completing their college studies in the cases of seminarians who didn’t already have a bachelor’s degree, or their two years of philosophy studies. 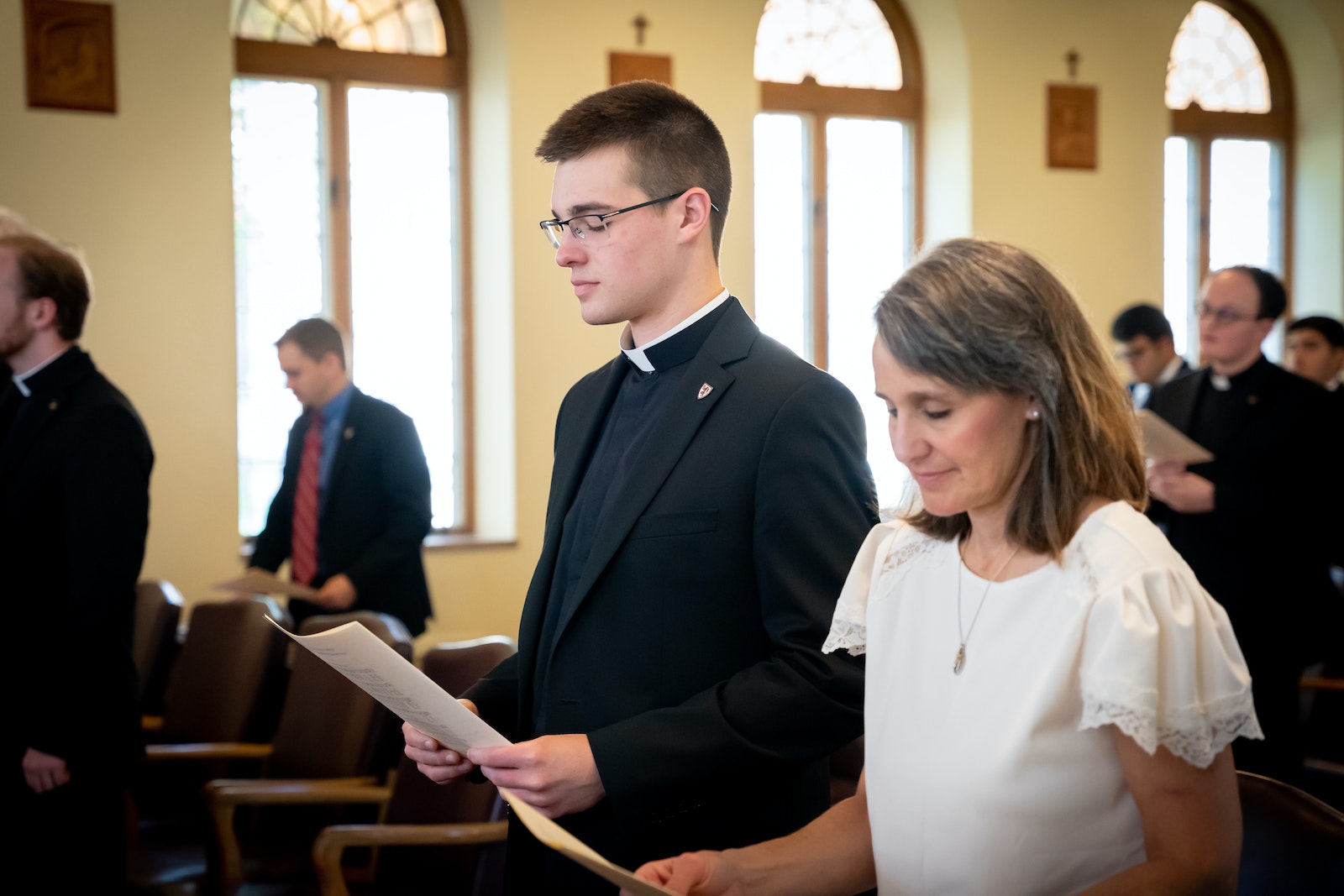 Seminarian Karl Finkbeiner of Our Lady of Good Counsel Parish in Plymouth wears clerics as he and his family pray during the Mass of Candidacy.

“One of the most meaningful and life-changing experiences I’ve had over the past two years has been my small group fraternity (at the seminary),” Musgrave said. “Having a space to be authentically human with a group of brothers and fellow disciples with whom I can be vulnerable, have deep and meaningful conversations, and pray has been affirming and life-giving.”

During a year in which the Archdiocese of Detroit had no priestly ordinations, this year's candidates for potential ordination said a deep sense of prayer and encouragement from the lay faithful have bouyed their discernment.

“Prayer has been the backbone to my formation and studies,” Whalen said. “The Lord has continuously supported me through my studies and formation to stay strong and firm in my calling toward the priesthood.

“My advice to any man who has thought about being a priest is to ask a priest about this calling,” Whalen added. “Then, he should explore this calling by talking to the director of priestly vocations or seminarians, because God is able to speak through other people to aid in our purpose in life to serve God.” 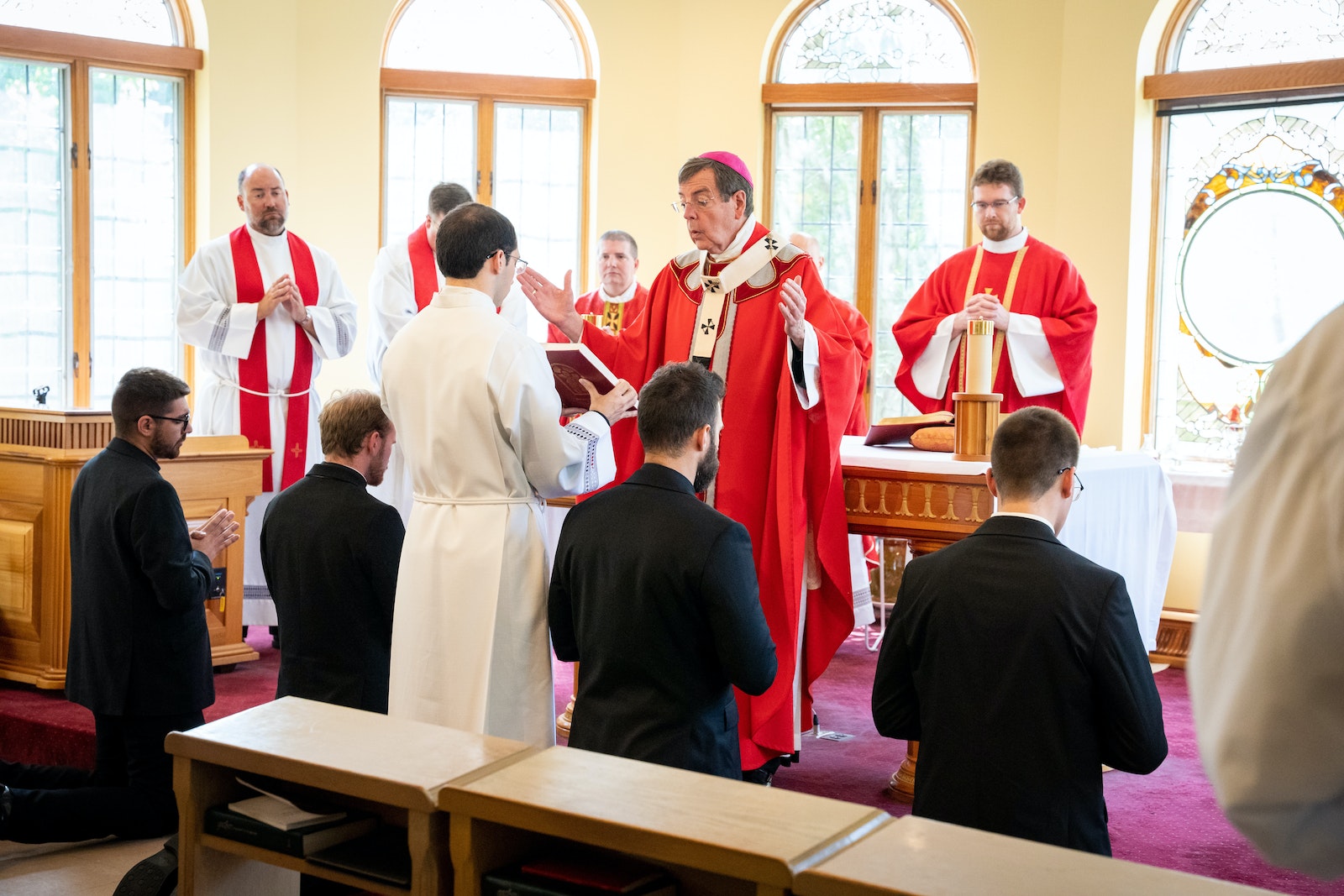 Archbishop Vigneron prays over the four men during the Rite of Candidacy. The annual Mass is similar to the ancient Rite of Betrothal, the archbishop said, during which no vows are taken, but a couple continues to discern their vocation in a more public fashion.

Before the Rite of Candidacy, the four men wrote hand-written letters to Archbishop Vigneron expressing their interest and authentic desire to continue to study for the priesthood. The archbishop reflected on common themes that came up in those four letters.

“One of the things I noted in the letter(s) you wrote to me is that ... you have a sense that you are loved by God the Father, and He has brought you to this hour,” Archbishop Vigneron said. “Also, that you see this experience of admission of candidacy as a pledge to love ever more intently. I might put it this way: this rite is a way to acknowledge you are called by your beloved and you respond in love.”

Archbishop Vigneron remarked how the Rite of Candidacy took place during the feast of St. Lawrence, a third-century deacon-martyr who was willing to give his life in order to preach the Gospel on the streets of Rome.

“The feast of this great archetypal minister of the Gospel, the martyr Lawrence, reminds us of the Paschal mystery, the mystery of Christ dying and rising and how it is at the core of who we are and what we are about,” Archbishop Vigneron said. “This is what the Church exists for; this is the goal for which you aspire in your priesthood — the pastoral mission is about serving the Paschal mystery, about living it. This is who we are and we do.”