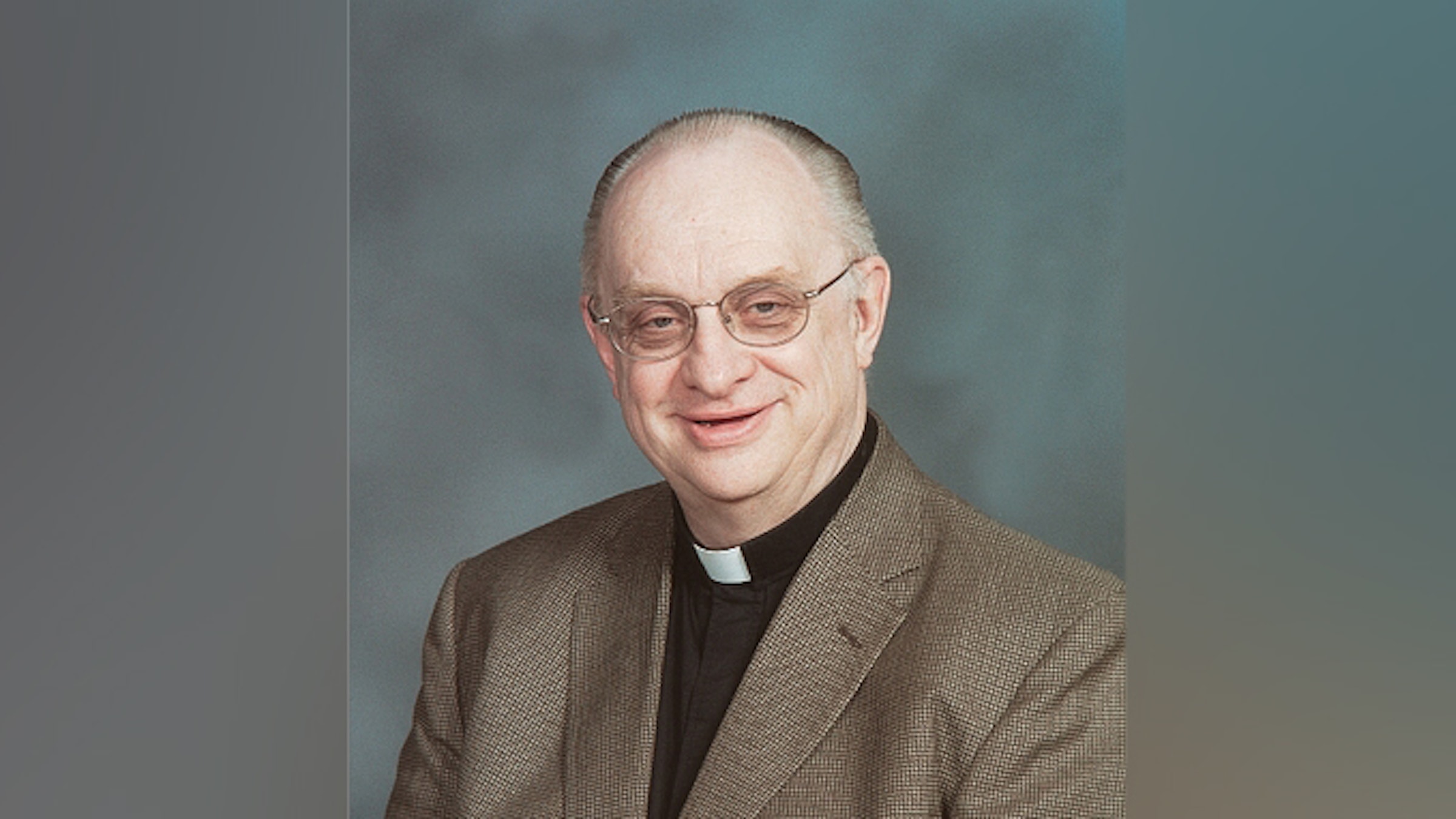 Fr. James Wieging, who ministered to families who lost loved ones during the Northwest Airlines Flight 255 disaster at Detroit Metropolitan Airport in 1987 as well as in New York City on Sept. 11, 2001, died Aug. 11 at the age of 79. Fr. Wieging was a priest of the Archdiocese of Detroit for 54 years, serving four decades as pastor of Our Lady of Lourdes Parish in River Rouge. (Archdiocese of Detroit photo)

Priest who ministered to families after Michigan’s 1987 plane crash, dug for survivors in wake of 9/11 remembered for heroic compassion

ECORSE — As the news of Michigan’s worst air disaster in history began reaching the ears of area residents the evening of Aug. 16, 1987, Fr. James Wieging was already en route to Detroit Metropolitan Airport.

The pastor of Our Lady of Lourdes Parish in River Rouge and chaplain of the Wayne County Sheriff’s department had heard about the deadly crash of Northwest Airlines Flight 255, and he knew he was needed.

When another chaplain phoned to ask for help at the scene, Fr. Wieging didn’t hesitate.

As the families of 156 people who perished desperately awaited word about their loved ones, Fr. Wieging comforted them, keeping vigil into the early morning hours the next day, holding candles, consoling grieving families, praying with those on the ground and listening and crying with friends and relatives.

“My parents actually met him the night of the plane crash,” recalled Tony Zanger, a member of St. Mary Parish in Monroe and the brother of Michael Zanger, who died in the Flight 255 crash along with Michael’s fiancée, Hollins Langton. “He said, ‘I’m here for you.’ And he was. He never left us.”

Over the next 34 years, Fr. Wieging refused to leave, helping organize and ministering to a support group of families that formed shortly after the crash.

It wasn’t until his death on Aug. 11 that Fr. Wieging, 79, ended his decades-long service as a chaplain and friend to those whose lives were irreversibly changed that day.

“I feel today a sense of great loss; it’s like another pall of sadness has overcome our family members,” Zanger added. “Our family and my brother’s fiancée’s family seemed to connect extra specially with him.”

Fr. Wieging was a priest of the Archdiocese of Detroit for 54 years, ordained June 3, 1967, at the Cathedral of the Most Blessed Sacrament.

After brief assignments as associate pastor of St. Lawrence Parish in Utica (1967-71) and St. David of Wales in Detroit (1971-73), Fr. Wieging became pastor of Our Lady of Lourdes in River Rouge, where he remained for the next four decades until the parish merged with St. Francis Xavier in Ecorse to form St. Andre Bessette Parish in 2012.

In addition to his parish work, Fr. Wieging served as a chaplain of the Detroit Police Department and the Wayne County Sheriff’s Department — where he was serving at the time of the plane crash — and later became a chaplain at the airport itself.

Because of his experience ministering to Flight 255 families, Fr. Wieging was asked by the FBI to counsel first responders at Ground Zero in New York City after the Sept. 11, 2001, terrorist attacks. He remained there for two weeks — including over his 60th birthday — searching for survivors, comforting families and praying with first responders.

“The compassion this man had for everybody was just impeccable,” Zanger said. “He was cleared by the FBI to go to Ground Zero on 9/11, and he grabbed a shovel and helped dig for survivors. When he found human remains, he blessed every one of them.”

Even at his parish, Fr. Wieging’s penchant for saying the right thing at the right time helped Sharon Resst and her daughter cope with the grief of losing her daughter’s father unexpectedly.

“When my daughter’s father passed away, I couldn’t think of a better priest to help us through that,” said Resst, bookkeeper at St. Andre Bessette Parish in Ecorse who worked with Fr. Wieging for two years from 2010-12 at St. Francis Xavier in Ecorse. “The words he used stuck with you.”

Fr. Wieging wasn’t the timid type, those who knew him admit.

His matter-of-fact, pull-no-punches personality allowed him to cut to the chase, both in his personal life and his parish work — a trait those around him appreciated, even if they didn’t always like what he had to say.

“He was a very strong, independent individual,” Zanger said. “He never beat around the bush. If you had a question, he would answer it. You didn’t always get the answer you wanted, but he gave you an answer.”

Despite that, Fr. Wieging had a soft side, Resst said. For instance, he loved to collect teddy bears and figurines, which he kept catalogued in the parish rectory.

“He loved children,” Resst said. “When he first was appointed pastor (at St. Francis Xavier in 2011), he wanted to have a social gathering, but not anything fancy. He wanted animal crackers, fruit punch and a balloon release for the kids. He was very, very simple.”

Born Sept. 27, 1941, in Monroe, Fr. Wieging lived in Ohio as his father served in World War II. Returning to Michigan after the war, the family settled in Ecorse, where the young James Wieging attended St. Francis Xavier Parish and school — the same parish he would return to lead half a century later.

After graduating from Sacred Heart Seminary High School and College and St. John’s Provincial Seminary, he was ordained a priest in 1967.

Fr. Wieging was appointed pastor of nearby Our Lady of Lourdes Parish in 1973, at the time the youngest pastor in the archdiocese at age 31. He remained at Our Lady of Lourdes for 39 years, guiding the parish through the difficult process of closing its school, demolishing its old church and the construction of a new church.

In 2011, he took over responsibility for St. Francis Xavier as the two parishes began the process of merging. Over the years, Fr. Wieging also served as temporary administrator of St. Timothy in Trenton, Our Lady of the Woods in Woodhaven and St. Elizabeth in Wyandotte.

In addition to his parish and chaplaincy work, Fr. Wieging taught in the religious studies department at Madonna University in Livonia for 26 years, and was the state chaplain of the Daughters of Isabella. He served for 46 years as a member of the International Conference of Police Chaplains, including as its vice president in 1981 and president in 1983.

Fr. Wieging is survived by his sisters Lucille (Dave) Pohlman of Delphos, Ohio, and Barbara (Mike) Meachum of Conifer, Colo. He is also survived by his honorary son Nick (Nikki) Zajas of Howell; nephews and nieces. He was preceded in death by his parents Albert and Mildred (Hoersten) Wieging, his sister Janice (Robert) Conrad and her daughter-in-law Darlene Conrad.

His funeral Mass was celebrated Aug. 17 at St. Andre Bessette Parish in Ecorse. Burial is in Mount Carmel Cemetery in Wyandotte.

Zanger said the families of Flight 255 have braced for the day when Fr. Wieging would no longer be around — but that doesn’t make the loss any easier.

“I just feel very lost without him,” Zanger said. “He even said to me once, ‘You know, there's going to come a time when I'm not going to be here,’ with his big burly voice that he had. And I said, ‘Father, what are we supposed to do?’ And he said, ‘You family members will figure it out, and I expect that you will carry on.’ And that's what we're going to do.”