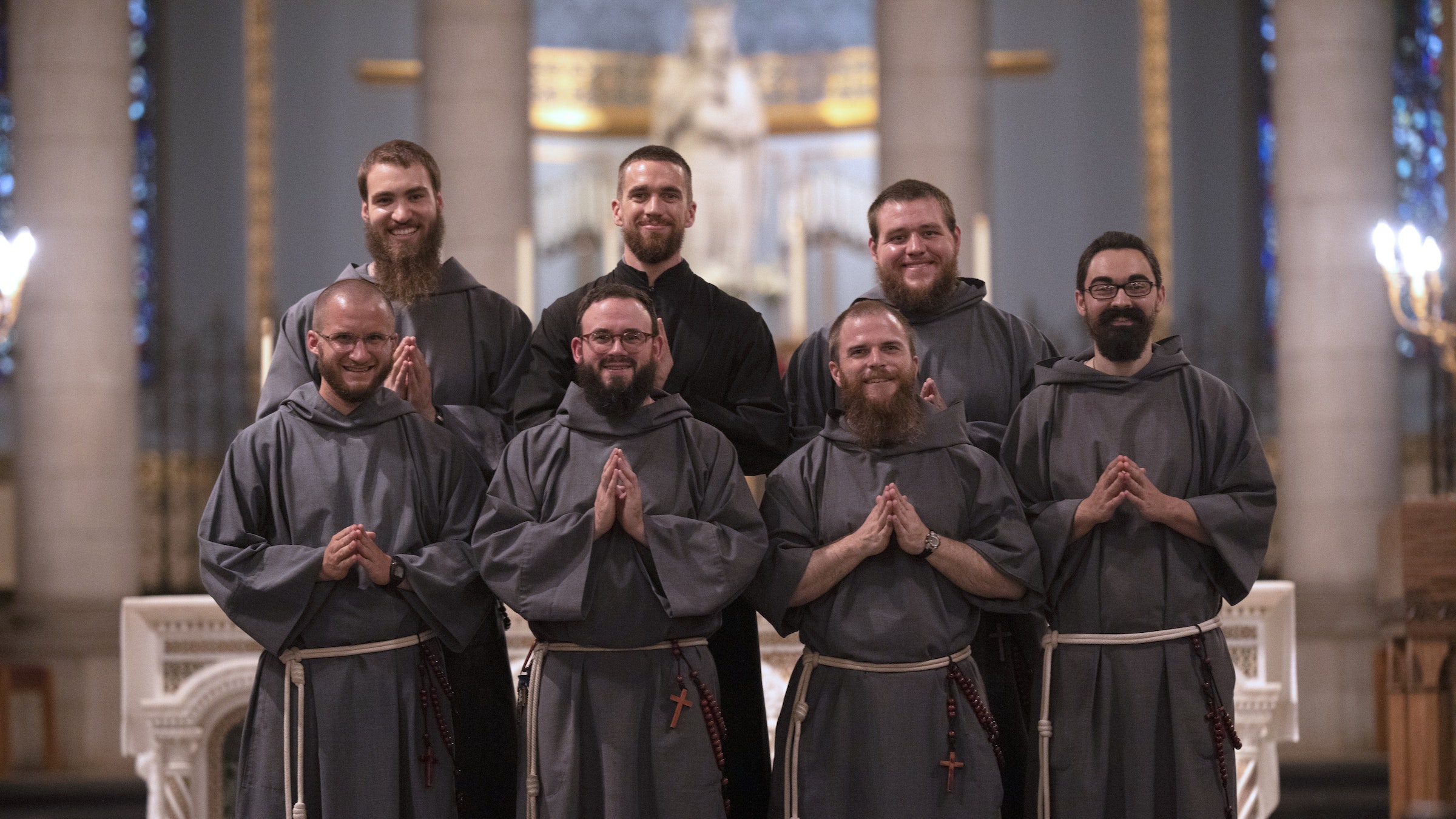 DETROIT — When a parish marks 175 years, one would think it’d be a time to rest on its laurels, to be regarded as a stately, venerable institution, never changing in the way things are done.

Not so at St. Mary of Redford, which is closing its milestone year by totally changing things up.

This month, the parish welcomes five student brothers from the Franciscan Friars of the Holy Spirit, a fairly new religious community based in Arizona, to live in the parish's rectory.

Fr. Athanasius Fornwalt, FHS, a member of the community of preaching friars dedicated to the new evangelization, has been serving as parish administrator since July 1.

The Franciscan Friars of the Holy Spirit were founded in 2016 in the Diocese of Phoenix with the intent of serving as missionaries to evangelize the southwestern U.S., particularly the Native American population.

According to the friars' website, the community is called by God to “preach penance,” to “minister to and live among the poor,” to “work in ecumenical outreaches,” and to “evangelize with a special focus on praying with others for the baptism in the Holy Spirit and fostering a personal relationship with Jesus Christ.”

At the recommendation of Phoenix Bishop Thomas Olmstead, the community began sending its seminarians to study at Sacred Heart Major Seminary, which offers a unique emphasis on the new evangelization.

Fr. Fornwalt became the first member of the budding community to be ordained to the diaconate in 2016, and then the priesthood in 2017.

Since arriving in the archdiocese, the community had been renting space at Most Holy Trinity Parish in Corktown to house the Greyfriar's House of Studies, where the friars will learn about Franciscan spirituality, with seminarians commuting to Sacred Heart for theology classes.

This summer, Archbishop Allen H. Vigneron invited the community to take up residence at St. Mary of Redford, both to revitalize the parish and to create a new home for the growing community in the former parish school, which closed in 2006.

Fr. Fornwalt, who serves as master of clerics for the order, immediately fell in love with the historic church with its large rectory.

“The archbishop wanted there to be a more stable pastoral presence,” Fr. Fornwalt said. “It’s just an incredibly beautiful church.”

Before the friars could move in, however, Fr. Fornwalt had the formidable task of making the facility suitable. He sought contributions of cleaning supplies, bedding, beds, a dishwasher — all the necessities needed to make the facility habitable. People responded generously, even attending a July 14 cleaning day to tidy the church, the sacristy, and even the friars’ chambers.

“People have been very kind to me,” Fr. Fornwalt said, expressing particular gratitude to the parishioners of Our Lady of Sorrows in Farmington and St. Mary of Redford Alumni Association, who helped with the cleanup. “We’ve had tremendous support.”

On Aug. 12, Fr. Fornwalt was joined by Bro. Xavier Kozlowski, Bro. Paul Graupmann, Bro. John of the Cross Costantino, Bro. Elijah DeLello, Bro. Lawrence Hogue and David Beale, a postulant, who officially moved in after their summer break from classes.

In addition to daily Mass, the seminarians will follow the traditional horarium, or schedule, of prayer. Monday through Thursday, morning prayer (Matins and Lauds) will begin at 7 a.m. followed by Mass and evening prayer (Vespers) at 5 p.m. The public will be invited to join. A prayer schedule for Friday through Sunday is still being developed.

Fr. Fornwalt said St. Mary of Redford only has about 100 people attending weekly Sunday Mass, but the friars and seminarians hope to bump that number up in hopes of making the community more aware of the treasure in their backyard.

In addition, the friars hope to engage in street evangelization in the poor to middle-class neighborhood, going door to door to visit the sick, pray with people and help those in need.

The area surrounding St. Mary of Redford is predominantly Southern Baptist and nondenominational, as well as those who profess no faith at all. But the friars have had success with similar situations in Arizona, Fr. Fornwalt said.

Three days after their arrival — on Aug. 15 — the community celebrated the Solemnity of the Assumption with Mass and Vespers, including a Low Mass in the extraordinary form.

Immediately following the Assumption feast, the friars began a period of prayer and fasting known as St. Michael's Lent, an ancient penance lasting until the feast of St. Michael on Sept. 29, for the conversion of fallen-away Catholics.

The following Sunday, Aug. 18, the friars hosted an open house, allowing visitors to walk through the facility, including climbing the bell tower. Fr. Fornwalt said people will be impressed at how well the site has been spruced up, restoring it to its former grandeur.

Later, on Oct. 3-4, the friars will be marking the feast day of St. Francis of Assisi with a full schedule of activities. Finally on Nov. 3, they will close St. Mary of Redford’s 175th anniversary celebration with another day of activities.

Franciscan Friars of the Holy Spirit

For more information, visit StMarysofRedford.com or the Franciscan Friars of the Holy Spirit’s website at https://www.becomefire.faith/.