From Nigerian refugee to Capuchin priest: Fr. Anthony Kote-Witah is right where God needs him 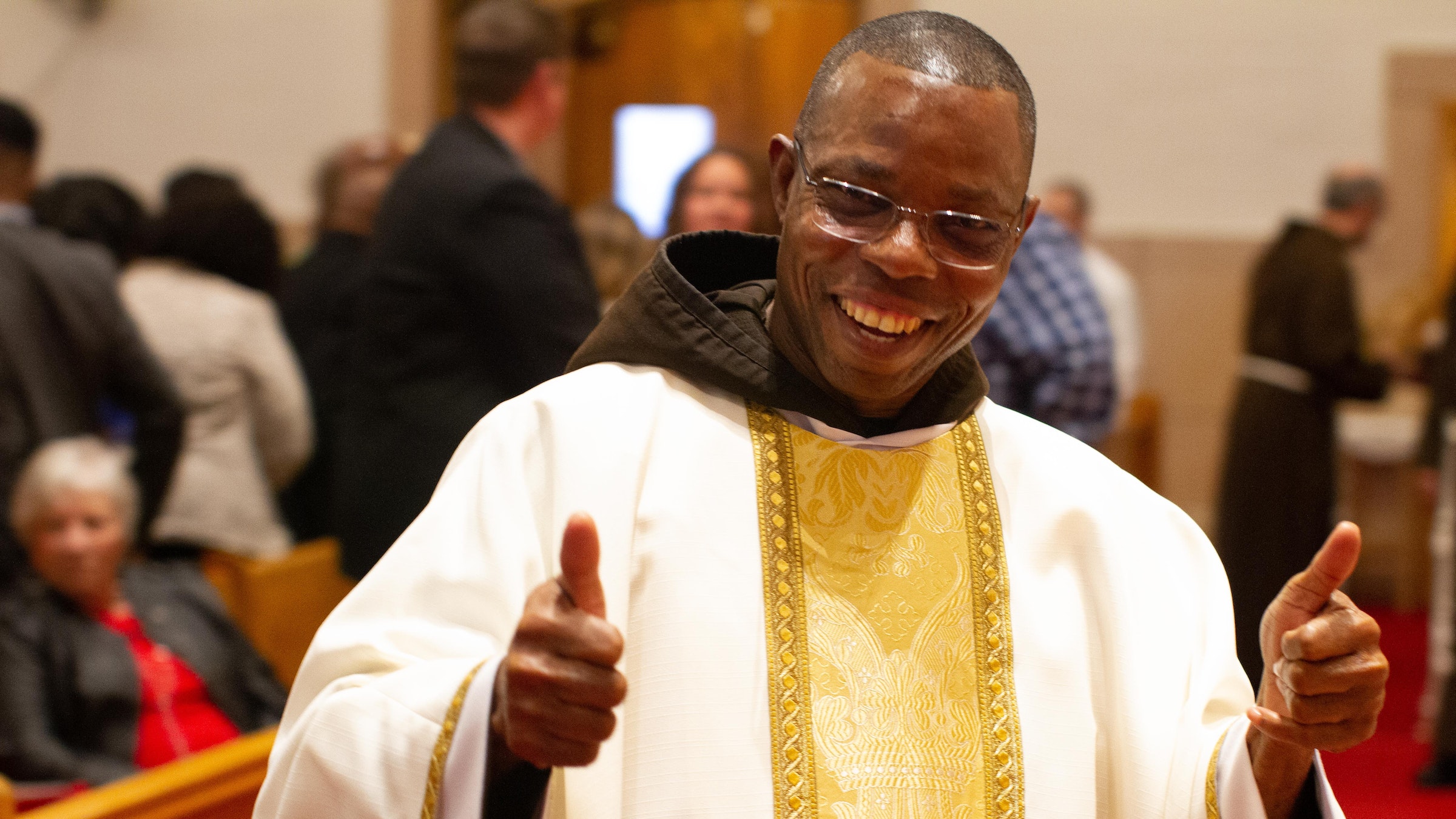 Fr. Anthony Kote-Witah, OFM Cap., is all smiles after his ordination to the priesthood at St. Clare of Montefalco Parish in Chicago on April 27. The Nigeria native who endured persecution in his homeland is now a Capuchin priest serving the poor and downtrodden at the Solanus Casey Center in Detroit. (Courtesy of the Capuchin Franciscan Province of St. Joseph)

DETROIT — When Fr. Anthony Kote-Witah, OFM Cap., first walked into the Solanus Casey Center, he knew it was where God was calling him.

The Nigerian native and human rights activist was discerning a vocation with the Capuchins in 2013 when he visited St. Bonaventure Monastery, and upon looking at the statues of human rights champions St. Oscar Romero, St. Teresa of Calcutta and Martin Luther King, Jr., he felt a sense of people he wants others to feel.

The Capuchin priest was ordained by Bluefields, Nicaragua, Bishop Paul Schmitz, OFM Cap., on April 27 at St. Clare of Montefalco Parish in Chicago for the Detroit-based Capuchin Franciscan Province of St. Joseph. He is now serving at the Solanus Center and assisting on the weekends at nearby St. Ambrose Parish in Grosse Pointe Park.

Fr. Kote-Witah has plenty of experience “smelling like the sheep.” Born into the Ogoni Tribe in southern Nigeria, Fr. Kote-Witah got a firsthand look at suffering and fighting for justice.

The Ogoni Tribe is a small, predominately Christian nation in Nigeria, a west African country with a population of almost 191 million roughly split between Christians and Muslims.

The Ogoni Tribe doesn’t have a lot of political influence with the majority-Muslim government, but their land has oil.

Nigeria became independent in 1960, and soon after, the government struck a deal with the Shell Oil Company to extract oil from Ogoni land. Shell got oil; the Nigerian government got money; the Ogoni got environmental devastation and poverty.

Seeing the surrounding ecosystem destroyed, Fr. Kote-Witah joined the Movement for the Survival of the Ogoni People, which in 1993, wrote the Ogoni Bill of Rights to demand an improvement to the area’s infrastructure and rights for the small nation.

“There was an operation to shoot on sight, no courts, no law really; the military would come in during the night and destroy villages and towns,” Fr. Kote-Witah said. “Most of our homes were patch houses, so they poured gasoline — from oil from our own soil — and set the place ablaze, roasting people on the inside. After that, we made our protests more seriously, others trying to escape. But without a passport, it's hard to leave your country. Fortunately, the United Nations recognized our plight and we had a place to go in Benin, a nearby country.”

Conditions in the refugee camp in Benin were dismal. Three to four families apiece shared small tents, and a bowl of rice was a monthly food ration. Disease was common. But in the camp, Fr. Kote-Witah said the Christian Ogoni still had hope.

“There were a lot of Catholics in Benin, and we invited the bishop to come celebrate Mass,” Fr. Kote-Witah said. “Right in the midst of that struggle, that is where were praised God the most. In the day and night, we were singing like crazy. There was so much energy, like Paul in prison, we were celebrating like crazy in the midst of the struggle.”

“I remember a lot of people would say to my uncle when he was alive, ‘You are never going to get married, never going to get children,’” Fr. Kote-Witah said. “He would laugh at them, saying, ‘I’m father of the entire parish. The doctors come to me for advice. The youth come to me, talk to me.’

“When the bishop was laying his hands on me during the ordination, I was thinking of what my uncle was saying,” Fr. Kote-Witah continued. “And then I had this vision of Our Lady, and she was pregnant, and then the vision was gone. I never had an idea what I saw, so I wrote it down on my journey about the encounter. But I reflect on it, and our Lady was present, about to birth Jesus. So are all the priests; we are also pregnant with Jesus. We present Jesus to the world. We share him with the world. This was my call to evangelize, right there as the bishop was laying his hands on me.”

With the memory of his uncle and a faith forged through oppression and relocation, the future Fr. Kote-Witah wound up in Lincoln, Neb., through Catholic Social Services, working in a few jobs while finishing high school. He enrolled in the University of Nebraska and later at Creighton University, working at a parish in downtown Omaha, Neb.

Fr. Kote-Witah was part of the Intercessors of the Lamb community in Omaha when he started studying at Sacred Heart Seminary and School of Theology in Franklin, Wis., just south of Milwaukee. But after the community was suppressed, Fr. Kote-Witah had a choice to make on where he’d go next.

His spiritual director learned about his desire to serve the poor, so he told Fr. Kote-Witah to investigate the Capuchins.

“When the depression happened in Detroit, the Capuchins stayed. I saw the world being done at the Solanus Center, people meeting God’s people, receiving the help they need, and that is when I knew this is where I had to be,” Fr. Kote-Witah said. “Everything was really simple; we didn’t separate ourselves, we bring people into the fold.”

Fr. Kote-Witah joined the Capuchins in 2013 and made his perpetual vows in 2018. After joining the order, Fr. Kote-Witah had spent most of his ministry in Detroit, serving in the soup kitchen, leading substance-abuse support groups and guiding spiritual retreats at the center.

Fr. Kote-Witah ministers to people who have gone through hard times — in a city that has seen its share of better days. But as Fr. Kote-Witah found hope through desolation, he tries to find that same light of Christ’s love in the lives of others.

“When you pass through hard times, it is a teaching lesson for you,” Fr. Kote-Witah said. “We’re made stronger thorough those experiences. I remember talking with my spiritual director about the pain I felt back home, but it is those pains that make me stronger today. And it is not only the negative experience, but the positive. Of all the things that happen to me, it is all great, like the military having to through training to do the best they can.

“In the 12-step program, and with the soup kitchen, I come across people who are depressed, many who want to commit suicide. But when they hear my story, seeing I survived, they feel they, too, can survive. And I stay with them, walking with them like a brother.”

“For me, talking about all that has happened is a blessing, because they are tools, a source for sharing,” Fr. Kote-Witah continued. “In the 12-step program, and with the soup kitchen, I come across people who are depressed, many who want to commit suicide. But when they hear my story, seeing I survived, they feel they, too, can survive. And I stay with them, walking with them like a brother.”

During his priestly ordination, Fr. Kote-Witah’s hands were blessed with chrism. Following Mass, Fr. Kote-Witah asked Bishop Schmitz if he could not wash his after the ceremony. He wanted to give the chrism on his hands to the people. He wanted to take the gift given to him and share it with the people around him.

“When I share my story, I’m saying if I can stand here today, you can stand here tomorrow,” Fr. Kote-Witah said. “I share what I got, in the core of my heart, so people can come closer to God. I tell people, the situations they find themselves are part of a process, a way of growing closer to God. Like the lives of Solanus Casey or Padre Pio, God gives us our lives, our love, to share with other people.

“That’s what it means to have this vocation, to be ready to share it with everybody,” Fr. Kote-Witah said. “I’m ready to go wherever my superior says to go. Because God always likes to use people to plant seeds; we’re not stagnant. We move where the Holy Spirit wants us to be. Maybe this is where he wants me now, but I’m ready to go where God wants me to go.”