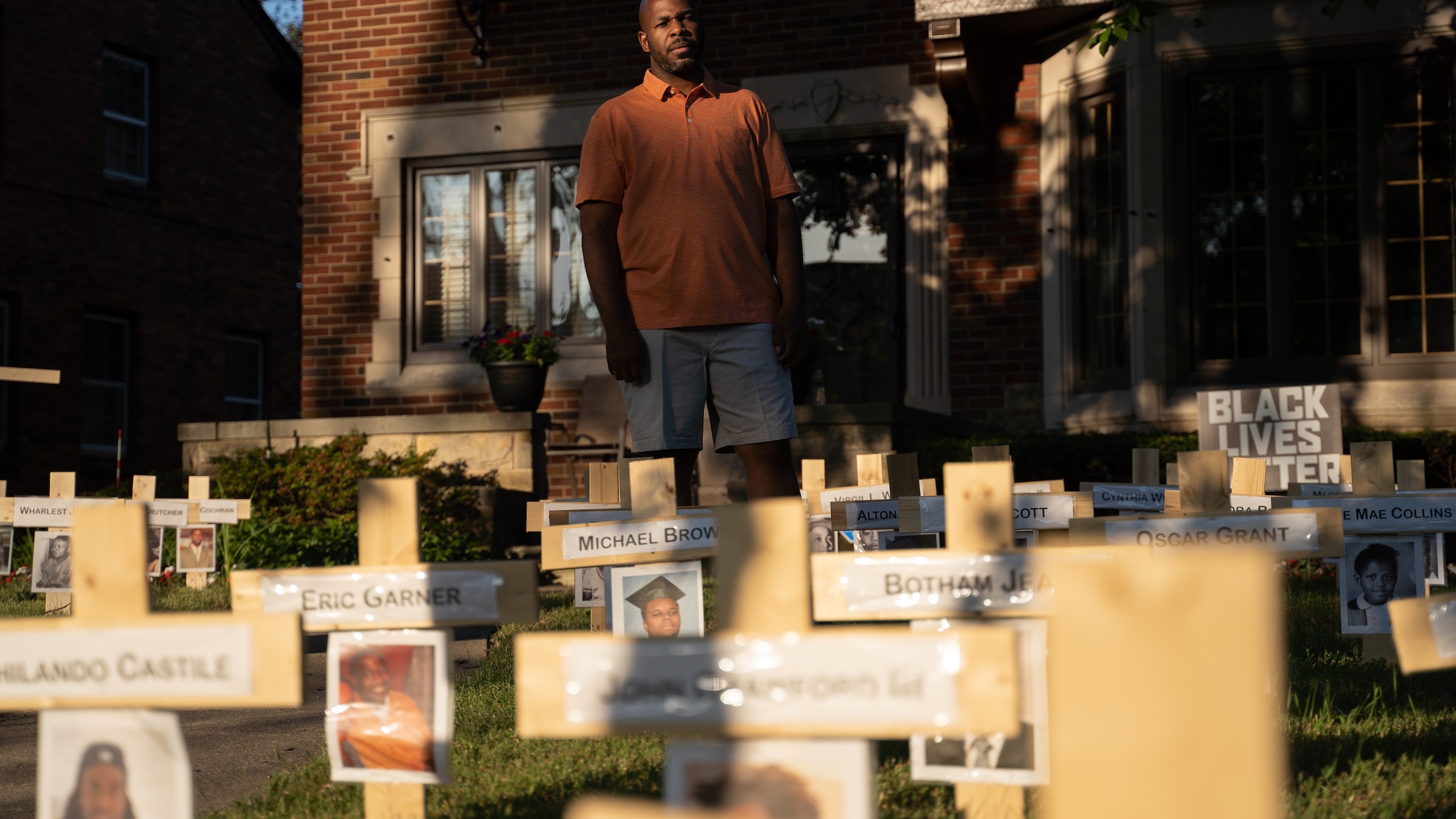 John Thorne, pastoral minister at Sacred Heart Parish and executive director of the Detroit Catholic Pastoral Alliance, created a memorial in his front yard for the black men and women whose lives have been taken unjustly over the years, complete with crosses bearing both their images and names. (Photos by Valaurian Waller | Detroit Catholic)

DETROIT — There is an African proverb that says, “As long as a person’s name is called, they never die.”

With the spirit of that proverb in mind, John Thorne, pastoral minister at Sacred Heart Parish in Detroit and executive director of the Detroit Catholic Pastoral Alliance, created a memorial in his front yard for black men and women whose lives have been taken unjustly, complete with crosses bearing their image and name.

Thorne’s homemade memorial not only serves as a remembrance, but also is a nod to African-American history and the all-encompassing meaning of the pro-life movement, he said.

Along with his 13-year-old son and a friend, Thorne built each cross and assembled the memorial in the front yard of his Detroit home. When he first spoke with Detroit Catholic, he had assembled 42 crosses with plans for more.

Thorne said it’s an opportunity for his son to learn and remember, especially because he is young enough to not know all of the stories and names.

“This is a part of our history, a sad and tragic part, but something that we must pay homage to and remember so that they are not forgotten,” Thorne said.

The names include historical figures such as Emmett Till, Martin Luther King Jr. and Malcolm X, as well as those from more recent collective memory, such as George Floyd, Breonna Taylor and Eric Garner. The list also includes names some might never have heard before.

“I wanted to draw attention to people who actually lived lives, who had names, who had children, who lived in communities, who had jobs, and whose lives were also taken,” Thorne said.

Because the memorial is so visible, Thorne said people often stop to look and sometimes talk with him. He hopes his efforts might inspire Catholic churches in Detroit to create similar memorials and help draw attention to the scourge of racism.

“People have died all around us, and a lot of times the Church has been completely silent,” Thorne said. He said he is heartened by the attention and interest that has been stirred over the last month, but he also hopes to see the movement continue even when the country isn’t in upheaval.

“If we are really going to seek racial healing, we have to do this every day of our lives,” Thorne said. “We have to march, we have to work, we have to pray, we have to have conversations with one another.”

Thorne said he approaches the issue from a pro-life perspective, both paying tribute to the lives lived and the lives they lost, remembering that such lives are just as important in the grand scheme.

“I think that in a way the movement has focused on the unborn, and we forget about those who are living,” Thorne said. “It is not just from natural conception to natural death; we also have to remember everything that happens in between, from that beginning to that natural end.”

Thorne said the black Catholic community takes a holistic approach to life: celebrating everything from baptisms to birthdays to anniversaries and graduations to everything in between.

For his part, Thorne calls upon the name of his daughter, who passed away six hours after her birth. “We still remember, we still call her name, we still ask her to intercede on our behalf,” Thorne said.

And while Thorne emphasized the importance of remembering children who were never born, the focus of his homemade memorial is on those who lived and died.

“We cannot forget about the injustices that were done to African-Americans over the course of 400 years,” Thorne said. “We cannot forget those who never had the dignity of humanity in life, whether they were slaves, whether they were looked at as second-class citizens, drinking from a water fountain that was separate and unequal. It is all of these experiences that remind us that (being pro-life) is so much more than defending unborn babies. It has to be the totality of it.”