Funeral, cemetery workers are 'salve to those who are suffering,' Fr. Riccardo says 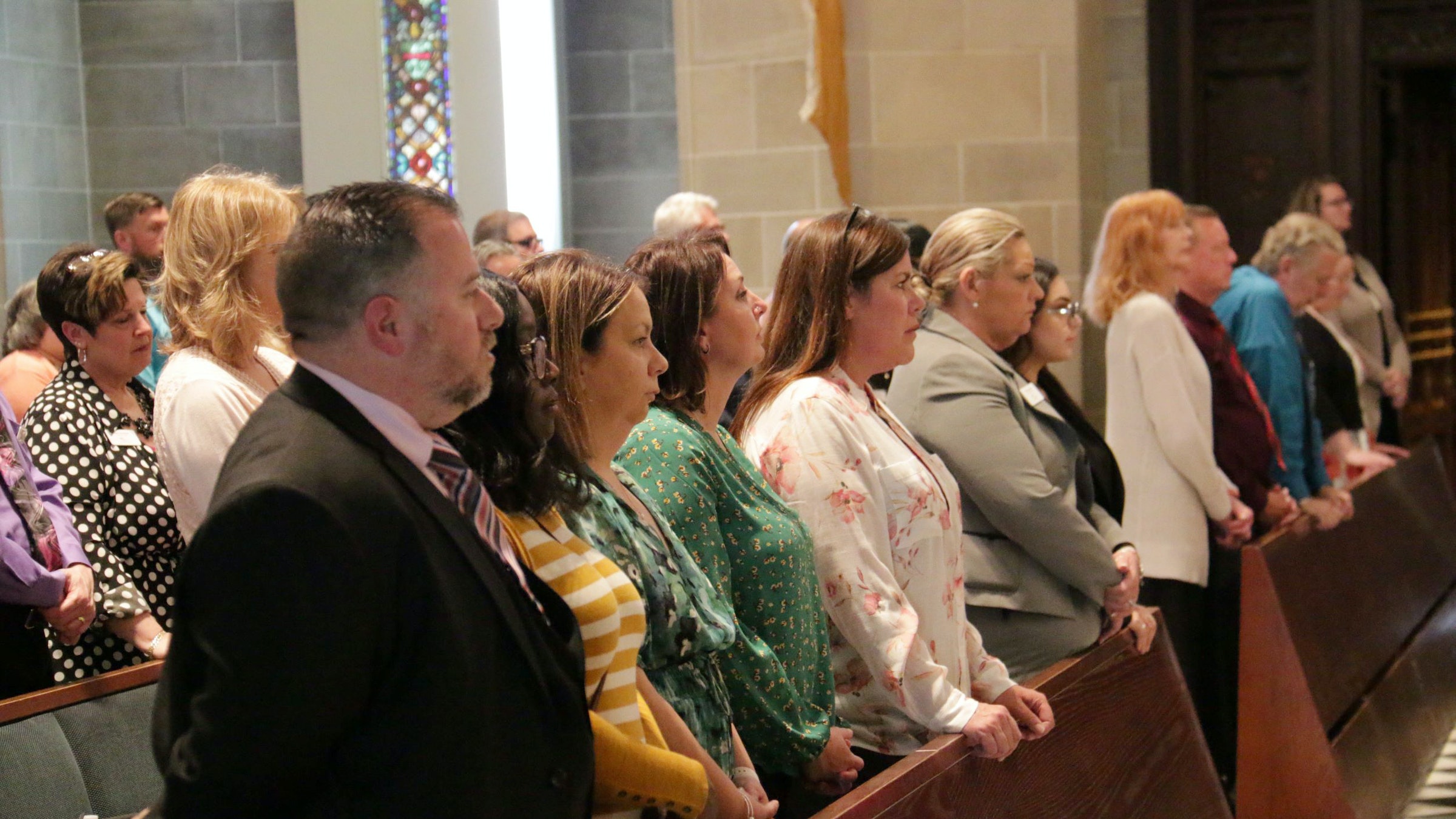 The Archdiocese of Detroit hosted Catholic Funeral and Cemetery Services' national town hall event May 12 at the Cathedral of the Most Blessed Sacrament. The town hall was attended in person by local CFCS employees as well as hundreds of virtual attendees from across the United States. (Photos by Michael Stechschulte | Detroit Catholic)

DETROIT — In a culture where people are deeply afraid of death and dying, Christ wants to use those tasked with burying the dead to be a salve to those who are suffering and to remind them of Christ’s paradoxical message — that by dying on the cross, he has defeated death for all.

That was the message delivered to hundreds of funeral and cemetery workers May 12 during Catholic Funeral and Cemetery Services' national town hall event hosted at the Cathedral of the Most Blessed Sacrament.

Local CFCS workers attended the afternoon event in person, while hundreds of virtual attendees from across the United States watched a livestream provided by the Archdiocese of Detroit.

The retreat began with Mass celebrated by Fr. John Riccardo, executive director of ACTS XXIX, and welcoming remarks from Bob Hojnacki, director of cemeteries in the Archdiocese of Detroit, along with a brief statement from CFCS founder and CEO Robert Seelig.

Seelig, who recently celebrated his 20th anniversary with CFCS, reminded his colleagues that theirs is a ministry of faith to which Christ has called them.

“Christ has shown his hand on my shoulder, and he's been sending me to do this work for 20 years,” Seelig said. “And so, I'd like you to imagine that when you're meeting with a family, you're serving one another (and) that Christ has his hand on your shoulder.” 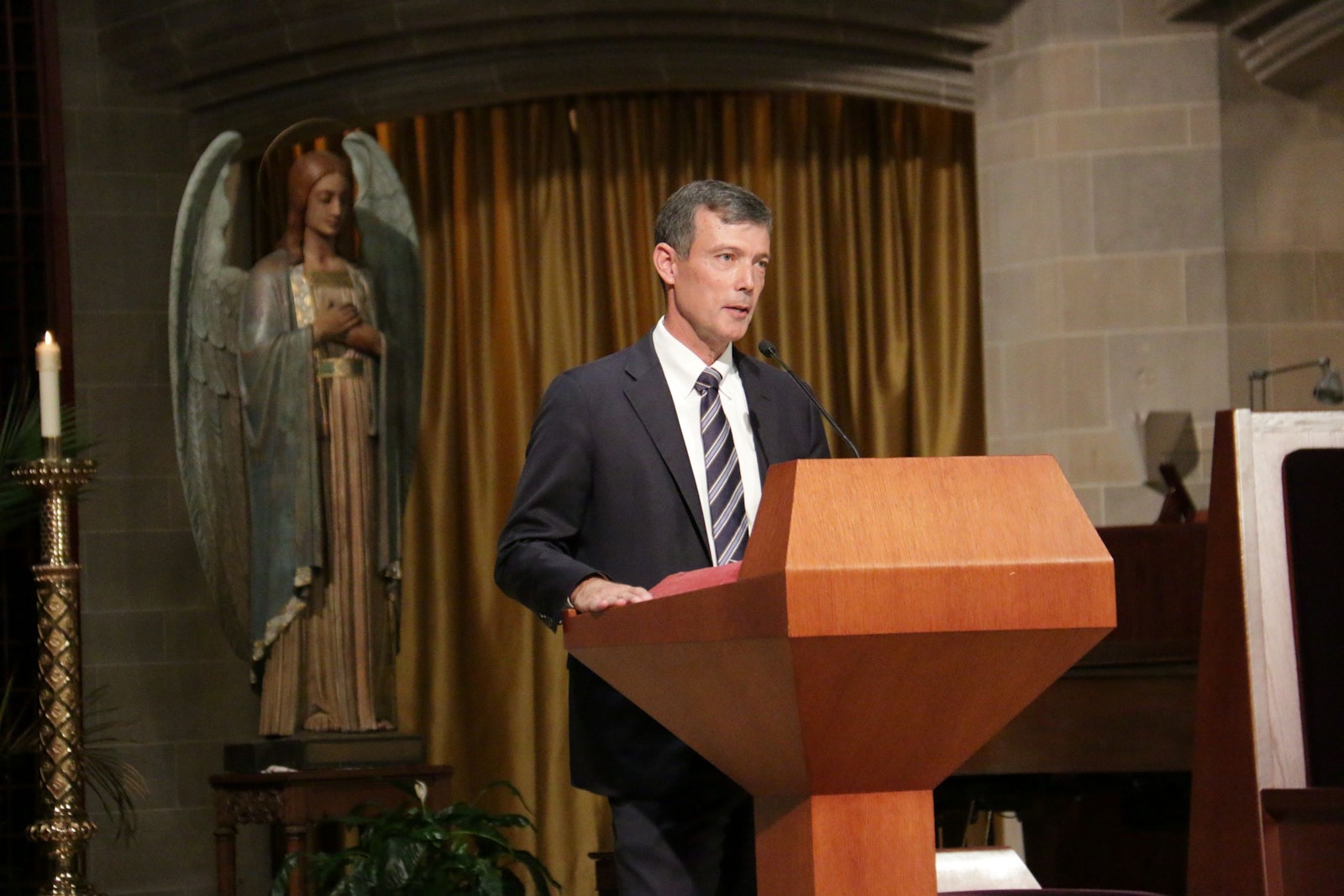 Robert Seelig, CEO and founder of Catholic Funeral and Cemetery Services, gives a brief statement to his colleagues. Seeling celebrated his 20-year anniversary with CFCS on Good Friday.

Fr. Riccardo opened his keynote address by empathizing with his listeners. Priests, like those who work in cemeteries and funeral services, are around death all the time, and it takes an emotional toll, Fr. Riccardo said.

Even with faith, this task can take its toll, Fr. Riccardo added.

“It can still be grating and challenging when infants die, when teenagers throw themselves in front of semi-trucks on the freeway, when spouses don't go together," he said. "So it's good just to be reminded of the fact that God is in control when He has us, and we don't have to be afraid.”

God hates death, Fr. Riccardo said, but He has done something about it by choosing to go to the cross, freely giving His life.

“(Christ being on the cross) is going to look like something disastrous is happening, but it only looks that way. It's going to look like life is chaotic, it's out of control, that there is no point,” Fr. Riccardo said. “It only looks that way. Life is not chaotic. It has a point. There is an author of the drama that is called history, which is ‘His story,’ and He knows what he's doing.”

From mankind's viewpoint, it might not always make sense, Fr. Riccardo said. Some might wonder why Jesus chose to be up on the cross, but by doing so, Christ has accomplished three things, Fr. Riccardo explained.

The first thing Christ accomplishes on the cross is show how much he loves us, Fr. Riccardo said.

“The message of the Gospel is really this simple: you matter to God. You're worth fighting for. In fact, you're worth dying for,” Fr. Riccardo said. “God just wants you to hear Him address you by name and tell you that He loves you.”

Secondly, Jesus is paying the price for our sins, Fr. Riccardo said. On the cross, Christ is atoning for the sins of everyone who has ever lived.

“We live right now in a culture that's fond of canceling people,” Fr. Riccardo explained. “God has his own version of cancel culture: He canceled sin, not people. He knows your sin; He calls you by name.”

Our culture defines us by our sin, but Christ makes all things new; he takes our sin and allows us to become the person we wish to be, Fr. Riccardo said. 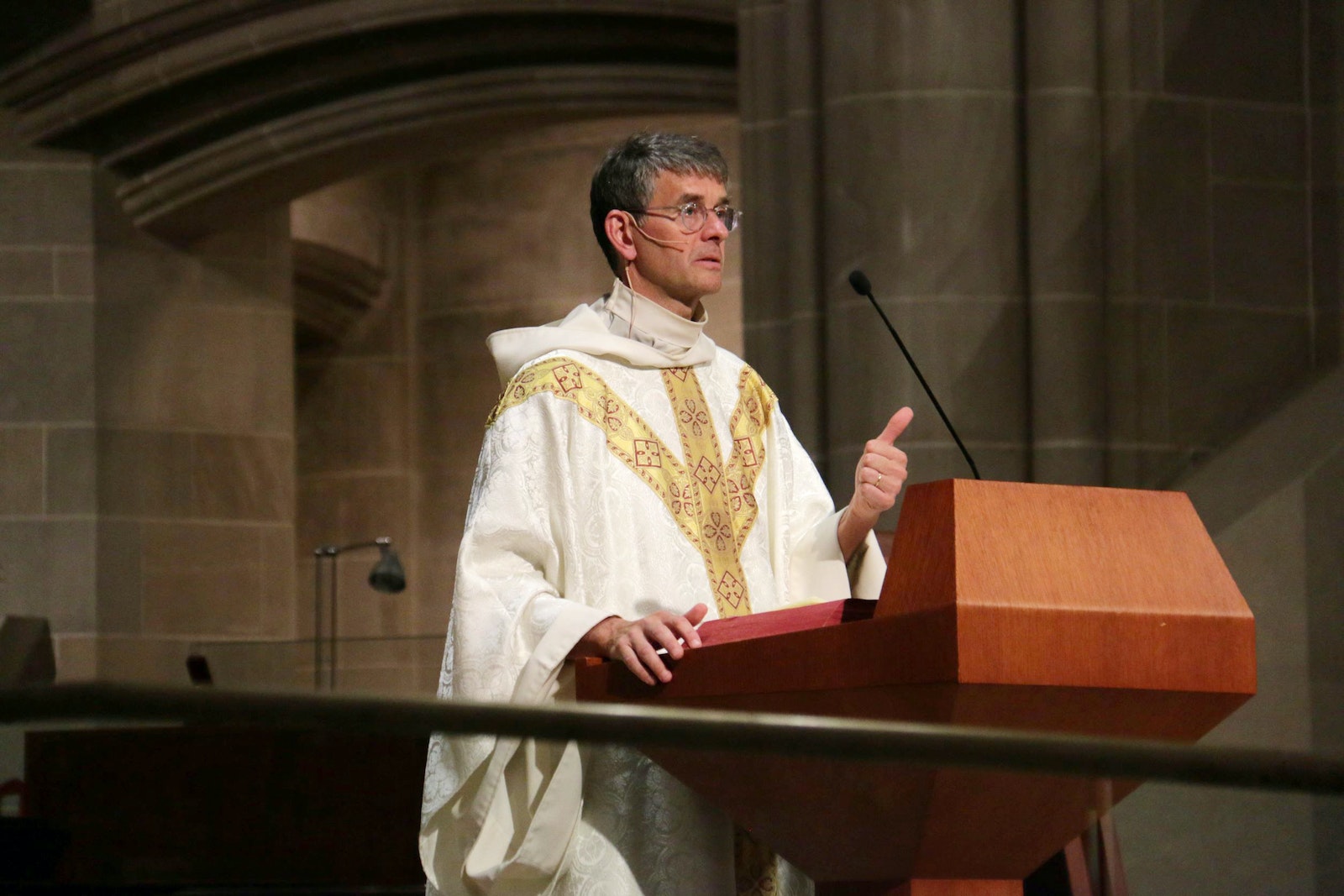 God hates death, Fr. Riccardo said, but he has done something about it by choosing to be up on the cross, freely giving his life so as to conquer death for all mankind.

Finally, Christ on the cross is going to war, Fr. Riccardo said. Jesus is engaging hell, Satan and death in a battle. He allows himself to die so that he can enter death and destroy it from within. Even though we will still die, death cannot hold us because Christ has done something about it.

​​”Over and over again in the Easter season, we say things like, ‘Death has no more dominion over him. He died once; he's alive now forever.’ Who else do you know you can say that about? So much is this true that the Christian actually taunts death. That's what St. Paul does in his first letter to the Corinthians. ‘Where's your sting? Where's your victory?’

This knowledge changes how Christians live and frees them from the fear of death, and allows them to grieve in hope, Fr. Riccardo said.

“Everybody grieves. It's just a question of how am I going to grieve? With hope or without hope?” he said.

Knowing Christ has conquered death allows those working in Catholic Funeral and Cemetery Services to walk with those who are grieving, Fr. Riccardo said, giving them a scriptural lens to make sense of suffering and death by letting Christ shine through them.

“For whatever reason, God has placed you, at least at this point in your life, in people's most painful moments, and he wants to use you as something like a salve, like an ointment that he can pour into their wounds to somehow give them strength and peace and hope in the midst of all their pain,” Fr. Riccardo said.

“This is a brutally hard mission," he added. "It's not for the faint of heart, but it is also a beautiful mission. It's a spectacular mission. And it's one in which I think if nothing else, the Lord through me right now simply wants to say to each and every one of you very personally, thank you for saying yes to it.”