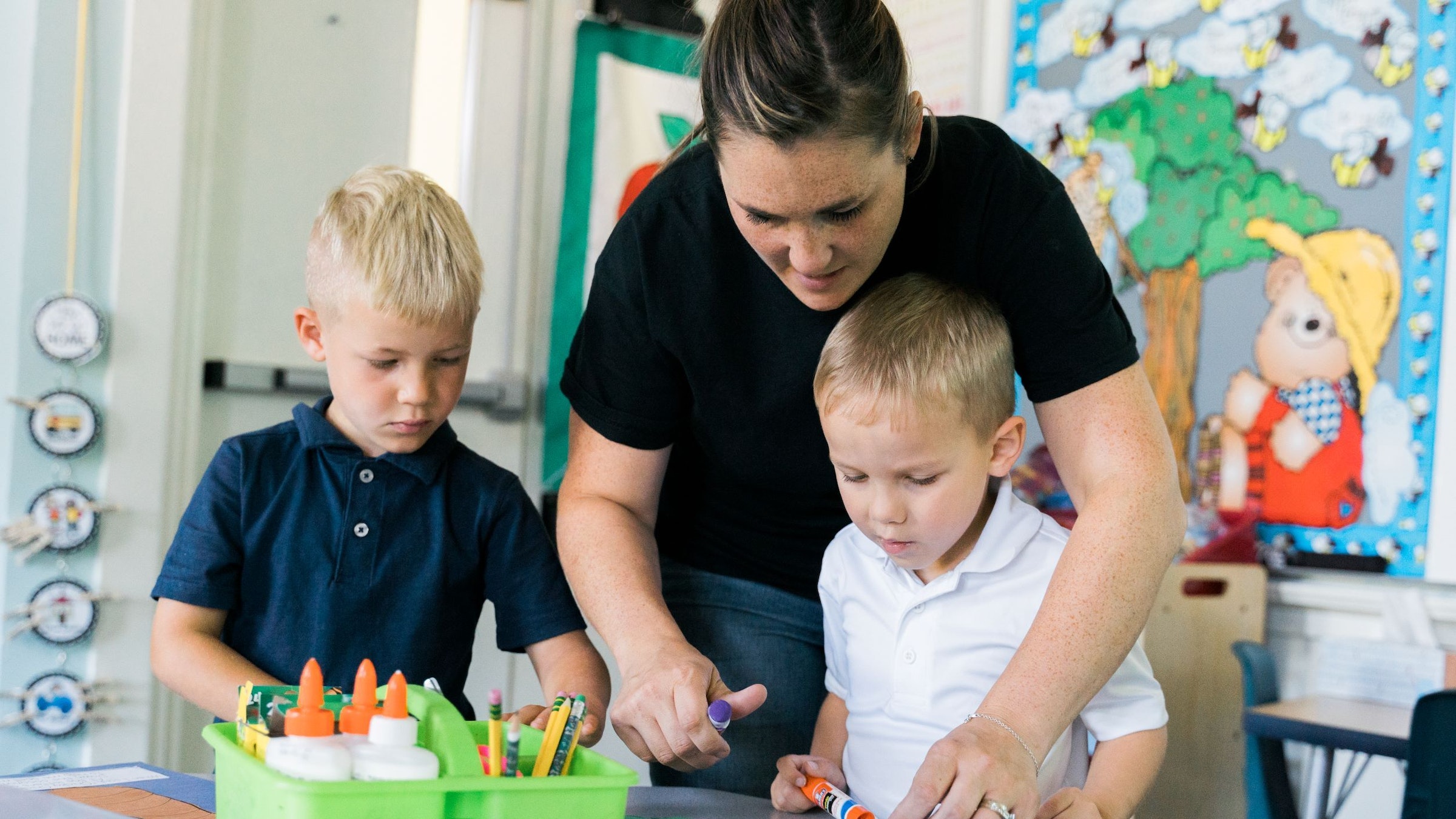 A teacher helps students with an assignment at St. Michael School in Monroe in this 2019 photo. The Michigan Catholic Conference says Gov. Gretchen Whitmer's recent veto of legislation to create education savings accounts in Michigan, while expected, betrays low-income Michigan families who could use the accounts to pay for non-classroom-related expenses. (Valaurian Waller | Detroit Catholic)

LANSING — Gov. Gretchen Whitmer’s veto of two bills earlier this month that would have created an educational savings accounts program was expected, but still disappointing for school choice advocates.

Educational savings accounts are financial vehicles donors could use to support education expenses, including tuition to a non-public school, that would offer a tax credit on the amount put into the account.

“We are disappointed the governor vetoed bills to create education savings accounts in our state,” said Tom Hickson, vice president for public policy and advocacy for the Michigan Catholic Conference. “This legislation would have helped parents and students in both public and non-public schools enhance their opportunities for educational success. Far too often politics is prioritized over education-related policy to maintain an antiquated status quo that no longer benefits families or helps students achieve greater academic outcomes.”

Gov. Whitmer told the Detroit News the bill would “turn private schools into tax shelters for the wealthy,” but Hickson said education savings accounts would support students in families that earn below 200 percent of the federal poverty line and could go to both public and non-public schools for education-related expenses.

“Education saving accounts is a policy we have seen in a lot of other states around the country, including Kentucky, where it most recently passed, and in Tennessee, where it passed in 2019,” Hickson said. “It allows people to donate to scholarship granting organizations, which would be a wide variety of nonprofits that would oversee ministering education savings accounts. Under this bill, it would be low-income individuals that would qualify.”

Education savings accounts are set up by nonprofit groups or organizations, such as the Knights of Columbus or a parish, where a donor could donate toward a scholarship fund that could cover tuition, fees for extracurricular camps, electronic devices, tutoring, counseling, and other education-related expenses.

Donors would then be allowed to claim up to a $5,000 deduction on their state income taxes for an individual filer or up to $10,000 for a joint return.

In order for a student to qualify for an ESAs, under the legislation, their family must be below 200 percent of the federal poverty level — that’s $53,000 for a family of four.

The money in the ESAs comes directly from the taxpayer, and the deduction is related to how much they pay to the state’s general fund, not Michigan’s School Aid Fund, an important feature of the bills, said David Maluchnik, vice president of communications for the Michigan Catholic Conference.

“Let’s say a group — like the Knights of Columbus — wanted to provide kids with grants to attend a public or non-public school and be able to afford certain items — like going to a science camp — because they felt it would be something good for the community,” Maluchnik said. “The organization would be the scholarship granting organization that would distribute those funds to the kids that apply for them. The money would come into the fund by donors, people who would make financial contributions, who write a check to the fund for the scholarship granting organization. And whatever amount your chick is for, you’d qualify for a tax break on state taxes.”

As the tax break is a reduction on the claimed income one pays to the state, education savings accounts would impact the Michigan general fund, where most income tax revenue goes, as opposed to the Michigan School Aid Fund, which is funded 41.2 percent by sales and use taxes, 19.1 percent by income taxes, 13.6 percent by property taxes, 11 percent from federal revenue and the remainder from state lottery funds, miscellaneous taxes, the general fund and other revenue sources.

“The ‘hit,’ if you will, to the states comes in the form of the general fund, but in a greater tax break for individual taxpayers due to their contribution,” Maluchnik said. “So less tax revenue would be coming into the state. It’s a difference with a distinction from the School Aid Fund, which funds public schools. This money would come from the general fund.”

The impact on the state’s general revenue would be dependent on the income and amount donated to an ESA, but Hickson reminds people an individual can only claim $5,000 in a tax credit, and a couple can only claim $10,000.

“A student that is low income could use these ESAs to go a science camp or do extra-curricular activities they wouldn’t be able to afford that require additional fees,” Hickson said. “You hear a lot of hyperbole or rhetoric that this is robbing money from public schools to give to non-public schools, saying this would be a back-door voucher. But it’s anything but that. Every student in Michigan who is low income, who’s 200 percent above the federal poverty level, could qualify for this funding to help them in their educational attainment outside the classroom, be it tutoring, textbooks, anything like that.”

Following Gov. Whitmer’s veto, a group, Let Kids Learn, is organizing a petition drive to collect enough signatures to circumvent the veto. The group would need to collect more than 340,000 signatures, or 8 percent of the votes from the last gubernatorial election in Michigan, to present the petition to the legislature, which in turn has the power to approve the legislation without the governor’s input.

If the legislature fails to take up the petition, or votes it down, the petition would than appear as a proposal on the 2022 general election ballot.

“They have already made clear, even before the governor vetoed the bills, that they were going to launch a statewide petition drive to put a citizen’s initiative before the Michigan legislature,” Maluchnik said. “If the legislature approves it, it becomes law, without the governor’s signature. If the legislature doesn’t vote on it, or it goes down, it goes to the next statewide ballot, and we’ll let the voters decide.”