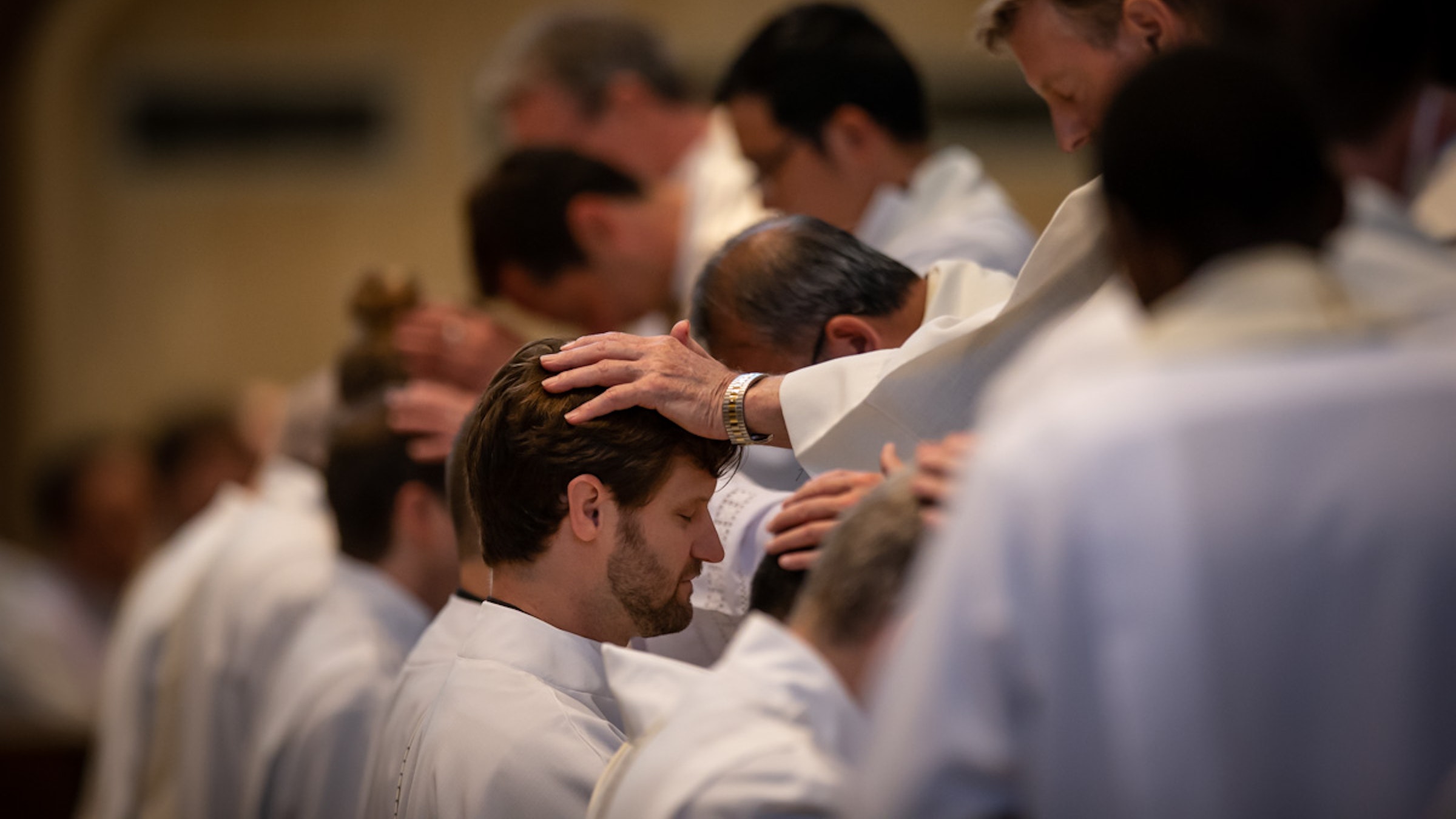 Fr. Robert E. "Bobby" Karle, SJ, receives a blessing from fellow Jesuit Fr. Kevin Embach at his ordination Mass on Saturday, June 12, 2021, at the Church of the Gesu in Milwaukee. Fr. Karle first thought about a religious life as a student at the University of Detroit Jesuit High School. (Photos courtesy Society of Jesus Midwest USA Province)

Anthropology is the study of human societies and cultures and their development, interacting with people in their environment – learning about people by observing and living with them.

Fr. Karle has done that throughout his formation, in areas ranging from remote villages in Belize to the L’Arche Community and the Pine Ridge Reservation in South Dakota.

All of his experiences have been part of an almost lifelong journey towards his priestly ordination on June 12 at Gesu Church in Milwaukee, when he became one of eight men ordained priests in the Midwest USA Province of the Society of Jesus.

Fr. Karle, a Grosse Pointe native who split his time growing up between St. Paul on the Lake in Grosse Pointe Farms and St. Philomena in Detroit, attended Grosse Pointe Academy before going to the University of Detroit Jesuit High School, where he first discerned religious life.

“In high school, I thought about it a little bit, meeting some of the Jesuits at school,” Fr. Karle told Detroit Catholic. “I was really inspired, attracted to their way of life and way of being in the world.”

While Fr. Karle first thought about the priesthood in high school, it was his time as a student at DePaul University in Chicago and later volunteering as a Jesuit Volunteer Corps in Belize, that really advanced his discernment.

“I really enjoyed facilitating retreats in the villages,” Fr. Karle said. “Along with Jesuits and local lay leaders, I developed and ran day retreats for the teachers and students throughout the 30 different Catholic schools in the southern district of Belize. I rode on a motorcycle out to the villages with a guitar on my back and was fortunate to spend time with many families from diverse cultural contexts.”

Fr. Karle spent his time in Belize learning from others, trying to understand their culture, and building himself up spiritually. He joined the Jesuits in 2010 and during his first two years as a novice he made a 30-day silent retreat, lived in a L’Arche Community, made a 30-day pilgrimage with just $35 and spent five months on the Pine Ridge Lakota Reservation in South Dakota. He professed vows of poverty, chastity and obedience in August 2012.

He went on to study Philosophy at Fordham University in New York City before going to Brebeuf Jesuit Preparatory School in Indianapolis to teach religious studies. Fr. Karle then went on to earn a Master of Divinity at the Jesuit School of Theology of Santa Clara in Berkeley, Calif., serving as a deacon at St. Ignatius Parish in San Francisco.

Fr. Karle credits being in such contemplative environments as key to his discernment and formation, bolstered by his devoted grandparents back in Grosse Pointe.

“I was blessed to grow up with both sides of my grandparents and a great-grandmother in Grosse Pointe who were all daily Mass-goers, so they were an early inspiration in my life,” Fr. Karle said. “Then the Jesuits at U of D Jesuit High School were key. I did a Father-Son retreat at Colombiere [Retreat Center in Clarkston], and I read Venerable Fulton Sheen’s “Life of Christ” book. I remember that retreat and book being a real inspiration for me early on, along with traveling, being in Belize, Mexico, South Dakota, and coming across simple, faithful people who inspired me as I discerned how I could make this [world] a better place.”

Along his discernment journey, Fr. Karle started practicing yoga, first after school at U of D, and then teaching yoga at Fordham and Brebeuf. While in regency at Fordham, Fr. Karle started the Ignatian Yoga organization, incorporating Ignatian spirituality into a practice that has its roots in ancient India.

Fr. Karle cites “Nostra aetate,” a document from the Second Vatican Council which encourages Catholics to find wisdom from other traditions as long as they don’t contradict with the Church’s teaching, as a source for using a tradition from ancient India and sanctifying it by drawing it closer to Christ.

“I first practiced yoga after school out of curiosity, and it really resonated with me,” said Fr. Karle, who played hockey growing up and always loved physical exercise. “It was a very prayerful experience to gather with others to contemplatively move and breathe and just relax. It took me out of the head and into the deeper spaces of consciousness, into the body and that really helped me discern my vocation and deepen my relationship with Jesus.”

Fr. Karle’s first assignment is at St. Mary Student Parish in Ann Arbor, a diverse community that serves University of Michigan students and full-time Ann Arbor residents, and has a sizable Hispanic community.

Throughout his formation and now beginning his priesthood, Fr. Karle sees his vocation as building a connection with others: bringing Jesus in the sacraments by meeting people where they are, understanding where they are coming from, and how Jesus can sanctify where they are going.

“To be ordained a Roman Catholic priest in the 21st century is to be a bridge builder, a connector who enters into peoples’ realities in the here and now with the current struggles and challenges we face in this country and our world,” Fr. Karle said. “It is about being a bridge between the world today and in our long-standing Catholic tradition. I believe our Catholic tradition and faith are just as needed and relevant today than ever. To be a Catholic priest is to help God incarnate in the here and now and to be an instrument of Christ’s presence in the world.”