Have you heard of the green scapular? Parishioners say it’s changing lives 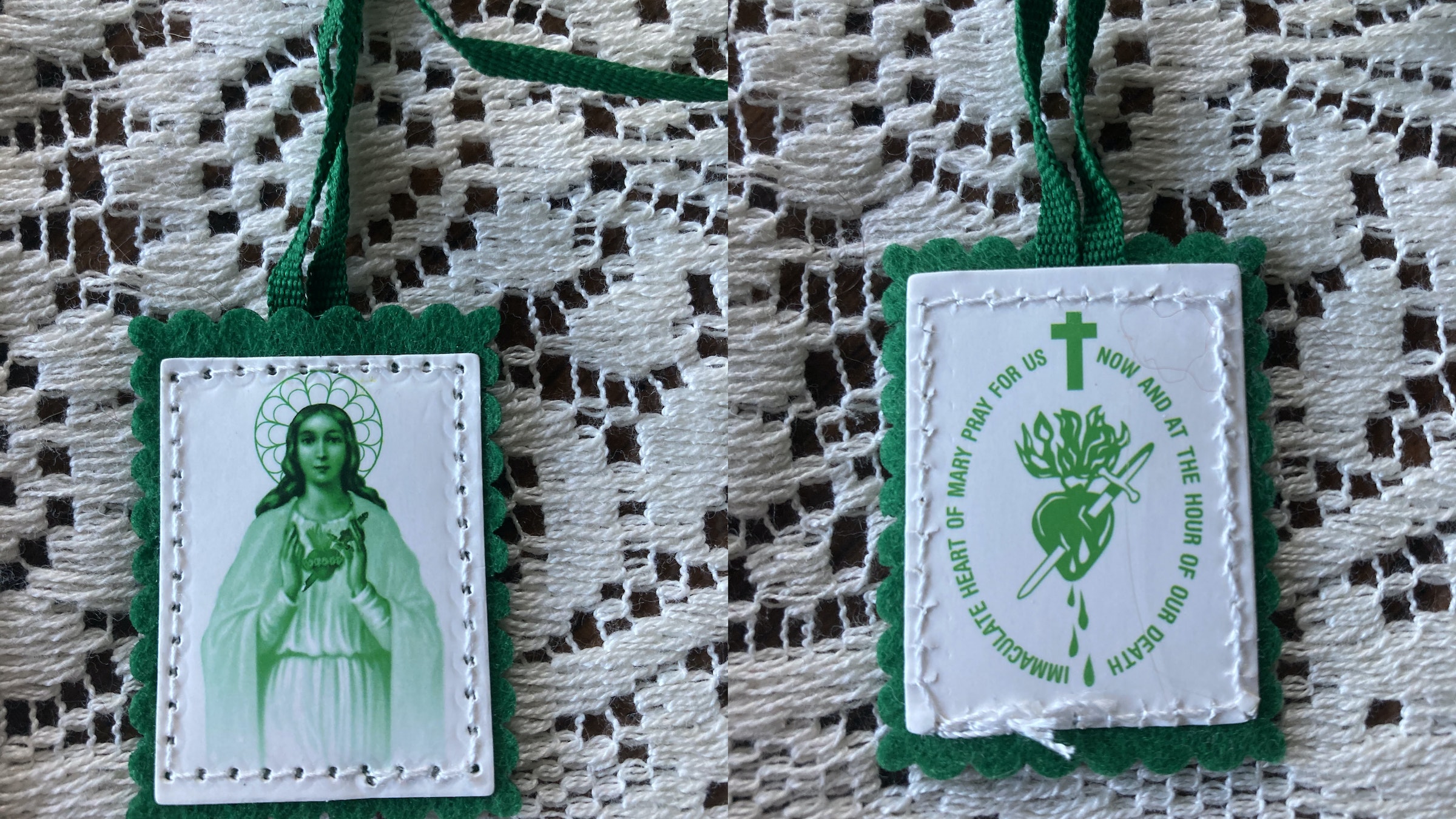 While some Catholics are familiar with the Brown Scapular associated with Our Lady of Mt. Carmel, a lesser-known devotion, the Green Scapular of the Immaculate Heart of Mary, traces its roots to the 1840s, when the Blessed Mother appeared to a French nun. Local Catholics say the scapular has brought peace, healing and conversion in their lives. (Courtesy of Margaret Kaminski)

Lesser-known devotion and other sacramentals root Catholics in faith, offer powerful source of healing for those in need, devotees say

DETROIT — Margaret Kaminski never leaves the house without her keys, purse, and a green scapular or two. Given the many answered prayers she’s witnessed by way of the scapular, she likes to be prepared to offer them to people when the Holy Spirit moves her to do so.

Kaminski has given out more than 300 Green Scapulars of the Immaculate Heart of Mary to friends, family and strangers. She is a member of the family of parishes in northern Lapeer County and attends St. Mary Burnside.

The green scapular and other sacramentals have been part of Kaminski’s prayer life for decades. In 1997, she learned about the Brown Scapular of Our Lady of Mount Carmel when her son attended a retreat through the religious education program at their former parish, St. Martha in Dearborn, which closed in 2013. Students were given a brown scapular and the Rite of Blessings and Enrollment.

Two years later, a friend gave Kaminski a green scapular, explaining the origins of the powerful scapular from the Immaculate Heart of Mary for the healing of body, mind and spirit. Unlike other scapulars, the green scapular need only be blessed by a priest and a daily prayer recited. It can be worn or carried in a pocket or purse, or kept in one’s car or at home.

When praying for someone’s conversion or for a person who might not be willing to pray the devotion, the prayer can be said on his or her behalf, Kaminski said.

Shortly after Kaminski was introduced to the green scapular, a family member who had been having difficulties conceiving a child was diagnosed with cancer. When the family member was at the hospital to have a mass removed from her abdomen, and possibly a hysterectomy, Kaminski and her sister each held a green scapular and prayed for healing.

Six hours later, Kaminski learned that the family member’s tumor was non-cancerous, no organs had to be removed, and that she was six weeks pregnant.

“That was the beginning of my devotion to the green scapular,” Kaminiski said. “The power that we put into the faith of Mary’s intercession is the depth of the graces we receive from the scapular.”

History of the Green Scapular

The Blessed Virgin Mary appeared to Sr. Justine Bisqueyburu, DC, in France in the early 1840s holding the scapular in one hand and her Immaculate Heart in the other. The scapular was made of a single piece of green cloth. One side showed in image of Mary in a long white gown; the reverse displayed an image of her Immaculate Heart pierced with a sword. An inscription surrounded the heart that read, “Immaculate Heart of Mary, pray for us, now and at the hour of our death.” This prayer must be said at least once daily when using a green scapular.

At the same time, an interior voice told Sr. Justine to distribute the scapular, and that those who prayed with it would obtain great favors from the Immaculate Heart of Mary through her son, Jesus, for the health of mind, heart, body and soul.

The green scapular was approved for use by Pope Pius IX in 1863.

A scapular is one of many sacramentals used by Catholics worldwide. Rosaries, holy oils, relics, holy water, blessed palms, holy images and medals are among the most common. Scapulars and other sacramentals should not be treated as good-luck charms, but rather, as a means for prayer and treated with reverence and complete faith.

The Catechism of the Catholic Church teaches that sacramentals “are sacred signs which bear a resemblance to the sacraments. They signify effects, particularly of a spiritual nature, which are obtained through the intercession of the Church” (CCC 1667).

While the sacraments mediate the grace of the Holy Spirit, sacramentals prepare people to receive His grace and dispose them to cooperate with it.

Bob Wilson, director of St. Paul Street Evangelization in Warren, emphasizes the importance of having a religious object blessed by a priest, after which it becomes a sacramental.

“It goes from a religious object to a sacramental, which is a conduit of actual grace. God’s grace is God’s help, which directs us to God’s life in the sacraments,” Wilson said. “The idea of the sacramentals is to push us toward conversion and to God’s life, which is what we need in our souls to be saved.”

St. Paul Street Evangelization uses sacramentals as a way to open conversation with people at festivals, sports venues and other public spaces. Street evangelizers stand in front of a display table and ask passersby if they’d like a free miraculous medal, rosary, scapular or holy card.

“We start with an act of love — this free gift — and then we start talking to them,” Wilson said. “We’re not out there simply to give out these items, but to evangelize and to encourage them to take the next step.”

People who take the time to stop often begin to open up about their own lives as they learn about the medal or rosary in their hands.

“Sacramentals are powerful because you can experience them with your senses. That’s what I love about the sacraments. I can know I’m experiencing God’s life when I’m feeling that water being poured on my head, when I taste the Eucharist, when I hear I’ve been absolved of my sins,” Wilson said. “God created us with these physical senses. I think He wants to put those senses to work so that I can know I’m receiving God’s grace, either sanctifying or actual.”

Kaminski buys green scapulars in bulk and has them blessed by a priest before she gives them away. She remembers feeling nervous the first time she offered one to a stranger when attending a speaking event at a church.

That morning, Kaminski felt called to bring two green scapulars with her. When introducing herself to a woman sitting next to her, the woman asked Kaminski to pray for her husband who was having serious intestinal issues. Kaminski gave her a green scapular and told her to say the prayer each day with faith and confidence. The woman sitting behind them asked for a scapular as well.

A year later, Kaminski called the woman who asked for prayers for her husband and learned that on that very day, he was coming home from the hospital and would be returning to work.

“God wants us to know Him. He wants us to know his mother,” Kaminski said. “This simple, humble little green scapular and the promises associated with it have brought favors and miracles in my life. I’ve been so privileged to witness the miracles brought by Mary’s intercession.”

Of the 300 scapulars she has given away, Kaminski knows of more than 200 favors including healing, peace at the hour of death, and conversion to Christ.

She also shared the green scapular with the women in her prayer group, Sisters in Christ. Renea Bader, a cradle Catholic and one of the founding members of the group, learned about sacramentals as an adult. She believes strongly in the power of the Divine Mercy, after her husband passed away two years ago and experienced peace and joy in his final moments as the family prayed the Divine Mercy chaplet at his bedside.

“People need to realize what’s out there and the true beauty of how much the Lord loves us and how much He is there for us,” Bader said.

One year for Easter, Bader gave her family members care packages with sacramentals such as holy water, scapulars, and blessed candles and salts for their homes. Some of them were no longer Catholic, but she felt the need to step out of her comfort zone and share her love of the faith with them. One of her brothers has since returned to the Catholic Church.

“I realized if I’m going to fight for the Lord, I had to get comfortable being uncomfortable,” Bader said. “This life down here is nothing. I want everybody to have to eternal life.”

Kaminski says anyone can learn about sacramentals and share them with others.

“I don’t have any supernatural ability, it’s just a matter of faith and a matter of trust,” Kaminski said. “It’s a willingness to honor our Blessed Mother and cooperate with God’s grace. I pray, ‘Show me where the need is and then I leave it all up to you.’”

Society of the Green Scapular

To learn about the Society of the Green Scapular, visit greenscapular.com. Green scapulars and other sacramentals may be purchased at A. Mateja Church Supply in Garden City, G.A. Fuchs in Troy, or from St. Paul Street Evangelization’s online store. Once acquired, green scapulars should be taken to a priest for a blessing.