‘He is risen:’ Archbishop offers Easter blessing to Detroit from cathedral's steps 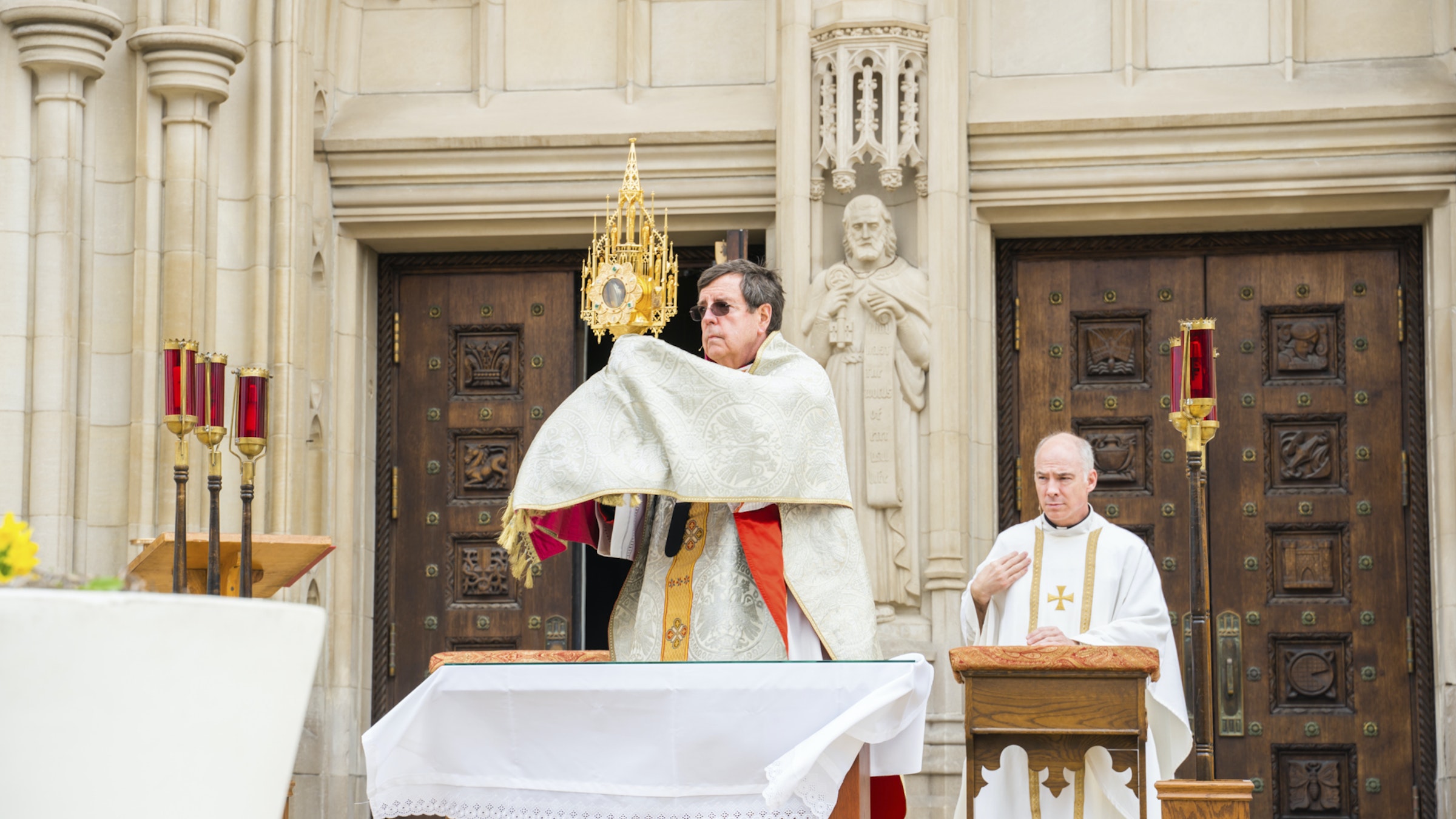 On Easter Sunday, April 12, 2020, Archbishop Allen H. Vigneron stood on the steps of the Cathedral of the Blessed Sacrament in Detroit, raising high the monstrance with the Body of Christ, and invoked a blessing on the people of the Archdiocese of Detroit. (Photos by Valaurian Waller | Detroit Catholic)

Archbishop Vigneron gives Easter message of hope and new life, reminding faithful that ‘nothing is more powerful than life in Christ’

DETROIT — Two weeks ago, Pope Francis stood on the rain-soaked steps of St. Peter’s Basilica in Rome and held up a monstrance with the Most Blessed Sacrament, offering the world an extraordinary blessing “urbi et orbi.” Since then, his prayer has continued to bless the universal Church, uniting dioceses and parishes in a unique time of trial.

On Easter Sunday, Detroit Archbishop Allen H. Vigneron emulated the Holy Father — who again offered his traditional “urbi et orbi” Easter blessing — as he stood on the steps of the Cathedral of the Most Blessed Sacrament, raising high the monstrance with the Body of Christ, and invoked a blessing on the people of the Archdiocese of Detroit.

In this powerful act of unity, the archbishop offered up Detroit and its surrounding areas — currently the third-worst hotspot in the country for the spread of COVID-19 — to the risen Christ.

As has become the norm in the age of COVID-19, the archbishop celebrated both the Easter Vigil and Easter Sunday Masses in an empty cathedral, with the exception of a few helping hands. Both Masses were livestreamed to the faithful, with more than 37,000 tuning in on Easter Sunday, plus audiences on WJR 760-AM and Fox 2 Detroit, each of whom broadcast the Mass live.

Notably, this year’s Easter Vigil did not include the sacraments of initiation for candidates and catechumens, who will enter the Church at a later date, as Michigan remains under strict stay-at-home orders to stifle the virus’ spread.

In both of his homilies, Archbishop Vigneron offered a message of hope and new life. Following the blessing over the city, he led the faithful in a Divine Mercy Chaplet, one of the conditions to receive an Easter indulgence Pope Francis has offered to the faithful during the pandemic.

On Easter Sunday, Archbishop Vigneron referenced Fr. Gabriel Richard, the famed 19th century priest whose response to the destructive Detroit fire of 1805 resonates as the city’s motto: “We hope for better things; it will rise from the ashes.”

Like Fr. Richard, the archbishop led the local Church in such hope, praying “that the the Lord of life and death will deliver us from all sickness and death and above all from despair. (We pray that) he makes us alive with a life that is beyond this age.”

The archbishop said his mission as a pastor is to be like the angel in the Gospel, the messenger who told of Christ’s return.

“Do not be afraid. There is nothing to fear,” the archbishop said. “My mission is simple — it’s to echo the angel who speaks for Jesus. To say once again that Jesus the crucified was no longer there in the tomb. He was raised up, just as he said.”

Archbishop Vigneron emphasized that Christ’s resurrection isn’t a fable or a story made up by apostles in order to console themselves in their sorrow. Rather, Christ’s rising truly happened, and it marked the beginning of a new life for the world.

“This risen life of Jesus is a new way to exist,” he said. “This is making the world a new Eden, better than the paradise that we lost — a place where we can walk with God in harmony all the days of our life.”

Archbishop Vigneron encouraged the faithful to play the role of messenger to those around them and to share the life of Christ and his victory over death.

“Nothing is more powerful than life in Christ,” he said. “Not even in this pandemic and all the aftermath that we anticipate. As much suffering as it is bringing to us, we will conquer in Christ because Christ conquers.”

The archbishop said Christ’s rising from the dead proves that every evil can be turned to grace, and that all are called to share this good news with others.

“God didn’t need to start over for this new creation, but he took the evil that had been done to his creation and transformed it into life and love,” Archbishop Vigneron said. “This is the omnipotence of the saving God, who can transform everything through his glory if we let him.”

Recordings of both the Easter Vigil and Easter Sunday Masses from the cathedral can be found on the Archdiocese of Detroit’s website.