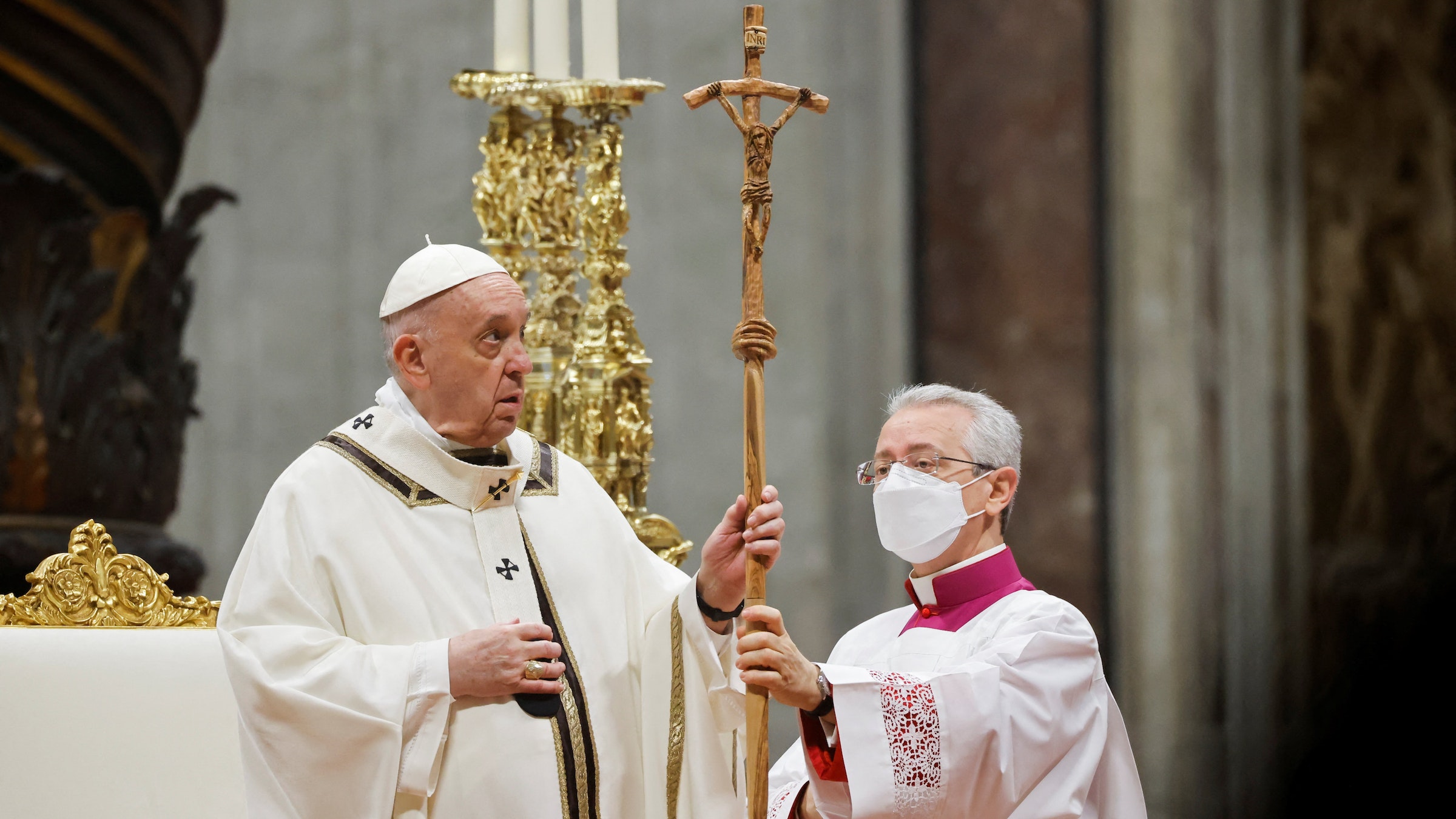 Pope Francis is assisted by Msgr. Diego Giovanni Ravelli, master of papal liturgical ceremonies, as he celebrates Mass for the feast of Epiphany in St. Peter's Basilica at the Vatican Jan. 6, 2022. (CNS photo/Yara Nardi, Reuters)

VATICAN CITY (CNS) -- A Catholic university should help young people achieve their dreams and goals on the basis of the truth, beauty and the good, Pope Francis said in a written message.

Marking the 625th anniversary of a faculty of theology founded by St. Jadwiga, Queen of Poland, and supported by St. John Paul II, Pope Francis sent a written message praising the long history and mission of the faculty in Krakow, which is today part of the Pontifical University of John Paul II.

"Today's times require all of us not to forget tradition, but at the same time to look with hope to the future and to create the future," he said in the message, sent to Archbishop Marek Jedraszewski of Krakow, the university's grand chancellor.

With the motto, "Go and make disciples" (Mt 28:19), the university's mission entails "scholarly reflection on the content of revelation, using classical and contemporary research methods," the pope wrote.

"St. John Paul II emphasized the need for such a 'ministry of thought' through which the worlds of the university join in the church's mission of spreading the message of Christ" across the globe, he wrote.

Pope Francis urged the faculty to be faithful to its centuries of tradition and to "read the signs of the times and courageously take up new challenges in order to effectively bring the truth of the Gospel" to the people of today.

"Young people have their own dreams and goals, and a Catholic university should help them realize them on the basis of the truth, goodness and beauty that have their source in God," the pope wrote.

"Your ministry of thought and truth-seeking is needed by the church in Poland and in the world today," he said. "Carry it out with a sense of responsibility to be faithful to your mission: go and make disciples!"

The faculty of theology was founded in 1397 at the Krakow Academy, which became Jagiellonian University -- Poland's oldest university, where St. John Paul studied and taught. Communist authorities removed the faculty of theology from the Jagiellonian University in 1954, but it remained under the supervision of the Vatican, receiving the title of "pontifical" in 1974.

St. John Paul established it as the Pontifical Academy of Theology with the "motu proprio," "Beata Hedvigis," in 1981. Pope Benedict XVI decided it should be named the Pontifical University of John Paul II in 2009.