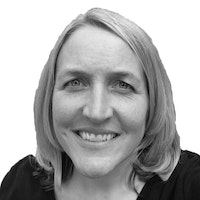 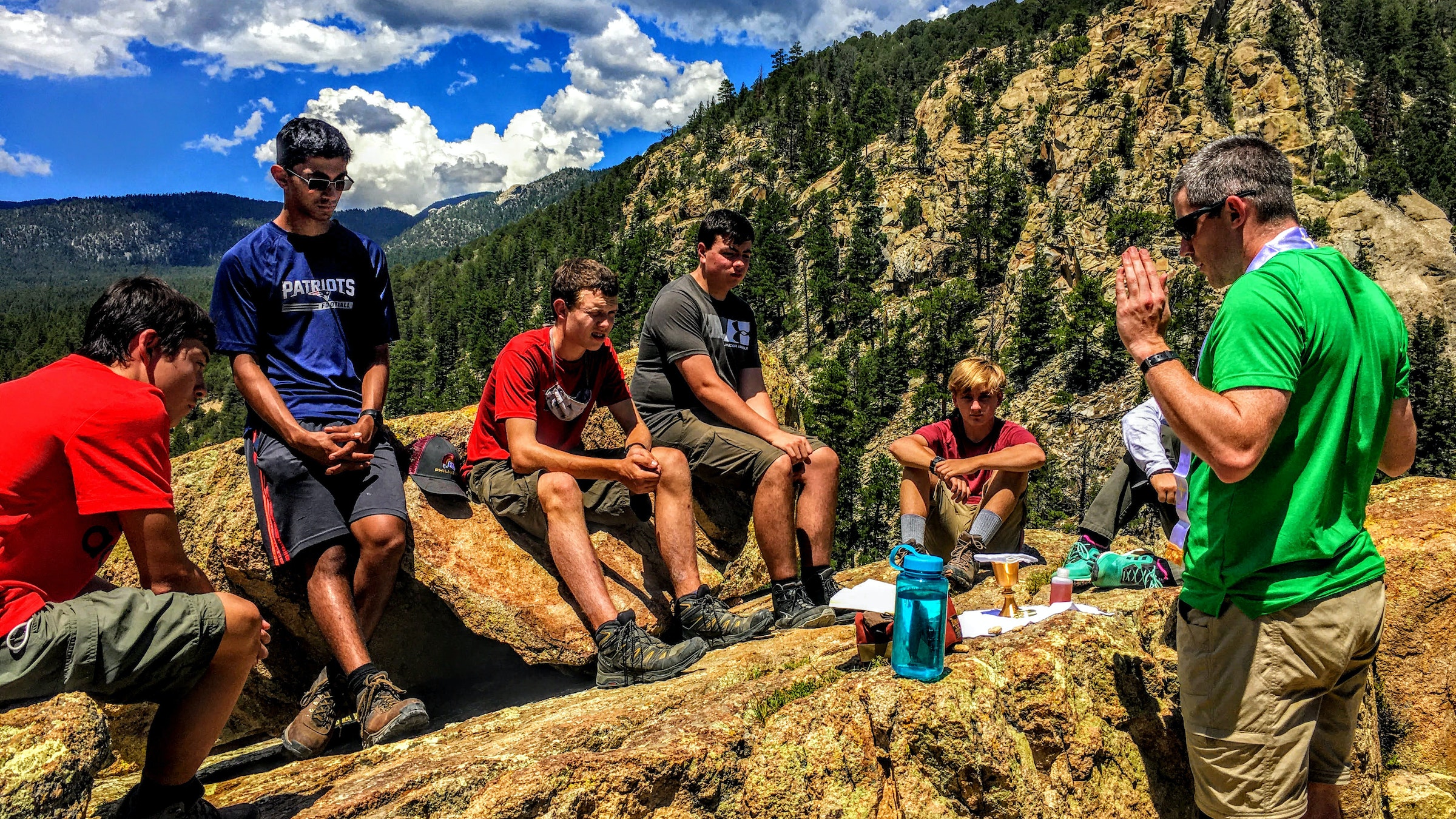 Fr. John Horan from the Diocese of Joliet, Ill., celebrates Mass in New Mexico with St. George Trek participants in July. The annual backcountry vocational experience, which began in 1982 and is held every other year, is open to Catholic Scouts ages 15-18. (Courtesy photos)

DETROIT — Most 17-year-old boys wouldn’t be thrilled about waking up at 3 a.m. during their summer break.

Joshua Progar, on the other hand, couldn’t wait to emerge from his tent long before sunrise last month to hike the Tooth of Time, a stony peak on Philmont Scout Ranch in New Mexico. Once his group arrived at the top, they celebrated Mass as they took in the vistas. He cites the experience as the highlight of a two-week adventure.

Progar was selected to represent the Archdiocese of Detroit in the St. George Trek, a backcountry experience for vocational discernment organized by the National Catholic Committee on Scouting (NCCS), which is an advisory to the Boy Scouts of America (BSA). Progar is a member of BSA Troop 3 in Ann Arbor and a parishioner at Mother of Divine Mercy Parish in Detroit. 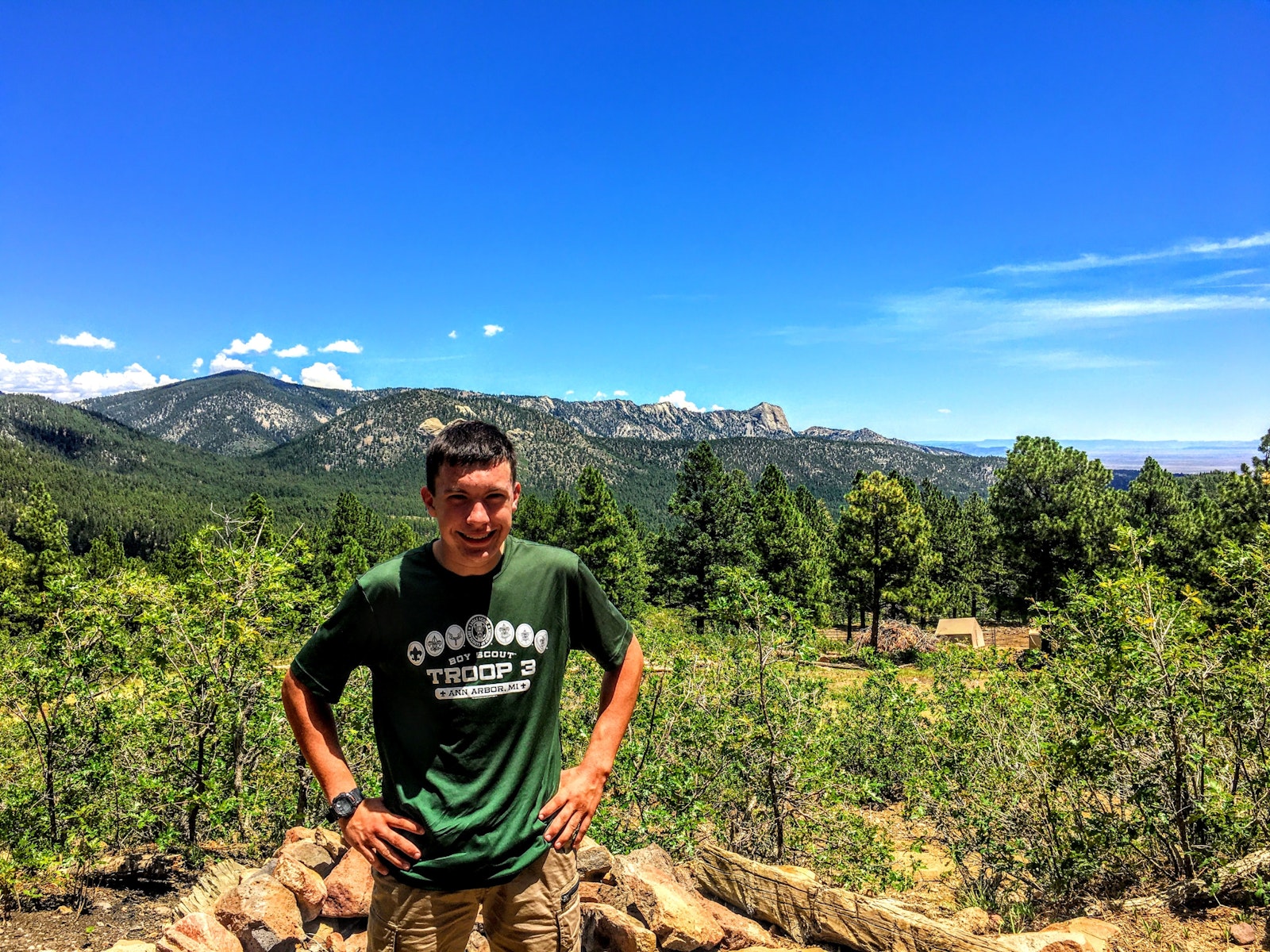 Mother of Divine Mercy parishioner Joshua Progar, 17, was the delegate for the Archdiocese of Detroit on a backcountry adventure promoting vocations. The trek is sponsored by the National Catholic Committee on Scouting.

Catholic Scouts ages 15-18 may apply to be part of the St. George Trek, which began in 1982 and is held every other year. After wildfires in 2018 and then the COVID-19 pandemic, the trek was able to hit the trails this year for the first time since 2017.

“The primary goal of the St. George Trek is to provide the participants with an opportunity to consider where God may be calling them,” said Fr. Mike Santangelo, who is the Trek director, an Eagle Scout since 1982, and a priest with the Diocese of Trenton, N.J. “The ability to hike in the backcountry of Philmont with priests, seminarians and vowed religious allows the participants to be free of the distractions of the world, to be with like-minded young people, and to be guided by those who have already responded to God's call.”

Thirty-four Scouts from around the country participated in the 2022 trek in July. The group was divided into three crews that traveled together into the backcountry with a priest and a seminarian, hiking four to 10 miles per day and setting up camp nightly. Progar was elected to be the chaplain’s aide for his crew of 12. He coordinated the daily rosary and prepared for Masses by arranging lectors and other details.

“I enjoyed being in charge of worship because I wanted to help all of us grow in prayer,” Progar said. 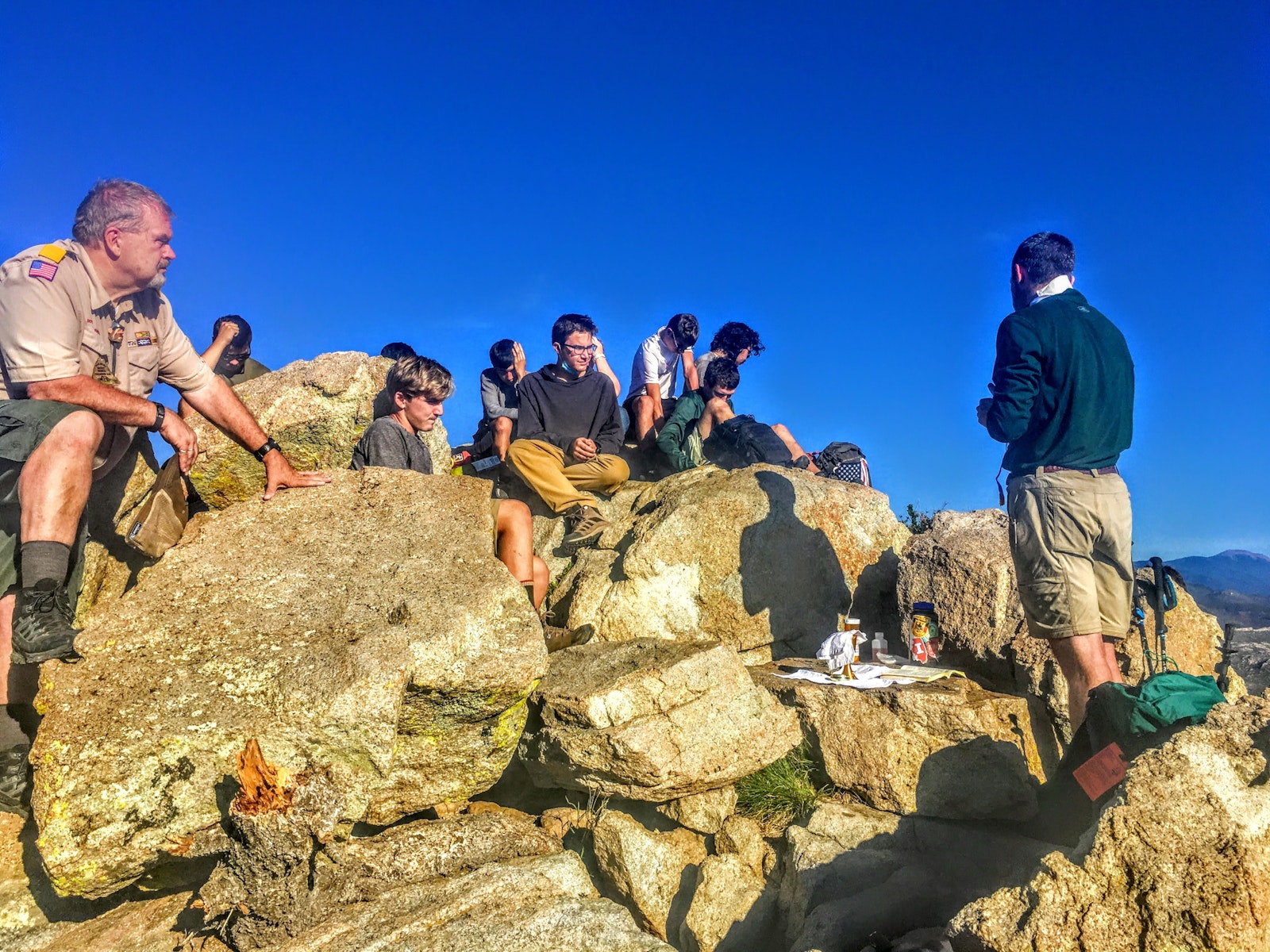 After waking at 3 a.m. to hike to the peak of Tooth of Time at Philmont Scout Ranch in New Mexico, participants in the St. George Trek celebrate Mass together.

Steve Terhaar served as Scoutmaster for Troop 3 during Progar’s application process, which took place in 2020, though the trek was then delayed. Terhaar wasn’t aware of the St. George Trek until Progar brought the information to him and expressed interest in applying.

“I think the trek provides a wonderful opportunity beyond our troop for Scouts to further their leadership skills and to further their faith, too,” Terhaar said. “What a great thing to go out into nature and share time with those who have like-minded desires for their life and to hear about their journeys.”

Troop 3 has received the Pope Paul VI National Catholic Unit Excellence Award, which is issued by the NCCS, every year since its founding in 2010. The troop holds a vocations outing each spring to visit a seminary or religious community and prays a rosary around the campfire on every campout. The troop also participates in the religious emblem program offered by the NCCS, in which Scouts dive deeper into the sacraments as a means of spiritual growth, and explore vocations and church ministries as calls from God.

Progar was the only Michigan delegate on this year's trek. Midge Savage, who led the selection committee as the Archdiocese of Detroit Catholic Committee Chair, hopes more Michigan Scouts will attend in the future.

“Part of the commitment on Joshua’s part is to come back and share his experience and help with the promotion of the program,” Savage said. “He is a good representative to show that an active Scout life can be part of your faith life along with other activities.” 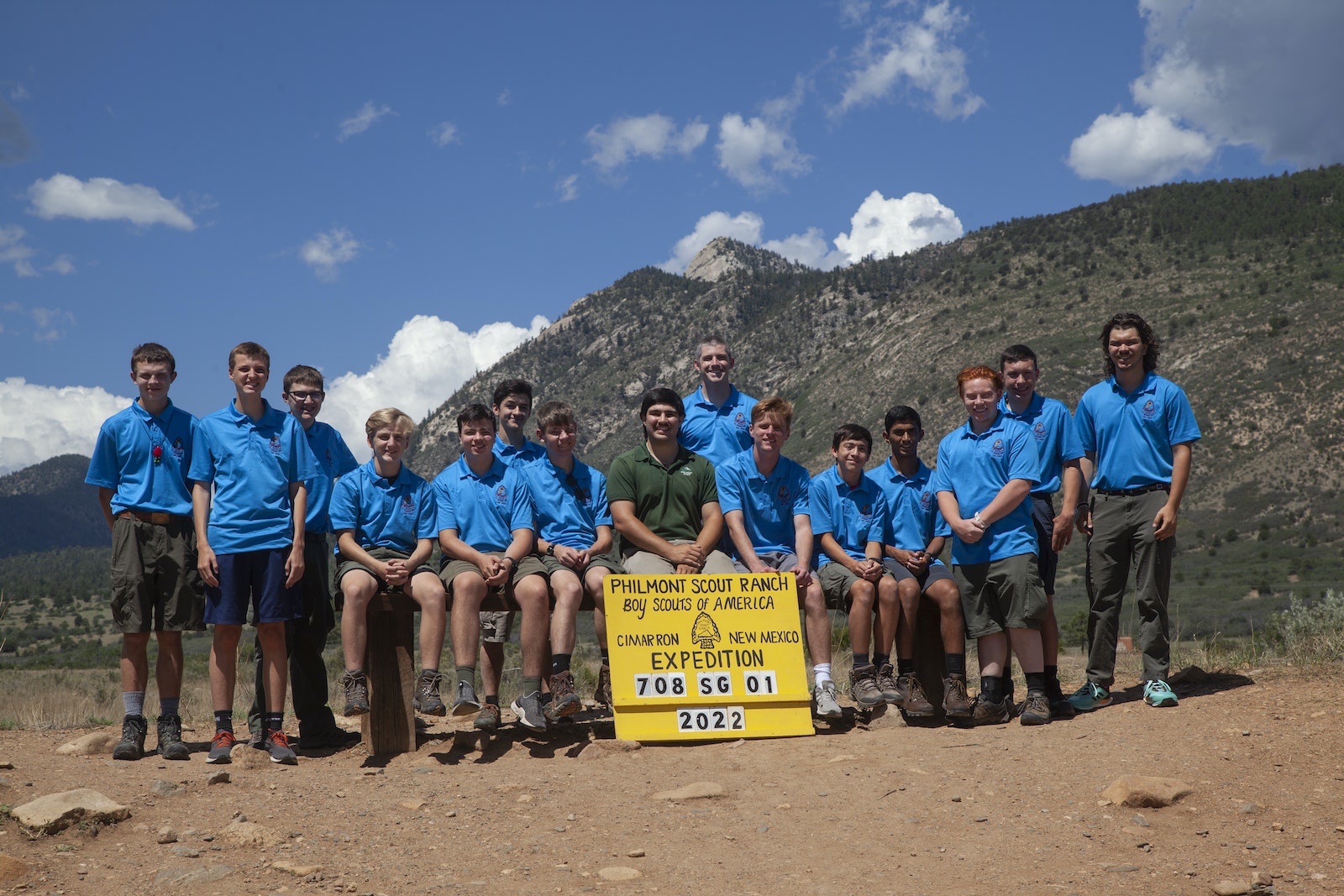 Joshua Progar, second from right, poses for a photo with his crew on the St. George Trek in July. Progar attends Mother of Divine Mercy Parish in Detroit.

Progar plays trombone for the Michigan Philharmonic Youth Orchestra and plays football for the Washtenaw Saints football team. He’s active in his parish as an altar server and volunteers for the parish’s annual Pierogi Festival and Lenten fish fries at Sweetest Heart of Mary Church. This summer, Progar also spent a week on Mackinac Island as a member of the Boy Scouts' Mackinac Island Honor Troop 168.

The St. George Trek coincides with the AOD’s Year of Prayer for Priestly Vocations. As stated on the Year of Prayer website, the effort is “a way for us to understand and embrace our need to be united in prayer and work towards a culture that fosters and celebrates vocations to the priesthood.”

During the Archdiocese of Detroit's Year of Prayer for Priestly Vocations, vocational experiences like the St. George Trek are key in allowing young people like Progar to listen for God's voice.

“The trek helped me understand more about discernment and brought me to another level of discernment,” Progar said. “I learned that if I feel God might be telling me something he wants for me, I can pray for Him to reveal that path.”

At the end of the trek, Scouts are asked to make a “Covenant Commitment” that includes both a personal spiritual commitment moving forward and a promise to share their experience within their respective dioceses. They also promise to be a peer leader and role model to their fellow Scouts. Progar hopes to travel around the state to tell other troops about the trek and encourage them to apply within their diocese. 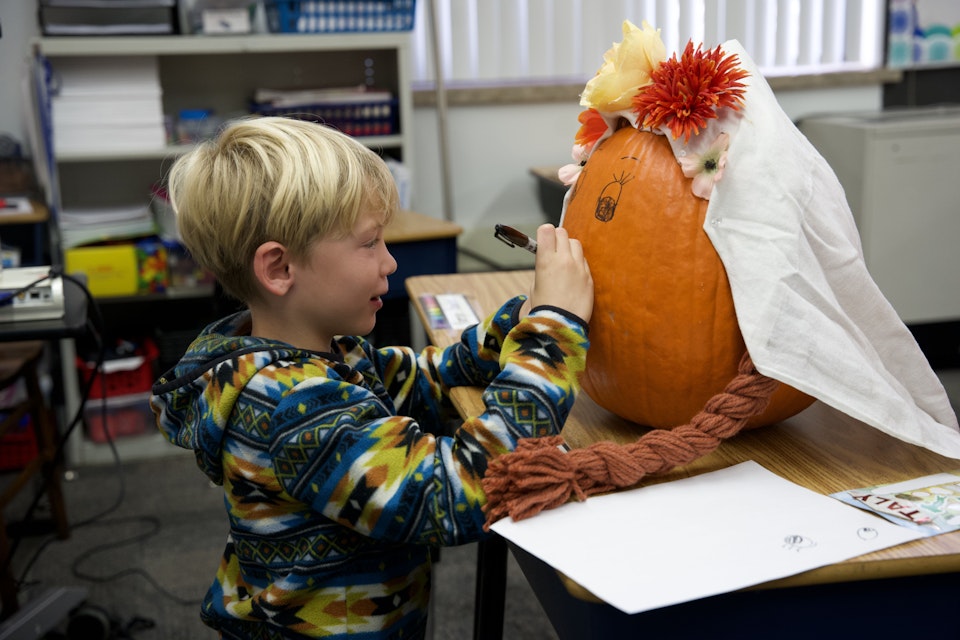 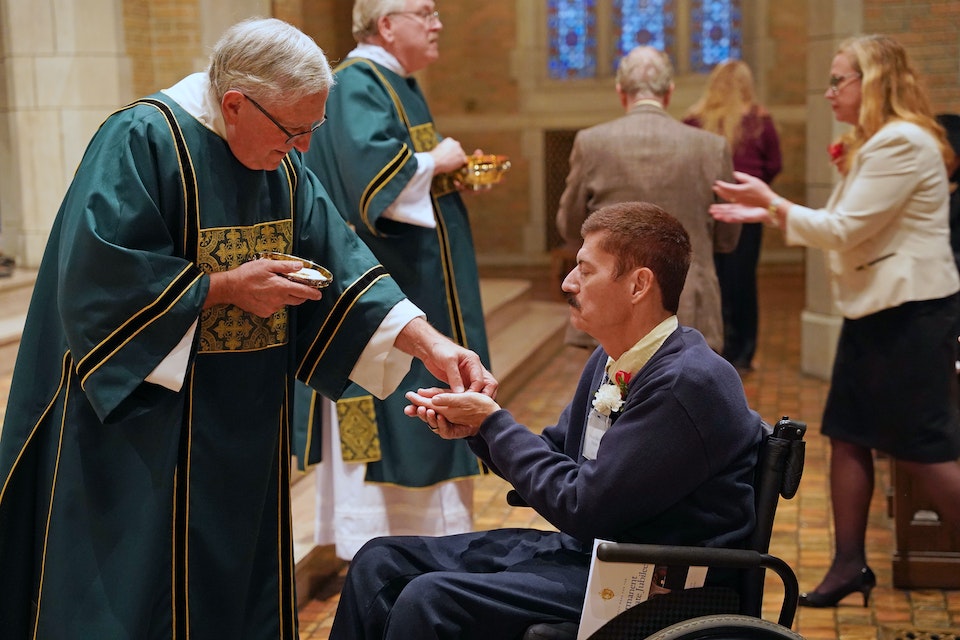