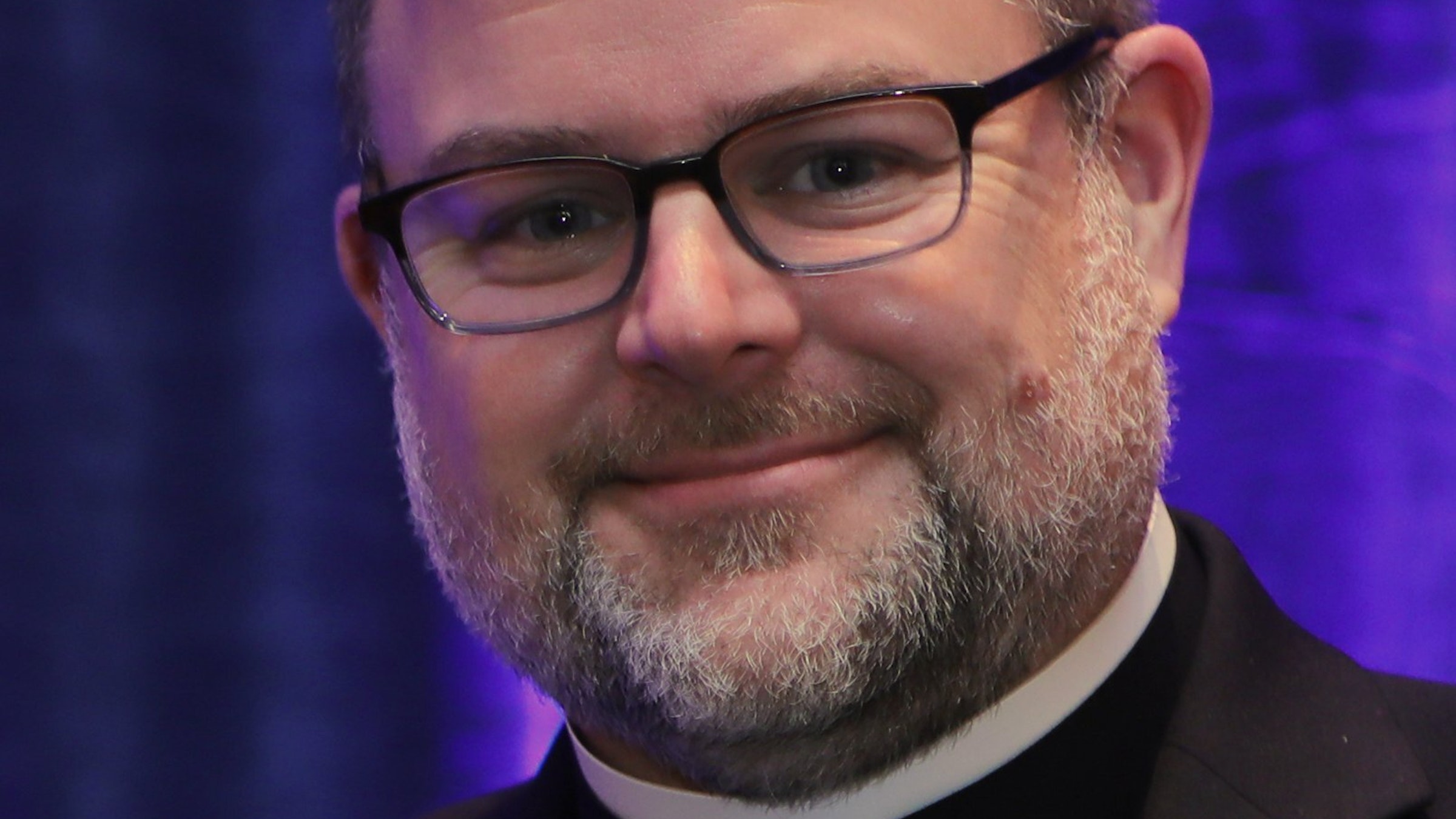 Father Michael J.K. Fuller smiles Nov. 16, 2021, after being elected general secretary of the U.S. Conference of Catholic Bishops during the bishops' fall meeting in Baltimore. Due to the COVID-19 pandemic, it is the first in-person bishops' meeting since 2019. (CNS photo/Bob Roller)

BALTIMORE (CNS) -- Bishops elected Father Michael J.K. Fuller, a priest of the Diocese of Rockford, Illinois, as the general secretary of the U.S. Conference of Catholic Bishops. He will serve a five-year term in the position.

He had been serving as interim general secretary since the July resignation of Msgr. Jeffrey D. Burrill, who stepped down after the USCCB learned of an impending media report accusing him of engaging in improper behavior.

Father Fuller was elected over Father Daniel Hanley, associate director of the USCCB Secretariat of Clergy, Consecrated Life and Vocations, in paper ballot voting Nov. 16, the first of two days of public sessions during the bishops' fall general assembly Nov. 15-18 in Baltimore.

In other voting, Bishop James. F. Checchio of Metuchen, New Jersey, is the new treasurer-elect of the USCCB.

He was voted into the position over Archbishop Paul D. Etienne of Seattle by a vote of 135-106.

The treasurer-elect will serve for one year in that capacity before beginning a three-year term in the office at the conclusion of the bishops' 2022 fall general assembly.

The current USCCB treasurer is Bishop Gregory L. Parkes of St. Petersburg, Florida. His term ends in November 2022. The treasurer also is chairman of the USCCB Committee on Budget and Finance.

Msgr. Burrill had named Father Fuller as associate general secretary following his own election to the chief administrative position at the USCCB in November 2020. Father Fuller previously was the executive director of the USCCB's Secretariat of Doctrine and Canonical Affairs, having served in the position since August 2016.

Prior to joining the USCCB, Father Fuller was on the faculty of the University of St. Mary of the Lake/Mundelein Seminary in Illinois. From 2002 to 2016, he held various positions, including as chairman of the department of spiritual theology and the department of Christian life.

From 2002 to 2016, he served as an instructor for the diaconate formation programs in the Diocese of Rockford and the Archdiocese of Chicago. He also was editor of the Chicago Studies Theological Journal.

Father Fuller also taught at the Institute for Priestly Formation at Jesuit-run Creighton University in Omaha, Nebraska, 2004-2008; and was an instructor in health care ethics at St. Anthony School of Nursing in Rockford, 1998-2000. He served as associate pastor of St. Bridget Parish in Loves Park, Illinois, from 1997 to 2000.

The bishops also voted for chairmen-elect for five standing committees.

The results of those elections are:

The chairmen-elect will serve for one year in that capacity before beginning a three-year term as the chairman of their respective committees at the conclusion of the fall general assembly in 2022.

Three bishops were elected to the board of Catholic Relief Services, the bishops' overseas relief and development agency: Archbishop Timothy P. Broglio of the U.S. Archdiocese for the Military Services; Bishop Donald J. Hying of Madison, Wisconsin; and Bishop Oscar A. Solis of Salt Lake City, who is completing his first term and is eligible for a second term.

Last November, the bishops voted for chairmen-elect for seven standing committees. They have served for one year in that capacity, and at the conclusion of this fall's general assembly, they will begin a three-year term as the chairman of their respective committees: