In addressing priest shortage, prayer ‘is not an afterthought,’ archbishop says

DETROIT — A day before inaugurating an archdiocese-wide Year of Prayer for Priestly Vocations, Archbishop Allen H. Vigneron issued a new reflection June 3 calling on Catholics to pray fervently for more priests, expounding upon the essential nature of the priesthood, and encouraging both clergy and laity to work toward a culture of vocations.

“This year, we are focused on asking (God) for more priests,” Archbishop Vigneron wrote in a new pastoral note, his ninth in a series of teaching documents, titled “Forming Men of the Hearts: A Pastoral Note on the Year of Prayer for Priestly Vocations.”

“While it is good to pray for all vocations, a most immediate need is an increase of priestly vocations here in the Archdiocese of Detroit,” the archbishop said. “The priesthood is essential for the sacramental life of the Church; without the priest, we would be without the Eucharist, the Mass, and would have no one to hear our confessions to reconcile us sinners with our Father.”

Archbishop Vigneron announced the Year of Prayer for Priestly Vocations on April 14, when, during the Chrism Mass, he informed the faithful that there would be no priests ordained for the Archdiocese of Detroit this year — a likely first in the archdiocese’s 85-year history.

Ordinations in the archdiocese typically take place the Saturday before Pentecost, June 4 this year.

Instead, Archbishop Vigneron will preside over a special holy hour at 10 a.m. tomorrow to inaugurate the year of prayer at the Cathedral of the Most Blessed Sacrament. 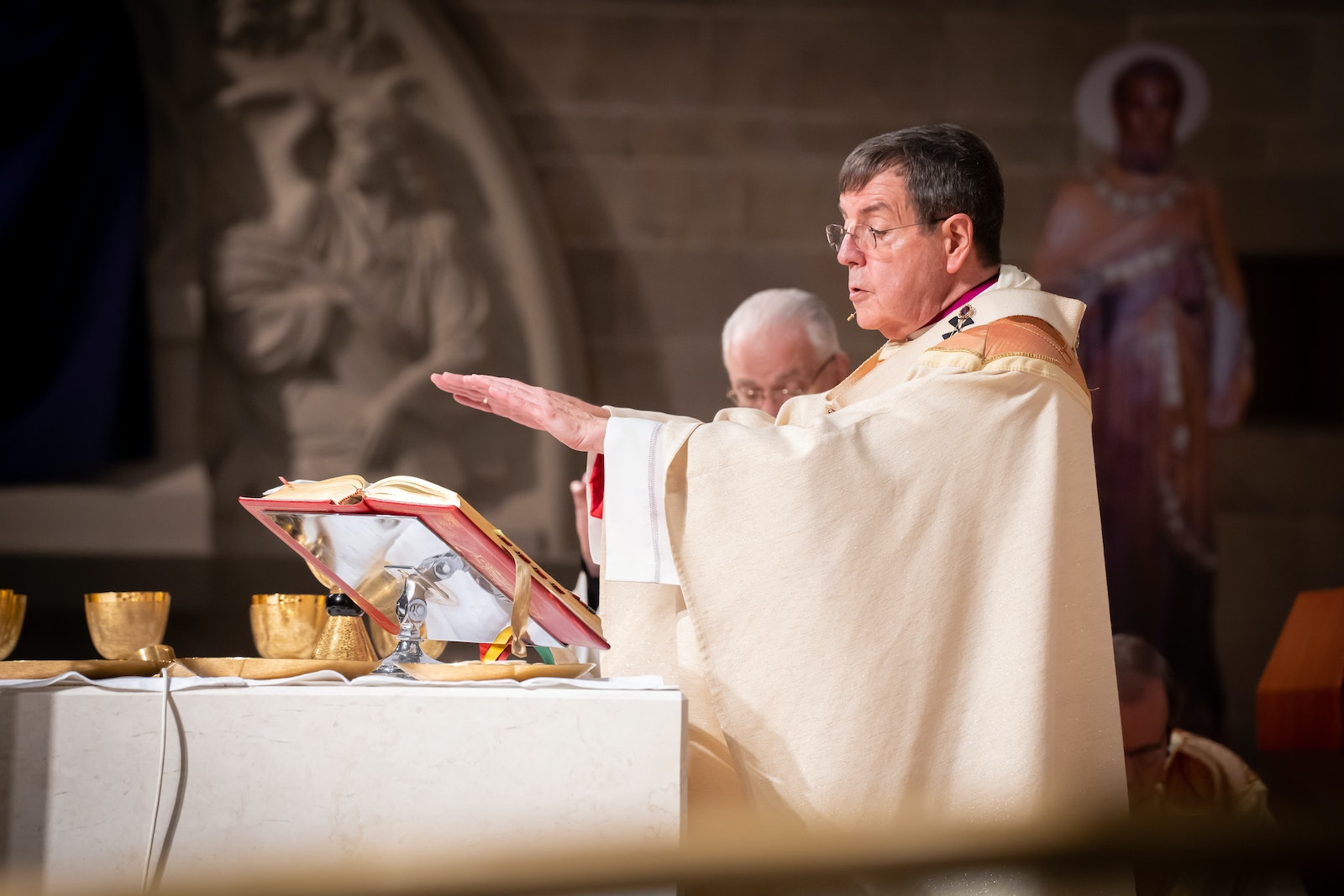 Archbishop Allen H. Vigneron consecrates the Eucharist during the Chrism Mass on Holy Thursday, April 14, at the Cathedral of the Most Blessed Sacrament. Tomorrow, the archbishop will preside over a special Holy Hour to pray for priestly vocations at the cathedral. (Valaurian Waller | Detroit Catholic)

“In this Year of Prayer for Priestly Vocations, Our Lord Jesus Christ is calling us to pray, invite, and encourage men to the ministerial priesthood for service in the Archdiocese of Detroit,” Archbishop Vigneron said. “Christ is asking us to accompany these men in forming the next generation of priests.”

Besides having no ordinations this year, the archbishop has said the Archdiocese of Detroit stands to have fewer than half its current number of priests within 10 years, if current trends hold, leading to further strain on an already aging and stretched-thin presbyterate and a significant impact on parish life.

While the situation is concerning, it’s far from hopeless, the archbishop said.

“Prayer is not an afterthought, but our first thought,” Archbishop Vigneron said. “If we pray with faith as Jesus says, ‘we will be able to move mountains’ (Mt. 17:20)."

“God has not abandoned his Church and will certainly not leave us in our time of need,” he added. “Each year we celebrate the Resurrection of Christ at Easter; this is the basis of this hope, made our own through our sharing in his death and resurrection.”

Yet, it’s important not to lose a “sense of urgency” about the priest shortage, the archbishop said.

“Many parishioners have not felt the effect of this shortage, thanks to the heroic effort of pastors who give of themselves generously out of love,” he said. “Many priests forego vacations, do not take a day off, and stretch themselves and their schedules to celebrate numerous Masses each weekend, while also hearing confessions and being pulled in many other directions. In a great number of cases, pastors delay their retirements because they understand the need and truly love being priests and ministering to the flock entrusted to their care.”

The archdiocese’s transition to Families of Parishes is a response, in part, to this reality, he said, as fewer and fewer priests are available to care for the archdiocese’s 215 parishes.

Even with a quick response to the crisis, it typically takes seven or eight years for a man to be ordained after entering the seminary, the archbishop said. 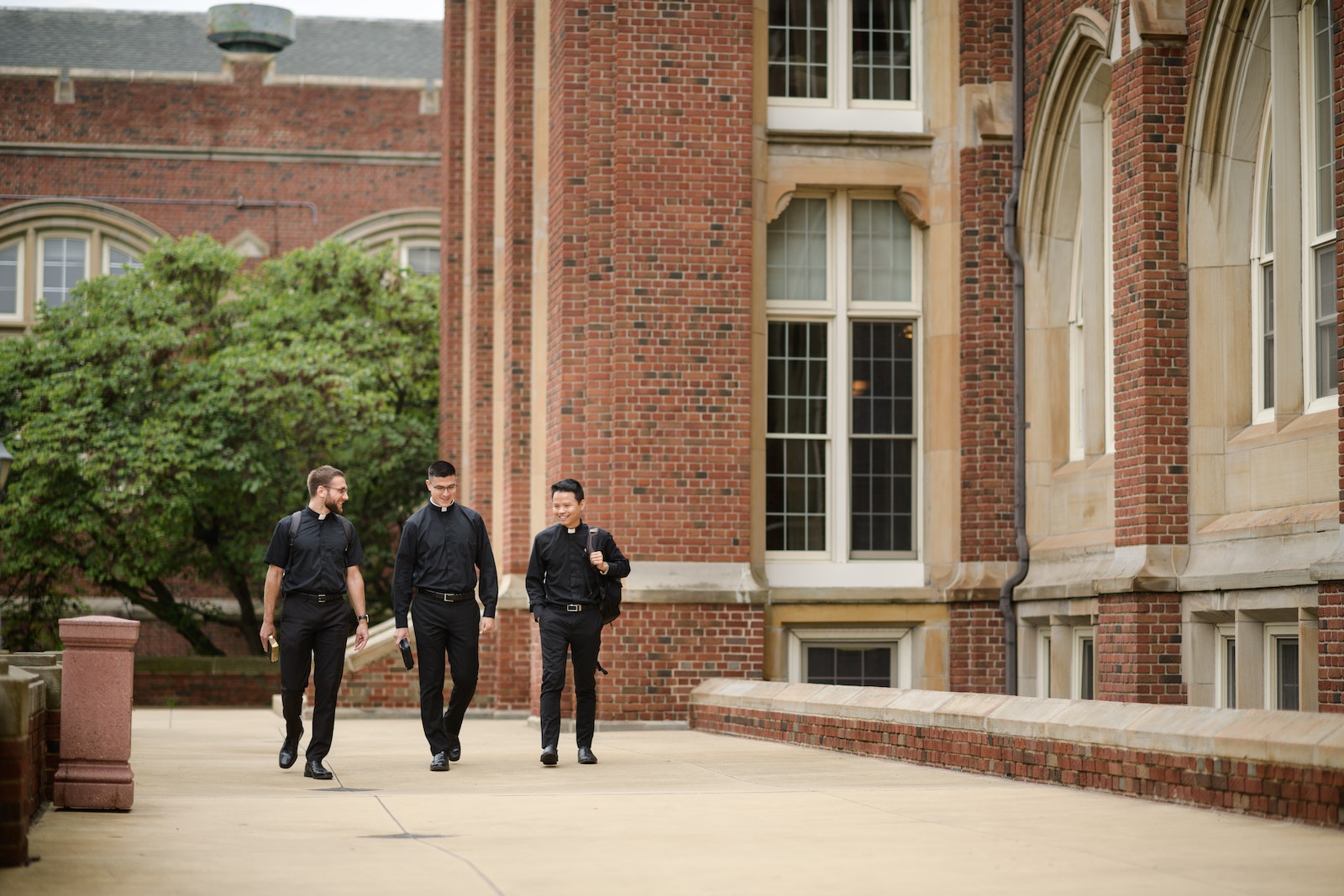 Seminarians walk the porch at Sacred Heart Major Seminary in Detroit. It typically takes seven or eight years for a man to be formed for priestly ministry, meaning there are no "quick fixes" to the vocation shortage, the archbishop said. Nevertheless, God will provide for the archdiocese's needs, he added. (Marek Dziekonski | Special to Detroit Catholic)

Beyond the need for prayer, current priests can have a “profound impact” on young men who might be discerning a priestly calling, the archbishop said.

According to a 2022 study by the Center for Applied Research in the Apostolate (CARA) at Georgetown University, 71 percent of this year’s ordination class reported they were personally invited to consider the priesthood by their parish priest, the archbishop pointed out.

“We need to invest time to invite men into the brotherhood we share in Christ,” Archbishop Vigneron said, addressing his fellow priests. “Who is going to respond if we do not invite them to hear God’s call?”

The archbishop also called on parishes, schools and religious education programs to actively participate in the year of prayer, inviting teachers to openly talk about vocations in class and encourage young people to discern God’s calling in their lives.

“Often, a man entering seminary has been asked by many people from his community if he has ever considered the priesthood,” he said. “These are little, but important, confirmations that encourage him to take the next step.”

Sadly, Archbishop Vigneron said, many young men considering seminary do so without the support of their immediate families, often out of a fear of “losing a son.”

“Does not God, who knew us before we were knit in the womb of our mothers, know our sons best?” Archbishop Vigneron said. “Becoming a priest does not mean a son will be lost to you; he will continue to be an integral part of your family as he also becomes part of the wider family of the Church as ‘Father.’”

Finally, the archbishop said, men discerning a vocation need to know how much the Church needs and prays for them — despite the fact that priesthood is not an easy calling.

“Men called to the priesthood are not called to a life of ease. Like our Lord, they are called to one of sacrifice,” the archbishop said. “Do not worry that you are not perfect, because Jesus is not calling the perfect … Rather, he calls those who are faithful and put their trust in his strength, not their own.” 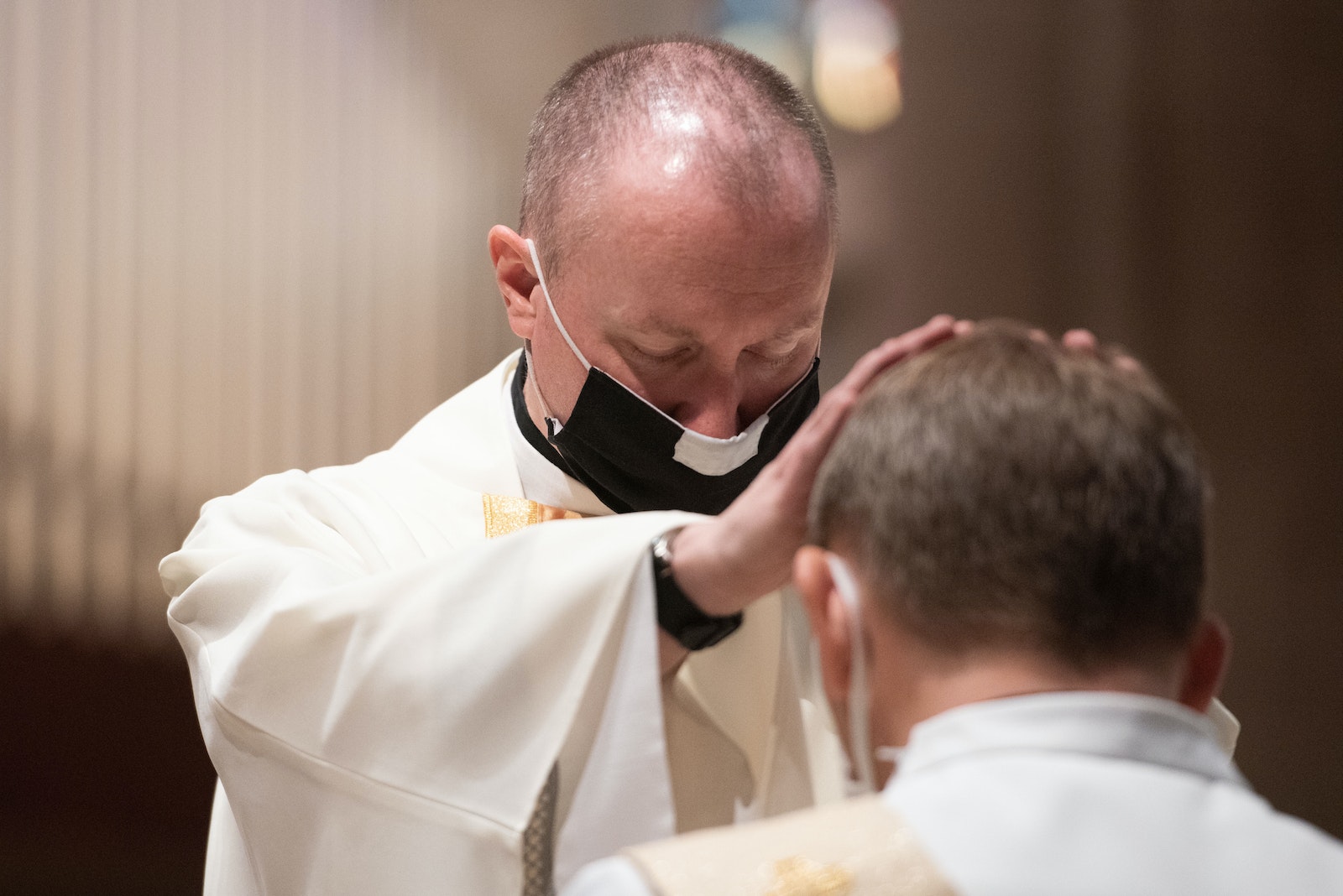 Fr. Andrew Dawson blesses Fr. John Dudek during Fr. Dudek's ordination Mass in May 2021 at the Cathedral of the Most Blessed Sacrament. Although the priesthood is a vocation of sacrifice, men who are discerning should know the love and support of the faithful they will serve, the archbishop said. (Tim Fuller | Special to Detroit Catholic)

Archbishop Vigneron urged men who are discerning a vocation to spend time in Eucharistic adoration, daily Mass and silent prayer to grow closer to Jesus in the Blessed Sacrament.

Discerners can also volunteer to serve at Mass, work with the poor and grow in virtue through Marian devotion and by regularly praying the rosary, he added.

“A man must realize he is loved by God and he must respond to that love by an act of offering and sacrifice,” the archbishop said. “Just as in any relationship of love, it can only grow by spending time with the beloved.”

As the archdiocese begins its Year of Prayer for Priestly Vocations, Archbishop Vigneron said parishes can participate by hosting monthly holy hours, praying for an increase in vocations during the Prayers of the Faithful at Mass, fasting or abstaining from meat on First Fridays in honor of the Sacred Heart of Jesus, and praying the Luminous Mysteries of the rosary for priestly vocations.

Further resources for parishes, schools, religious education programs, families and individuals can be found at www.prayforvocations.com.

“Together, let us spend this year in prayer asking the Lord to send us shepherds after his own heart,” Archbishop Vigneron said. “Trusting in God always, we give thanks ahead of time for the abundant harvest that will come from this Year of Prayer for Priestly Vocations.”

Read Archbishop Allen H. Vigneron’s pastoral note, “Forming Men of the Hearts: A Pastoral Note on the Year of Prayer for Priestly Vocations,” in both English and Spanish.

For further information and resources about the Year of Prayer for Priestly Vocations, visit www.prayforvocations.com. The faithful are invited to attend a Holy Hour to pray for vocations at 10 a.m. Saturday, June 4, at the Cathedral of the Most Blessed Sacrament in Detroit.