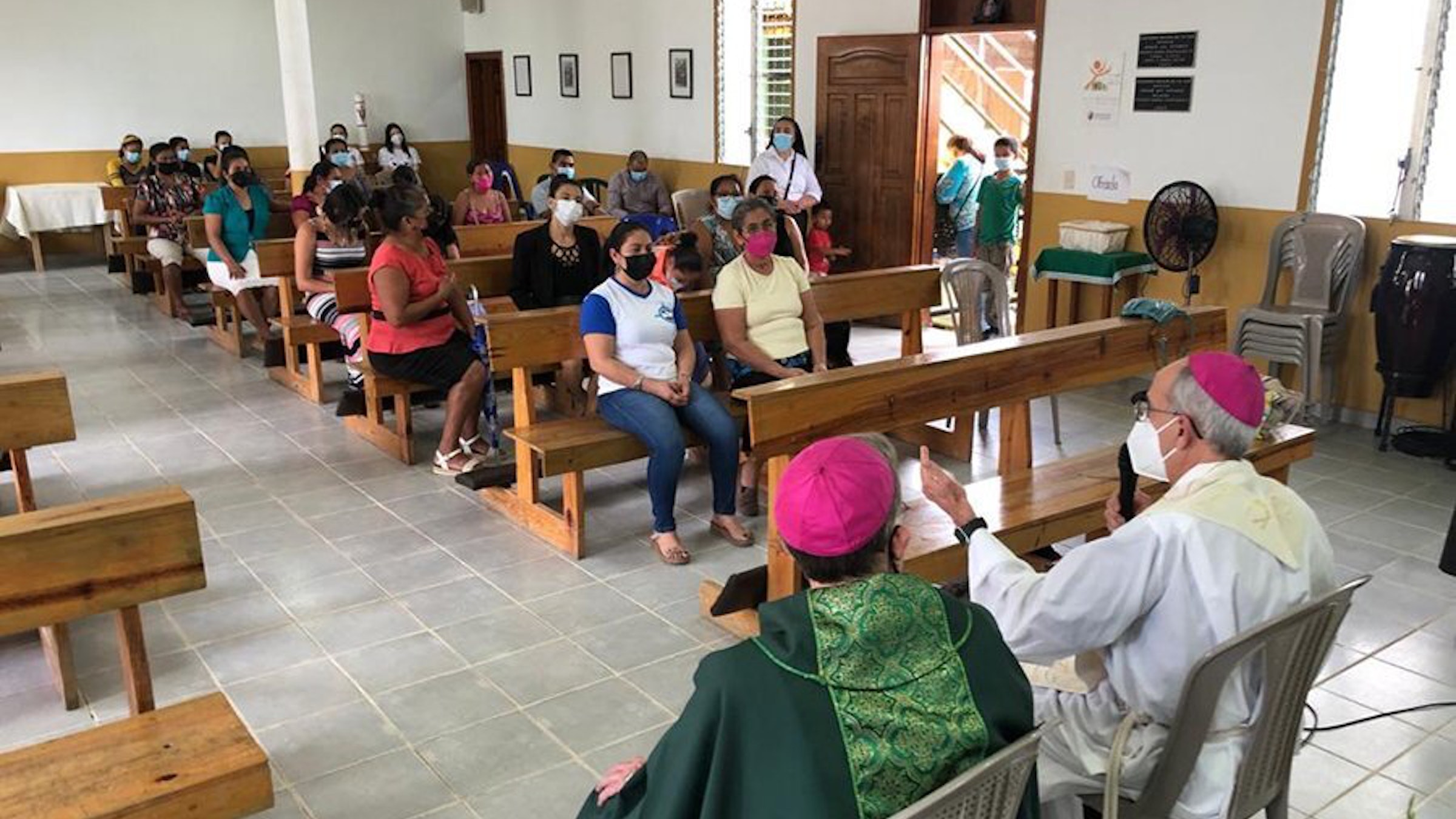 Archbishop John C. Wester of Santa Fe, N.M., and Bishop Mark J. Seitz of El Paso, Texas, speak with and listen to members of a community on the outskirts of Tegucigalpa, Honduras, Oct. 25, 2021. The community has one of the highest rates of migration in the country, even as those present told the prelates that their wish is to have a country where they and their children could thrive. (CNS photo/courtesy Dylan Corbett, Hope Border Institute)

WASHINGTON (CNS) ─ A few weeks before Honduras' Nov. 28 presidential election, two bishops from the U.S. quietly landed in the country's capital of Tegucigalpa with a mission Pope Francis has placed on the world's Catholic prelates: to listen.

In the case of Bishop Mark J. Seitz of El Paso, Texas, and Archbishop John C. Wester of Santa Fe, New Mexico, who are involved in efforts by the U.S. Catholic Church to help migrants from the Americas, the mission meant traveling Oct. 24 and 25 to small and impoverished communities on the outskirts of Tegucigalpa.

That's where they heard stories from those left behind in settlements largely abandoned by much of the local population and from some who tried to leave. They told the bishops of sons and husbands, daughters and mothers who used the strength of their youth to head north to the U.S., seeking safety or seeking to fulfill dreams impossible to achieve in their country.

"We went up and down those dirt streets in our little four-wheel drive and we saw the water trucks going by, people having to buy water every day," because there isn't any potable water where they live, said Archbishop Wester in a Nov. 17 interview with Catholic News Service in Baltimore, where the bishops were holding their fall general assembly.

The lack of vital goods and services, such as water, the lack of education and jobs to cover daily living expenses are just few of the reasons many leave. As some have been forced to return, deported or injured on the way north, bishops in their countries have established ministries to help them, even as resources are scarce.

Dylan Corbett, of El Paso's Hope Border Institute, who accompanied the bishops on the trip, said they saw one particular ministry that helps people who lost limbs during their attempt to reach the U.S. It is run by a man who lost a leg along the journey.

The U.S. bishops also spent time listening to a Honduran family who fled north after gang members began pressuring their son to join their criminal enterprise. The father, who broke into tears, told them how they fled north seeking refuge, Archbishop Wester said, but instead they were deported.

When they returned to Honduras, gang members found out they were back and riddled their house with bullets, injuring the husband and his wife. They had to flee again.

"That was very, very moving to me and it really underscored ... when we say that people are fleeing, when we talk about the root causes of immigration, forced immigration, it underscored the reality of how much people are suffering," Archbishop Wester said.

The October trip was part of an effort by a group of prelates from the United States who has recently started collaborating with bishops from the so-called "Northern Triangle" countries of Guatemala, Honduras and El Salvador, seeking solutions to help people stay in their home countries, trying to dissuade them from taking the dangerous trip north.

But in case they leave, they also advocate for the migrants, for ways to help them once they've made the decision to flee, or to see how the church can help people, like the family they met, who are forced to return.

The two bishops have spoken out against policies that turn back migrants seeking asylum or that make them wait in Mexico, in dangerous border towns, until their immigration cases are heard.

Meeting with their counterparts in Honduras who are sometimes left to deal with the aftermath was "very important and I really enjoyed that a lot because I got to listen to them and hear firsthand what their concerns were about immigration, about the people that they serve," Archbishop Wester said.

They also heard some of the Hondurans' discontent with their government, said Bishop Seitz.

"Well, one thing we certainly heard was the frustration that they have with their own government," said Bishop Seitz Nov. 17, days before the presidential election. "They're very concerned that people don't have the ability to improve the system by themselves, that the power has always been in the hands of a relative few and it's perhaps even more the case right now that the government is so directly implicated with the movement of drugs."

Honduran prelates had issued a statement prior to the election telling voters not to support candidates "stained" by drugs, corruption and other crimes.

"They've been speaking out very courageously about this reality and I think at some personal risk," said Bishop Seitz.

If bishops are tasked with addressing the reasons people leave Central American countries such as a Honduras, the truth about root causes in those countries needs to be spoken about, he added.

High voter turnout, likely fueled by the discontent such as that witnessed by the prelates, produced a win for leftist Xiomara Castro. The president-elect is now left to contend with the issues that have plagued Honduras for a long time and have led many to leave.

What Hondurans are doing -- migrating because of unfavorable conditions -- is something the ancestors of many U.S. citizens took part in, too, said Bishop Seitz.

"It's something that human beings do, again and again," he said. "They don't do it just for fun. They do it when they are impelled by the realities in which they live."

"When they come into our country, they're not just coming here because (they say), 'Well, maybe I'll give it a try.' They're coming here to survive," Archbishop Wester said.

But there are forces, voices that "flame the fire of prejudice and bigotry" for popularity, said Archbishop Wester, and paint a false narrative of the situation.

There also are other reasons to help, said Bishop Seitz.

"The United States bears some responsibility for the fact that those people are living in such instability. ... We can go into historical reasons, but we could also talk about how we're providing (drug cartels and other criminal elements) money because of our addiction to illegal drugs," Bishop Seitz said. "It's our money that is doing this to them."

The "human reality" of world events drove movements of people away from home in the past, but many found a new home in the U.S., he said.

"We are all the descendants of that reality, " he said. "We need to recognize that that's been part of the genius of our country that we have not resisted. In fact, we've seen it as part of our identity: that we welcome those who were needing a new opportunity.

"It has made us in so many ways the greatest country in the world. If we lose that genius, that willingness to integrate into our country, those who are coming from other places, we're going to lose also some of the things that truly made our country what it is today."

For Corbett, the trip showcased some of the best works of the church across borders. The chapel where they celebrated Mass filled up with those eager to hear the bishops but also to tell them their stories.

"They were so moved by presence of bishops of the United States ... and with the work of the church to galvanize solidarity with our countries, to push policymakers to make effective changes," he said.