In the French foothills, a Detroit sister has served poor pilgrims for 45 years 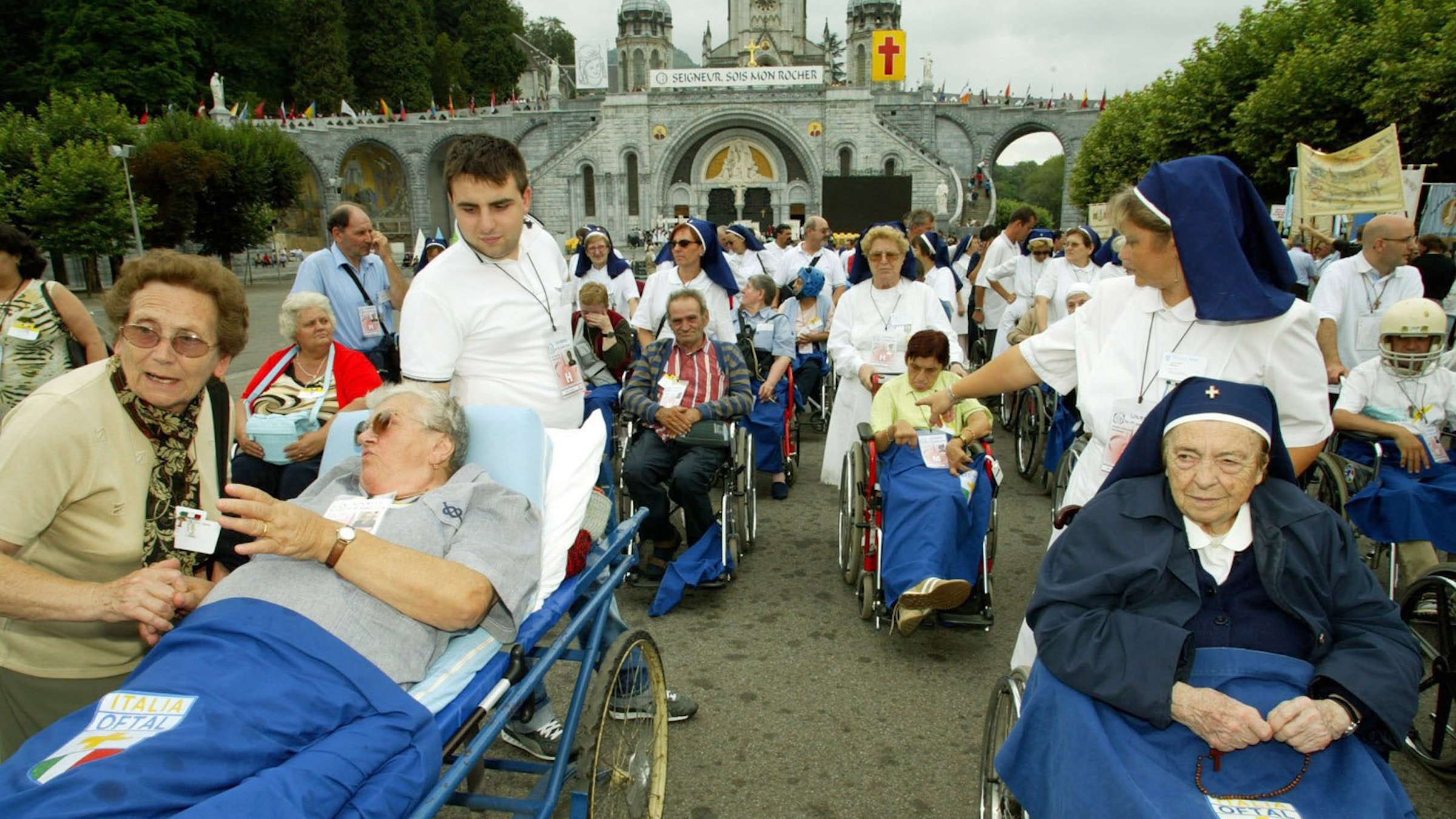 Sick people in Lourdes, France, are assisted by caretakers in this 2004 photo. The sick come to Lourdes from all over the world seeking a cure from their ailments in the healing baths of the grotto where Our Lady appeared to St. Bernadette. A Detroit sister, Sr. Rose Mary Sam, IHM, has ministered there for nearly 45 years. (CNS photo via Reuters)

MONROE — Sr. Rose Mary Sam’s 45-year streak of visiting Lourdes was broken two years ago when the 83-year-old Immaculate Heart of Mary sister was clamped between two glass electronic doors at the Shrine of St. Therese.

“I was going too slowly,” Sr. Sam said with a good-natured laugh. “I was pushed to the stone ground, but luckily I didn’t break a bone. I had to come home to get patched up, though. I feel it was God’s miracle to me, to calm me down. But now I’m as good as gold and active as ever.”

Sr. Sam’s wonderful spirituality and hard work has been felt on the holy grounds of Lourdes since she first arrived in 1968 while studying on scholarship as a student.

“I never should have gotten that scholarship,” Sr. Sam told Detroit Catholic. “I had not made my final vows yet. But the Mother General at the time told me to apply to the education committee, who decided who got to go. It took six days for me to hear back from them. I was a nervous wreck. The sisters came back to me and said, ‘Go and make the best of it.’ So, I went.”

At the end of the nine-week study program in Paris, each student was given five days to do whatever they wanted. Sr. Sam rushed down to Lourdes and arrived on Aug. 16 — the day after the feast of the Assumption.

“There were so many people you could barely walk,” she said. “It was like a miracle. I got a room at a convent, and that was my first venture to Lourdes. It remains a wonderful memory.”

Six years later, Sr. Sam asked her superior if she could go back to Lourdes and work there during the summer. Her request was approved, and that’s when the work really began, inspiring Sr. Sam’s 45-year legacy of helping others achieve a transformative spiritual experience at the holy places where Our Lady’s apparitions to St. Bernadette took place.

“I made contact with the French community of nuns,” Sr. Sam said. “They sent me an application for Cite Saint-Pierre, or City of the Poor, a hostel in the foothills of the Pyrenees. They take volunteers from all over the world. You meet all kinds of people there. We served meals, cleaned and gave tours for our room and board. It felt like this work at Lourdes opened to me like a miracle. It’s such a magical place.”

Cite Saint-Pierre was built in 1956 by Bishop Jean Rodhain to realize St. Bernadette’s wish to share the apparitions at Lourdes with the “poorest of the poor.” Individuals and families who can’t afford hotels at Lourdes receive food, shelter, medical services and spiritual direction during their pilgrimage.

A teacher for more than 50 years at Michigan Catholic high schools such as Bishop Gallagher, Notre Dame and Regina, Sr. Sam has inspired students, parents, parishioners and friends to join her at Lourdes and serve as volunteers at the “City of the Poor” — so much so that the Catholic Foundation of Michigan created the Our Lady of Lourdes Pilgrimage charitable fund to continue Sister Sam’s 45-year mission.

The idea for the scholarship fund came from Rosanne Bommarito Brugnoni, a former student at Bishop Gallagher in the late 1970s who wanted to honor her former teacher.

Brugnoni was reunited with Sr. Sam when her daughter started attending Regina High School in 2009. In 2017, Sr. Sam asked Brugnoni and her daughter Monica to accompany her to Lourdes. They stayed at the City of the Poor and worked in the cafeteria, getting up at six in the morning to prep for breakfast for 300-400 people a day. Afterward, mother and daughter would wash the floors and all the tables before they started prepping for lunch, and later do it all over again for dinner.

“We did that for 10 days straight,” Brugnoni said. “It was such an amazing experience. All these people from around the world were looking for hope, healing and reconciliation. The whole transformative spiritual journey really. It didn’t even matter what religion they were.”

The fund created in Sr. Sam’s name will help provide two University of Detroit Mercy students with the chance to join medical professionals in caring for the sick and dying who have made the spiritual trek to Lourdes.

“Lourdes is so hard to describe,” Brugnoni said. “It’s such a humbling experience to visit the grotto. You see so many people who are handicapped, and the line every day is a mile long. When it’s your turn to go in the baths, they pull a curtain and escort you down the steps. You’re completely submerged in the holy water as people pray over you with the Blessed Mother’s statue right in front of you. It still gives me chills. It’s emotional for me to talk about it even now. You’re reminded of Bernadette and the Holy Mother, and you feel touched by the Holy Spirit.”

With Sr. Sam’s guidance, many have felt this sense of renewal from their trip to Lourdes. And she isn’t slowing down yet. Sr. Sam plans to continue her service with the Order of Malta – American Association to help others plan and enrich their journey to experience the magic and prayerful devotion of Lourdes.

Sr. Sam, who grew up in Detroit in a large Lebanese American family — her parents came over straight from Lebanon — was always interested in food and culture and languages, which is how she became a teacher of French.

“My dad and his brother worked with an uncle and became quite prosperous with these neighborhood-friendly grocery stores,” Sr. Sam said. “However, when the bigger supermarkets like C.F. Smith opened, there was such intense competition for the small neighborhood stores. My parents were very far-sighted and saw the need to emphasize the importance for us kids to get an education. It was a wonderful change and we learned a love of education from my parents.”

“When I was 19 years old, I thought about entering the convent, but with my parents gone my work was cut out for me. As the second oldest in the family, I stayed home, and we took care of each other. God blessed those four years while I was going to school and getting an education,” she said.

“I was still thinking about becoming a sister, and I asked God to let certain things work out. We had to sell our home and get the three younger ones situated. All of these things happened, so I joined IHM in 1961 and our class is celebrating our 60th anniversary as sisters.”