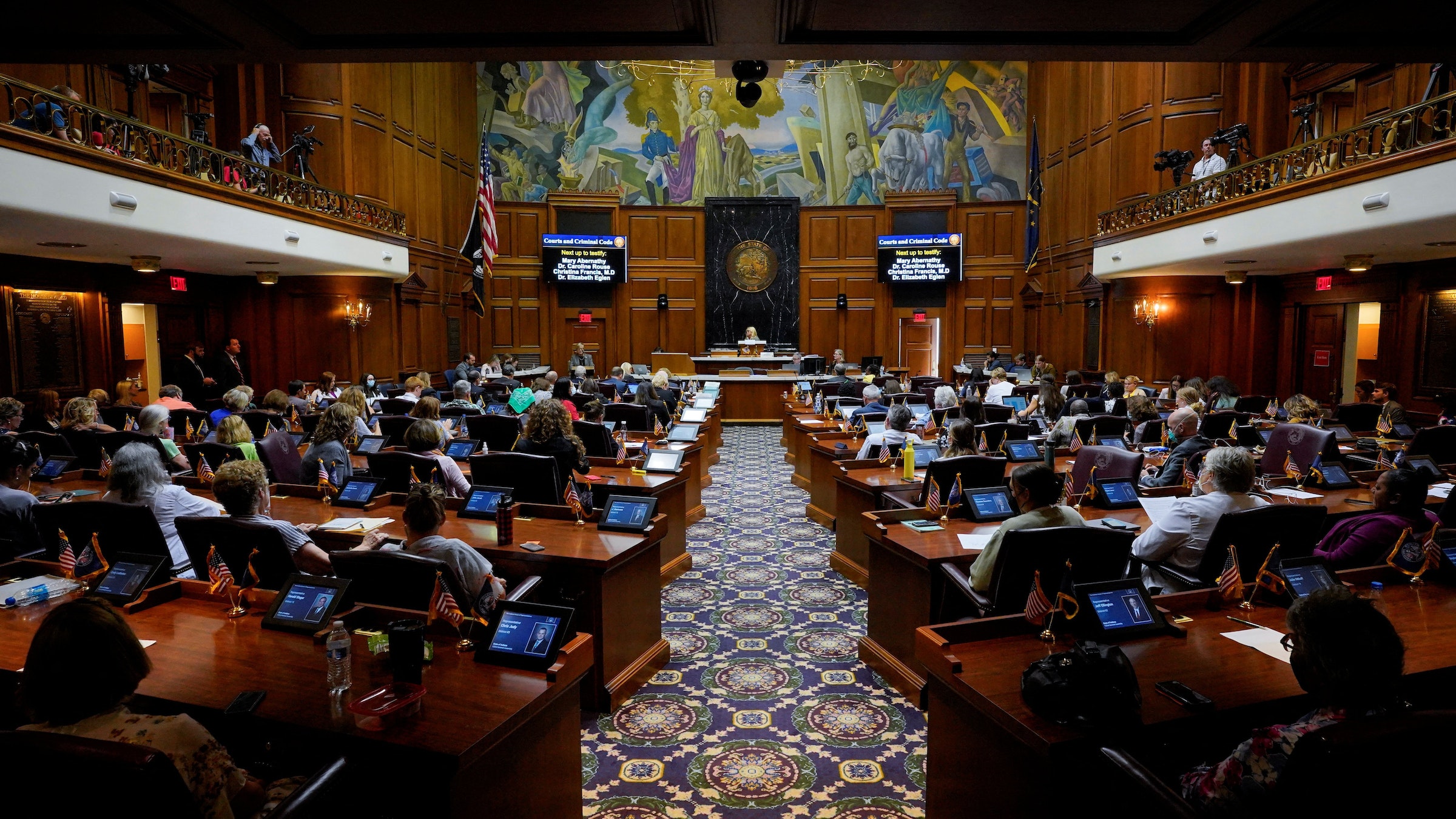 State lawmakers and members of the public gather in the House chambers in the Indiana Statehouse in Indianapolis Aug. 2, 2022, during a special session to debate banning abortion. (CNS photo/Cheney Orr, Reuters)

INDIANAPOLIS (CNS) ─ The Indiana Senate burned the midnight oil during the first week of a special session of the General Assembly as it considered dozens of proposed amendments to a Senate bill that would ban most abortions in the state.

The bill, S.B. 1, was made possible by the U.S. Supreme Court's June 24 Dobbs ruling that overturned the 1973 Roe v. Wade legalizing abortion nationwide. The decision returned the issue of regulating abortion to the states.

While Gov. Eric Holcomb had originally called a special session of the Indiana General Assembly to consider inflation relief for Indianans, the Dobbs ruling soon put abortion law in the forefront as legislators returned to the Statehouse.

The General Assembly is the first state legislature in the country to meet in a special session to consider abortion legislation.

With advocates opposed to S.B. 1 making their voices heard outside the chamber July 30, senators narrowly passed it in a 26-20 vote.

Although the debate and vote on S.B. 1 may have gained the lion's share of media and protesters' attention during the first week of the special session, legislators at the same time came together in a bipartisan effort to approve aid to mothers and families in need and inflation relief for all Hoosiers.

During the special session's first week, leaders of the Indiana Catholic Conference, the public policy voice of the Catholic Church in Indiana, advocated for the strengthening of S.B. 1, another Senate bill, S.B. 2, and a House bill, H.B. 1001.

S.B. 1, which moved to the House for consideration following the July 30 Senate vote, would give legal protection to all unborn life in the state except for those conceived in rape or incest, in cases in which the life of the mother was at risk and in cases of fatal fetal anomalies.

"The amendment process strengthened S.B 1 from the ICC's perspective and addressed some of the original bill's pitfalls," said Alexander Mingus, associate director of the Indiana Catholic Conference.

"As a whole, the bill as it stands would better protect preborn children compared to current law," he told The Criterion, newspaper of the Archdiocese of Indianapolis.

Some senators voted against S.B. 1, objecting that it did not protect unborn life enough.

Although the bill would allow abortions in limited cases, the Catholic conference supports the bill, following St. John Paul II's 1995 encyclical "Evangelium Vitae" ("The Gospel of Life"), which allows for the support of laws that would limit the harm done by intrinsic moral evils, like abortion, if a complete ban is not politically possible.

The Indiana Catholic Conference will continue to advocate for amendments that would strengthen S.B. 1 as it moves to the House.

S.B. 2 and provisions in H.B. 1001 have been proposed by legislators as a companion to S.B. 1, offering aid to mothers and families in need at the same time that legal protection is being extended to most unborn children in the state.

S. B. 2 would create the Hoosier Families First Fund and put $45 million in it for a variety of programs and initiatives.

"The Catholic Church has a history of providing aid, comfort and support for mothers and families," said Angela Espada, executive director of the state Catholic conference.

"It hopes that the allotted $45 million will improve the lives of Hoosiers by supporting adoption, pregnancy planning, the health of pregnant women, postpartum mothers, and infants, along with supporting the needs of families with children less than 4 years old," she said. "Additionally, there are funds to address the barriers to long-acting reversible contraception."

Among the few proposed amendments to the House bill that were adopted, one would fund instruction for natural family planning.

As S.B. 2 moved to the House and H.B. 1001 moved to the Senate, Espada was looking to advocate for amendments the Senate failed to adopt, including tax credits to employers who give paid family leave and reasonable and effective pregnancy accommodations.

Gallagher is a reporter at The Criterion, newspaper of the Archdiocese of Indianapolis.