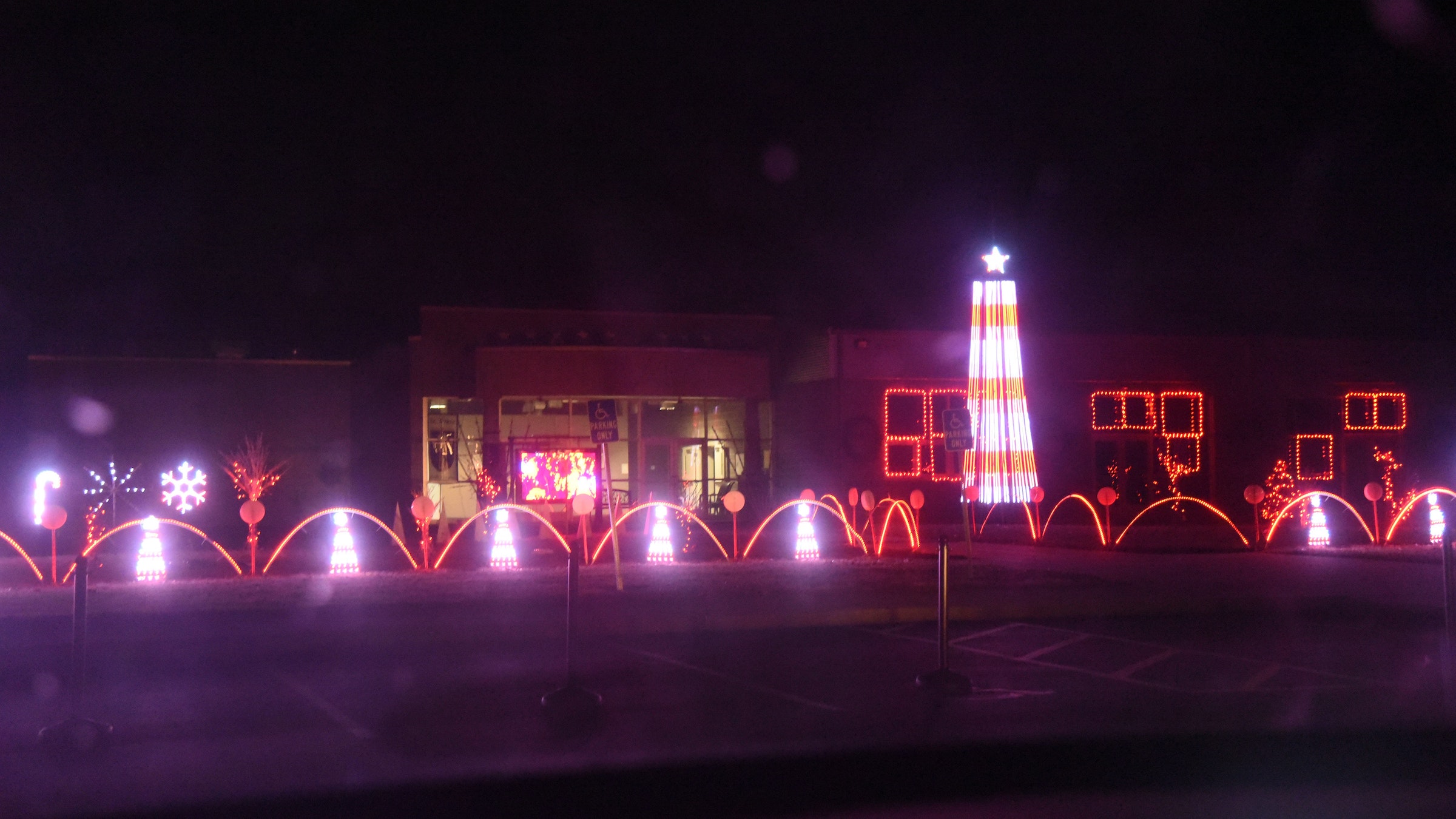 Synchronized lights are seen at the back of the campus of St. Teresa Benedicta of the Cross Parish in Bright, Ind., Nov. 25, as part of its "Bright Lights" Christmas lights display. (CNS photo/Sean Gallagher, The Criterion)

BRIGHT, Ind. (CNS) ─ As dusk turned into darkness Nov. 25, the day after Thanksgiving, colorful Christmas lights began illuminating 19 acres on the campus of St. Teresa Benedicta of the Cross Parish in Bright.

The 100,000-plus lights weren't there just to light up the night sky. The purpose of the "Bright Lights" display is to let the light of Christ shine in the souls of the people who view it.

"People who don't believe in Jesus will spend thousands of dollars decorating their yards with lights. So, my whole thing was, 'Hey, I would like to somehow reach out to those people,'" he said.

Father Meyer is pastor in solidum with Father Daniel Mahan of St. Teresa and the other three parishes in Dearborn County -- All Saints and St. Lawrence in Lawrenceburg and St. Mary in Aurora -- in southeastern Indiana near Cincinnati.

In what could be described as drive-thru catechesis, signs next to the various features of the display explain how ordinary holiday images are rooted in the Catholic faith.

Lighted images of an angel and Mary have a sign that explains the Annunciation. Signs by large lighted plastic candles tell visitors these are a reminder that the Christ Child is the light of the world.

Next to several Nativity scenes are signs with short prayers.

"If we can just help people say those words, I don't know what God will unlock in their hearts," Father Meyer said.

In addition to the signs, people driving through the campus can tune to two low-power FM radio stations to hear Christmas music and explanations of the display.

The culmination of the light show is a large, synchronized display at the back of the campus, with tens of thousands of lights blinking in time with music that viewers hear through their car radio.

Volunteers staff the free display when it's open to the public -- from 6 p.m. to 10 p.m. on Fridays, Saturdays and Sundays through Jan. 6.

They meet people as they drive onto the campus and give them flyers that provide more information about the display and the parish.

One of the first people to visit the light show was Merita Glaub, a member of St. Anthony of Padua Parish in Morris, Indiana, who said the display's Catholic themes "made me feel at home."

A Baptist friend who came with Glaub said the display's Christian aspects were welcoming.

"I was very impressed with it," said Sharon Norman, a member of Dearborn Baptist Church in Manchester, Indiana. "The amount of work and time to do this was phenomenal. I love the way everything was done. Christ was brought in."

Most of the features in the display were donated by Dearborn County Catholics. The only major costs were purchasing the synchronized light display from a previous owner and buying and installing wiring on the campus for the light show.

Funds for the purchases came from the Indianapolis archdiocesan Growth and Expansion Grant Fund offered through the archdiocesan Catholic Community Foundation.

Father Meyer noted that Bright Lights was the last of four events held around Thanksgiving by the four parishes to reach out to the broader community.

As he looked at the acres of lights at St. Teresa, Father Meyer said that Bright Lights and the other events in Dearborn County around Thanksgiving were a way for the parishes to share the Gospel with the surrounding community.

"This is a way to reach out," Father Meyer said. "It's a way to be with people. I like to refer to it as non-threatening evangelization. We're trying to just allow things to speak, allow beauty to speak, allow truth to speak."

Gallagher is a reporter at The Criterion, newspaper of the Archdiocese of Indianapolis.