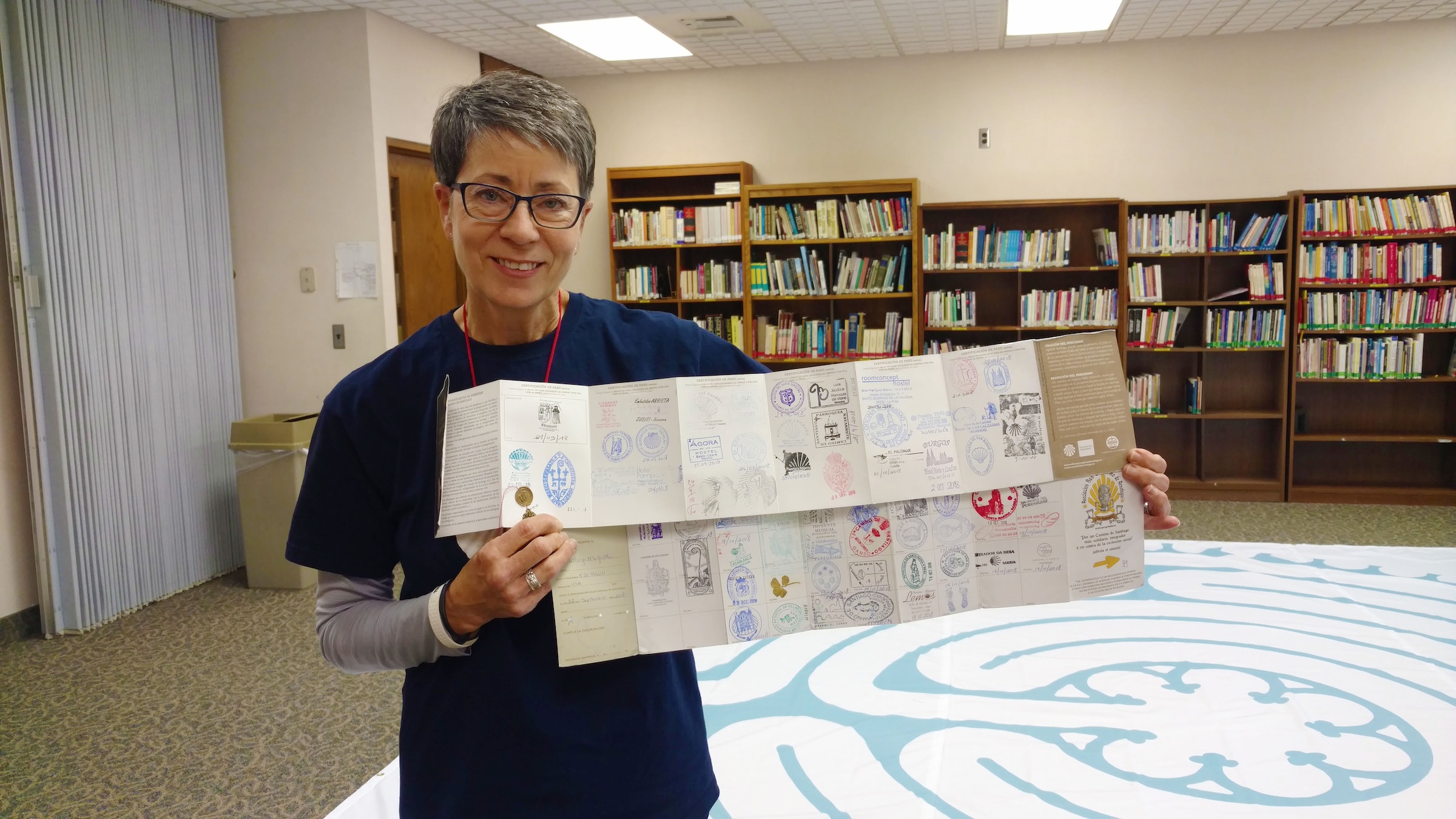 Kathy McGrath, a mother and parishioner at St. Blase Parish in Sterling Heights, holds up her “credencial” or “Pilgrim’s Passport,” stamped with the official St. James stamp for each town or refugio at which she stayed along the 500-mile Camino de Santiago, or Way of St. James, leading to the Cathedral of Santiago de Compostela in Galicia in northwestern Spain. (Laura Brestovansky | Special to Detroit Catholic)

STERLING HEIGHTS — Kathy McGrath undertook the Camino de Santiago (the Way of St. James) in honor of her son Tim. Along the monthlong, 500-mile trek, she found healing and personal growth for herself.

McGrath, a retired seamstress and active member of St. Blase Parish in Sterling Heights, recently returned from her pilgrimage. She was so impressed by her experiences that she is already encouraging others to follow suit.

The Camino is a network of "pilgrims' ways," or pilgrimages, leading to the shrine of the apostle St. James the Great in the Cathedral of Santiago de Compostela in Galicia in northwestern Spain, where tradition has it that the remains of the saint are buried. Many people from around the world follow its routes as a form of spiritual growth. It is also popular with hiking and cycling enthusiasts and organized tour groups.

Pilgrims have been following the Camino since the Middle Ages, but it has become more popular in recent years, thanks in part to the 2010 film, “The Way,” starring Martin Sheen and directed by his son Emilio Estevez. Last year, an estimated 310,000 pilgrims made the trip.

McGrath was inspired to take her pilgrimage after hearing her cousin, David Larwa, speak about his experiences. Larwa has completed seven such pilgrimages and speaks about the Camino throughout the archdiocese.

McGrath, whose son is recovering from a form of cancer that severely affected his face, chose to undertake the journey in his honor.

“As a mother, watching him face his challenges — and there was a lot of doubt and uncertainty — with so much resolve, made me want to do something,” McGrath said. “If he can do it, I can do this.”

Because pilgrims average about 25 miles a day — often through mountainous terrain — preparation was important. McGrath, an avid camper and hiker, trained for the trek, though she said she didn’t do as much mountain hiking as she should have. Like most pilgrims, she had her share of blisters, shin splints and other walking-related mishaps.

But even more than the bumps and bruises, the Camino gave McGrath a lifetime's worth of memories.

Early in the pilgrimage, a veteran pilgrim mentioned in passing she would be sending her backpack ahead, an idea that proved to be a lifesaver, McGrath said. At another point, when her boots failed her, the next village happened to have a store that sold shoes, backpacks and other items.

Spiritually, McGrath felt God’s presence in many ways. Many churches line the route, offering pilgrims the opportunity for Mass or prayer services. She also “felt the spirit in God’s greatest temple,” the great outdoors.

Spiritual growth also came by experiencing the diversity of other pilgrims, McGrath said: “In the albergues, hotels, and hostels, I’d see people in dreadlocks rolling joints and ‘youngsters’ in their 80s.”

She also learned to live on less — pilgrims are encouraged to pack minimally, limiting themselves to two changes of clothes, for example. The experience gave her an appreciation for immigrants and their challenges.

“I was able to let go of my expectations,” McGrath said. “I learned not to sweat the small stuff and to be more appreciative and to relish simplicity.”

At the end of the pilgrimage, participants may attend a Pilgrim's Mass in the Cathedral of Santiago de Compostela, where the Botafumeiro, one of the largest censers in the world, is operated during certain Solemnities and on every Friday, except Good Friday. McGrath also enjoyed a number of free concerts.

McGrath eagerly shows off her “credencial” or “Pilgrim’s Passport,” stamped with the official St. James stamp for each town or refugio at which she stayed. In one case, the stamp was replaced by a four-leaf clover given to her by someone inspired by her son’s story.

She also proudly received a “Compostela,” or certificate recognizing her completion of the journey. To receive the Compostela, pilgrims must affirm they made the pilgrimage for religious or spiritual reasons, complete the last 100 kilometers on foot or horseback or the last 200 kilometers by bicycle, and collect a certain number of stamps on the credencial.

To say McGrath found the experience worthwhile is an understatement; asked if she'll complete the Camino again in the future, her answer is an unequivocal "yes."

Recently, she assisted her cousin when he spoke about his seven pilgrimages at a meeting of Southeast Michigan Chapter of American Pilgrims on the Camino. She also plans to speak about her experiences at 7 p.m. on Feb. 25 as St. Blase prepares a special series based on “The Way” as an overarching theme. McGrath called it her gift to the parish, and relates her pilgrimage to everyday life.

“Two phrases pilgrims say to each other are 'Buen Camino,' (good Camino) and "Ultreia!" (press on),” McGrath said. “We have to just know that whatever happens is going to happen, and it’s all part of the Camino.”