King vs. pope: Why there’s never been a John II of England (Part I) 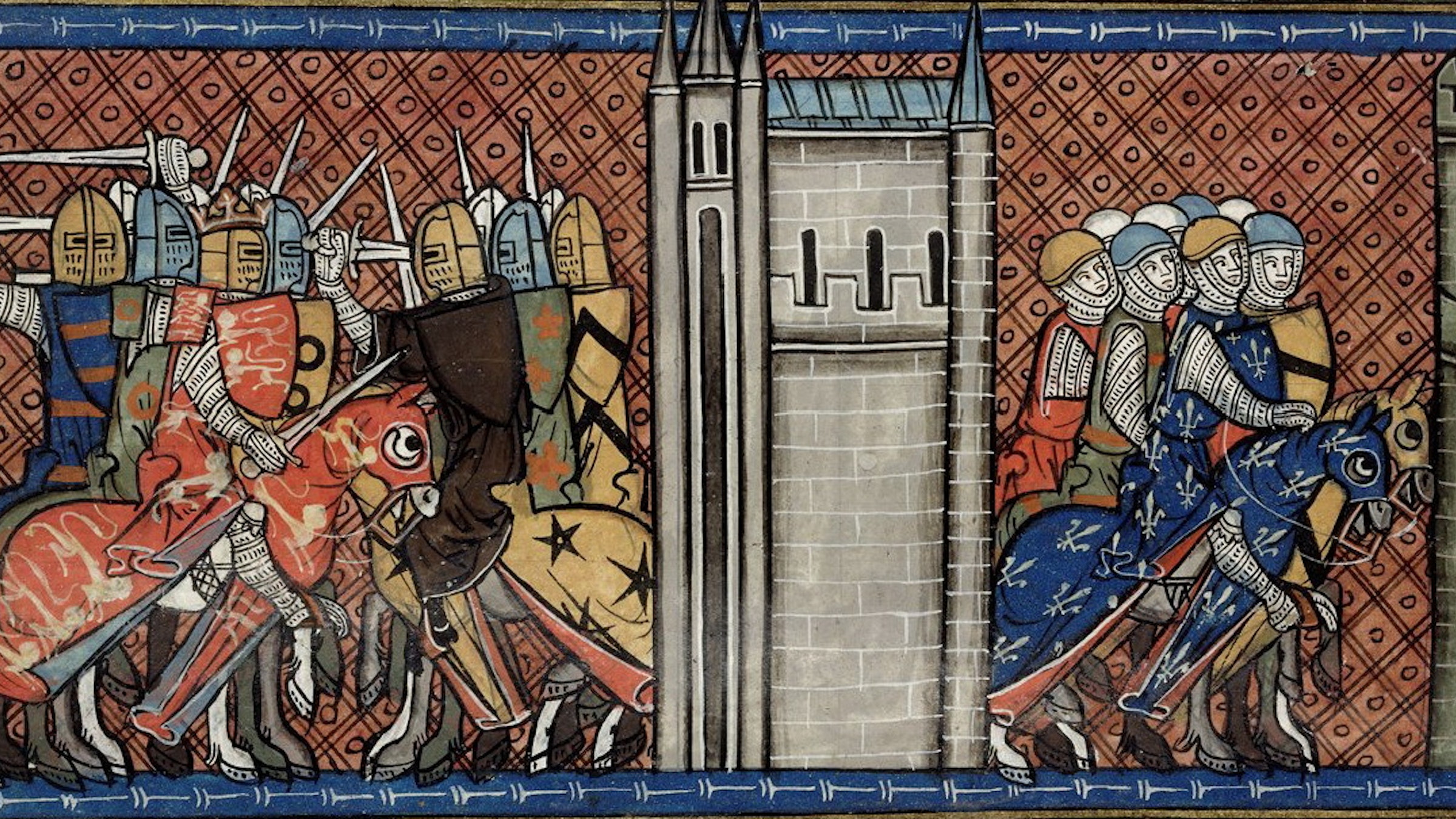 King John of England is depicted in battle with the Francs, left, with Prince Louis VIII of France on the march, right. (Wikimedia Commons)

The British monarchy is replete with two Charleses, three Richards, four Georges and four Williams, eight Henrys and the same number of Edwards. But never a second John.

Elizabeth II’s Platinum Jubilee this year celebrates her 70 years as queen, the longest-reigning monarch in English history. Her son, the Prince of Wales, shall come to the throne, please God, as Charles III. His elder son, the heir apparent, shall one day reign as William V. Although, had his mother been allowed her say, her son would become king as John II.

At the time of her son’s birth, Princess Diana had her heart set on naming the boy after her father, John Spencer, Viscount Althorp. The monarch has a say in such matters, and Elizabeth absolutely forbade naming her grandson John. Mark you, the queen harbored no ill will for the Viscount. It has become a tradition, nay, a responsibility of the Crown to keep England from having another John. And here’s why.

Henry II, king of England, with his wife, Eleanor, Duchess of Aquitaine, had eight children. For our purposes, we need be concerned with only two: Richard and John. John was his father’s favorite, but Henry had no lands left to bestow on the little prince, so he nicknamed the baby Jean Sans Terre, John Lackland in English. The name stayed with him all his life. 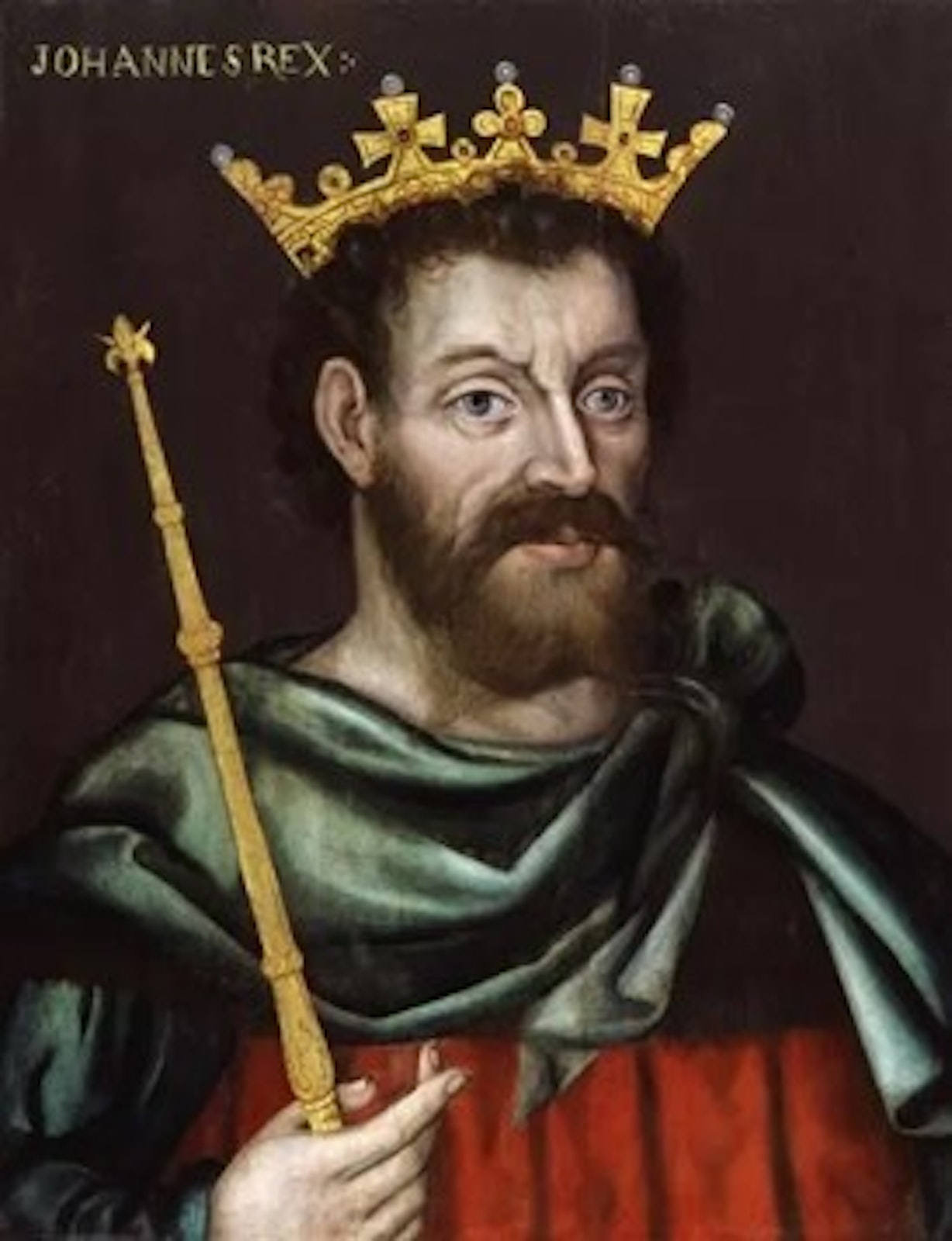 "Johannes Rex" is the name seen in the upper left corner of this painting of John Lackland, King of England, 1199-1216. (Artist unknown, created c. 1597-1618, National Portrait Gallery in London)

In 1156, Nicholas Breakspear, the solitary English pope, reigning as Adrian IV, awarded control of Ireland to England’s Henry II. It was a portentous decision. In 1171, Henry made the 11-year-old John “Lord of Ireland.” In 1177, at the age of 18, John visited the Emerald Isle, but proved to be seriously ineffective there. Returning home a failure, a disturbing facet of his character had asserted itself.

"It was in Ireland that King John revealed himself as a monster," writes professor Nicholas Vincent in “King John: The Making of a Medieval Monster.” “It was in Ireland too that he developed his taste for headhunting, collecting the heads of dead enemies as trophies.”

Red-haired, short and barrel-chested, possessed of a brutal nature, suspicious of all, and forever plotting, Prince John did not compare at all well with his brother. Richard was said to be an imposing 6’ 5”, fair of face, handsome, well-spoken and romantic, yet a ferocious warrior, the Lionheart, as he was known in life. Both names, a plotter and a hero, respectively, are familiar to devotees of the legend of Robin of Locksley, known to most as the outlaw Robin Hood.

In 1189, Richard rebelled against his father. With John’s support, Henry II was ready to disavow Richard as his heir, but the conflict broke Henry’s spirit, and he died before doing so.

Richard became the Lord’s Anointed as England’s king, but spent most of his time in France, enlarging and defending the Angevin empire. Richard also led the Third Crusade, battling to free Jerusalem and Christ’s tomb from Saladin and his Saracen hordes. Much to the Lionheart’s frustration, the Crusade ended in a draw.

On the king’s return to England, Duke Leopold of Austria kidnapped Richard, imprisoning him in a castle at Dürnstein. With his mother, Eleanor, the driving force, Richard’s ransom was found within 14 months, methodically gathered by Hubert Walter, Richard’s effective chancellor. The ransom demanded by Leopold, 150,000 marks, amounted to 65,000 pounds of silver, worth today some $15 million, an astronomical sum for the time.

While his brother languished in prison, John attempted a coup. It failed. Richard returned in 1194. Learning that John had conspired to surrender a large part of Richard’s lands in France to secure King Philip II’s recognition as king, Richard exiled John, stripping the would-be usurper of all his lands and castles. By 1195, however, Richard was moved to forgive, returning some of John’s lands and possessions and, in 1196, naming John his successor to the English throne. Having returned to France to continue his combat, Richard died there in 1199. 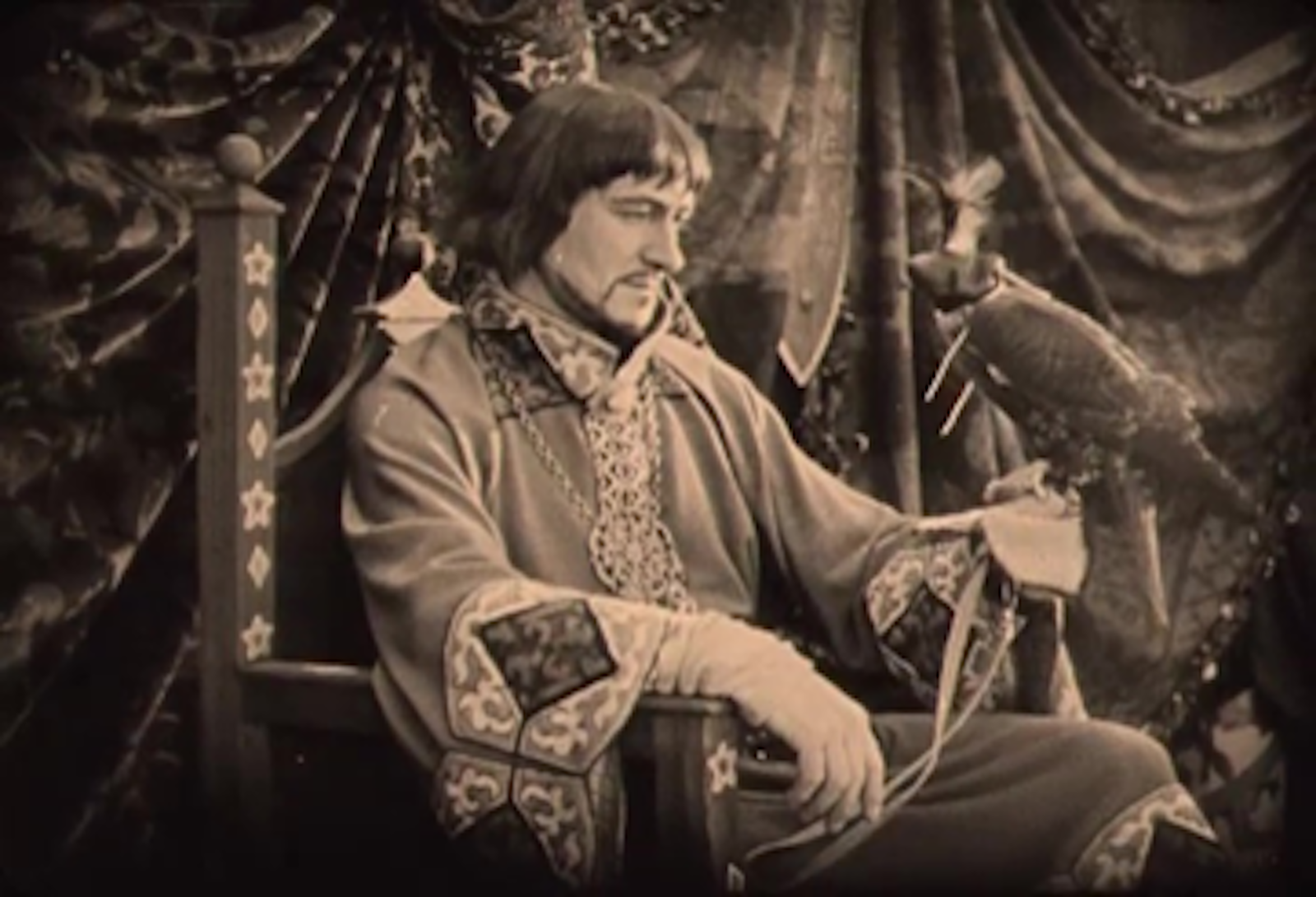 Prince John, at last, became the Lord’s anointed. He was crowned England’s king by the chancellor, Hubert Walter, who, like St. Thomas Becket, was also archbishop of Canterbury, nominated by Richard, as Becket had been nominated by Henry II.

Throughout history, Rome has attempted to work alongside various nation states for the public welfare while keeping secular rulers from encroaching on the rights of the Church. Monarchs and noblemen across Europe understood the influence of local bishops on those in their spiritual care. Kings often had their own advisors made bishops, then ennobled them, e.g., Pierre Cauchon, Count Bishop of Beauvais, was the main judge in the trial of Joan of Arc; a Prince-Bishop led the diocese of Münster; even today, the bishop of Urgell, Spain, and the president of France serve as the co-princes of the tiny nation of Andorra.

During the rite of episcopal consecration, the king invested a new bishop with a ring and crozier, symbols of his office. He thus demonstrated to the new bishop that his office came from the king, so his first allegiance was to the king, not to the Church. This policy, “lay investiture,” was resisted by popes for centuries as usurping the rights of the Church. It was fought against most zealously by Pope St. Gregory VII more than a century before King John involved himself with Church affairs.

The only compromise made by Gregory and his successors was to allow kings to make nominations for bishops in their realms. Even so, Rome was under no obligation to even consider the candidate. The final selection remained with the pope.

Hubert Walter died in 1205, leaving vacant England’s primatial see. Now it was John’s turn to nominate his own man as archbishop. However, Canterbury’s chapter of Benedictine monks was, by right, allowed to elect the archbishop. Reginald, subprior of Christ Church, was so elected and traveled to Rome to receive the pope’s approval and be consecrated bishop.

Nonetheless, John was going to be his father’s son and name his own candidate. From among the familiares regis, his inner circle of trusted advisors, confidants, moneylenders and drinking buddies, King John chose John de Grey, bishop of Norwich. John’s reckoning, faulty at best, was made without taking the pope into account. And the pope at the time was a man to be reckoned with.

Lothario di Segni came from a noble family in Rome which gave nine popes to the Church. After an excellent university training — theology at Paris, jurisprudence at Bologna — he served the papacy until, at the age of 37, he was elected pope. Taking the name Innocent III (1198-1216), he is regarded by many scholars as the most powerful of medieval pontiffs. Imbued with the fearless spirit of Gregory VII, Innocent did battle with kings and politicians in France, Sweden, Norway, Bulgaria and Spain upholding both Christ’s Gospel, and what he called “the liberty of the Church.”

Now it was England’s turn to learn.

The second part of this two-part series will be published next week.

Sean M. Wright, an Emmy-nominated television writer, is a Master Catechist for the Archdiocese of Los Angeles. He is also part of the RCIA team at Our Lady of Perpetual Help parish in Santa Clarita, CA. He responds to comments sent him at [email protected]