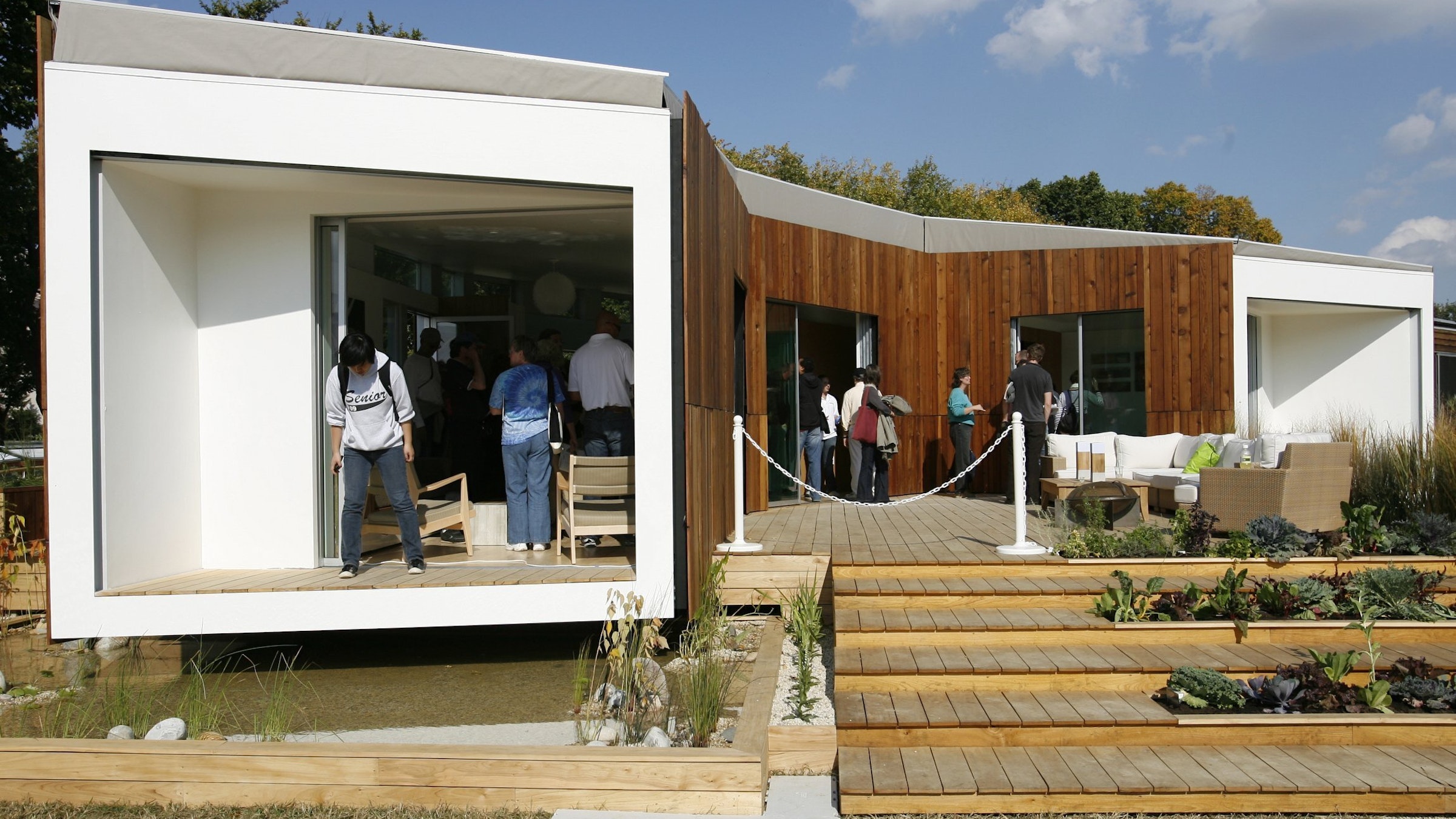 People tour a solar house Oct. 13, 2009, during the biennial Solar Decathlon sponsored by the U.S. Department of Energy in Washington. The house, constructed by students at Jesuit-run Santa Clara University in California and the California College of the Arts, finished third in the competition. (CNS photo/Bob Roller)

The Vatican's seven-year plan to widen the reach of Pope Francis' 2015 encyclical on the environment is just what the church needs in a time of global climate change in the mind of Father Emmet Farrell, a retired priest living in San Diego.

"The church is very serious about what we need to do to address climate change," Father Farrell, volunteer director of the Creation Care Ministry of the Diocese of San Diego, said of the Laudato Si' Action Platform that launches Nov. 14.

The pope introduced the initiative in a video May 25, asking the world to join a new global grassroots movement to create a more inclusive, fraternal, peaceful and sustainable world.

Coordinated through the Dicastery for Integral Human Development, the platform is "a seven-year journey that will see our communities committed in different ways to becoming totally sustainable, in the spirit of integral ecology," the pope said.

"We need a new ecological approach that can transform our way of dwelling in the world, our lifestyles, our relationship with the resources of the earth and, in general, our way of looking at humanity and of living life," he said.

Father Farrell is working on the effort with a team of lay leaders. The diocesan ministry has developed a "Creation Care Action Plan" that includes numerous actions -- from the simple to more complex -- that individuals, parishes and wider society can take to promote sustainability.

The ambitious San Diego plan falls in line with the dicastery's aspiration of building an integrated global effort to protect creation for future generations. The Vatican platform is meant to help those who want to increase their commitment to bringing the encyclical, "Laudato Si', on Care for Our Common Home," to life by promising to carry out a set of actions for seven years.

Father Farrell told Catholic News Service Nov. 11 his diocese joined the pope's initiative because failing to act to protect Earth is not an option.

"Laudato Si' is a spiritual and moral document. It's not political. It's spiritual and very moral, so the church has to be active," he said.

The priest described the initiative as "a church-based model for community organizing."

"The Vatican really is a leader in the world. In my more than 50 years as a priest, I have never seen the church doing what it's doing with this platform. They're saying it's not good enough to read it (the encyclical), but to say something has to be done and here is the plan," he said.

The launch originally was to occur Oct. 4, the feast of St. Francis of Assisi. However, dicastery officials decided to delay it for six weeks to allow for a period of prayer and for more time for church entities to determine whether to commit to a seven-year mission.

Salesian Father Joshtrom Kureethadam, coordinator of ecology and creation at the dicastery, said when the initiative was introduced that choosing the biblical time frame of seven years "enables us to work slowly but surely without being obsessed with immediate results."

The first year will be dedicated to building community, sharing resources and developing action plans for each Laudato Si' goal. Implementing the plans will follow for the next five years, followed by a year of sabbatical "to praise and thank God," Father Kureethadam said.

The Catholic Climate Covenant is coordinating the U.S. involvement with the global platform.

Executive director Jose Aguto said dozens of Catholic entities have committed to work toward achieving the initiative's goals. Its own initiative, called "We're All Part of God's Plan(et)," provides resources, ideas and a gathering place for those seeking to integrate Laudato Si' into daily life.

"The covenant wants to make available to interested institutions and individuals access to the people who are working in the respective communities and sectors to implement integral ecology in prayer, word and deed," he told CNS. "We seek to offer to U.S. faithful and institutions not just a website with resources to implement Laudato Si' but also hands-on expertise to help accompany them in doing so."

He said that in addition to San Diego, 16 other U.S. dioceses have developed plans before the platform launch. He expects others to follow.

The covenant also has distributed dozens of small grants to institutions to help them implement the platform. Funds were made available through a $50,000 gift from Our Lady of Victory Mission Sisters of Huntington, Indiana, and a matching amount from donors.

The university and college sector has 80 institutions worldwide onboard, said Michael Schuck, a professor of theology at Loyola University Chicago who is co-director of the International Jesuit Ecology Project.

Each school has committed to developing its own action plan, he said. Institutions are located in 25 countries including Australia, Benin, Columbia, India, France, Madagascar, Mexico, Nicaragua and the United States.

After the launch, the schools will be assembled into small groups from widely dispersed geographic areas. Schuck said they will then regularly meet online, allowing for the exchange of ideas with the chance to learn from each other.

"The journey," he said, "is about pushing and changing and incentivizing and moving ahead."