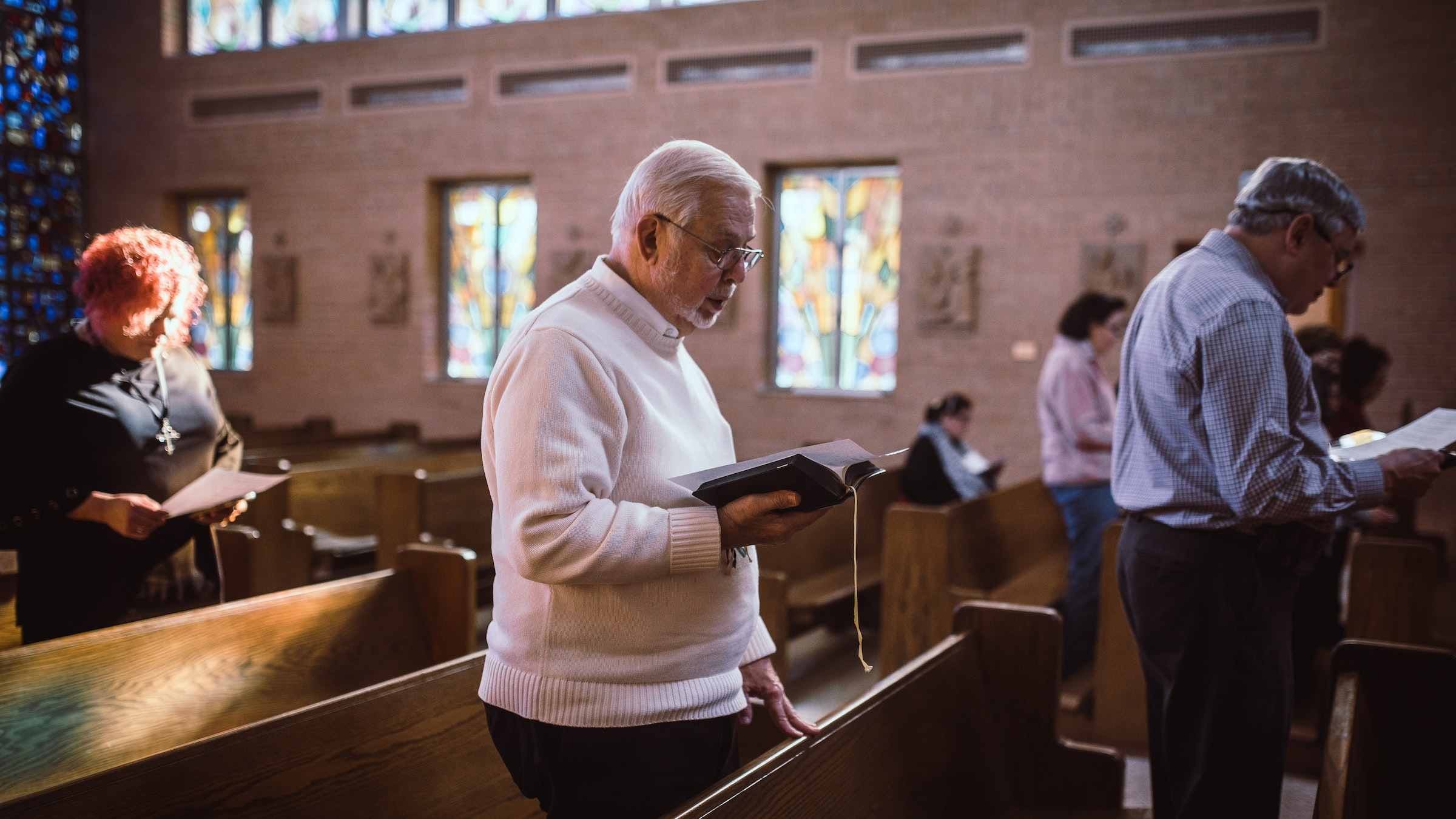 Ed Kolodziej prays with members of the Third Order of St. Dominic at the Monastery of the Blessed Sacrament in Farmington Hills on Jan. 13. Today, there are Lay Dominicans worldwide, including the 17 active members and additional praying members of the chapter that meets each month in the Archdiocese of Detroit. (Photos by Valaurian Waller | Special to Detroit Catholic)

This article is the second in a four-part series about lay spirituality and third orders in the Archdiocese of Detroit. To learn more about a particular charism, email the contact included in the story. See last week's article on the Benedictine Oblates here.

FARMINGTON HILLS — Many Catholics, when they hear the term “preacher,” think of an ordained minister at the pulpit. However, St. Dominic, the well-known saint and founder of the Order of Preachers, firmly believed that all Catholics are called to preach the Gospel.

Members of the Lay Dominicans (formally known as the Third Order of St. Dominic), including many in the Detroit area, are committed to following St. Dominic’s directive, namely, that, "we must sow the seed, not hoard it." Lay Dominicans are men and women, both married and single, who are living ordinary lives — with or without spouses, children or jobs, but with an emphasis on Dominican spirituality, focused on study of the Gospel and preaching it to the world.

The Lay Dominicans are among the oldest of the Third Orders — associations of lay people who live according to the spirit of a specific religious order. St. Dominic founded the Lay Dominicans in 1285. Today, there are Lay Dominicans worldwide, including the 17 active members and additional praying members of the chapter that meets each month at the Monastery of the Blessed Sacrament in Farmington Hills.

Dr. David McDonald is one of them. He has been a Lay Dominican for about six years. Although he lives near the monastery, he never considered joining the order until he was personally invited to do so.

“I was spending time in the chapel and then browsing through the bookstore there,” Dr. McDonald said. “There was a fellow outside the chapel and we struck up a conversation.”

That fellow was Fr. David Santoro, a Dominican priest. During the course of their conversation, Fr. Santoro told Dr. McDonald, “You would make a good Lay Dominican,” and gave him the contact information for the chapter. Dr. McDonald followed through and has been a member of the chapter ever since.

The Lay Dominican formation process is similar to those of other Third Orders: There is a six-month inquiry period in which a candidate learns the basics of Lay Dominican life and spirituality. If the candidate chooses to continue, he or she must submit two letters of recommendation and the application is voted on by the chapter’s leaders. If approved, the person becomes an initiate, going deeper into the formation process for another six months. At that point, the person makes a temporary promise for two to three years before making a lifelong commitment.

As a sign of their commitment, Lay Dominicans wear a white scapular, a reminder of the white habit worn by Dominican priests and sisters.

The promises are meant to be taken seriously, Dr. McDonald added. “This is not a club,” he said.

Prayer and liturgy: Especially praying the daily morning and evening prayer from the Liturgy of the Hours and receiving the Eucharist daily if possible. Dominicans also have a strong devotion to Our Lady and the rosary.

Study: Especially of the Gospels and the lives of Dominican saints, such as St. Catherine of Siena and St. Dominic.

Discipline: Including personal penance, simplicity of life, and charity to others.

Apostolate: Witnessing publicly to the faith.

“One of our unique requirements is to preach to the community,” Dr. McDonald said, adding that the preaching is usually centered on that day’s Gospel. “We are, after all, the Order of Preachers.”

While some might be intimidated at the thought of preaching, Dr. McDonald said, “Everybody has a way of spreading the Gospel.”

Dr. McDonald, for example, is a chaplain at St. Mary Mercy Hospital in Livonia. His apostolate does not end, however, when he exits the hospital doors.

“I tell patients, ‘I am a chaplain and I am here to give you Jesus,’” Dr. McDonald said. “But no matter where I go, I spread the Gospel. I tell the cashier, ‘I have some wonderful news: Jesus loves you.’ I’ve never gotten anything but a positive response.”

One of the hallmarks of Dominican spirituality is a sense of joy. Dr. McDonald said that joy is apparent at chapter meetings, and it is essential for members to spread that joy to others.

“We all have the same purpose,” he said, “to spread the Gospel in a world that is hungry for Jesus. When we leave our meetings, we are entering the largest mission field in the world.”

Lay Dominicans meet on the second Sunday of each month from 1 to 5 p.m. at the Monastery of the Blessed Sacrament, 29575 Middlebelt Road, Farmington Hills. or more information, call the monastery at (248) 626-8253.