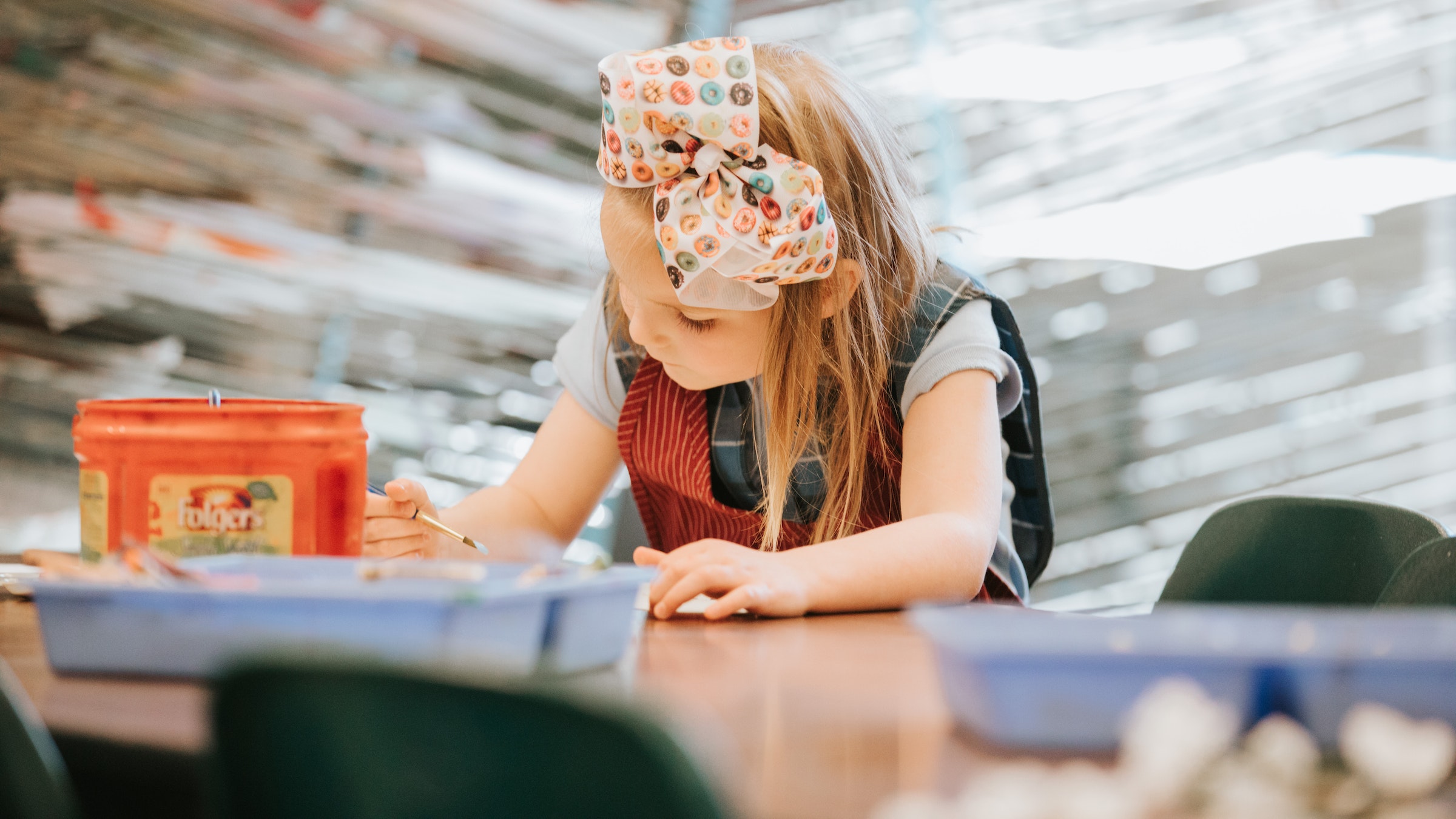 A young student works on her art project during class at John Paul II School in Lincoln Park on May 15. In the fall, John Paul II School will transition into the Archdiocese of Detroit's first classical school, with a greater emphasis on critical thinking skills, Mass and the sacraments, and a focus on grammar, logic and rhetoric. (Photos by Naomi Vrazo | Detroit Catholic)

LINCOLN PARK — Starting next year, third-graders at John Paul II Catholic School will be learning multiplication and phonics alongside Aristotle and Aquinas.

This fall, the Lincoln Park Catholic school, located next to Christ the Good Shepherd Parish, will transition into the Archdiocese of Detroit’s first classical school — John Paul II Classical School — centered on teaching a Catholic curriculum focused on universal truths with an emphasis on grammar, logic and rhetoric.

The transition is part of the Archdiocese of Detroit’s “Unleashing Our Catholic Schools” vision, in which Detroit Archbishop Allen H. Vigneron has asked all archdiocesan schools to undergo a “missionary conversion” to be “proudly Catholic, academically excellent, accessible to all and sustainable for the future.”

Teachers and the school’s principal, Marianne Lupinacci-Kosinski, will be retained next year for the first year of the “new school,” which will be the first to offer a classical model of education in the archdiocese, said Kevin Kijewski, superintendent of Catholic schools for the Archdiocese of Detroit.

“Classical education is the study of the trivium: grammar, logic and rhetoric; as a way of making sure we develop the whole child,” Kijewski told Detroit Catholic. “It looks at the various ways of educating a child through the study of Latin, poetry, music, art and drama, looking at the great thinkers of the past in ancient Greece and Rome, and equipping students in a way to deal with secular society so they are able to be joyful, missionary disciples.”

Tuition will remain the same at John Paul II, as will the school’s uniform policy, and current John Paul II students have a guaranteed place at the school. What will change is the way the current curriculum is taught, along with a greater emphasis on critical thinking skills and better incorporation of Catholic elements into all parts of the core curriculum.

“As a classical school, it is going to give us the opportunity to change not only what we teach, but how we teach the subjects,” Lupinacci-Kosinski said. “We want to focus not necessarily on measuring students by grading, but by the way they actually comprehend the material.”

Greater emphasis on the Mass, sacraments

Among the most noticeable changes will be increase in the number of school Masses to four per week, and a greater emphasis on learning results and less emphasis on standardized tests.

“We’re finding we have children in high school and college now who have severe anxiety and depression with all this focus on learning to score high on a test, and they don’t have the ability to think critically,” Lupinacci-Kosinski said.

John Paul II Classical School will seek to instill strong faith values in students from a young age, Lupinacci-Kosinski said, “that way, when they go out as young adults to college, they will still have their faith as a backbone as they take on greater academic challenges.”

John Paul II will be a parochial school connected to Christ the Good Shepherd Parish with a lay-led form of governance the School Administrative Oversight Board. The board will be responsible for overseeing the school’s principal, managing finances and directing strategic priorities.

Fr. David Bechill, administrator of the Christ the Good Shepherd, will serve on the board as the pastor delegate, ensuring the school’s Catholic identity is maintained.

“My responsibility will be for maintaining and promoting the school’s Catholic identity and mission, which will include celebrating Mass, spiritual direction for teachers and the principal and being sacramentally available for the students,” Fr. Bechill said.

Fr. Bechill said he would no longer be involved in discussions about the day-to-day running of the school, which will give him more time to celebrate Mass, offer Eucharistic adoration and hear confession from students.

The changes are meant to transform the culture at John Paul II that begins and ends with Christ.

With students going to Mass four times a week instead of once, there is a concern that children will not be in the classroom as much, Fr. Bechill said, but starting the day with Mass allows students to reflect on what's truly important.

“In a lot of schools, there is an inordinate amount of time of just throwing (lessons) at kids,” Fr. Bechill said. “This is an opportunity to begin the day with Christ. In our school, religion will be integral in what we do every day, with us starting every day in church with prayer.

“When you look at the word ‘culture,’ those first four letters, ‘cult,’ it looks at what you worship,” Fr. Bechill said. “We are simply putting our students in contact with the things that matter the most, giving children a vocabulary to talk about the world, to talk about Christ and his Church. This is not about burying our heads into the sand. It is really about helping our people connect the dots.”

Recent trends in education have called for schools to devote more time to STEM fields — science, technology, engineering and math — or second-language immersion, but Kijewski said across the country there has been a growing call from parents for more classical-style models of education focused on the humanities.

When Kijewski was superintendent of schools in the Archdiocese of Denver, Our Lady of Lourdes Classical School there had an enrollment just under 100 when it transitioned into a classical school 10 years ago. Today, the school has an enrollment above 300 and a waiting list.

Seeing that success, the Archdiocese of Denver then bought a charter school to turn it into Frassati Catholic Academy, which attracted similar interest.

The interesting part about the enrollment at Frassati, Kijewski said, is that it primarily came from public and homeschooling families, rather than transfers from other Catholic schools. Frassati drew 10 percent of its student body from existing Catholic schools, 40 percent from existing public and charter schools and 50 percent of its student body from homeschooling families, Kijewski said.

“The vision behind establishing classical education is to capture families who choose public schooling or homeschooling in the area right now who are looking for this type of education,” Kijewski said. “When we started Frassati Catholic Academy back in Colorado, (Denver) Archbishop (Samuel) Aquila and I saw that very few people were coming to the school from existing Catholic schools. Instead, we had a lot of public schooling families, and a lot of homeschooling families who saw the education we were providing mirrored what they were doing.”

Kijewski said the classical school model is one of many options that are part of Archbishop Vigneron’s vision for Catholic schools in the Archdiocese of Detroit. Other models include schools taking a greater focus on STEM education or becoming dual-language immersion schools.

Besides John Paul II Classical School, Kijewski said another five to eight Catholic schools in the archdiocese have expressed an interest in making the transition to a classical education.

“Parents are finding classical education valuable because, number one, children are able to study Latin at such an early age,” Kijewski said. “The study of Latin teaches a cadence and structure to language very early. When it comes to French, Italian, Spanish, those romance languages come from Latin — from Rome.”

In an educational environment that pushes careers in STEM and college readiness, Kijewski doesn’t see classical education as “countercultural” or the polar opposite of STEM-focused education — the Archdiocese of Detroit also hosted a STEM-focused workshop on May 10 for interested schools — but rather another option for parents to consider when making a choice for their children.

“It is countercultural in that we are studying knowledge for knowledge’s sake,” Kijewski said. “Frankly, when we look at children today, there is a massive amount of test prep that is done. Children need to learn, but they also need to think. Career readiness is important, but that can come later, and it doesn’t have to be the primary focus.”

Changing John Paul II’s curriculum has created excitement in the school community, Lupinacci-Kosinski said, with teachers saying they are excited to learn more during a teacher service day May 16.

“As Catholic school educators, all we do is based on teaching the Catholic faith, and that's what excites me the most: when I see and know that we helped change the lives of these children,” Lupinacci-Kosinski said. “We will have an opportunity to go to reconciliation every day, to get that clean slate every day. When they know they are loved by God, that they are forgiven by God, these students flourish, and that is exciting to see.”

“As Catholic school educators, all we do is based on teaching the Catholic faith, and that's what excites me the most: when I see and know that we helped change the lives of these children,” Lupinacci-Kosinski said. “We will have an opportunity to go to reconciliation every day, to get that clean slate every day. When they know they are loved by God, that they are forgiven by God, these students flourish, and that is exciting to see.”

Kijewski said parents, too, are excited about the change, adding the Lincoln Park school's proximity to Interstate 75 means the school will be accessible to parents in other communities who are interested in giving their child a classical education.

“Lincoln Park is a wonderful bedroom community here in suburban Detroit,” Kijewski said. “The model of education we are bringing here is nothing this area has ever seen. Traditionally, classical schools are in more well-to-do, more affluent communities. We could have started somewhere else in Oakland or northern Macomb counties, but we really thought we about who would benefit the most.

“The parents we met were the most salt-of-the-earth people,” Kijewski continued. “Many said how they wished they had this when they were younger, and how they want their child to have this education. One parent was saying, ‘Will this education rival Cranbrook?’ And I said, ‘Yes it can.’ To think what we have here, at John Paul II, and other Catholic schools, with Christ as our center, Christ as our leader. It's about getting children into heaven first and Harvard second. John Paul II will be the first classical school in our archdiocese with other possibilities in the future.”