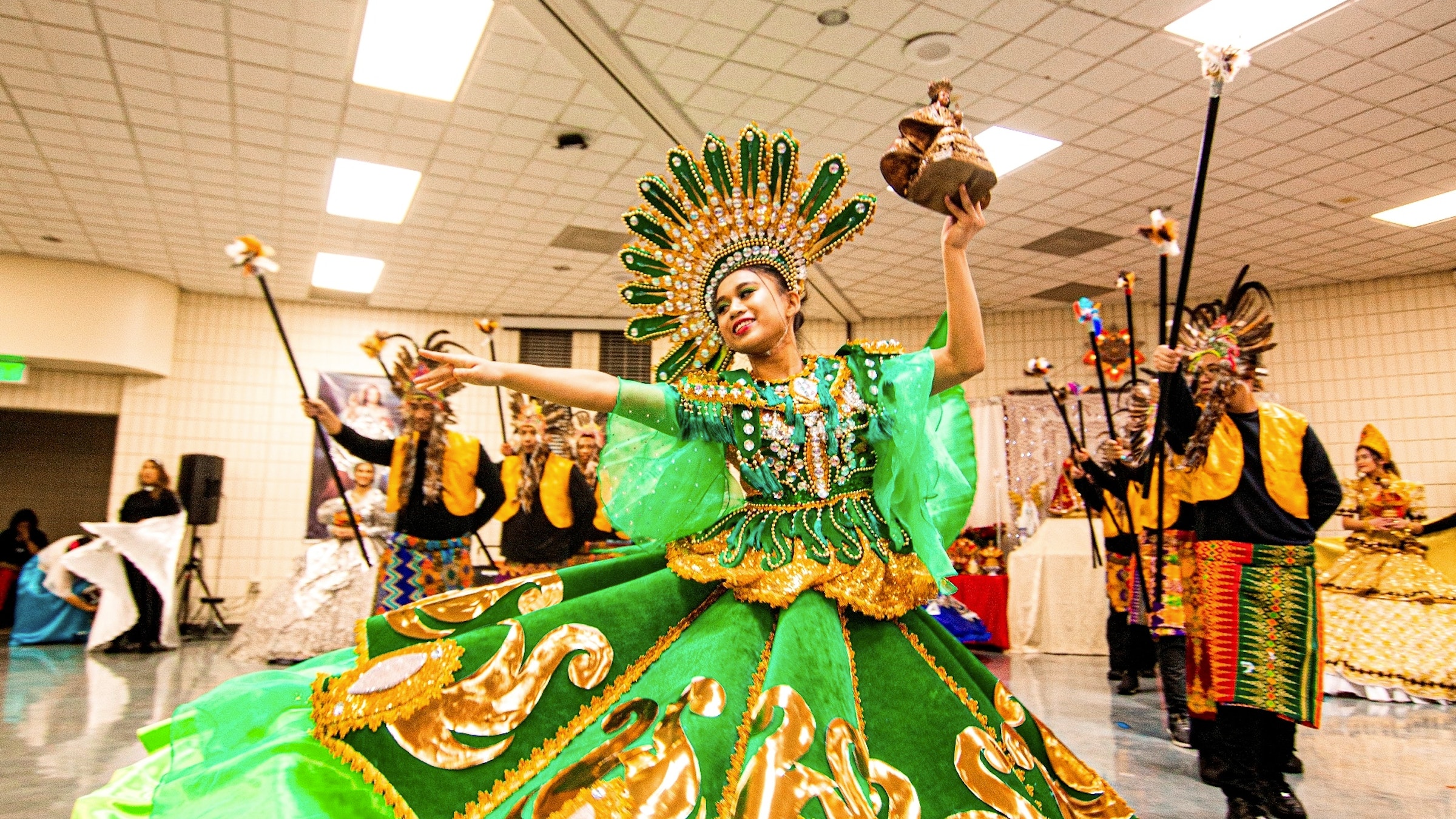 Dancers known as Sinulog queens lead a traditional Filipino dance during a celebration of the Feast of Santo Niño at St. Rene Goupil Parish in Sterling Heights on Jan. 11. The nearly 500-year-old Filipino cultural celebration marks the introduction of the image of the Christ Child to the Philippines in 1521. (Photos by James Silvestri | Detroit Catholic)

STERLING HEIGHTS — Almost 500 years ago, on the island of Cebú in the Philippines, a small wooden statue of a round-cheeked, yet regal infant Jesus began an influential cultural reign far greater than its small stature.

Gifted to Queen Juana in 1521 by Portuguese explorer Ferdinand Magellan on the occasion of her baptism, the statue was rediscovered 44 years later, having survived a fire that burned down Cebú.

In the centuries since, the image of Santo Niño de Cebú (Holy Child of Cebú) has been purported to be miraculous in nature and responsible for marvels ranging from healing the sick to causing infertile women to become pregnant. The statue survives today and is kept in the Basilica del Santo Niño in the Philippines. To this day, Filipino households around the world have their own replicas and continue to venerate the child year-round.

Every year on the third Sunday of January, roughly 1 to 2 million Filipinos congregate in Cebú for the celebration of the Feast of Santo Niño. Although not a liturgical feast on the Church's calendar, the cultural celebration is a time to commemorate the history and faith of the Filipino people.

A fraction of the highly popular Cebú celebration, the tight-knit Filipino community of southeast Michigan gathers together in much the same way, to pay homage and celebrate their Catholic Filipino culture and history.

On this year's festival, Jan. 11, more than 500 local Filipinos gathered at St. Rene Goupil Parish in Sterling Heights, beginning in the sanctuary for an evening of veneration and celebration. Families brought their personal statues of the Christ Child and placed them on the steps leading up to the altar, creating a sea of Santo Niños staring out at the congregation.

The festival began with a rosary, novena, Mass, and then the centuries-old tradition of the Sinulog — the dance for Santo Niño performed by the Sinulog queens wearing traditional Filipino garb, who represent Queen Juana and dance with the replica of Santo Niño in their arms.

Other Santo Niño celebrations around the Archdiocese of Detroit incorporated elements of the traditional festival, including one at St. Mary, Cause of Our Joy Parish in Westland.

For Filipinos around the world, the feast of Santo Niño and the Sinulog are where culture and faith collide, and it’s how they continue to introduce these aspects of home and tradition to their younger generations.

“The younger generation is looking at themselves and their identity and asking what their relevance as a Filipino (is) as U.S. citizens,” Suan said. “What is their relevance in the great conversation?”

Despite the generational divides, the festival of Santo Niño unites the Catholic Filipino community, and there is a part for everyone to play in making the celebration to honor the Christ Child as special and joyous as possible.

“We do all of this to bring our Filipino youth born here to really appreciate what we have back home. We infuse the culture as well as our Catholic faith,” said Tess Pascua, the organizer for the 2020 Sinulog at St. Rene Goupil as well as the head of the Kapulungan ng mga Katolikong Pilipino sa Michigan, a group that serves Catholic Filipinos in Michigan.

Pascua grew up in Cebú and remembers celebrating Santo Niño as a young girl.

“Normally, all the streets are packed. It’s so festive and there are a lot of tourists coming in. Before it was just us dancing in the streets, waving our Santo Niño. And that’s how we pay homage. And then we have the nine nights of novena,” Pascua said.

Pascua is also a leader in a Santo Niño devotion group that prays together weekly and venerates the Santo Niño image throughout the year.

Pascua and other leaders in the Michigan Filipino community are fervently trying to share their rich Filipino-Catholic culture with first-generation Filipino Americans. While the tradition of celebrating feasts and treating prayer with joy is rooted within her, Pascua observed the younger generations are not having the same experiences she had growing up.

“These kids are not having that experience that we had back home,” Pascua said. “There are so many things here in the U.S. (that) you tend to forget the faith you had back home.”

GariAnn Cadelina, a 20-year-old college student at the University of Detroit Mercy, has been participating in the Sinulog since she was 8 years old, and this year, for the first time, she was chosen as the reigning Sinulog queen. Cadelina’s experience of Filipino culture is different from her mother and father’s, who both grew up in the Philippines, but she values the many religious celebrations in the Filipino community and the lessons they offer for both her faith and her cultural heritage.

“I see the importance of doing this and participating in this not only as a prayer to God and as a way of praise and worship to Him,” Cadelina said. “It sets me apart from other kids that I grew up with because not only am I doing something for God, it’s embracing the Filipino culture, and I am very proud to be Filipino American.”

And there is hope that these cultural and faith traditions will continue for years to come, through Cadelina’s generation and onward.

“I’ve been with Santo Niño for so many years and I’ve been blessed,” Pascua said.

And even though it is not really tangible, she can feel the light, blessing and joy in venerating his presence through these deeply rooted traditions.