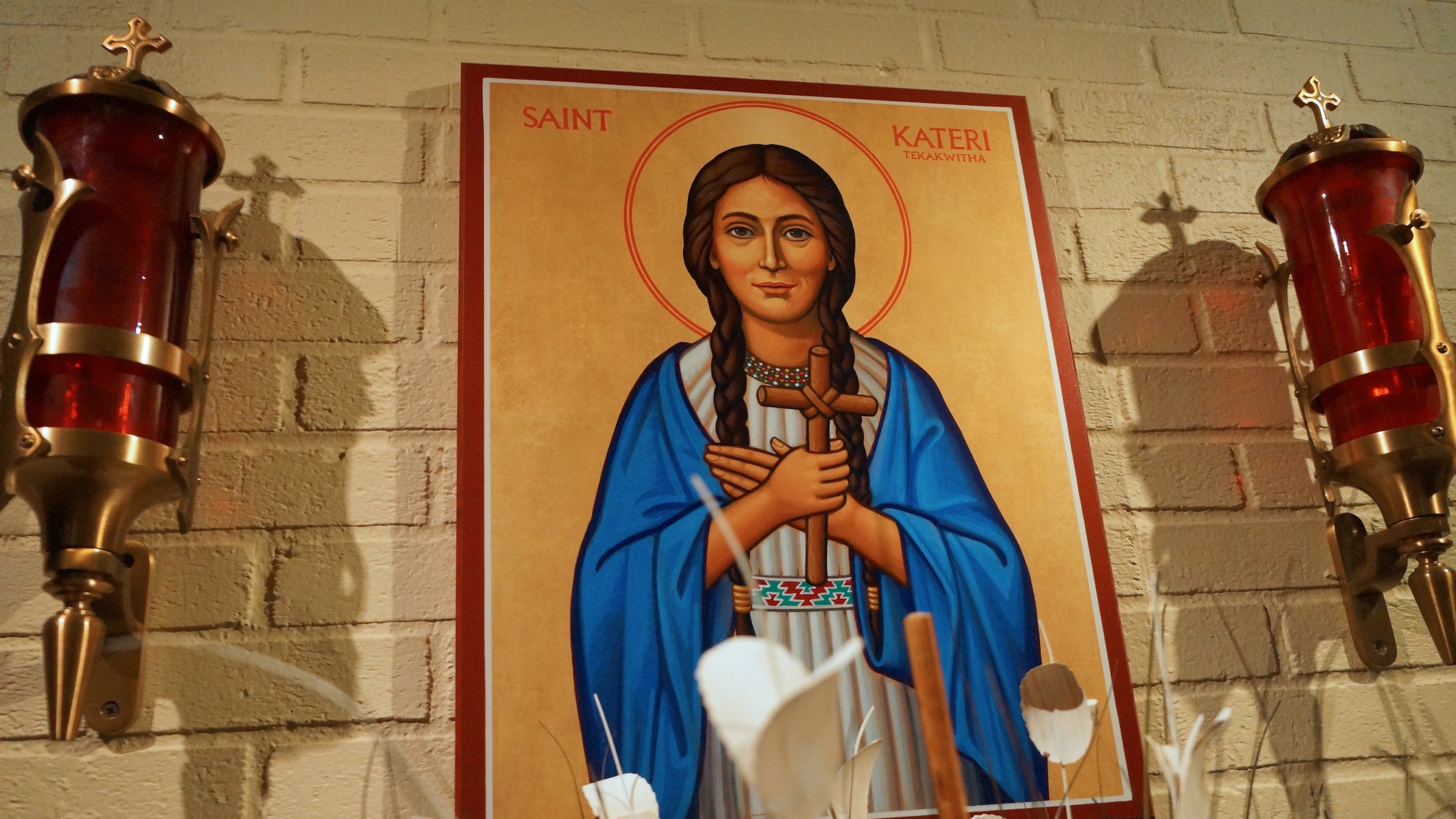 An icon of St. Kateri Tekakwitha, the first Native American saint in the Church's history, hangs on the wall at St. Kateri Tekakwitha Parish in Dearborn. The Servant of God Nicholas Black Elk Kateri Circle meets monthly at the parish to support Native American Catholic spirituality and to promote awareness of indigenous saints and sainthood candidates. (Janet Sugameli Biondo | Special to Detroit Catholic)

Group seeks to raise awareness of Servant of God Nicholas Black Elk, a Lakota medicine man and catechist on road to sainthood

DEARBORN — For many Native American Catholics living in Metro Detroit, it hasn't always been easy to find spiritual support that aligns with both who they are as Catholics and as Native Americans.

With the recent revival of a local “Kateri Circle,” local Native American Catholics hope their faith, culture and spirituality will be recognized and shared.

Kateri Circles, which are organized throughout the United States, highlight the diversity in the Catholic Church and uniqueness of Native American cultural traditions and spirituality, according to Julienne Montour, a Mohawk who belongs to the Servant of God Nicholas Black Elk Kateri Circle at St. Kateri Tekakwitha Parish in Dearborn.

“The resurrection of this group is an understanding of the importance of the first circle,” Montour told Detroit Catholic. “It allows us to network with other Catholic Indians.”

Often, Native American Catholics have felt isolated from the Church, she explained.

“To have a group with Native Americans and non-Native Americans, it makes people more aware,” Montour added. “It educates people, and those people can reach out to the Church and see that the Church is multicultural and that everyone’s culture must be celebrated.”

The Nicholas Black Elk Kateri Circle, which meets every second Wednesday of the month at St. Kateri Parish, is affiliated with the National Kateri Tekakwitha Conference, a religious nonprofit that advocates for evangelization among the indigenous Catholics of North America, according to the organization’s website. The model for the “circle” is St. Kateri Tekakwitha, who was the first indigenous woman of North America to be canonized in 2012.

The local group of 6-8 people, which began meeting in February after a hiatus of more than seven years, is sponsored by the Native American Ministry of the Archdiocese of Detroit. The group has adopted the additional name of Servant of God Nicholas Black Elk, whose cause for canonization was opened in 2017.

In order to help further his cause, the circle hopes to use the group as a means for praying for his sainthood while gathering and sharing cultural experiences. Recently, the group watched a short movie on the life of Black Elk, and then discussed what the plans for the future of the group hold.

Black Elk, who died in 1950, was a Lakota who converted to Catholicism around the turn of the century, when he was in his 40s. Black Elk lived in present-day South Dakota and was the second cousin of war leader Crazy Horse.

A catechist, Black Elk became responsible for the conversion of thousands of people, explained Fr. Gary Wright, pastor of SS. Peter and Paul (Jesuit) Parish in Detroit. Fr. Wright spent time in the Jesuit community in South Dakota on the Pine Ridge Indian Reservation; the Jesuits have a longstanding relationship with Native Americans.

“What makes him a fascinating figure is that he was living in two religious communities at the same time,” Fr. Wright said of Black Elk, who was known as both a medicine man and a catechist. “He didn’t disavow his Native American culture and religion. He developed a synthesis of the two. He bridged the two cultures and the two religions.”

Fr. Wright said Black Elk's example can be modeled in the “poly-cultural reality” of today.

“He’s a wonderful figure for our times and provides a rich study of our times,” Fr. Wright said.

The rebirth of the local Kateri Circle is exciting, Fr. Wright added, because there has not been an organized Native American Catholic community for a number of years.

“I’m delighted that something new is beginning for our Native Americans here,” Fr. Wright said.

The former circle was meeting regularly before St. Kateri's canonization, a cause for which was a big focus for the group. Now, the group’s focus has shifted to praying for Black Elk to take the same path.

“When he died, he had his pipe at his side and a rosary in his hand,” said Fr. Charles Morris, pastor of St Mary of Redford Parish, who serves as a spiritual director for the local Kateri Circle.

Fr. Morris is passionate about the need to celebrate Native American Catholic ministry, and even had a special vestment commissioned to be used for Native American funerals and special Masses.

“You see God working and appreciate him through all cultures,” said Urban, who is not Native American.

Donna Storie, a member of the First Nations people who attends Corpus Christi Parish in Detroit, said she is looking forward to seeing the fruits of the circle.

“I love Mass, but I miss the cultural part of being a Catholic Native American, and I want to intertwine the two,” Storie said.

Storie added maintaining cultural outlets like the Kateri Circle is especially important for Native Americans who do not live on reservations but still want to practice their cultural and spiritual traditions.