Meet the four men who will become the Archdiocese of Detroit's newest deacons Oct. 5 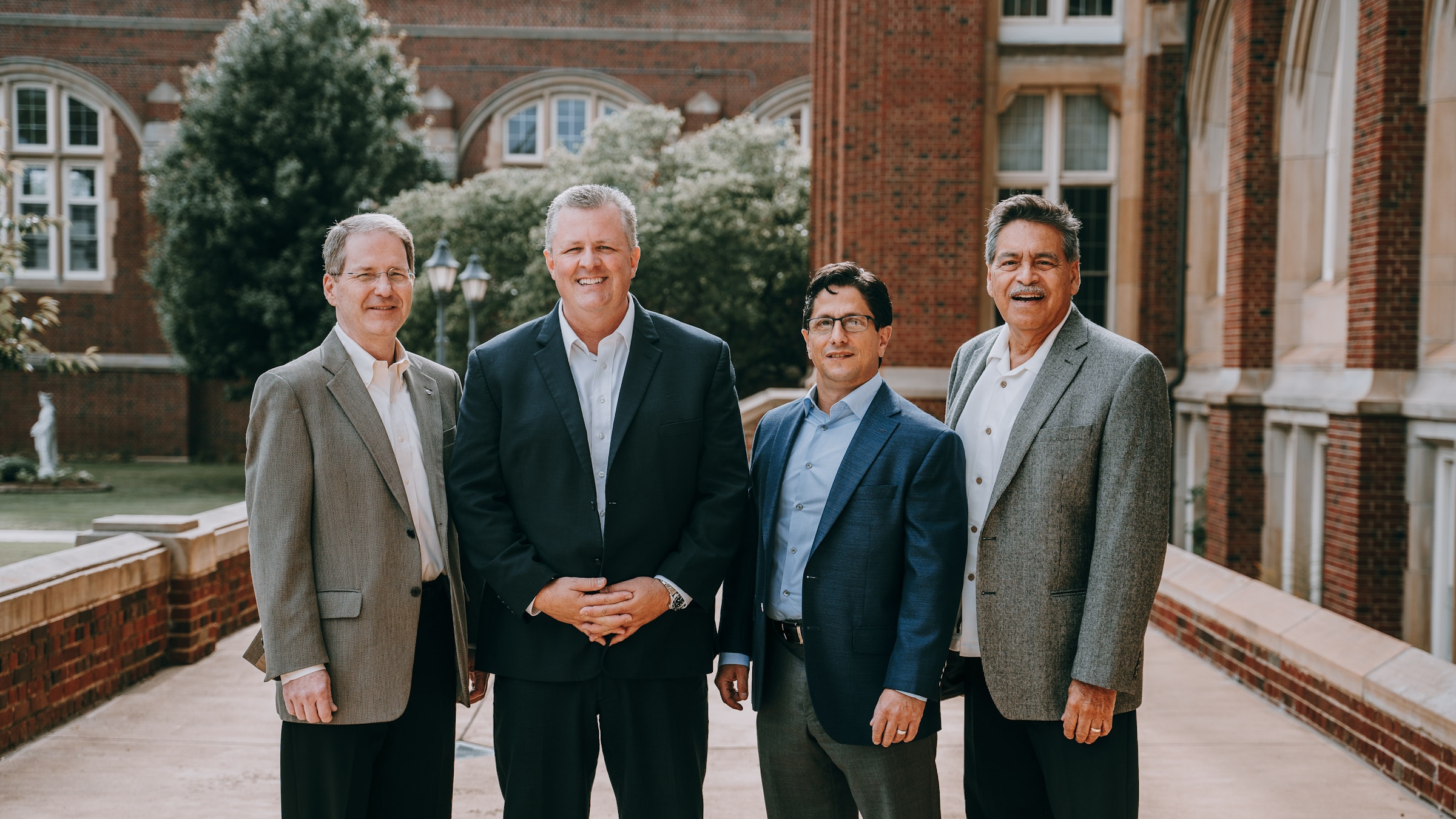 From left to right, J. Michael Van Dyke, Aaron Poyer, Fred Billotto and Alfredo Guardiola Jr. will be ordained permanent deacons for the Archdiocese of Detroit on Oct. 5 at the Cathedral of the Most Blessed Sacrament. The four men have spent years in formation at Sacred Heart Major Seminary in preparation for service at God's altar. (Valaurian Waller | Detroit Catholic)

Fred Billotto, Alfredo Guardiola Jr., Aaron Poyer and J. Michael Van Dyke describe what led them to pursue a vocation at the altar

DETROIT — Four men will be called to serve at the altar at 10 a.m. Saturday, Oct. 5, when Archbishop Allen H. Vigneron will ordain them to be permanent deacons for the Archdiocese of Detroit at the Cathedral of the Most Blessed Sacrament.

Fred Billotto, Alfredo Guardiola Jr., Aaron Poyer and J. Michael Van Dyke have completed years of discernment, study and prayer at Sacred Heart Major Seminary and are in the final phases of preparation to be servants of the Mass and proclaimers of the Gospel of Jesus Christ.

The four men come from a variety of backgrounds, but all have answered the Lord’s call to serve His Church and minister to His people.

Fred Billotto, 55, of Livonia, is a parishioner of St. Edith in Livonia. He is married to Serena (Capace) and the couple have five children: Daniel, Robert, Jenna, Lauren and Joseph; and five grandchildren: Jack, Anthony, Josie, Carina and Leo.

Billotto was born in Detroit and attended St. Andrew High School in Detroit before graduating from the University of Detroit Mercy with a bachelor of science in mechanical engineering in 2003. An engineering program manager and product development engineer at Livonia-based Grakon, an automotive lighting manufacturer, Billotto is on track to finish his master's in pastoral studies at Sacred Heart Major Seminary in 2020.

“Similar to the way Cleopas and his companion describe their encounter with Jesus on the road to Emmaus, my heart would burn with a desire to commit to serving the Lord when moved by prayer, reading sacred Scripture, an inspirational homily and spiritual reading.”

“The call to the diaconate first manifested itself in my late 20s as a desire to make a more radical commitment to Christian discipleship,” Billotto said. “Similar to the way Cleopas and his companion describe their encounter with Jesus on the road to Emmaus, my heart would burn with a desire to commit to serving the Lord when moved by prayer, reading sacred Scripture, an inspirational homily and spiritual reading.

“This moved the thought of serving the Church as a deacon in my mind, and that spiritual movement led me to the diaconate formation program,” Billotto continued.

Billotto completed his diaconate internship at St. Thomas a’Becket Parish in Canton under Fr. Chris Maus and Deacon James Ward, with experience in prison ministry at the Women’s Huron Valley Correctional Facility in Ypsilanti, as a volunteer chaplain at Detroit Receiving and Harper hospitals, and with Manna Meals in Detroit.

Billotto's wife, Serena, recently completed the spiritual direction internship program at St. Paul of the Cross Retreat Center in Detroit and currently serves as a spiritual director. She also teaches catechism at St. Edith and previously served with Fred a marriage preparation facilitator.

“The life and ministry of a deacon, and his wife, must spring forth from an authentic relationship with Jesus Christ,” Billotto said, “a relationship that is open and responsive to the guidance of the Holy Spirit, where the deacon must humbly serve the people of God wherever he is called, teaching and exemplifying the Gospel message within the community he serves.”

Alfredo Guardiola Jr., 67, who lives in Allen Park and is a member of St. Frances Cabrini Parish there, is married to Peggy (Dasher), and the couple have three children: Andrew, Joseph and Kathryn.

Guardiola was born in Laredo, Texas, before the family moved to Michigan. After graduating from Melvindale High School, Guardiola earned a bachelor’s degree in biology from Wayne State University in 1979 and a master’s in public administration from the University of Michigan in 1991.

A retired director of the Environmental Health Division of the Wayne County Health Department, Guardiola competed his diaconate internship at St. Cyprian Parish in Riverview with Fr. William Promesso and Deacon Jim Nicola.

Guardiola said he once heard a homily that inspired him to further explore the diaconate.

“The priest was pointing out a sanctuary mural of Jesus wearing a deacon’s stole, symbolizing His ministry as that of a servant. I never forgot that reference, and when I heard about the diaconate years later, I was drawn to finding out what it was all about.”

“The priest was pointing out a sanctuary mural of Jesus wearing a deacon’s stole, symbolizing His ministry as that of a servant,” Guardiola said. “I never forgot that reference, and when I heard about the diaconate years later, I was drawn to finding out what it was all about.”

Guardiola said friends and acquaintances began to suggest that he should consider the diaconate and mentioned a diaconate information night at the seminary.

“Soon after, I began taking classes at Sacred Heart Major Seminary just before I retired, which brought me to the program,” Guardiola said. “It has been quite a challenge in seeking God’s will in how I will spend the rest of my life in service for others.”

Guardiola recounts being attracted to service at a young age, whether it was as an altar server, cutting lawns or delivering newspapers.

“It was a natural progression for me to help others, but now it has become providing assistance for the poor, the infirm, those in hospitals and those in prison,” Guardiola said. “Carrying the Gospel of Christ to those in the street or in the pew, serving as Jesus did, is unbelievably rewarding.”

Aaron Poyer, 52, of Farmington Hills and a parishioner of Our Lady of Good Counsel in Plymouth, is married to Julie (Grundy), and the couple have four children: Allison (Nicholas Goodrich), Kelsey, Aaron and Kaitlin.

Poyer was born in Saginaw and attended St. Lawrence Seminary High School in Mount Calvary, Wis., before earning a degree in criminal justice from Wayne State University in 1990. He is expected to earn is masters's in pastoral studies from Sacred Heart in 2020.

Poyer is in law enforcement and completed his internship at St. John Neumann Parish in Canton under Fr. Michael Suhy and Deacon Patrick Conlen, earning field experience at Angels’ Place, the Detroit Medical Center chaplaincy and the Pope Francis Center. Poyer is also a member of the Knights of Columbus.

“After several years of wondering if I was called to being a deacon, and several years of not directly responding, a priest challenged me and called me to account for ignoring what I thought might be a call from God despite the fact I didn’t feel prepared to be a deacon,” Poyer said. “My wife, Julie, was immensely supportive and has felt for a number of years that I was being called to serving in this way.”

“There are many in our society who are neglected and in need. The role of deacons and laity alike is to bring the good news of Jesus Christ to a world which desperately needs it.”

Poyer admits the coursework at Sacred Heart Major Seminary is a big time commitment, but though the support of family and friends, he discerned that this is what he was called to do.

“Jesus’ assurance, ‘My yoke is easy and my burden light,’ is the best way to describe our experience of formation,” Poyer said. “If we had any doubts when we entered formation, they were quickly eliminated by the consistently positive experiences we have enjoyed. Countless people have assured us of their prayers from the time we entered formation, and these prayer are, most assuredly, a major reason why formation has been such a joy.”

Poyer’s wife, Julie, has been involved with parish life, including vacation Bible school and the Christian Service Commission, Pen Friend Prison Ministry, Servants of Mercy and No One Dies Alone, a support program of St. Mary Mercy Hospital in Livonia.

Poyer points to the sixth chapter of the Acts of the Apostles as a source of inspiration for his vision of the diaconate.

“Seven men were called from the community to serve those who were in need and being neglected,” Poyer said. “There are many in our society who are neglected and in need. The role of deacons and laity alike is to bring the good news of Jesus Christ to a world which desperately needs it. A deacon’s charity toward all of God’s people, particularly the least among us, and our genuine concern for their temporal and spiritual needs, is a way to lead them and others to Jesus.”

Van Dyke is a third-degree knight with the Knights of Columbus' St. Fabian Council 13362 and is a certified project management professional with the Project Management Institute.

“While praying for priestly vocations during a time when the Archdiocese of Detroit had parishes working on cluster plans, I heard, ‘What about you?’ I inquired into the diaconate, but said it wasn’t for me. But my wife saw something in me, telling me to ‘follow my heart,’ which is where God resides, in my heart, who was indeed calling me to the diaconate.”

“While praying for priestly vocations during a time when the Archdiocese of Detroit had parishes working on cluster plans, I heard, ‘What about you?’” Van Dyke said. “I inquired into the diaconate, but said it wasn’t for me. But my wife saw something in me, telling me to ‘follow my heart,’ which is where God resides, in my heart, who was indeed calling me to the diaconate.”

Van Dyke said his vision of ministry changed during his formation. No longer did he view ministry as what he bring to the Church, but rather an opportunity to give himself over to Jesus.

“I now recognize this ministry, as to paraphrase Deacon James Keating from his book The Heart of the Diaconate, (is about) giving myself over to allow Jesus to live His servant mysteries over again through me,” Van Dyke said. “This openness, I suspect, will lead me to ministry after ordination that I could never have imagined on my own, nor could fulfill without our Lord guiding me.”

Van Dyke’s wife, Juanita, works at Sacred Heart Major Seminary after coming into the Church in 2008. In the past, she was a foster puppy raiser for Paws With a Cause and a volunteer coordinator for the Michigan Humane Society.

During his time ministering at the St. Vincent de Paul Justice Initiative, Van Dyke recalls a time he came across a gentleman with the same name as him who left a profound impact on his discernment for the diaconate.

“I was assisting a gentleman, also named Mike, who was confined to a wheelchair,” Van Dyke said. “Long story short, Mike came in off the streets. I assisted him with new clothes and getting cleaned up. As I related this story during a class, I described how I saw an imprisoned Jesus, in a wheelchair, in the other Mike. The instructor said he saw in me the servant Jesus, who washed His disciples’ feet.”

An earlier version of this article misidentified the four men. Detroit Catholic apologizes for the error.