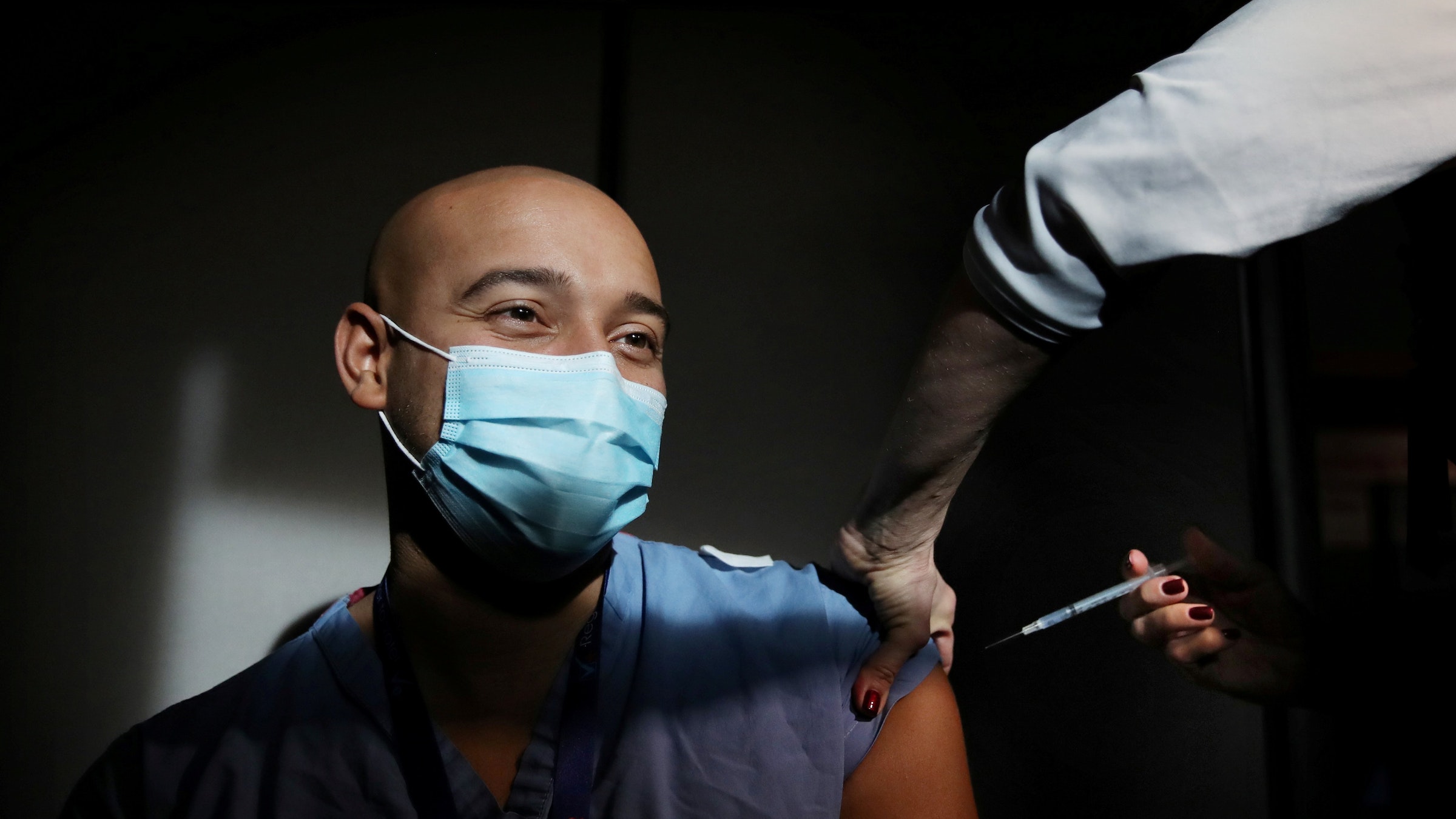 Physician Alister Martin receives one of the first doses of the Pfizer/BioNTech COVID-19 vaccine at Massachusetts General Hospital in Boston Dec. 16, 2020. Michigan’s bishops have said the vaccines developed by Pfizer/BioNTech and Moderna are morally permissible, while AstraZeneca’s vaccine, which has yet to receive FDA approval, is “morally problematic” because of its close connection to cell lines derived from abortion. (CNS photo/Craig F. Walker, Pool via Reuters)

A third candidate, AstraZeneca’s, is ‘morally problematic’ because of its close connection to cell lines derived from aborted baby, bishops say

LANSING — It is morally permissible for Catholics in Michigan to receive the coronavirus vaccines developed by Pfizer/BioNTech and Moderna, the state’s seven Catholic bishops said Dec. 18 in a joint statement addressing ethical questions surrounding the vaccines’ development.

However, a third vaccine candidate developed by AstraZeneca, which has not yet received approval from the federal Food and Drug Administration, is morally problematic because of its close connection with cell lines derived from tissue taken from an aborted baby, the bishops said.

The Michigan bishops said Catholics have a responsibility to call for the development of vaccines without a connection to the sin of abortion.

“Abortion is a grave evil, and we must avoid complicity in abortion. Let us also pray for God’s peace, healing, and mercy for all those who have had abortions,” the bishops said. “Our consciences must not be dulled, nor may we imply in any way that abortion is acceptable.”

The vaccines developed by Pfizer, which gained approval for emergency use by the federal Food and Drug Administration on Dec. 11, and Moderna, for which approval appears imminent, have “remote” connections to such cell lines, but the Vatican’s Congregation for the Doctrine of the Faith has indicated Catholics may receive the vaccines given the lack of available alternatives and the “severe health risks” associated with the pandemic.

“Neither of these vaccines have used cell lines originating in tissue taken from aborted babies in their design, development, and production,” the bishops said. “However, both the Pfizer and the Moderna vaccine did use such a cell line in the confirmatory testing. This connection to the abortion is very remote, however, and it is important to keep in mind that there are varying levels of responsibility.”

The bishops’ statement echoes the position of the U.S. Conference of Catholic Bishops, which issued its own guidance on the COVID-19 vaccines Dec. 14.

While Catholics may receive the Pfizer or Moderna vaccines as an act of charity toward others and the common good, they are not morally obligated to do so, the bishops stressed.

However, “if one were to choose not to be vaccinated, one would have a moral responsibility to embrace the necessary precautions to avoid spreading the disease to others,” they said.

The development of the AstraZeneca vaccine is a cause for greater concern because of the way it was developed, the bishops said.

“It did utilize in the design, production, development, and confirmatory testing a cell line that originated from tissue taken from an aborted baby. This vaccine may be received only if there are no other alternatives,” the bishops said. “If one does not have a choice of vaccine and a delay in immunization may bring about serious consequences for one’s health and the health of others, it would be permissible to accept the AstraZeneca vaccine.”

The AstraZeneca vaccine is “somewhat similar in production to the Rubella vaccine, which the Pontifical Academy of Life indicated could be received for grave reasons and if there are no other alternatives,” they said.

Both Pfizer and Moderna’s vaccines were developed using mRNA technology, a new style of vaccine that effectively trains a person’s immune system to detect the infamous “spike” protein of the COVID-19 virus and mount an immune response. Both companies say their final test results showed their vaccines are approximately 95% effective at preventing severe COVID-19 symptoms. Both vaccines require two shots, spaced approximately a month apart.

Pfizer’s vaccine, which is the only one so far to receive FDA approval, began shipping nationwide last week, and has already begun to arrive in limited quantities at some of southeast Michigan’s hospitals. Health care workers, including those at Catholic hospitals such as St. Joseph Mercy Oakland in Pontiac and Ascension St. John Hospital in Detroit, will be among the first to be vaccinated.

It is expected the Moderna vaccine will receive FDA approval in the coming days.

The Michigan bishops’ statement follows a lengthy analysis by the chairmen of the U.S. bishops’ doctrine and pro-life committees, who documented the vaccines’ development in greater detail.

Even though the Pfizer and Moderna vaccines are permissible for Catholics to receive, those who do so must not ignore the abortion connection, however remote, said Bishop Kevin C. Rhoades of Fort Wayne-South Bend, Ind., and Archbishop Joseph F. Naumann of Kansas City, Kan.

“One might become desensitized to the gravely evil nature of that action. One might become complacent about that action and ignore the obligation to do what one can to oppose the evil action,” they said, adding that others might see “one’s acceptance of benefits from an evil action” and feel the action isn’t really evil, feel less urgency “to oppose that evil” or even miss opportunities to do what they can “to oppose it.”

“We should be on guard so that the new COVID-19 vaccines do not desensitize us or weaken our determination to oppose the evil of abortion itself and the subsequent use of fetal cells in research,” Bishop Rhoades and Archbishop Naumann said.