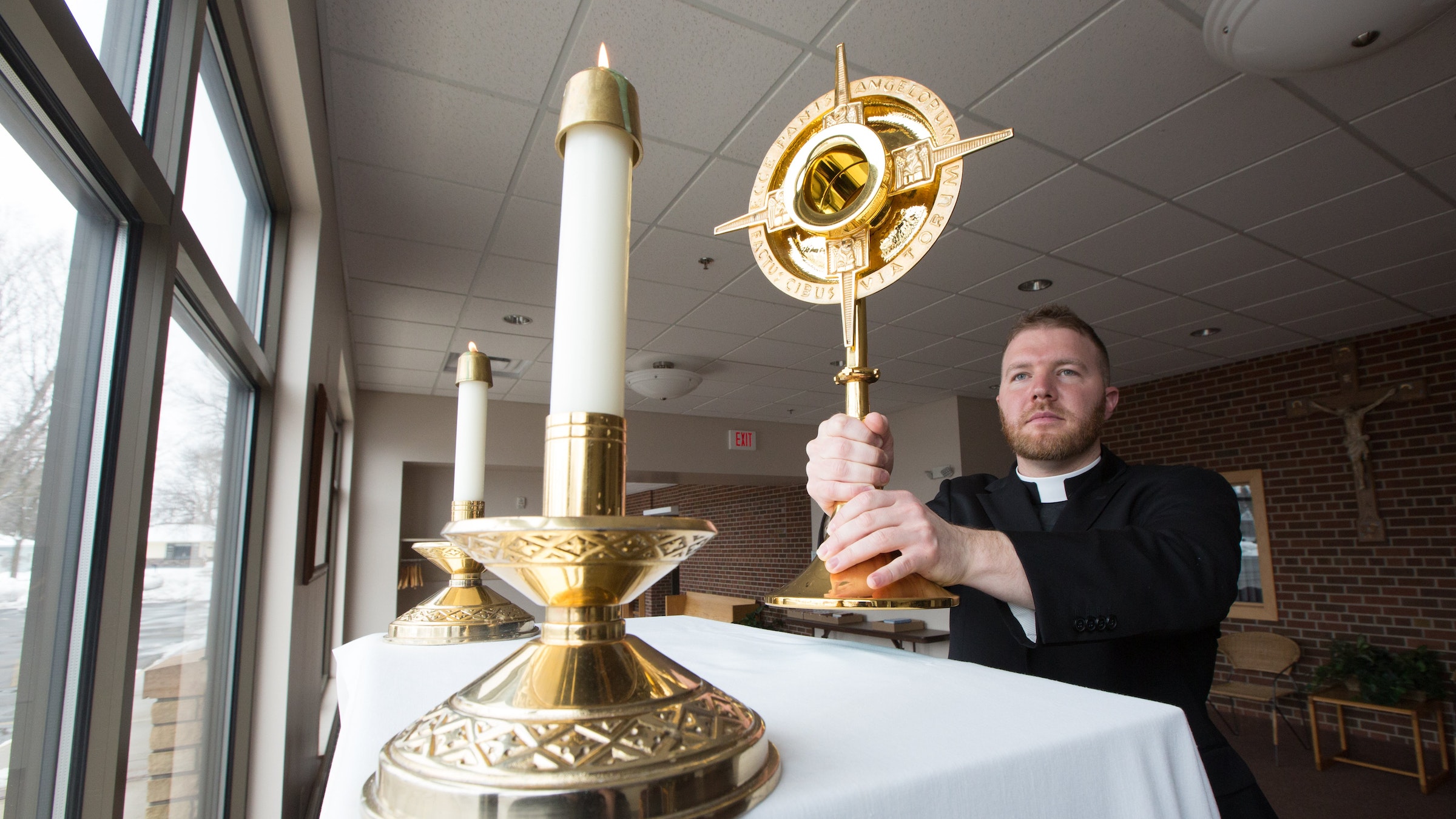 ST. PAUL, Minn. (CNS) — A year ago last March, Archbishop Bernard A. Hebda of St. Paul and Minneapolis sent an email to pastors letting them know he was closing churches for public Masses due to the COVID-19 pandemic.

Just days later, Father James Stiles, pastor of four parishes in the southwestern corner of the archdiocese, felt "a lot of confusion."

He had spent the past three years at those parishes trying to build relationships with the rural parishioners, many of whom are aging farmers. With some of them unfamiliar with social media and platforms like Facebook and Zoom, he was worried about losing his pastoral connection with them.

He worked with his associate, Father Timothy Sandquist, to draft a letter and send it to parishioners outlining a pastoral care plan to keep them engaged while public Mass was suspended.

"It was a very trying time," said the priest, ordained in 2015. "I remember feeling, personally as pastor, very helpless and useless, like how can I minister to my people if I can't even see them?"

Such was the burden carried by pastors throughout the archdiocese, who had to navigate the unprecedented reality of a pandemic that kept most people away from in-person Masses for at least two months and affected parish life in other ways since cases were first identified in the U.S. early last year.

The Catholic Spirit, the archdiocesan newspaper, interviewed three of those pastors to find out what this year was like for them.

Father Stiles, for his part, took to prayer all the concerns he had for his parishioners, especially when he celebrated Mass.

As the year went on, he moved from celebrating Mass for a livestream congregation to celebrating outdoor Masses in the church parking lot before the parish opened back up with limited capacity. The parish also offered drive-up eucharistic adoration from April through October on weeknights.

During the year, he had to think about his own health since he has diabetes.

There also was the potential that he and his fellow priests in the rectory would need to be quarantined for 14 days if any of them contracted the virus. Fortunately, he said, none of them has tested positive. And now, he is vaccinated, which provides further relief.

The virus hit home when one of his parishioners contracted it and died in October. Father Stiles had spoken to the man on the phone but could not visit him in person.

He said the grief of the past year is turning to hope, as many, himself included, look forward to having a full church again. There's even talk of a celebration sometime in the coming months.

"People are really longing to be together again," he said. "And, I am as well. ... The longer I'm a priest, the more I realize how important that is -- the fraternity, the community."

Father Phil Rask, pastor of St. Odilia Parish in Shoreview, is just over a year away from his 50th jubilee. With a long history of ministry, it would be easy to conclude he has seen it all. He might have thought so, too, prior to the pandemic.

During the year, he, like priests around the country, adapted to livestreaming Masses, which he now says the parish might continue doing because so many people tuned in.

He said the parish saw just a 5% dip in donations, which he said was easily offset by reductions in spending, so no one had to be laid off. The parish even hired three people who had been working at other parishes and were furloughed because of the pandemic.

The school also has thrived, gaining an enrollment increase of 30 to 40 students this school year.

But right before Thanksgiving, Father Rask tested positive for COVID-19. He immediately entered quarantine with the other priest at St. Odilia and has since recovered and was expected to complete his vaccinations in late March.

He was especially concerned about elderly parishioners during the past year facing isolation and loneliness and with limited contact with family. Those feelings work the other way, too, for family members who can't spend time with their loved ones.

Aside from many challenges, Father Rask overall is "pleasantly surprised" by how both he and his parishioners are faring.

With hope the pandemic is nearing an end, he said he most looks forward to one day not wearing a mask.

Father Dave Hennen, pastor of St. Elizabeth Ann Seton Parish in Hastings, like his fellow priests, was immersed in "doing the routines of parish life: daily Masses, baptisms, funerals, weddings and getting together for Bible studies and doughnuts after Mass" before the pandemic.

Early on, following advice of parish leaders, he decided the parish would continue offering perpetual eucharistic adoration in the main church and the sacrament of reconciliation six days a week.

The priest also did some deep soul-searching about his identity as a priest.

"So much of our priesthood is about things that we do: celebrate Mass, hear confessions and (administer) all the sacraments, and being with people," he said. "All of a sudden, it's gone. You're not doing most of those things anymore. And for me, I just had to realize my identity is not in just basically the things I do as a priest."

He spent more time in prayer, he said, where he also considered how the parish should move forward.

"It's been resting on my heart for months now that we need to be bold. We need to be more radical in how we live our faith," he said. "We can't just keep the status quo. That has been a big part of my prayer -- God has been asking me to lead the people in a more profound way in terms of their faith."

Part of that reflection has been triggered by the decrease in Mass attendance during the past year. Even as churches have opened up again to in-person Masses, Father Hennen has noticed some parishioners have not returned, and he wonders if they ever will.

"We're hoping they do," he said. "But we don't know for sure. So, it's me questioning: How have we been helping people have an encounter with Christ? Do we need to do more in helping them to have that personal relationship?"

For the past several months, he and parish leaders have been working on a parish mission statement to guide parish life going forward. One thing they don't have to worry about is finances, which are secure thanks to consistent giving, plus federal government support for employees' salaries.

With the gradual lifting of restrictions, the priest is hearing people talk about worshipping in public again.

"They just wanted to get back to some routine in their life," he said. "They wanted to come back to Mass. That's one of the things I think parishioners have experienced -- how much they long for the Mass and the relationships they built.

"I didn't think people would miss doughnuts (after Sunday Mass) as much as they do, but they actually do. They miss that ... fellowship and being with each other."

Like his parishioners, Father Hennen values connection with others. He stays grounded by meeting monthly with other members of his 2005 ordination class. With 15 members, it was the largest class in recent history.

In talking with his classmates, he said, they all have similar experiences from pandemic life.

And right now, seeing the pandemic almost in the rearview mirror, he said he believes people will "come out of this stronger, more faithful, more vibrant in who we are as Catholics."

Hrbacek is a photographer/reporter at The Catholic Spirit, newspaper of the Archdiocese of St. Paul and Minneapolis.