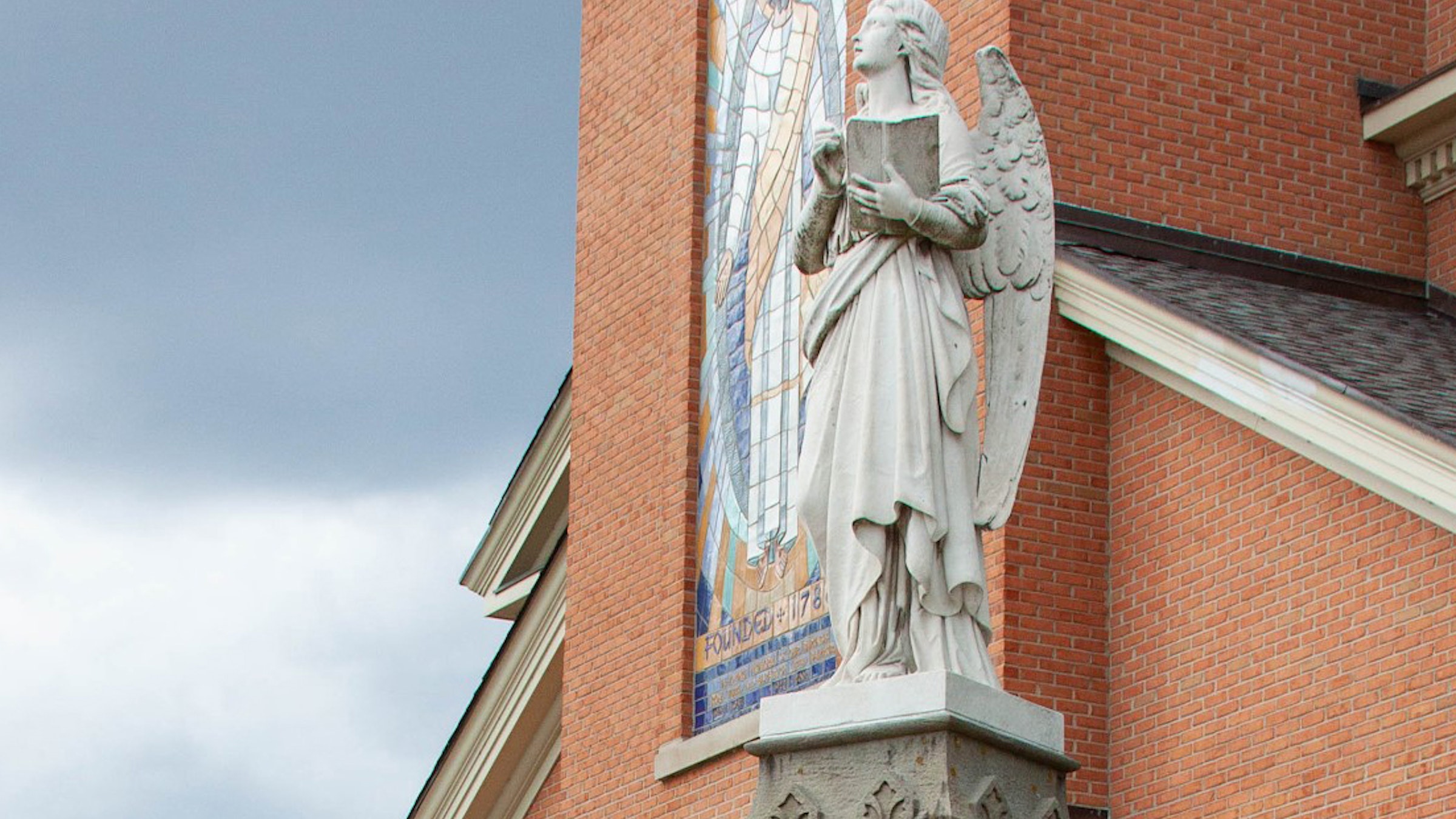 Overlooking the busy intersection of Elm and Monroe streets in Monroe, in front of St. Mary of the Immaculate Conception Parish, the 130-year-old “Recording Angel” statue stands as a monument to Monroe County’s faith and history. The statue is in need of repairs, worn by decades of weathering the elements. (Photos by Heather Wilson | Snap Happy Photography)

Monument outside St. Mary Parish a testament to the history and diverse faith of Monroe County, but its future is uncertain as elements take toll

MONROE — If you have ever been to the southern margins of the Archdiocese of Detroit, you might have stopped in the town of Monroe. At the prominent city corner of Elm and Monroe Street sits a massive equestrian statue of General George Custer, who grew up in the area as a boy. The imposing statue, named “Sighting the Enemy,” garners significant attention and is perhaps the most recognized landmark in all of Monroe County.

Across the road, an unassuming statue of an angel pays no attention to the stern stare of the Civil War general. Instead, she looks up to the sky, seemingly communicating with God about what to record next on the tablet in her left arm.

Despite its poor condition, this statue arguably possesses even more history and cultural significance to locals than its street corner counterpart. Fr. David Burgard, pastor of St. Mary of the Immaculate Conception Parish in Monroe, appreciates the parish’s 20-foot-tall angelic monument, but is aware many are indifferent.

“Its story and significance are unknown to the vast majority of people who pass by it every day,” Fr. Burgard said.

The Recording Angel statue was erected nearly 130 years ago as a gift commemorating the centennial celebration of St. Mary, the second-oldest parish in the archdiocese, behind only the historic Basilica of Ste. Anne in Detroit. The statue is also the oldest outdoor monument in Monroe County.

In the early 1780s, French-Canadians began to settle along the banks of the River Raisin, 15 miles south of the Detroit River along Michigan’s Lake Erie coastline. Several years later, in 1788, with the so-called Frenchtown settlement growing to more than 100 families, the parish of “St. Antoine a La Riviere aux Raisins” was established. The parish community, composed almost entirely of peasant farming and fur trading families, fittingly chose St. Anthony of Padua, the patron saint of the poor. For the next few decades, numerous resident and itinerant priests served St. Antoine. One of its first priests noted that the Frenchtown faith community felt like “the last and most distant parish inhabited by Catholics on this earth.”

Fr. Gabriel Richard, the multi-talented pastor of Ste. Anne in Detroit, frequently celebrated Mass and presided over 99 marriages at St. Antoine between 1805-24. He also shepherded the Frenchtown flock through the War of 1812, which witnessed firsthand the Battle of the River Raisin, the largest armed conflict on Michigan soil. The settlement was left in shambles after the war, but Fr. Richard was able to secure $1,500 in relief funds for locals remaining in the area.

The beloved priest was also able to secure a new piece of property to build a church. A new house of worship was badly needed for the growing parish. Fr. Jean Bellamy, one of the earliest resident pastors of St. Antoine, recalled how on Good Friday in 1825, it was quite evident that the present church would not last much longer. Fr. Richard visited to preach on the Passion of Christ and settlers from near and far subsequently packed into the small wooden church. Fr. Bellamy noted in a letter that day “it is a miracle that the floor of my church did not collapse under the weight. My little church is upstairs over the room that serves as my rectory ... In trying to enter my chamber after the ceremony, I could open the door only with great difficulty. The ceiling had sunk so far that whereas it was ordinarily two inches above the door, it was now touching it."

More than a decade later, the new church was completed on the corner of Elm and Monroe streets. Then, in 1845, in the midst of a mid-century Marian revival in the Church, St. Antoine was renamed St. Mary of the Immaculate Conception. By that time, St. Mary parishioners were not just of French origin; Irish Catholic immigrants began showing up in the pews, escaping the Potato Famine that struck their homeland in the 1840s. German Catholic immigrants also settled in the Monroe region and initially attended Mass at St. Mary.

Throughout the 19th century, the parish worked to spread and support the Catholic faith in many other areas of Monroe County. In the 1820s, Fr. Bellamy frequently traveled on horseback from Monroe to the Bay Settlement community 15 miles to the south. There he tended to a growing group of Catholic farming families at St. Joseph Parish in Erie, which is now the archdiocese’s third-oldest parish.

St. Mary priests subsequently assisted other Catholic pioneers along Swan Creek and Stony Creek, leading to the establishment of St. Charles Borromeo Parish in Newport and St. Patrick Church in Carleton. The German- and English-speaking parishioners of St. Mary ultimately decided to form their own parishes elsewhere in Monroe. In 1852, St. Michael the Archangel Parish was founded specifically for the city’s German Catholics, and St. John the Baptist Church was completed in 1874 for Monroe’s Irish Catholics.

On Oct. 15, 1888, Monroe County’s “mother parish” commemorated its centennial with a huge celebration. With many of the other local Catholic parishes having direct ties to St. Mary, the faithful from both the city and countryside converged at the corner of Elm and Monroe for the festivities. A local newspaper called it “the largest demonstration of a religious nature ever held in this county.”

The commemoration started with simultaneous morning Masses being celebrated at St. Mary, St. Michael, and St. John. Afterward, a grand parade made its way through downtown Monroe. Horses, bands, floats, and even a cart carrying a replica of the old St. Antoine Church were marched in the public procession.

The large gathering culminated with speeches from local clergy. Perhaps the most moving pronouncement was declared by a “Fr. Cooke, C.S.S.P. of Detroit.” He proclaimed that “each individual stands not only as representative of the present, but as the maker of the future. You will have struggles, but hundreds of years hence, when your children's children gather, the work of God will have been perpetuated through you. Not only will you then have perfected the work of God on earth, but you will have attained eternal reward ... What would even the fathers of the Catholic faith in Monroe say, could they look down upon the hundreds who gather here as the result of their labors? Your magnificent presence is a testimony of the magnificence, virility and indestructibility of the Catholic Church.”

The inspiring celebration, however, was noticeably missing one thing: A brand new commemorative statue was supposed to be dedicated at the centennial gathering. Apparently, the parish mistimed their order, turning in their request too late. The large delivery from Italy took 101 days to cross the Atlantic Ocean.

Finally, on Thanksgiving Day in 1889, the statue was ready to be revealed. Morning Mass was celebrated inside the church, followed by a festive lunch with a live band. Then at 2:30 p.m., the statue was unveiled in front of the large gathering. Platforms were constructed to hold the numerous local clergy, politicians and the band that continued to play.

Once the drapery was pulled back, spectators laid their eyes on the elegant, 1,200-pound “Recording Angel” for the first time. Cut from white Carrara marble, the 8-foot-tall statue was placed on top of a sturdy, 12-foot-tall granite base. Carved into this tiered base was the seal of Monroe County, the date of the parish’s founding and centennial, and the names of some of the prominent people involved in the statue’s dedication. Also inscribed in the base was a quotation taken from a message George Washington addressed to American Catholics who supported his presidential election in 1790: “May the members of your society in America, animated alone by the pure spirit of Christianity, and still conducting themselves as the faithful subjects of our free government, enjoy every temporal and spiritual felicity.”

Perhaps the most important inscriptions, however, are the multitude of Monroe County Catholic names that contributed financially to the statue’s creation. Local historian and St. Mary parishioner Lynn Reaume conducted detailed research to reveal the incredible diversity of the donors. Not only are there French and Belgian families from St. Mary inscribed into the base of the Recording Angel statue, but Germans from St. Michael and Irish members of St. John. The list of patrons also demonstrates a diversity in occupation and social status. Some were influential bankers, politicians and attorneys who worked in the city while others were shoemakers, grocers, butchers, barbers and saloonkeepers who labored in downtown storefronts. Many other donors tended to their farms in the rural outskirts of Monroe.

As Reaume fittingly noted in St. Mary’s parish history book published for its bi-centenial, “The efforts of this multi-national, multi-parish group to erect the symbolic statue in front of St. Mary’s is a wonderful sign of cooperative action among the Catholics of the Monroe community.”

Fr. Burgard added, “it expresses the peoples’ gratitude to God for the gift of their faith, passed on to them from many of the original Catholic settlers.”

Sadly, it might take significant cooperative action among local Catholics to save the Recording Angel in the coming years. For well over a century, the heavenly figure has been a fixture on Monroe’s most prominent corner and has been an eyewitness to monumental changes with the passage of time. Yet, the effects of nature and airborne pollution have taken a toll on the 130-year-old statue. Many of the inscriptions underneath the Recording Angel can be hardly read.

“My concern is that it may be too late for the statue,” Reaume said. During the most recent conservation efforts, some observed the Recording Angel might be suffering from “stone cancer,” a deteriorating condition that affects outdoor marble monuments and structures.

Given the effects of the coronavirus pandemic, Fr. Burghard said St. Mary Parish does not have the necessary funds or resources to refurbish the statue, but the parish is considering potential solutions.

“There has been talk of moving it, also, but this is also costly, and where would it be placed where it could be protected and appreciated?” Fr. Burgard said.

In the meantime, the angelic figure remains at the busy street corner where she’s been stationed for more than a century. Though many pass the Recording Angel unaware of its historic nature and cultural significance, some in the know are appreciative and inspired by the statue’s continued presence.

“It expresses the peoples’ gratitude to God for the gift of their faith, passed on to them from many of the original Catholic settlers,” Fr. Burgard said.

Reaume added that, “it can remind us that we had better have good deeds to put in her book!”

Though the statue’s fate is uncertain, the Recording Angel has never been concerned about what the future holds for her. She seemingly continues to jot down current events in Monroe, adding to the long list of historic moments and appealing to the better angels of both parishioners and pedestrians in the present.