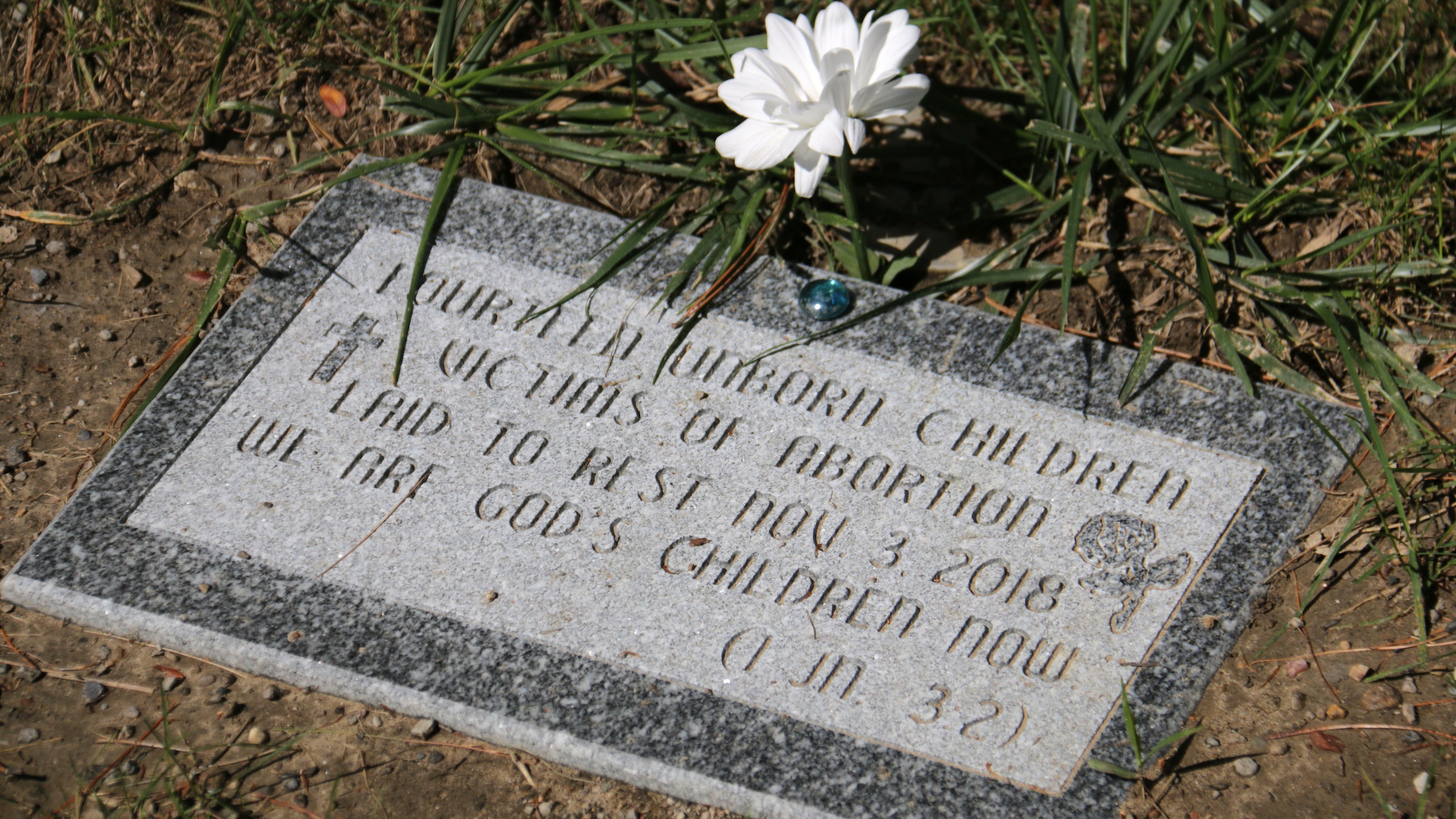 A gravestone marks the location where 14 victims of abortion are buried at Holy Sepulchre Cemetery in Southfield. Each year in mid-September, hundreds gather at graves of aborted children across the nation to pray, ask God’s mercy and to end the violent practice. (Michael Stechschulte | Detroit Catholic)

Annual Day of Remembrance for Aborted Children started in Metro Detroit in 2013, has since grown to include all 50 states, Guam

SOUTHFIELD — At cemeteries across the country, prayer vigils took place Saturday, Sept. 12, to mark the seventh annual National Day of Remembrance for Aborted Children, honoring the 63 million babies lost to abortion in the United States since Roe v. Wade was decided in 1973.

The memorials were sponsored by Citizens for a Pro-Life Society, Priests for Life and the Pro-Life Action League.

Monica Miller, Ph.D., founder of Citizens for a Pro-Life Society and co-director of the National Day of Remembrance, organized the Metro Detroit event, held near the gravesites of 37 aborted children at Holy Sepulchre Cemetery in Southfield.

Pro-life advocates joined her, reading from Scripture, singing hymns, leading prayers, and speaking about abortion’s painful toll. The 102 people in attendance were invited to lay white roses, red carnations and yellow mums on the graves as “Let Charity and Love Prevail” was sung.

Miller then introduced Kadisha Torrence, a woman whom she met several months ago while doing sidewalk counseling outside a Detroit abortion clinic.

Torrence had considered abortion, but ultimately decided to keep her child, a boy, who is due Oct. 31, Miller said.

“Kadisha Torrence has stood up against a lot of obstacles to get where she is right now,” Miller told the crowd. “You can see, Kadisha decided to have her baby. ... We are going to have the biggest baby shower for her. I just love Kadisha; she has truly done the unselfish thing.”

Torrence, 29, told those gathered she had discovered a new lease on life after meeting Miller, who “taught me unconditional love,” she said.

“I learned that just because it seems bad at the moment, there’s always greater opportunity in the long run, which is what I have here today with my three daughters, along with my son,” Torrence said. “I actually cannot wait to meet him at the end of October when he joins our family so we can be one.

“From here on out, if I was ever to meet a young lady or family in my situation, I would try to talk them out of an abortion as well. Really, all of the babies deserve to be here,” she added. “Who are we to take away life when God gives it to us?”

Another woman, a mother of 12, traveled from Kansas to share her testimony. When she was 16 years old, she became pregnant and was pressured into getting an abortion against her will.

“That moment in time changed my life,” said Jennifer McCoy, who has since been involved in pro-life work for 30 years.

McCoy said she discovered healing when, during a retreat with Rachel’s Vineyard, a pro-life ministry for post-abortive mothers and fathers, “I felt moved to ask the father of my child to write a letter to our son.”

McCoy read the father’s words, which spoke of unrelenting pain, sorrow and longing for forgiveness.

“‘You were just waiting to see the light, my son, and that light was taken from you by the decisions that were made at a time when I was not strong enough to carry out my Catholic beliefs,’” the father wrote in part. “’If only I had known how much it hurts.’”

McCoy’s own father, James Patterson of Dearborn, said he was in his mid-20s when the Supreme Court legalized abortion through all nine months of pregnancy.

“It was like Nazi Germany; you knew something was wrong, but you didn’t want to deal with it. It’s proved to be a slippery slope,” Patterson said. “Perhaps this state-sanctioned nightmare will end soon. I hope so. It’s a terrible thing.”

Andrew Carl, 15, was among the youngest people at the service. On a warm, sunny day, Carl attended with his parents, Ann and Greg, because the pro-life movement “is something I strongly believe in,” he said.

“There really isn’t that much awareness about it and it’s definitely something that is really controversial,” said Carl, a student at Divine Child High School in Dearborn. “Awareness needs to be brought to everyone about it. The more people you have around an issue, the better.”

Another of those at the service was Fr. Derik Peterman, associate pastor of Our Lady of Sorrows Parish in Farmington. Fr. Peterman noted the power of praying for those who’ve had abortions, the victims and for an end to the violence against those in the womb.

“No prayer is wasted,” Fr. Peterman said. “I came to join others who are praying not only for the souls of these children who have been aborted, but for an end to the evil of abortion. God hears those prayers, especially when we come together in community. That prayer is powerful.”

Przemek Rozestwinski, a seminarian at SS. Cyril and Methodius Seminary in Orchard Lake, said he’s already begun an initiative to give handmade blankets to expectant mothers at Mother and Unborn Baby Care, a pro-life pregnancy clinic in Southfield.

“As much as the abortion movement tries to desensitize people into believing that the baby in the womb is only a lump of some cells, Catholic burial with all its rites commends the unborn babies to God’s grace and mercy,” Rozestwinski said. “It recognizes the dignity of the human body and soul. It shows people and makes them aware that these children are God’s creation. Funerals of the unborn play an important part in the education of the public about the dignity of life.”

Pro-Life Michigan director Lynn Mills, who read from 1 Corinthians at the service, noted the babies buried at Holy Sepulchre had been aborted and “tossed out as trash. They were an inconvenience.”

“More than 100 memorial services were held across the United States, and it was clear this should become an annual event,” he said.

This year, 186 memorials took place, with every state and the territory of Guam participating.

“If we don’t step up and honor these babies at least once a year, no one is going to do it,” Miller said. “Their mothers and fathers are lost. So it’s important for us to be here, and to witness that their lives were meaningful and valued.”