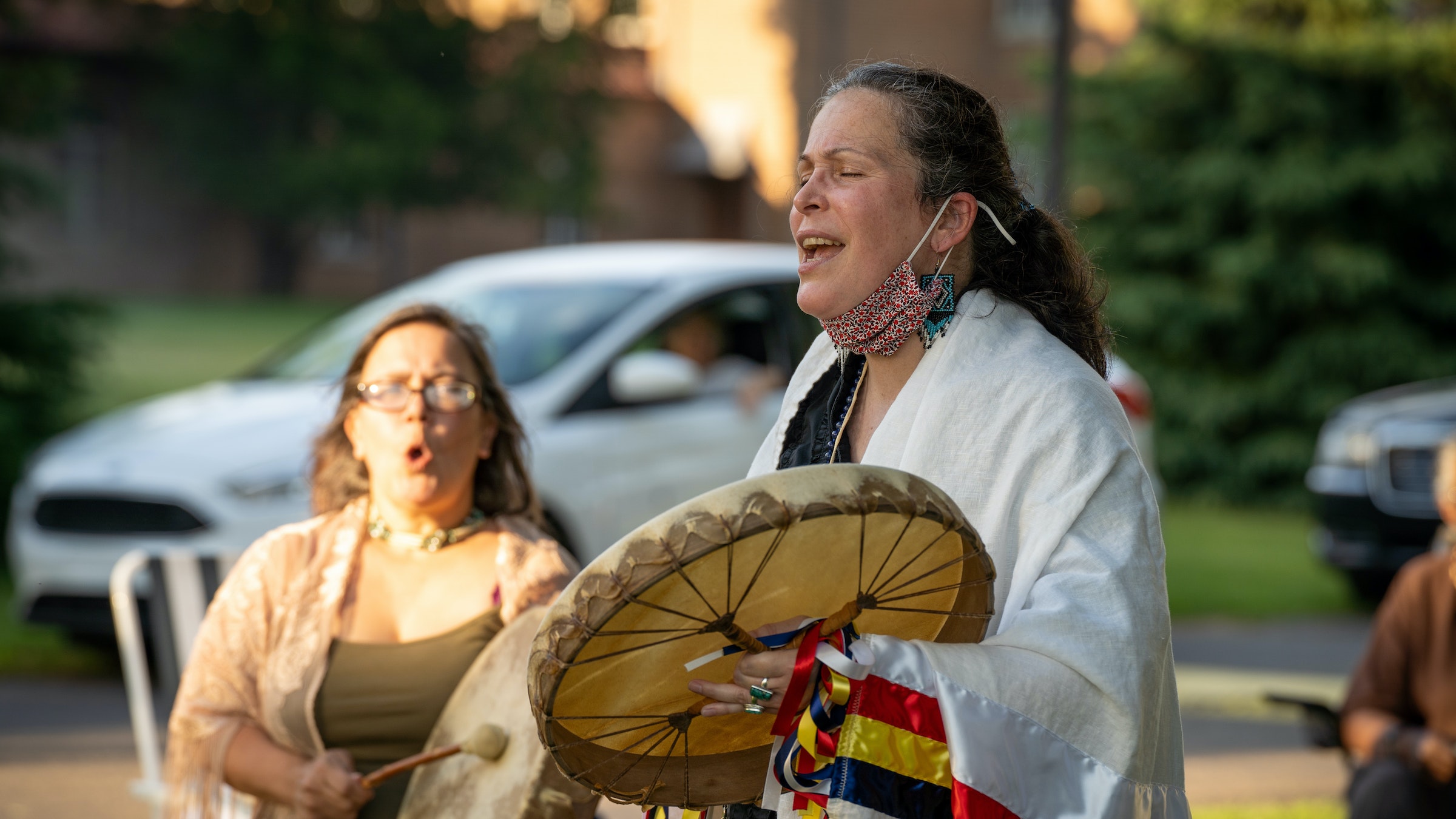 Chantel Gros-Louis leads the St. Kateri Tekakwitha Nicholas Black Elk prayer circle during a summer solstice blessing on the grounds of the Felician Motherhouse in Livonia on June 21. The annual celebration of the coming of summer is a chance for Native American Catholic to thank God the Creator for all of creation, Gros-Louis said. (Photos by Valaurian Waller | Detroit Catholic)

LIVONIA — Native American Catholics and friends gathered on the grounds of the Felician Motherhouse in Livonia to celebrate God’s creation during the Summer Solstice on June 21.

Twenty-five members of the St. Kateri Tekakwitha Nicholas Black Elk Circle and friends gathered in a circle to celebrate a Solstice ceremony combining aspects of Native American spirituality with the Catholic faith to give God thanks for all of creation.

“The solstice is important (in Native American culture) because it times up with when crops are starting to grow. The sun is at its highest, the days will start to get shorter, and it’s the beginning of summer, which is a significant time for indigenous people,” said Fr. Charles Morris, professor of religious studies at Madonna University and chaplain to the St. Kateri Circle.

Fr. Morris, who led the solstice ceremony, likened it to traditional Ember Days in the liturgical calendar between Pentecost and Trinity Sunday, with specific Masses to beg for God’s forgiveness and give thanks for all the blessings He’s bestowed upon His people.

The tradition was particularly popular among agricultural communities, Fr. Morris said, just as the summer solstice is a particular time to connect with nature in First Nations communities.

“First Nations folks have a lot to remind us of our own deep tradition and spirituality,” Fr. Morris told Detroit Catholic. “Especially as we are part of God’s creation, not apart from it, in the sense of the sacramentality and life of the sacredness that’s everywhere. So today is a chance to stop and contemplate, as Pope Francis challenges us to do in the last part of Laudato Si’, that Franciscan sense of wonder in God’s creation.”

The opening of the solstice ceremony began with the Sign of the Cross and Blessing with Smudge, a mixture of herbs, sage and tobacco that is burned and used to bless the congregation, similar to the incensing of the altar and congregation during the beginning of Mass. 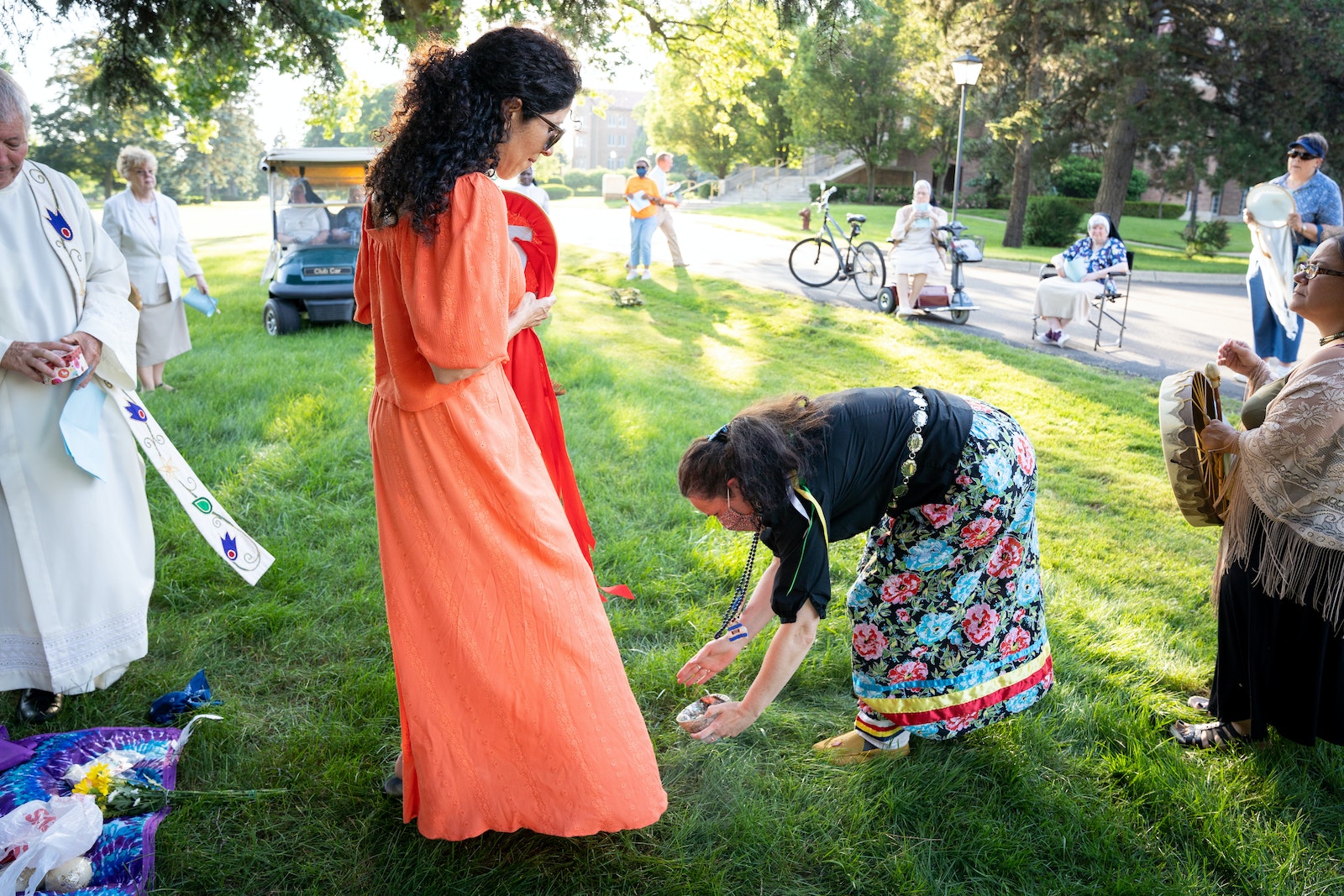 Gros-Louis applies smudge, a type of incense made from sage, to Anita Ruiz during the start of the solstice ceremony. Smudge is used in Native American prayer services much like incense is used during Mass, putting people in a prayerful mood through scent.

“The smudge we used today is from sage,” said Chantel Gros-Louis, coordinator of Native American Ministry for the Archdiocese of Detroit, who incensed the people gathered with smudge. “The Great Lakes nations use a lot of sweet grass, which grows in the Great Lakes. ... But we also have access to sage, cedar, tobacco, all of it is a way to say thank you to the Creator for all there is.”

After an opening hymn, the circle prayed a prayer to St. Kateri Tekakwitha — the first Native American to be canonized a saint — and read Scripture from Isaiah.

The group then prayed six times facing six different directions — North, South, East, West, the sky and the ground — giving thanks to God for all of creation.

“In Scripture, God promises Jacob his descendants will be blessed from the North, South, East and West,” Fr. Morris said. “In the Book of Revelation, there are angels coming in from the four directions. In Native American culture, there is a sense that the different directions represent different people, different cultures coming together. Furthermore, in First Nation culture, the sky and ground are also considered directions. So we have people holding banners representing the different directions, and we root ourselves and turn to each one to give thanks.”

The group then prayed for the beatification of Servant of God Nicholas Black Elk, a medicine man, catechist and member of the Oglala Lakota people and one of the most influential Native American Catholics in the 20th century.

The group sang the hymn “Canticle of the Sun” while placing gifts on a blanket in the center of the circle for a gift exchange. Gros-Louis, a member of the Longhouse People of the Huron-Wyandot First Nation in Canada, sang a hymn of thanksgiving and praise to God for the summer season. 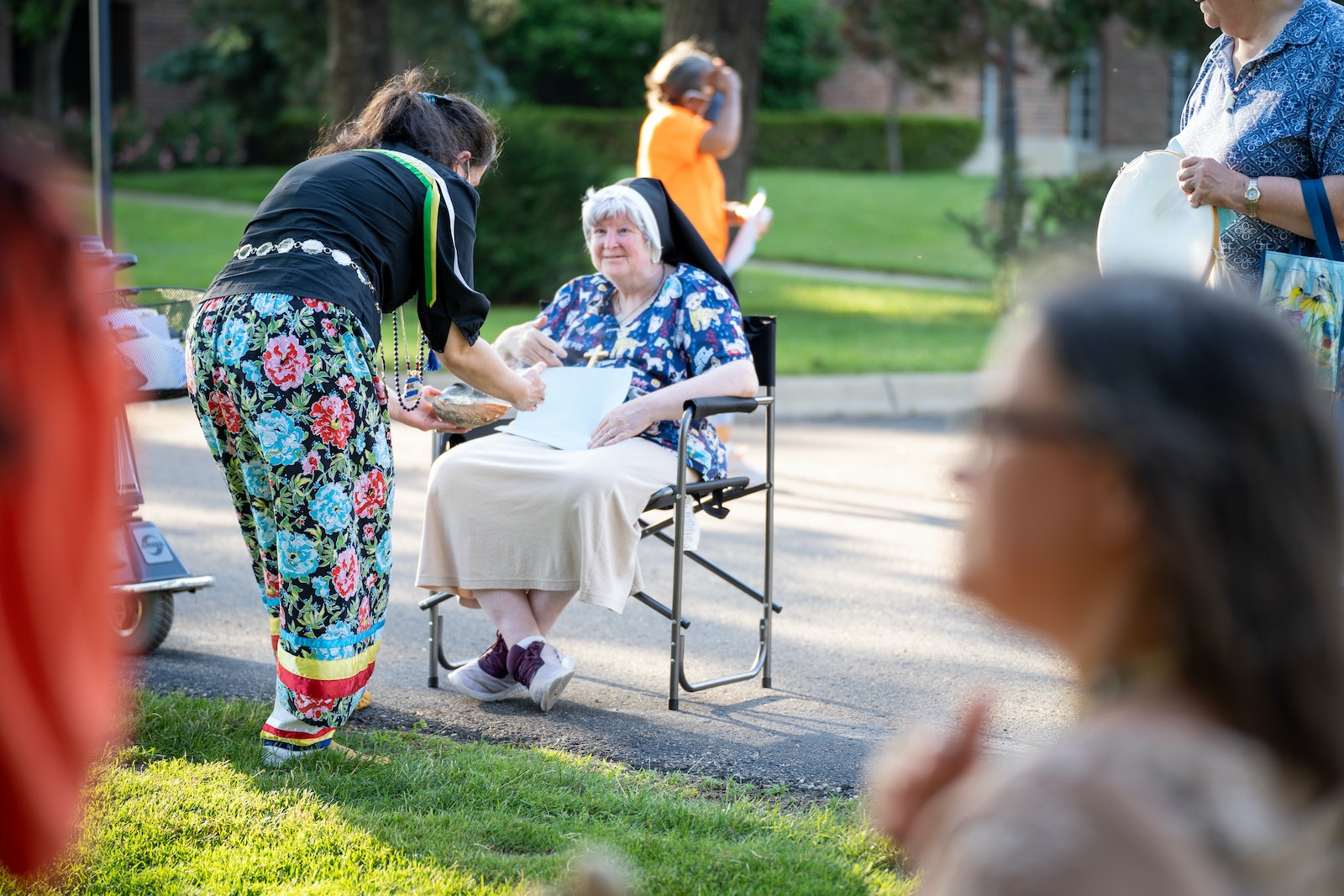 The Felician Sisters in Livonia have regularly hosted the St. Kateri Tekakwitha Nicholas Black Elk Circle for solstice prayer services. The solstice blessing is an opportunity for Native American Catholics to share their culture with the wider Church, said Fr. Charles Morris, who presided over the blessing.

“That was in my ancestral language, a song to celebrate; the moccasin song,” Gros-Louis said. “We use it for ceremonies and celebrations with our ancestors, such as today. Our philosophy is that we sing and dance as a way of thanking our Creator and connecting with the Creator in everything we see. That’s how dancing and singing is sacred, a celebration of all things sacred.”

The St. Kateri Tekakwitha Nicholas Black Elk Circle meets on the second Wednesday of the month at St. Kateri Tekakwitha Parish in Dearborn from 6:30 to 8 p.m., with the exception of July and August. In July, Fr. Morris and members of the circle will be traveling to the Tekakwitha Conference in Alexandria, La., from July 20-23 to discuss issues related to the Indigenous Catholic community in North America.

The conference comes at a pivotal time for the Church and Native American ministry, following the discovery of unmarked graves at church-run Indian boarding schools in Canada and the United States.

Indigenous leaders have called on Pope Francis to make an apology on native soil for the Church’s involvement in running the schools, and the pope is planning to visit Canada next month.

The pope’s visit in one of many steps the Church needs to take in the process towards reconciliation with the Indigenous community, Fr. Morris said. 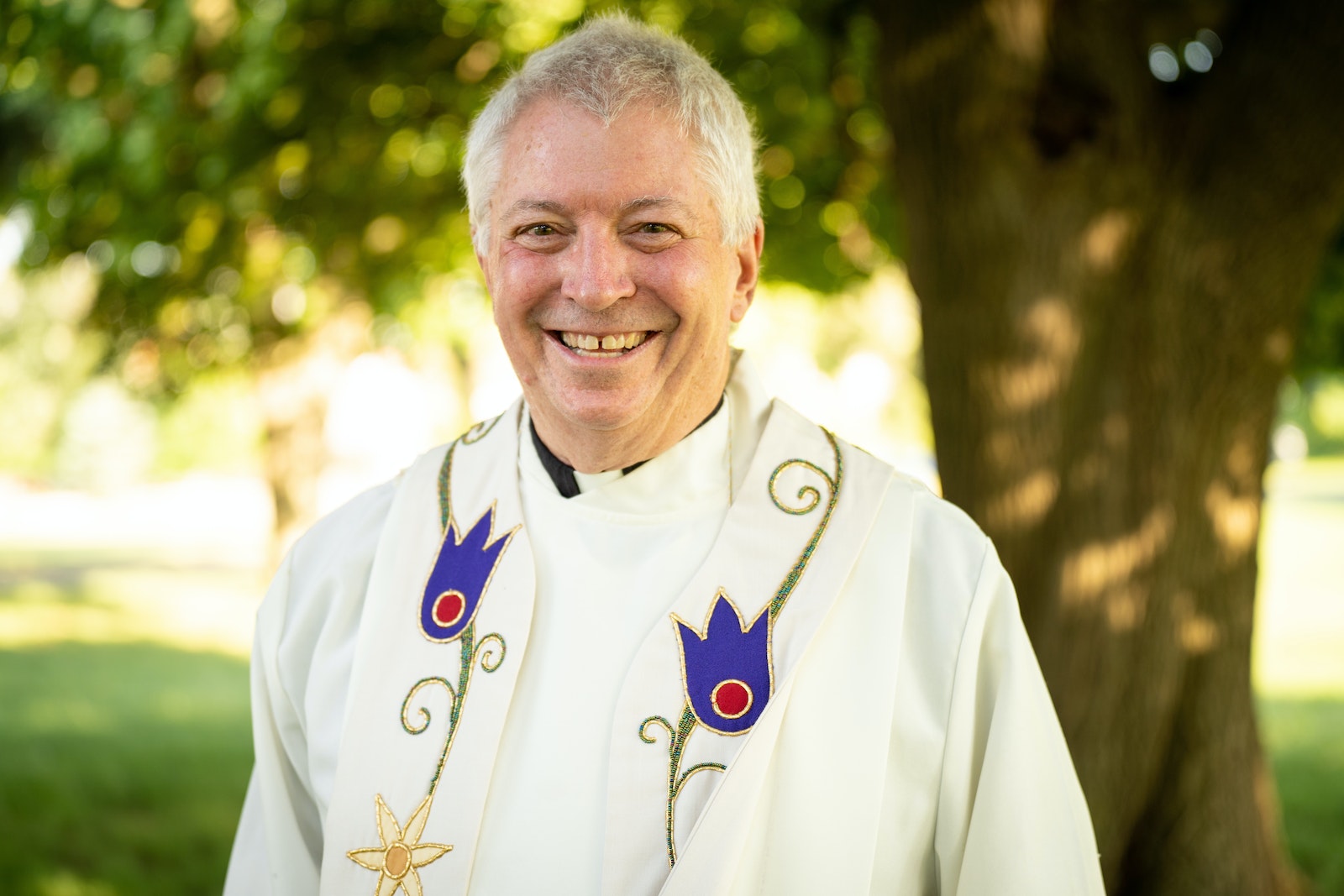 Fr. Charles Morris, professor at Madonna University and chaplain to the St. Kateri Circle, wears a stole made in Ontario commissioned in 1997 by the Ojibwe and Wyandot tribes for Native American ministry. The stole features beads woven into patterns that carry great significance in the Ojibwe and Wyandot communities.

Fr. Morris added it’s important to build trust in the future with the community, including learning more about the wants and needs of the First Nation communities today, where the Church is failing to accompany those in need, and incorporating the culture of Native Americans into the Church, as it has done with cultures all over the world.

“When (Antoine de la Mothe) Cadillac came here, who was greeting him? They were the Indigenous people here a long, long time before the French came, the Irish, the Germans, the Polish, the African-Americans,” Fr. Morris said. “They have been here and have such wisdom. Every culture has wisdom, and we as a Church become richer if we can recognize the unity and diversity each culture brings.” 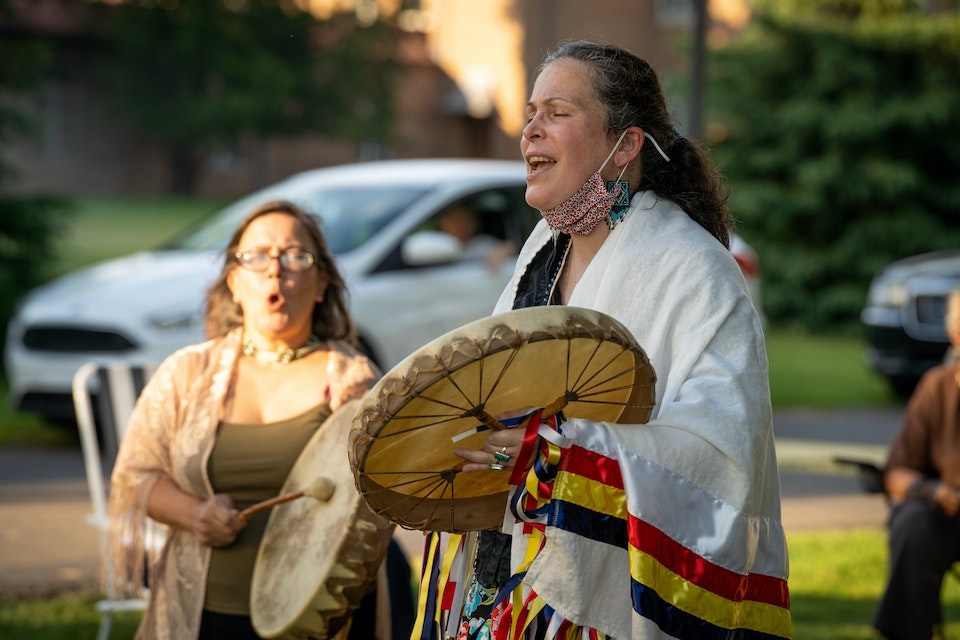 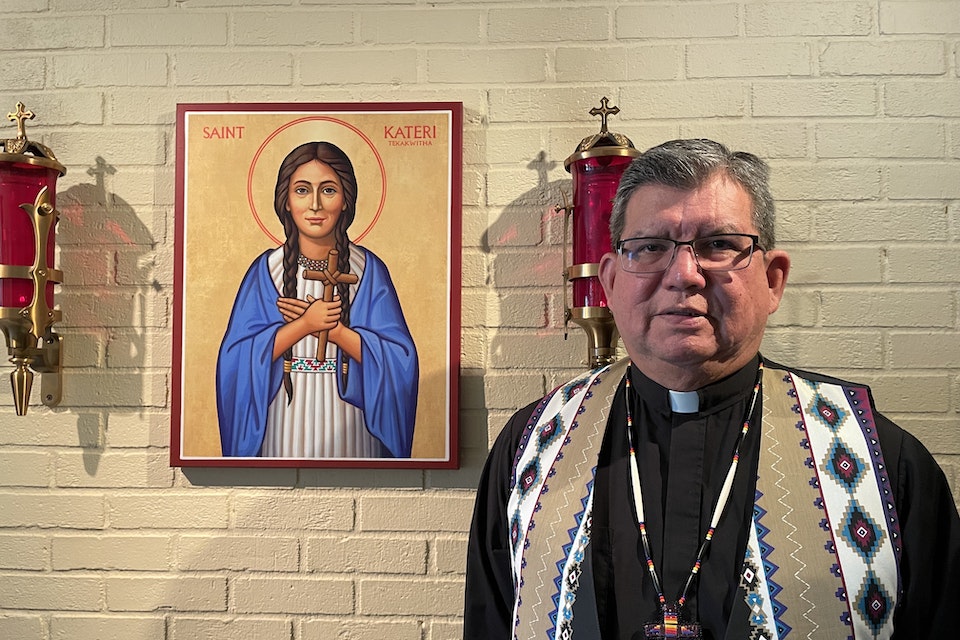