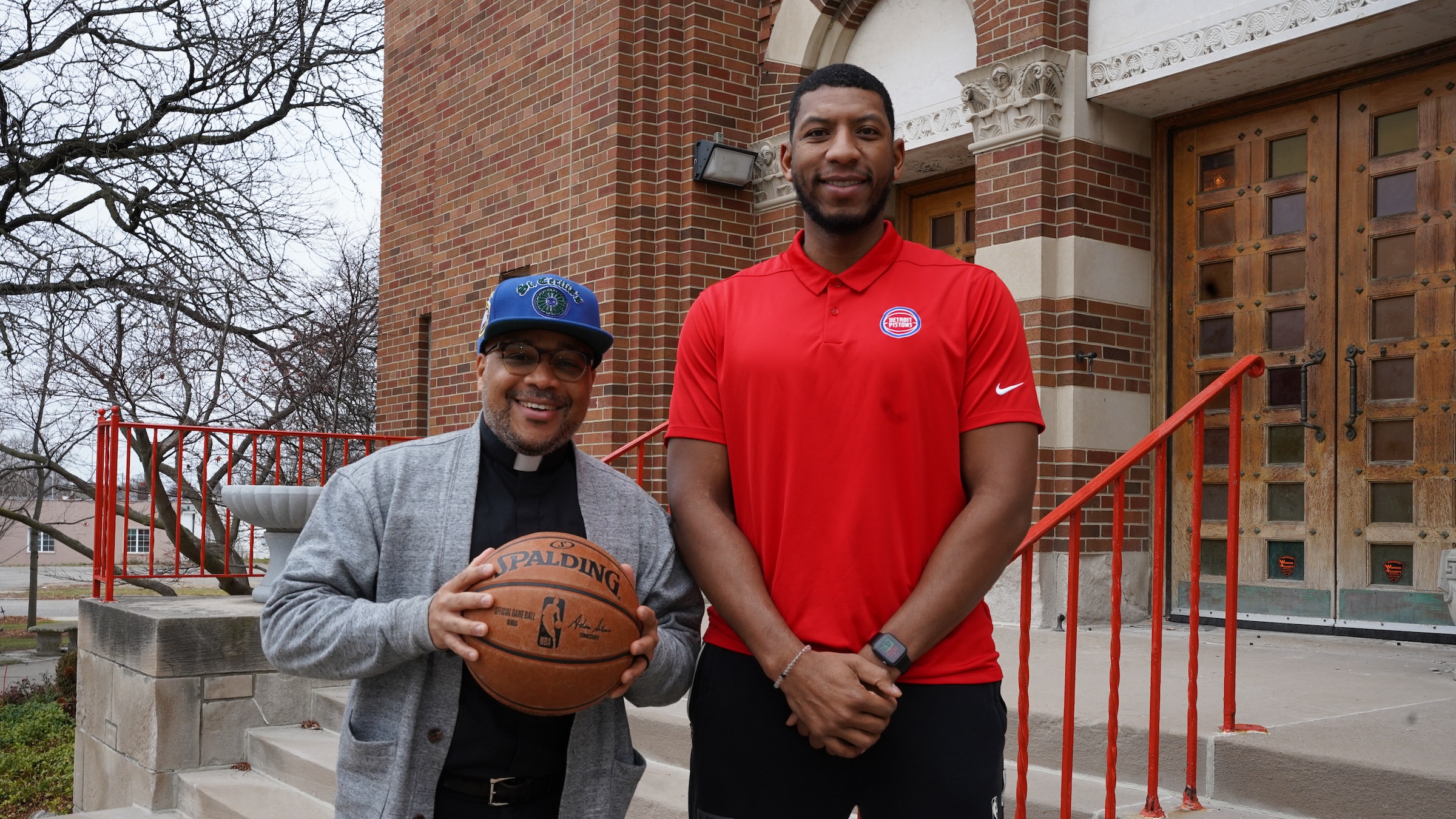 Detroit Pistons assistant coach Andrew Jones III stands with Fr. John McKenzie outside Christ the King Church in northwest Detroit, where Jones is currently taking OCIA classes with a plan to become Catholic during the Easter vigil. The NBA coach said his wife and three children, who are Catholic, were an impetus for his decision to investigate the Catholic faith. (Photos by Daniel Meloy | Detroit Catholic)

Coach Andrew Jones III's wife and children are Catholic, so he teamed up with Fr. John McKenzie to learn more about the Church

DETROIT — Fr. John McKenzie first noticed Andrew Jones III in the halls of the National Shrine of the Little Flower Basilica in Royal Oak, where Jones was holding his son, Andrew IV.

With Jones’ 6-foot-9 frame, he was hard to miss. But Fr. McKenzie, who at the time was an associate pastor at Shrine, walked up to Jones to introduce himself and asked the question every tall man is asked: “Do you play basketball?”

Jones said he did and currently coaches. Fr. McKenzie asked where he was coaching, and was shocked to learn he was speaking to the assistant coach of player development for the NBA’s Detroit Pistons.

Jones’ wife, Julia, and their children, Ava, Heidi, and Andrew, are parishioners at Shrine, Fr. McKenzie learned, but Jones at the time was not. He and Fr. McKenzie talked about basketball, family and faith, before Fr. McKenzie asked the inevitable question: Why wasn't Jones Catholic?

The chance encounter at Shrine began a friendship that continued when Fr. McKenzie transferred in July to Christ the King Parish in Detroit, where Jones is now taking OCIA classes and plans to enter the Church this Easter.

“The seed was planted early with my wife and her being Catholic,” Jones told Detroit Catholic. “I was always interested; I did some research here and there on the faith, to be more abreast of what she believes in and the way she worships. But it wasn’t until we got to Detroit, and I met Fr. John, who has been a great mentor, a leader in the faith, that I started to dive deeper into faith and what it meant.” 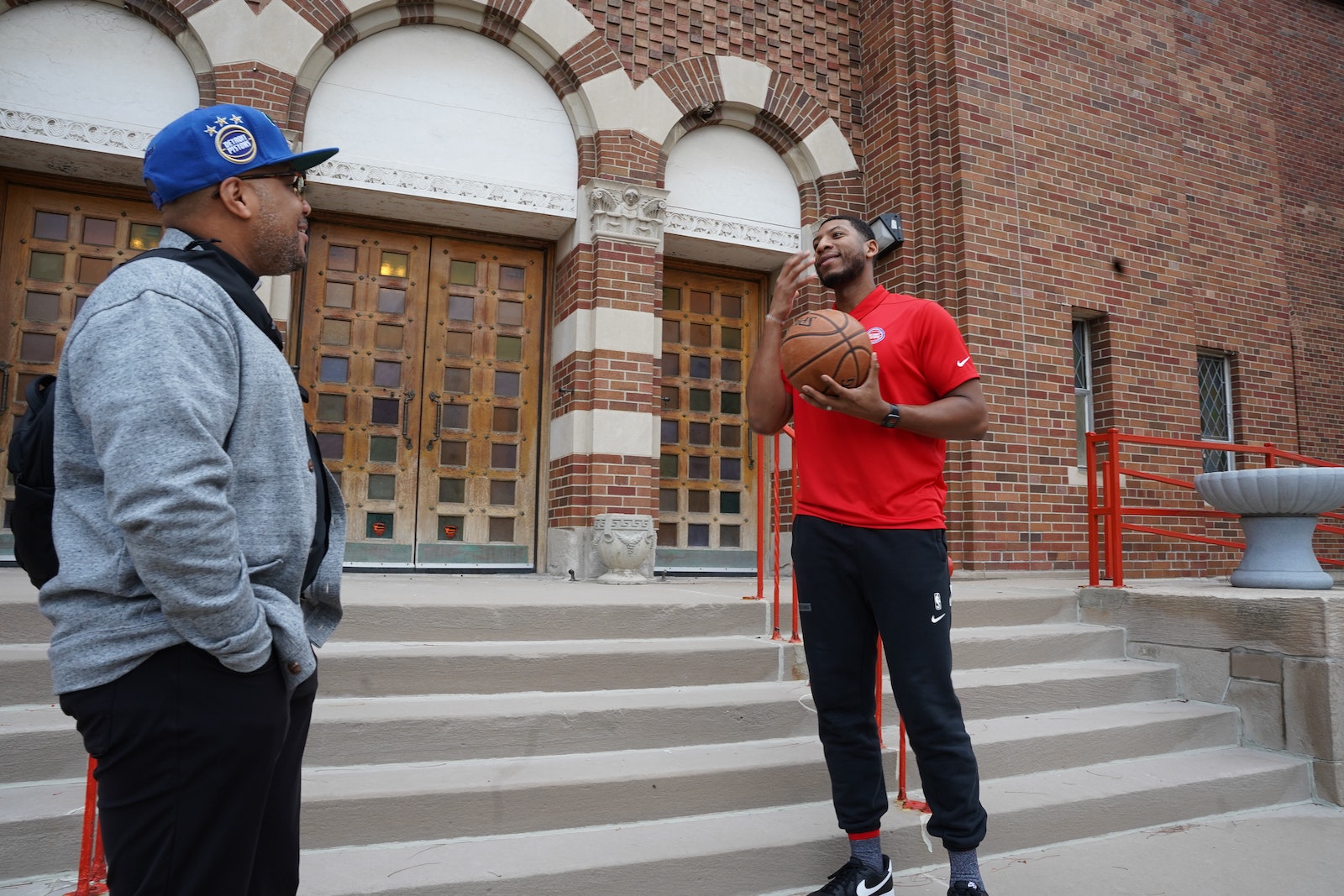 After a chance encounter at the National Shrine of the Little Flower Basilica in Royal Oak, Fr. McKenzie and Jones have remained close, with Fr. McKenzie coordinating Jones' faith formation about his busy NBA schedule.

Fr. McKenzie has visited the Jones family to bless their home and has remained a presence in the family’s life since they moved to Detroit in 2021, when Jones joined the Pistons, always inviting Jones to explore the faith.

“I just think being yourself, being real, leads people to Christ,” Fr. McKenzie said. “I encounter people all the time that have some inkling toward the faith. I had one fellow who was listening to the Gospel when in the locker room of the gym. It was the Gospel of John, and I said, 'That is my favorite Gospel.' I ended up inviting him to church, and he came to church that Sunday. Being yourself, being normal, being real — that is my first job as a priest preaching the Gospel, preaching the proclamation of Jesus Christ.”

Jones said it’s been enlightening to learn more about Catholicism, particularly the Scriptures and the Eucharist.

Jones started the OCIA process this fall, working with Fr. McKenzie to coordinate classes around the busy 82-game NBA schedule. Jones is on the road half the season, and when he isn't, he is scouting future opponents and working day to day developing the Pistons’ young squad. Fr. McKenzie is supplementing Jones' faith formation using Fr. John Riccardo’s “The Rescue Project” as catechism material. 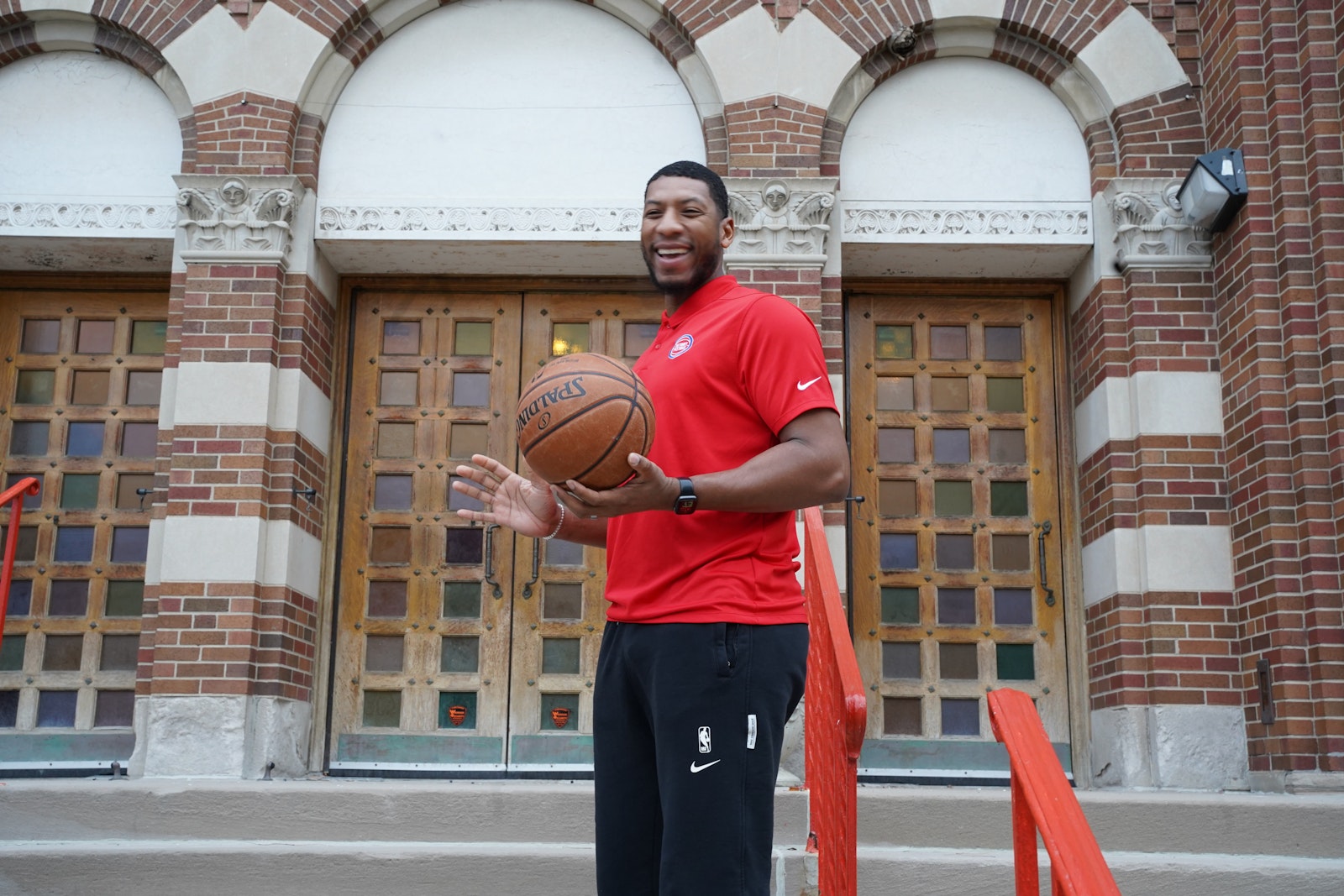 Jones said he's choosing to become Catholic to be a better husband, father and leader for his family. "If I truly want to be and leader for my family, then I have to be one with the faith and God,” he said.

“Fr. John and I have a great relationship,” Jones said. “He understands better than most about scheduling and patience. He’s been great in creating schedules around both of our daily lives — him being a father to many, and me being a father of three and a coach to quite a few guys as well as a husband. He’s been great in grace and patience in giving us time for scheduling and being flexible.”

Jones cites his wife and children's faith as the core reason for his conversion, fulfilling his role as a father and spiritual head of the family. The more he studies, he said, the more he appreciates his vocation as a husband and father.

“Those are two roles and responsibilities that I hold dear,” Jones said. “There is a hard realization that despite my love and willingness to lead my family, there is still that eagerness that God comes before that. If I truly want to lead my family, my wife, and children, I have to be one with God first. It can’t be vice versa; that is the big thing. If I truly want to be and leader for my family, then I have to be one with the faith and God.”

Jones, who grew up in Philadelphia, added he didn’t recall seeing many African-American priests, so having someone in Fr. McKenzie from a similar background with whom to build a rapport helped, he said.

For his part, Fr. McKenzie said a big part of his vocation is reaching out to a community that's been affected by past sins of the Church and cultural barriers that haven't been fully overcome.

“It’s not like the Church hasn’t been reaching out to the African-American community, but we continue to lack in simply reaching the Black community through how we speak, preaching and liturgy,” Fr. McKenzie said. “We have to be ready to reach and engage them. That is something we haven’t gotten to wholeheartedly, and that is because we have not recognized the history, the shameful history the Church has with African-Americans.” 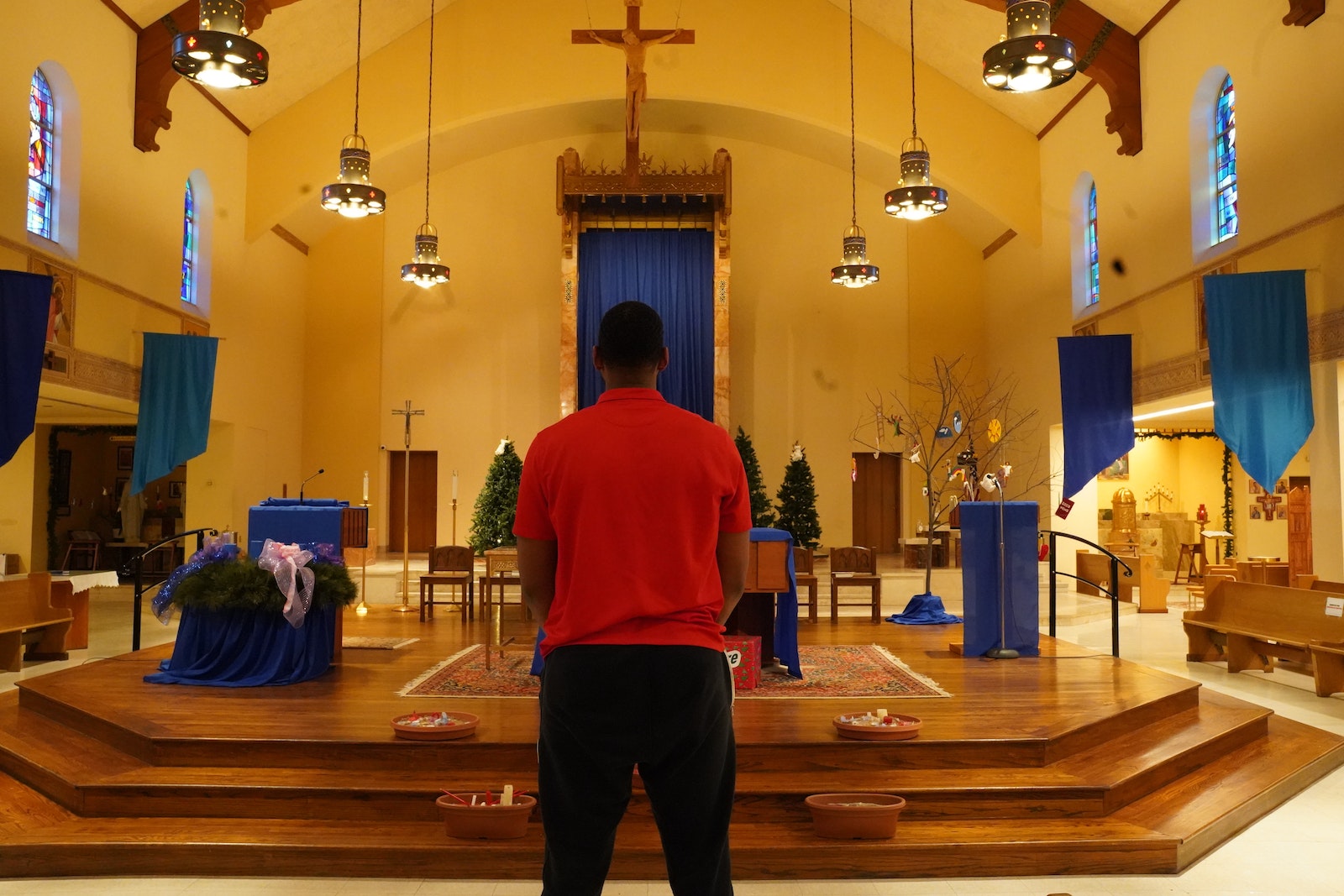 Andrew Jones stands in the sanctuary of Christ the King Parish in Detroit, where he hopes to become a full member of the Catholic faith during the Easter vigil. Jones, who develops young NBA players as the Pistons' director of player development, finds a lot of parallels between his day job and his journey as a member of the faith.

Jones is still learning about the Church, its outreach to the Black community, and his role as a Black Catholic along with his role as a husband and father, but building relationships based on trust and communication are key, he said.

In his role as an assistant coach with the Pistons, Jones specializes in player development, accompanying young players who are getting acclimated to the league and working on the finer points of professional basketball. In the same way, discipleship is about accompanying one another on a journey with Christ, Jones added, developing a Catholic life rooted in the sacraments and the traditions of the Catholic Church.

To that end, Jones sees many parallels between OCIA and the NBA.

“There is a mission in the faith, a mission to rescue people and bring them out of the world and into the Church,” Jones said. “In the NBA, we have a mission as well, to be a leader of men, young men, as you see in the influx of younger players into the league. There is a responsibility not only to lead younger players on the floor, but also to lead them off the floor. I approach my role as a father, a husband, and a man of faith in that way. Looking for leaders to help me develop as a disciple." 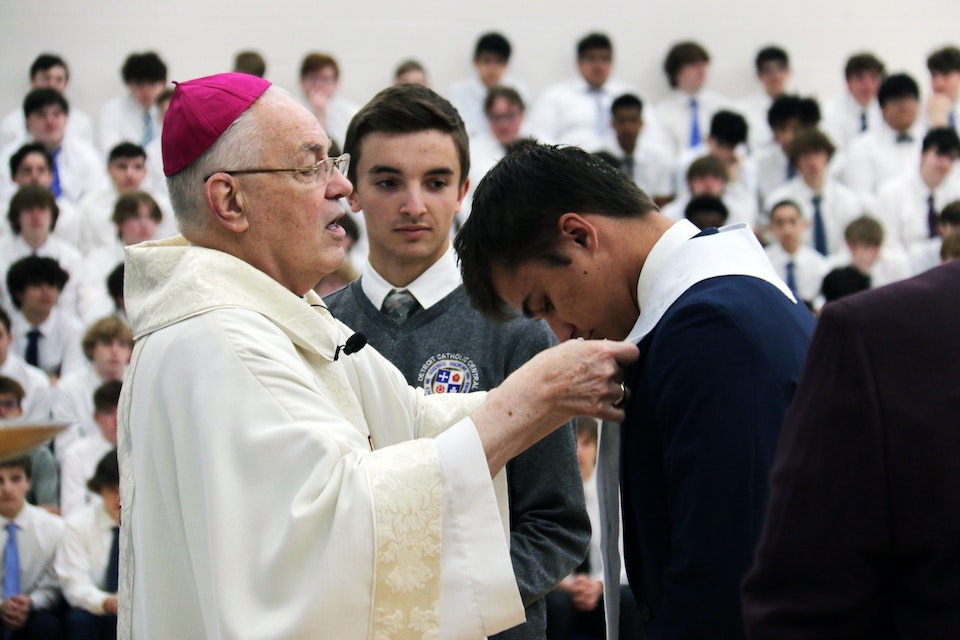 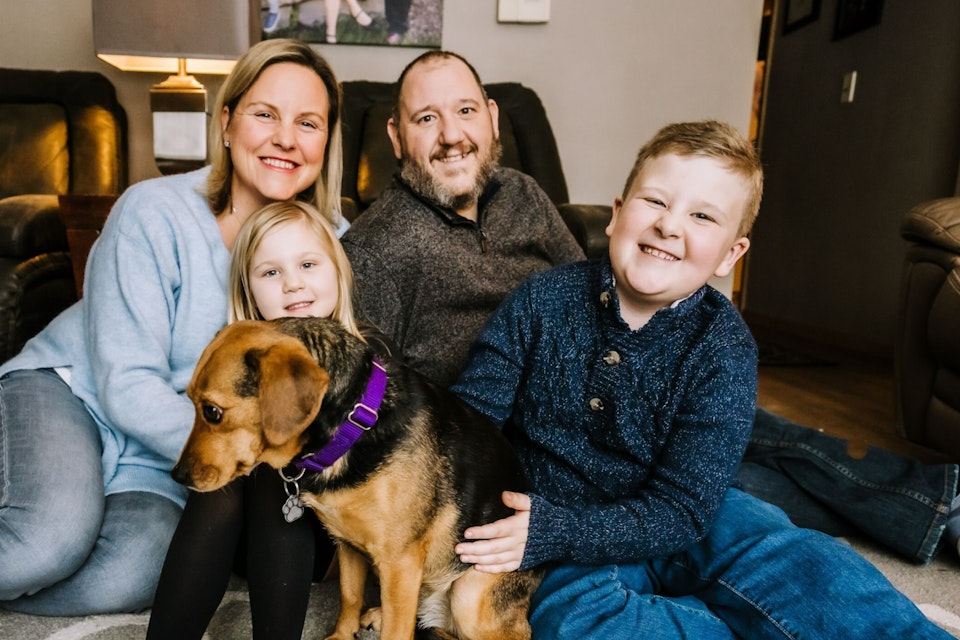 They enrolled in Catholic school because of the pandemic; now, they're becoming Catholic
Conversions