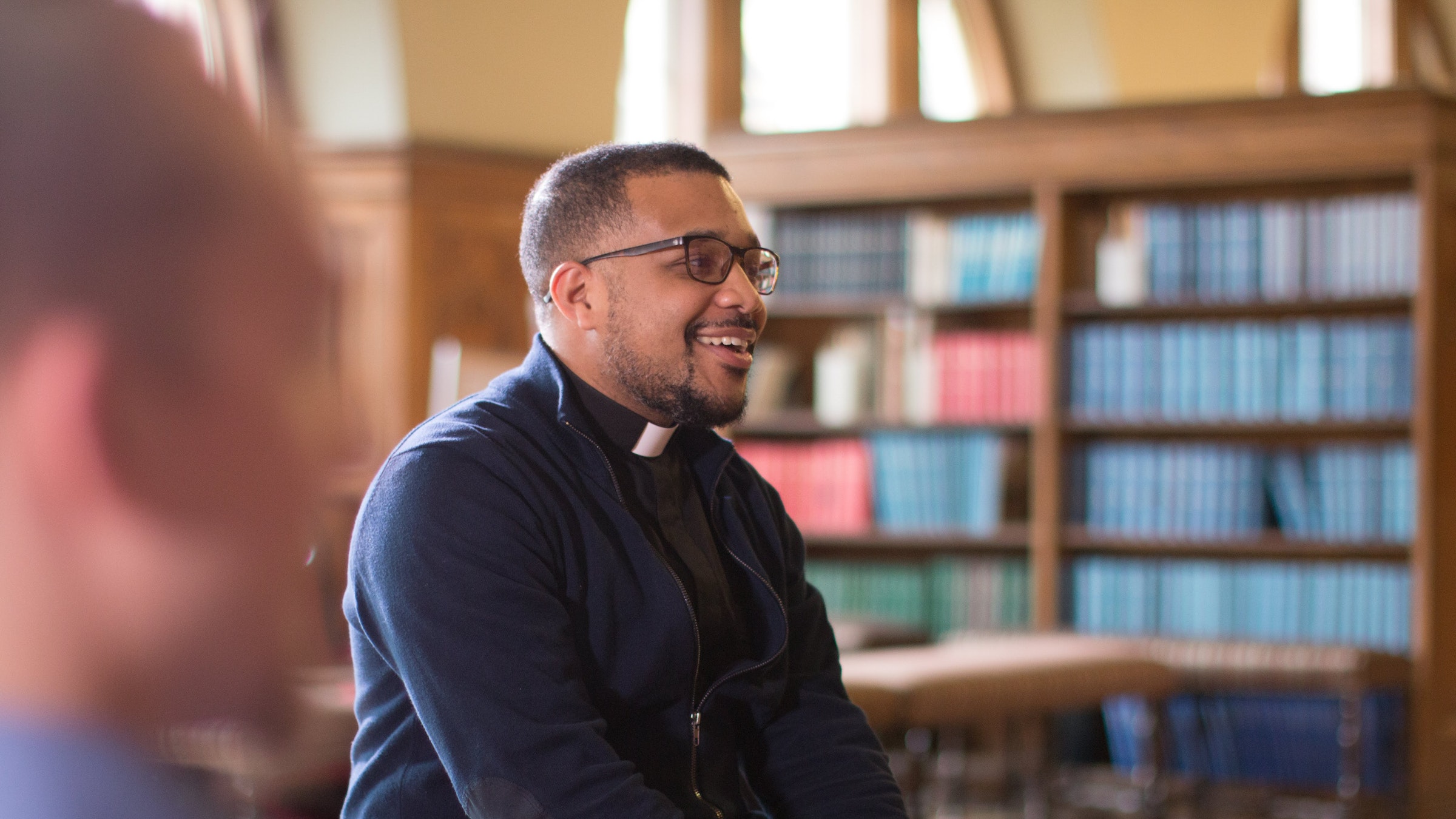 Fr. John McKenzie, associate pastor of the National Shrine of the Little Flower Basilica in Royal Oak, is one of three hosts of the new “Strong Faith - Vital Connections” bimonthly webinar series, which will focus on topics relevant to the African-American Catholic community in southeast Michigan. (Detroit Catholic file photo)

‘Strong Faith - Vital Connections’ webinars to debut June 18 with conversation with Fr. Victor Clore and a ‘Tough Talk on Race’

DETROIT — Amidst the backdrop of a nation that is having frank, and necessary, conversations about race, the Archdiocese of Detroit’s Office of Black Catholic Ministries is opening a new channel in the conversation.

Figueroa is the coordinator of the Office of Black Catholic Ministry, while Fr. McKenzie is the associate pastor of National Shrine of the Little Flower Basilica in Royal Oak. Hall is a member of the archdiocese’s Missionary Strategic Planning team.

The three hosts will share their own experiences in the black Catholic community and will be joined by a guest or expert to provide their own insight into the show’s topic.

“Basically, we want to give black Catholics a platform to learn, inspire each other and grow,” Figueroa told Detroit Catholic. “We’ve inviting everyone in southeast Michigan to join us in our journey as we become strong black Catholic Christians.”

Figueroa said “Strong Faith – Vital Connections” has its roots in the COVID-19 pandemic, when public Mass was suspended and public gatherings were prohibited. Community togetherness and the power of collective prayer are fundamental to the black Catholic experience, and this webinar series is an avenue for black Catholics to virtually gather.

“The African-American community wants to stay healthy, vigilant and make sure we are still in spiritual communion, so we decided to launch this summer series,” Figueroa said. “Then the George Floyd situation hit, and all the other George Floyd-related events, so we decided to have our first one on race, June 18 (with Fr. Vic Clore, pastor of Christ the King Parish in Detroit).”

Hall was asked to join the “Strong Faith – Vital Connections” lineup in order to provide the perspective a younger person with a family. As a strategic planning coach in the Department of Missionary Strategic Planning, Hall works with parishes that have experienced mergers and clusters, especially in the black Catholic community.

“This show is about making sure there are no bystanders. This is a way for people to be easily reached, accompanied and experience healing,” Hall said. “The black Catholic community has been wounded with a huge amount of mergers and closures. This is creating a virtual space to meet them where they are, a new method of evangelization. Sometimes, we feel we only need to evangelize outside the Church, but we need to evangelize inside as well.”

Fr. McKenzie said the webinar follows the principles of the Second Vatican Council, which called for the Church to reach out to those both inside and outside the Church.

“There are more than 33,000 non-practicing black Catholics in the Archdiocese of Detroit,” Fr. McKenzie said. “We need to make sure we reach out to them. For those going to Sunday Mass, we need to reinforce and confirm it. This is a space where the black Catholic community can support one another.”

“Strong Faith – Vital Connections” has episodes planned throughout the summer, covering topics ranging from making Catholic schools accessible to the black Catholic community to addressing the perception that the Catholic Church in the United States is a white Church.

“We think this will be a good way to build community, to keep people connected and build a virtual neighborhood for black Catholics,” Figueroa said.

The Zoom format will have Figueroa, Fr. McKenzie, Hall and a guest on a screen, with participants able to click a link to join the free Zoom meeting on their computer, smartphone or tablet and submit questions for the panel to discuss. Others without a smartphone can still call into the meeting.

Figueroa said the Office of Black Catholic Ministries is working with the archdiocese’s Department of Communications to post the videos online after they are recorded for later sharing and viewing.

“Most people have a smartphone, tablet or a dial-in phone where they can listen,” Figueroa said. “You get to see people, see their smiles, whether something moves them or not. It’s become a very non-threatening way to build community.”

Hall said she hopes the open, easy-to-access format attracts people whose ties to the Church might have grown fractured over the years, from lapsed Catholics to those who attended Catholic school as a child.

“One of the things I’m excited about is reaching out to so many fallen-away Catholics,” Hall said. “There is a huge black Catholic community that attended Catholic schools, but once they closed, that was it. We need to reach out to those millennials, those Gen X-ers in the black community that might be familiar with the Church, but don’t know the Church.”

As an African-American priest, Fr. McKenzie said he is looking forward to adding his own perspective, but also the Catholic Church’s 2,000 years of perspective on the topic of race, and what needs to be done to eradicate prejudice.
“The African-American community and black Catholic community are not homogeneous communities. They are communities diverse in thoughts, philosophies, backgrounds and beliefs, so it’s not as simple as, ‘This is what the African-American community needs,’” Fr. McKenzie said. “As a Church, we need to listen to the issues of today, but we need to guide the discussions with the wisdom the Church has through 2,000 of lived experience.”
“Strong Faith – Vital Connections” has seven episodes planned from June 18 to Sept. 24, but Figueroa said the series plans to continue into the fall, covering a wide variety of topics to foster black identity in the Church and catechize black Catholics in the Archdiocese of Detroit to approach the issues of the day through a Catholic lens.
“We’ve been promoting black ownership (of the faith) and black leadership in the past, but it’s not been consistent; it’s been a one-off,” Figueroa said. “This time we are going for consistency, building skills and leadership and building confidence in people to go out and evangelize.
“We’ve had a lot of virtual activity lately, which has gotten people to go out and engage in their faith, where they feel comfortable going online and making comments to other people,” Figueroa said. “That’s what I want this series to do, to make sure that all Catholics, whether black Catholics or not, can receive that constant enrichment and catechesis in the faith.”

The first installment of “Strong Faith - Vital Connections,” a bimonthly conversation on race, faith and community, will take place tonight at 7 p.m. Fr. Victor Clore, pastor of Christ the King Parish in Detroit, will speak on the topic, “A Tough Talk on Race.”

Several other episodes have been planned, each starting at 7 p.m. (topics subject to change):

To tune in or for updates to the schedule, visit the Archdiocese of Detroit’s Facebook page.