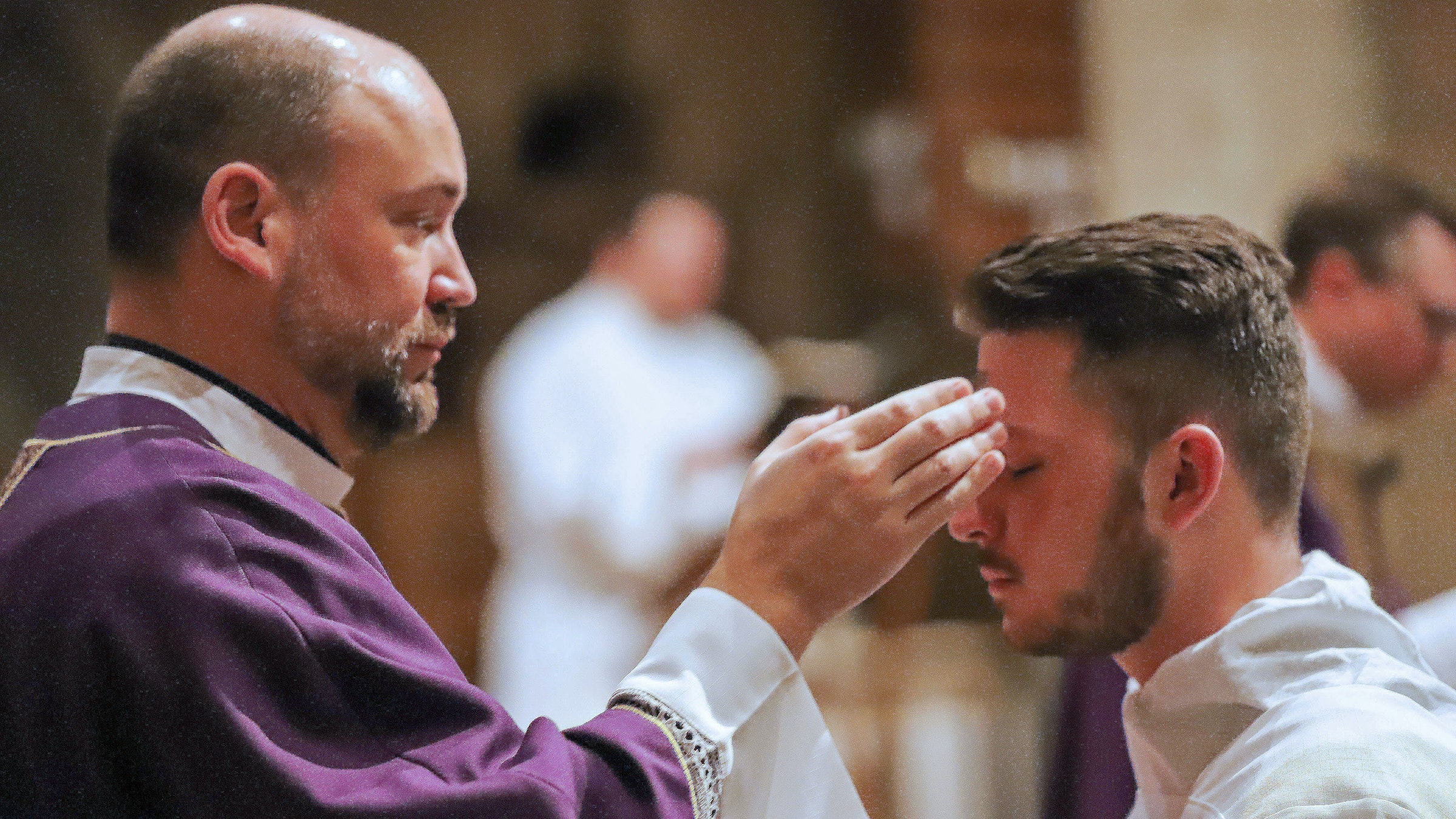 Fr. Stephen Burr, who became Sacred Heart Major Seminary’s 14th rector and president on July 1, blesses a seminarian during a liturgy in the seminary’s chapel. Fr. Burr, 45, said he wasn’t expecting the appointment, but he’s thrilled to succeed Msgr. Todd Lajiness to continue the “great work” of forming leaders for the new evangelization. (Courtesy of Sacred Heart Major Seminary)

A member of the seminary’s faculty since 2008 and its vice rector and dean of seminarian formation since 2017, he loves spending his days teaching, mentoring and praying alongside those studying within the 102-year-old institution’s winding Gothic walls.

He loves the community — eating meals together daily, celebrating Mass, praying the Liturgy of the Hours and venturing into the neighborhood to serve others.

He loves the seminarians, especially watching them grow into the men God intended them to be as they prayerfully discover their vocations.

It’s a part of who he is as a priest.

“Seminary priesthood is a heightened level of spiritual fatherhood,” Fr. Burr told Detroit Catholic. “A priest is always a father to his community, but here we live with the seminarians. We’re always there for them. We’re not only the spiritual fathers, the leaders, the teachers, but also the protectors, the ones who guide and the ones who challenge, just as a father would be to his son.”

Fr. Burr, 45, became Sacred Heart’s 14th rector and president on July 1, succeeding Msgr. Todd Lajiness, who has served in that role for the past nine years.

“I love Sacred Heart. I love its mission,” Fr. Burr said. “I love working with the seminarians, and for those reasons I’m happy to serve in whatever capacity the bishop asks me to serve.”

Ordained in 2002, Fr. Burr has spent a majority of his priesthood within the seminary he once called home as a student. After early stops at St. Andrew Parish in Rochester (2002-05), Divine Child in Dearborn (2005-07) and Our Lady of Good Counsel in Plymouth (2007-08), Fr. Burr was appointed to the seminary’s full-time faculty in 2008 by Cardinal Adam J. Maida.

And he’s enjoyed every minute of it.

“We need priests,” Fr. Burr said. “And not only do we need priests, we need healthy, good, dynamic priests. And this is where we do that, here at Sacred Heart. I want to ensure, through my own ministry and through the priests that I work with here, that we do everything the Lord guides us in our power to do.”

A new leader in a new era

“To be honest, I was surprised, mostly because I didn’t expect Msgr. Lajiness to be moving into another role,” Fr. Burr said. “But I’m very happy for him, and I’m happy to serve because I love this place.”

While Fr. Burr hasn’t had time yet to formulate a long-term vision, he knows he wants to build on the foundation Msgr. Lajiness and others have set for Sacred Heart’s future.

“Sacred Heart is a great seminary, and we’ve done great work in formation. We have an outstanding intellectual life here with an outstanding faculty,” Fr. Burr said. “First off, I want to make sure all of the good work that’s been done by Msgr. Lajiness and others who’ve come before him is maintained.”

As a leader, Fr. Burr said his primary job is to listen to the Holy Spirit.

“I know that God will guide us. If I have a philosophy on being a leader, it’s to be open to God's will and to see where He wants to take us,” he said.

Sacred Heart educates and forms seminarians for 13 dioceses — including six of Michigan’s seven dioceses — and three religious communities, with 114 seminarians enrolled last fall. Fr. Burr said it’s a great blessing that so many bishops send their men to be formed in the Archdiocese of Detroit, and a responsibility he doesn’t take lightly.

“These bishops are entrusting us with their men, and that’s a great relationship of trust,” Fr. Burr said. “We keep in close contact with vocation directors and bishops, making sure they know the men’s progress and can track their formation. It keeps the building very lively with the number of men we have here in a big, healthy community.”

As rector, Fr. Burr also will oversee Sacred Heart’s lay formation programs — a new responsibility for him — a critical part of the Archdiocese of Detroit’s future.

“As the archdiocese begins its shift toward Families of Parishes, we’ll be ready to recruit and train lay ministers to assist in parishes,” Fr. Burr said. “That’s one of the ways we’re here to serve the diocese.”

Like most U.S. seminaries, Sacred Heart forms priests in the human, spiritual, intellectual and pastoral traditions of the Church. It’s not just about knowing the material or being well-rounded, but truly living as men of God, Fr. Burr said.

“We want to instill virtue in the men,” Fr. Burr said. “We want them to be healthy men, men of prayer who are not only establishing a relationship with God that’s rooted in their life, but that they know how to live with Him.”

In order to do that, spending time as a community of faith is essential, he said.

One tradition Msgr. Lajiness implemented was regular “family dinners,” in which seminarians and faculty share meals together on a regular basis, Fr. Burr said.

“Msgr. Lajiness has been a really caring father for the seminary. He’s been generous with his time and leadership, and I definitely want to model that,” Fr. Burr said. “It’s been a great experience, to bring the men together like that. I wouldn’t dare to lose that. We’re better for it.”

Not only do friendships develop while living, learning and praying together daily, Fr. Burr said, but the seminarians can foster a sense of shared mission through experiences such as the seminary’s annual trip to Washington, D.C., for the March for Life, Spanish-language immersion programs in Latin America, and pilgrimage opportunities to the Holy Land and various shrines and Catholic sites.

“As humans, we’re communal people,” Fr. Burr added. “We need that support and friendship. And all of the men here have the opportunity to develop with their brothers rich and God-focused friendships.”

Learning to trust the Lord

Fr. Burr has experience in parish ministry — he also was pastor of Presentation-Our Lady of Victory Parish in Detroit from 2017 until this year — but something about seminary life is special, he said.

Along with being good mentors and models of prayer for the seminarians, every priest who serves as a formator at Sacred Heart has a sacred responsibility, according to Fr. Burr.

“Our job is to care for (the seminarians), to love them and to be priests for them,” Fr. Burr said. “If we can be an image of God the Father for them, then we’re doing our work as formators.”

Fr. Burr said he and his fellow priests and formators — including Fr. Charles Fox, Sacred Heart’s new vice rector and dean of seminarian formation — will make it a point to spend face time getting to know students, living and teaching alongside them, creating a holy environment where faith and trust can flourish.

“The men know that we’re around. We spend time with them in the regular routine of our day in our prayer, in the classroom, in formation sessions and all of these moments. And we’re happy to be with them because we want good, happy, healthy, holy priests for the Church,” Fr. Burr said.

In his prior roles, Fr. Burr served as a mentor to undergraduate seminarians, so he knows firsthand how crucial first impressions can be for a young man entering the seminary for the first time.

The most important thing is to understand that God is trustworthy, Fr. Burr said. And it’s up to the seminary to reinforce that.

“The first thing a new seminarian can learn is that if they’ve heard a call to the priesthood, even faint, it’s worth exploring,” Fr. Burr said. “That’s the biggest hurdle. When you first hear a call from God, it can seem strange, but you can always trust God.”

Regardless of whether a seminarian leaves as a priest, Fr. Burr said no time spent within Sacred Heart’s walls is wasted time.