Not in Washington for March for Life events? Here's how to participate at home 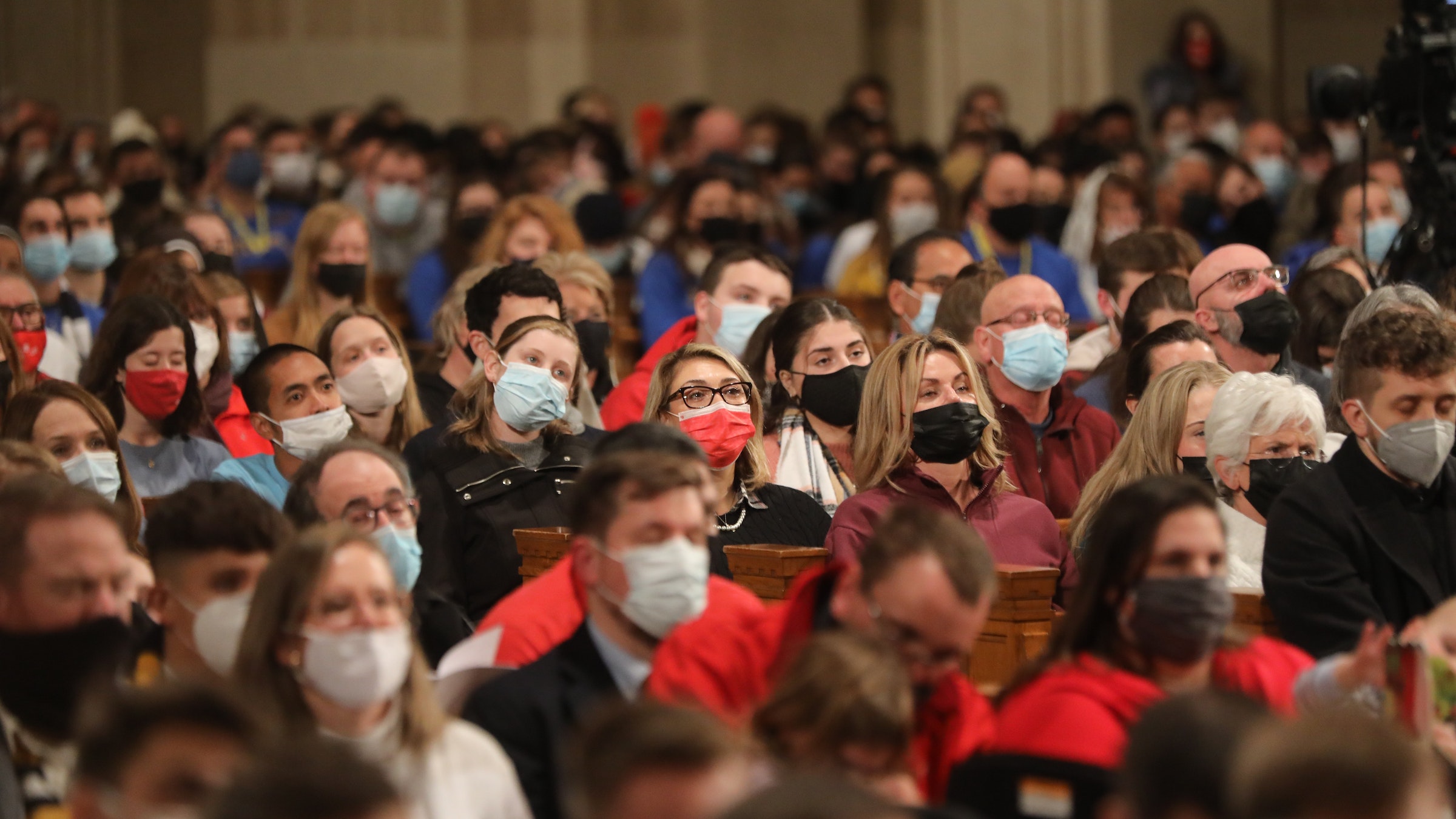 Pro-life advocates attend the opening Mass of the National Prayer Vigil for Life Jan. 20, 2022, at the Basilica of the National Shrine of the Immaculate Conception in Washington. (CNS photo/Bob Roller)

WASHINGTON (OSV News) -- Not in Washington for the 2023 March for Life? Have no fear. Pro-life advocates from around the country can mark the 50th anniversary of the U.S. Supreme Court's 1973 Roe v. Wade decision by virtually participating in events being held in the nation’s capital in conjunction with the national march.

The opening and closing Mass of the National Prayer Vigil for Life Jan. 19-20 in the Great Upper Church of the Basilica of the National Shrine of the Immaculate Conception will be livestreamed at www.nationalshrine.org/mass.

An all-new morning rally, Life Fest, sponsored by the Sisters of Life and the Knights of Columbus, takes place Jan. 20 from 7:30-10:30 a.m. EST and can be followed at www.lifefest2023.com.

The National Prayer Vigil for Life is hosted by the national shrine, the U.S. Conference of Catholic Bishops’ Secretariat of Pro-life Activities and The Catholic University of America's Office of Campus Ministry.

The vigil "is a time to praise God for the great gift of the recent Supreme Court Dobbs decision, overturning the tragic Roe v. Wade decision made almost a half-century ago," said Kat Talalas, assistant director of pro-life communications at the USCCB.

In its June 24 ruling in Dobbs v. Jackson Women's Health Organization, the court reversed its prior jurisprudence in its Roe decision, which had declared abortion a constitutional right.

"State and federal legislators are now free to embrace policies that protect preborn children and their mothers," Talalas said in a statement. "Yet, there is still a great need for prayer and advocacy from the faithful, as there will be intensified efforts to codify Roe in legislation and policies at the state and federal levels."

The opening Mass for the vigil takes place at 5 p.m. EST Jan. 19 with Bishop Michael F. Burbidge of Arlington, Virginia, chairman of the USCCB's Committee on Pro-Life Activities, as the principal celebrant and homilist.

The Mass will be immediately followed by a Holy Hour for life. This will start off a series of nationwide Holy Hours throughout the night broadcast from dioceses across the country listed on the USCCB's website, www.usccb.org.

The nationwide vigil concludes at 8 a.m. EST Jan. 20 with a closing Mass to be celebrated by Auxiliary Bishop Joseph L. Coffey of the U.S. Archdiocese for the Military Services.

Life Fest is a three-hour rally taking place ahead of the National March for Life at the 4,200-seat Entertainment & Sports Arena in Washington. The welcome begins at 7:30 a.m. (EST), and the event will feature speakers, music, Mass and Eucharistic adoration.

The speakers include Sister Bethany Madonna of the Sisters of Life; Sister Mary Casey, who also is a Sister of Life, and her twin, Casey, who has Down syndrome; David Scotton, who was placed for adoption after his birth mother left an Indiana abortion clinic in 1993; and Tricia and Pete DeMaios, who work to educate people about the suffering inflicted by abortion by sharing their own story about abortion and the toll it took.

Singer and guitarist Father Isaiah Hofmann, a Franciscan Friar of the Renewal, and worship leader and songwriter Sarah Kroger will perform for the crowd.

In a Dec. 20 news release announcing the inaugural event, the Sisters of Life and the Knights of Columbus said their hope is Life Fest will "inspire and educate a new generation on the next steps for a new spirituality of love and life, one foundational to building a culture of life in the post-Dobbs era."

"We see a profound opportunity to build the culture of life in a new way," said Sister Maris Stella, a Sister of Life. "We want to serve the church in her most urgent need -- that of the cause of human life, sharing the good news of God's plan for life and love."

Supreme Knight Patrick Kelly called the end of Roe "a crucial milestone, but we should not mistake the ruling as the end of abortion. The fight to protect life will now evolve at the state level but a united stand before national lawmakers is still essential."

Kelly noted that 50 years ago the Knights helped launch the National March for Life, which has become "the largest annual human rights demonstration in the world."