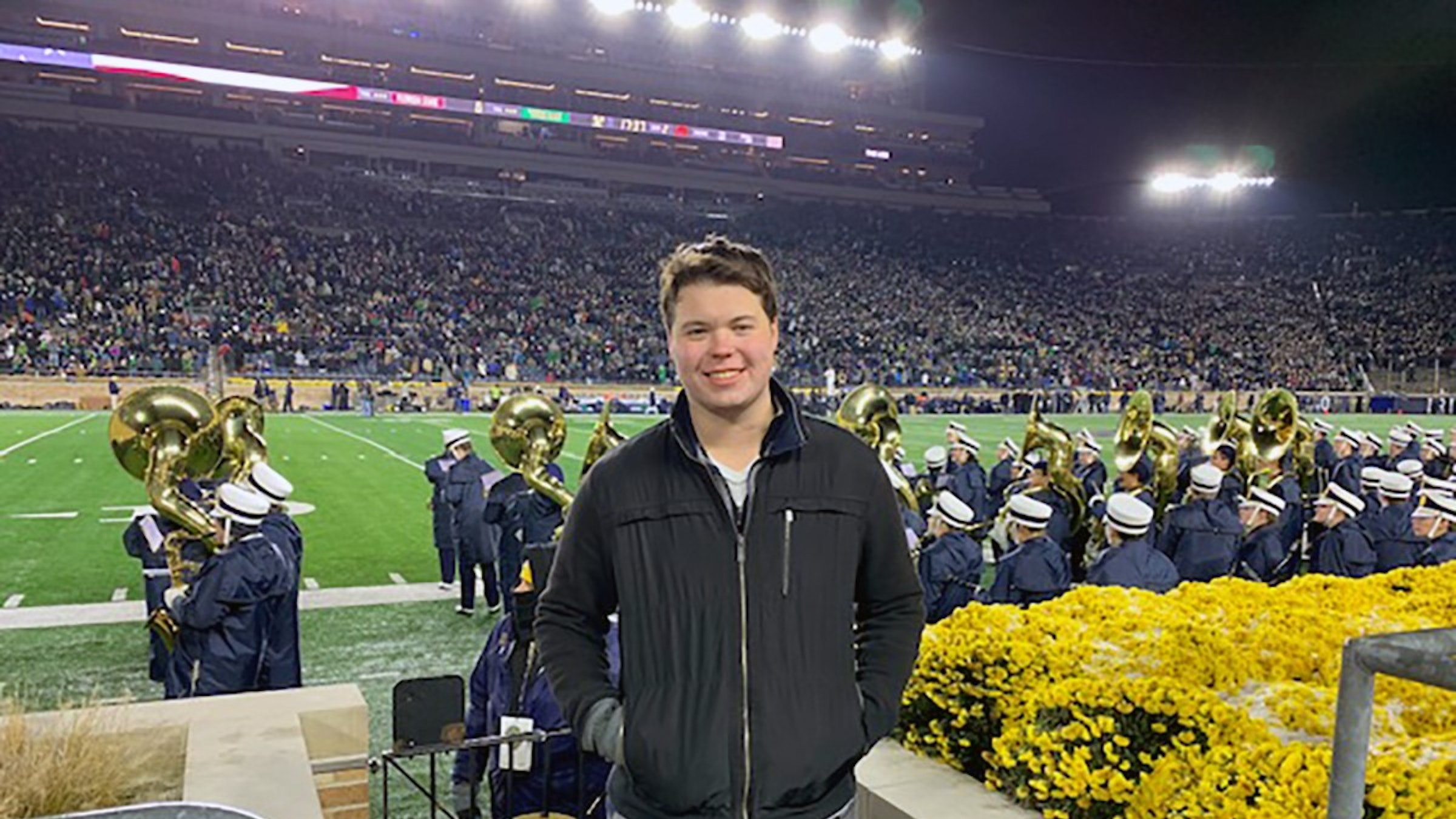 A scholarship offered to current Notre Dame students carries the legacy of a 2017 alumnus who represented “everything the school stands for,” says one of his classmates. Candidates for the David A. Molnar Endowed Scholarship are nominated by Notre Dame Prep's faculty and staff. Molnar, pictured, was a big fan of University of Notre Dame football. (Photos courtesy of Mike Kelly)

PONTIAC — In 2020, the family of Notre Dame Preparatory 2017 alumnus David Molnar established the David A. Molnar Endowed Scholarship to honor Molnar’s life and to provide support to Notre Dame students who have demonstrated resilience and courage in overcoming challenges.

According to David’s father, Robert Molnar, the scholarship also commemorates the positive impact David made on his family’s lives and those who knew him. David died suddenly in November 2019 at the age of 21.

“David was afflicted by acute onset epilepsy at the age of 11,” his father said. “For many years he endured unpredictable seizures that dramatically altered his teenage years, a time that is usually filled with a multitude of activities and social experiences. He desired to live a normal life despite the fact that his epilepsy made his life extraordinary and significantly limited his ability to truly enjoy the freedoms that all teenagers covet.”

Robert stressed that his son was determined to beat this health enemy no matter what obstacles he had to overcome.

“David always strived for perfection and worked harder than most while managing his affliction with a quiet grace,” he said. “He rarely spoke of his epilepsy, likely due to the fact that he wanted to be seen and treated just like everyone else. His perseverance, optimistic attitude, wonderful sense of humor, and passion to overcome his condition was courageous and inspiring.”

“Having lived through what David endured and having witnessed his courage and faith, our family wishes to distinguish those students who carry a burden but who do not let it define them and who give extra effort in fighting through adversities that many others do not realize,” his father said. “It’s tough to be an NDPMA student, as the demanding curriculum and requirements are rigorous and necessitate hard work. To those students who do this while going through additional trials and tribulations that most others can’t even imagine, we salute them and wish to honor their tenacity and work ethic.”

One of Molnar’s classmates who knew him well recalled his friend’s own tenacity and work ethic.

“When I think of my friend David, I am reminded of his strength of spirit,” said Joe Tuski, who also graduated in 2017. “David dealt with very difficult circumstances all while maintaining a great attitude. I am inspired often by his resilience and fortitude, and I’m convinced that his strength was indeed rooted in his faith in God and support from his wonderful family and friends. David will be in my heart always, and his memory will continue to make me grateful for my own blessings.”

Dan Staniszewski (’02) is a longtime math teacher at the school and remembers his former student well.

“David was one of the kindest people you could ever meet,” he said. ”He always wanted to learn more and understand everything better. And David lived the mission of the school. If we had more people in the world with David’s kindness and character, the world would be a much better place.”

Another one of Molnar’s high school instructors was Melissa Archer, who teaches English at Notre Dame Prep. She’s also a member of the school committee that recommends Molnar scholarship recipients.

“I taught David in his junior-year English course and found him to be a conscientious, hardworking, kind and upright person,” she said. ”He was eager to grow in his academic skills and reacted well to setbacks. Among his classmates, he had many friends and while dealing with his health, he seemed to be enjoying a full life.”

Archer also said she admires the Molnar family for honoring their son with the scholarship.

“What a great act of kindness to lift up future NPDMA students to courageously rise above challenges to fulfill the school’s mission,” she said.

A version of this article first appeared on Notre Dame Preparatory’s website. Mike Kelly is director of marketing for the Pontiac school.