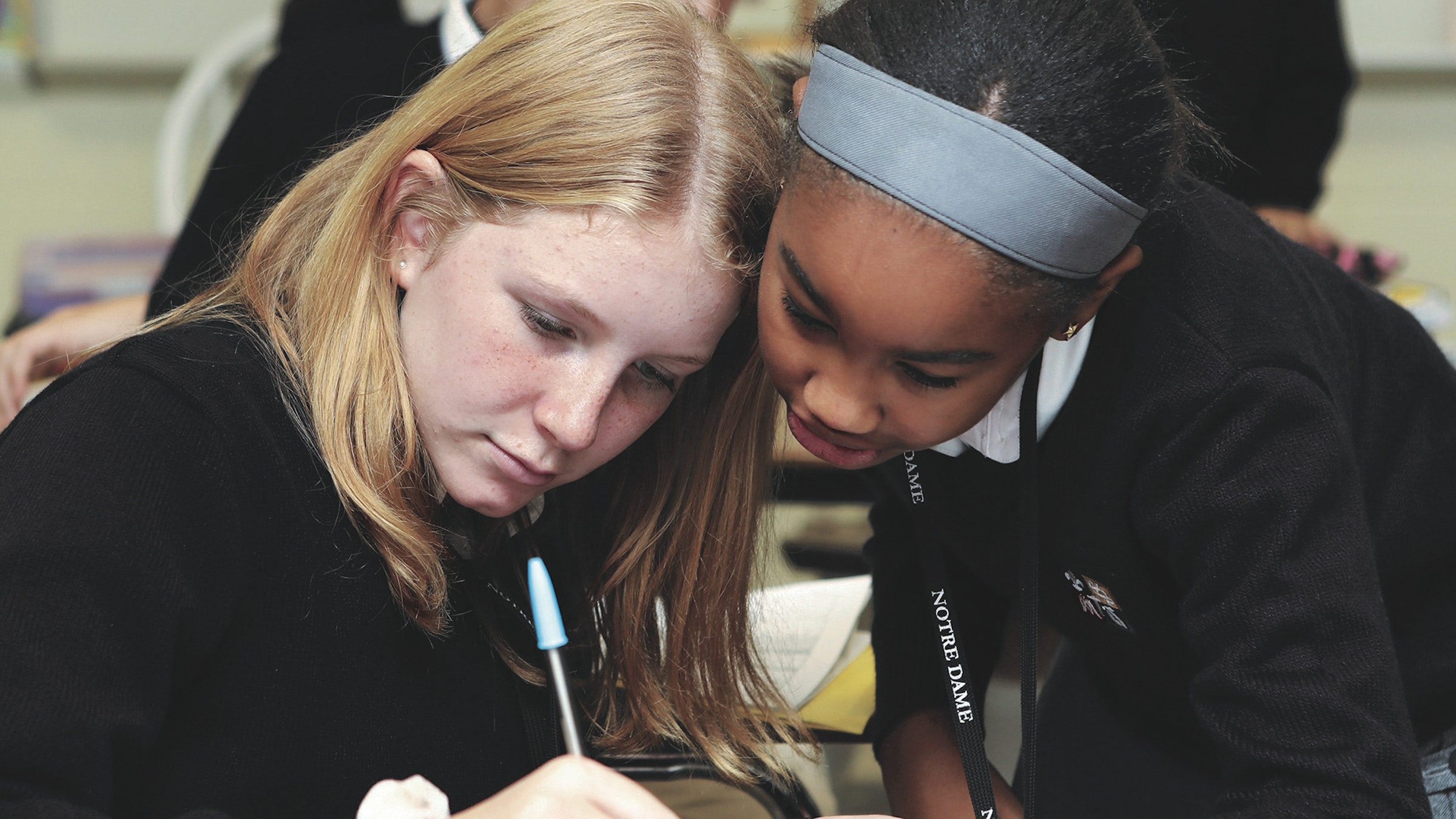 Students at Notre Dame Middle School in Pontiac help each other with a class assignment. For Kala Parker, Notre Dame’s director of diversity and inclusion, bringing the Rev. Martin Luther King Jr.’s legacy into the classroom is a point of emphasis. (Courtesy photo)

PONTIAC — Every year in mid-January, the life and legacy of the Rev. Martin Luther King Jr. is celebrated. For students in the nation’s primary and secondary schools, it’s also an opportunity to learn about and reflect upon what King and his teachings really mean to them as Americans on the cusp of adulthood.

Lesson plans for teachers often revolve around King’s “I Have a Dream” speech, but the movement King helped lead was deeper and much more complex.

For Kala Parker, director of diversity and inclusion at Notre Dame Preparatory School, as well as its lower and middle schools, bringing King’s legacy into the classroom is a point of emphasis.

“As we work toward moving the needle further in terms of diversity, equity and inclusion work at Notre Dame, we’re really striving to make an effort to ensure that we connect all departments and divisions (within the high school and its sister school, Marist Academy) as they all own a piece of this work," said Parker, a 2000 Notre Dame Preparatory graduate.

For the past few years, Parker has worked closely with Notre Dame Prep head of school Andy Guest, campus ministry and with teachers on promoting lesson plans that incorporate inclusion.

“This year, our goal was to continue this dialogue with a specific focus currently on our sixth, seventh and eighth grade classrooms,” Parker said.

To that end, Parker piloted a diversity, equity and inclusion series in the middle school this year to create a comfortable “space” where students can have those types of conversations on a regular basis. She has been working on spending at least two sessions with each grade covering age-appropriate material specific to their needs.

“For the eighth graders, we facilitated an 80-minute class period on allyship, which is the practice of emphasizing social justice, inclusion and human rights by members of an ‘ingroup’ to advance the interests of an oppressed or marginalized ‘outgroup,’ and to not be a bystander,” she said.

Students discussed the “bystander effect,” which is a theory that the more people who are around when something occurs, the less likely someone will take action. Parker focused on the idea that God calls everyone to be their “brother’s keeper” and when one sees something going on that doesn’t feel right, it’s up to each individual to act, whether intervening if safe to do so or letting someone know who can intervene.

Valuing the unique traits of others

“We then focused on certain scenarios in groups to discuss how to take action,” she said. “This semester we are carrying that idea further and talking about the danger of having only a single story of an individual, group or place with the goal of learning that, to be true allies, we must get to know people as individuals and most especially, learning their story.”

For seventh graders in the middle school during the first semester, Parker facilitated two back-to-back community time sessions on identity (”who we are and what's important to us”) and how sometimes people wear figurative masks for a variety of reasons to hide their identities.

“We watched a video about a school in which all the kids wore masks to fit in with particular groups and how some even changed their masks when they hung out with different people or when they saw the ‘mask trend’ change,” she said. “The video’s main character had a unique mask and was sort of a loner, but at the end she removed her mask for everyone to see who she really was.”

The seventh graders discussed with partners, as a group, and then spent the next week focused on who they are and sketching a picture that represents the layers of their collective identity.

“This semester, we will be talking more about identity, appreciating our uniqueness, and valuing the unique traits of others.”

Parker added that upcoming sixth-grade sessions will focus on what it means to be a good friend.

The overall goal for Parker and Notre Dame Prep is to more deeply weave such dialogue into the work the school is already doing around citizenship, advocacy and the school mission.

Mike Kelly is director of marketing for Notre Dame Preparatory High School and Marist Academy in Pontiac. This article first appeared on the school’s website.