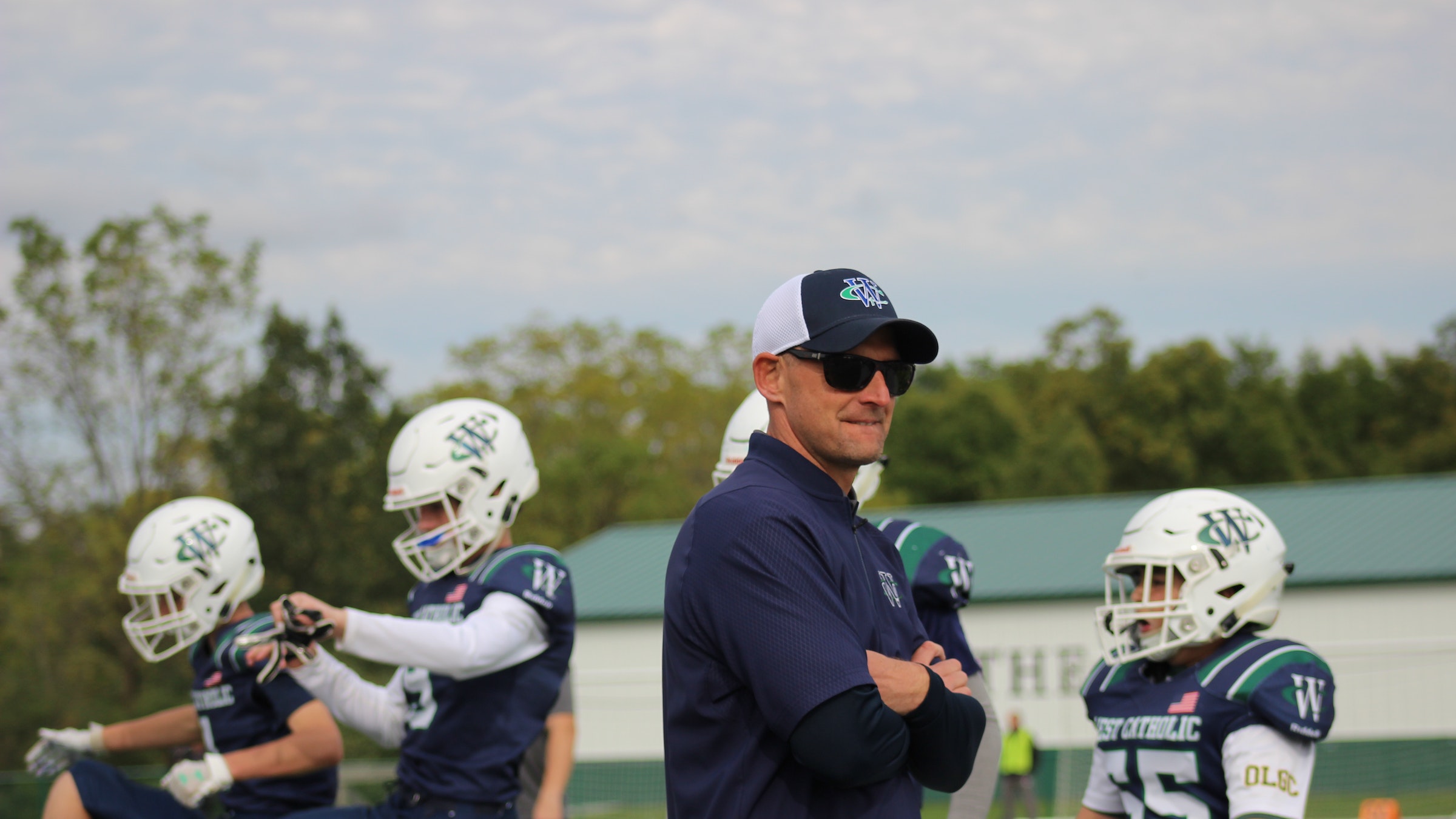 Coach Scott Bobin led West Catholic's seventh- and eighth-grade team to victory in the CYO Prep Bowl in October, but what's more important, Bobin says, is his mission to lead his players to know and love Christ. (Photos courtesy of Scott Bobin)

From prayers before games to encouraging athletes to talk about their faith, Scott Bobin puts truth before touchdowns

PLYMOUTH — A football field might seem to some like an unlikely place for evangelization, but for Scott Bobin, it’s the perfect spot to connect with young people about God’s love for them.

“In my opinion, there is no more shallow entry point than sports,” said Bobin, Catholic Youth Organization football coach for West Catholic, which serves third- to eighth-grade players from 10 parishes in western Metro Detroit. “I say to them, ‘We are going to use the greatest sport ever played to help people encounter the best player that ever lived.’”

Bobin felt the call to get involved in the CYO program in 2010, when he saw a solicitation for coaches in his parish bulletin at Our Lady of Good Counsel. For him, sports are a vehicle to help students from diverse parishes know and worship Christ. Through the CYO program, players can openly share their faith on the field and carry that into their everyday lives, Bobin said.

To that end, West Catholic has developed mentoring programs between coaches and players and between varsity players and freshman players. The goal is to ensure sure all athletes, not just the standouts, can have a one-on-one with a coach to talk about football or anything else that is weighing on them.

“You would think that, especially from a boy’s perspective, they would not be open to talking about Christ, but they want to dive in,” Bobin said.

Bobin prioritizes Catholic identity. He begins and ends each practice with a prayer and invites players to include their intentions. He teaches players that their behavior is a way to pray without words.

“We also always pray with the opposing team at the end of the game,” Bobin added. “We are two different teams but one faith.”

West Catholic follows a national program known as Sports Leader, which believes that teaching virtues builds strength. Bobin, who says the saints are “our football hall of fame,” reminds players and coaches that Catholic identity is more than just showing up to Mass.

“We even had a parish priest who came out to practice to hear (sideline) confessions,” Bobin said. “We had one coach who hadn’t been to confession in 20 years and went to the field confession.”

“We even had a parish priest who came out to practice to hear (sideline) confessions,” Bobin said. “We had one coach who hadn’t been to confession in 20 years and went to the field confession.”

The West Catholic varsity team (seventh and eighth grade) in the A/B division won the CYO Prep Bowl at Ford Field this past fall.

Joey Ramirez, a seventh-grader from St. Edith, said he knows Bobin is not like other coaches, as he demonstrates the value of hard work and discipline through the love he has for God.

“He is super kind and he doesn’t like to yell,” Ramirez explained. “He is very calm about anything that might go wrong.”

Ramirez said the players respect Bobin because he talks to each of them, no matter their position, their amount of playing time or their life situation. And, he added, “In this program, there is a lot of discipline — a lot of discipline.”

Noel Ramirez, a position coach for West Catholic and Joey's father, said Bobin’s charisma helps get parents involved and that he has a knack for gauging players’ strengths.

“He does a very good job connecting with young men,” Ramirez said. “He puts people in places to make them successful.”

Outside of football, Bobin works as an analyst for the federal Department of Homeland Security and is also an adjunct professor at Madonna University in Livonia, teaching criminal justice. He met his wife, Jennifer, when they were both in the Coast Guard Academy, in 2000.

Jennifer is a catechist, and Scott is involved with a Wednesday morning men’s prayer group at Our Lady of Good Counsel, where the couple’s son Jack, 11, is an altar server. The Bobins also have two other children, Abigail, 13, and Blake, 6.

Allen Stortz, a parishioner at Our Lady of Good Counsel and an active member of the Wednesday morning men’s prayer group, said he has been amazed getting to know Bobin, who is his table leader at the breakfast each week, beginning at 6 a.m.

“He comes an hour before and spends time in adoration,” Stortz said. “He’s remarkable and energetic. He enjoys leading. I find him inspiring.”